Bitcoin (BTC) and Ethereum (ETH) mining stocks are increasingly favored by Wall Street, despite their high volatility. The rapid price appreciation in mining stocks such as $MARA and $RIOT makes that evident. $MARA stock saw a 1,854.95% surge, outperforming Bitcoin itself.

According to Coinmarketcap, the global market cap of cryptocurrencies is $2 trillion. Bitcoin makes up more than half of that figure. Some expect the market cap to rise to $5-10 trillion between 2025 and 2030, making investments in top mining companies potentially lucrative. Marathon Digital Holdings and Riot Blockchain are the dominant stocks in the United States crypto mining sector. Hive Blockchain is their new Canadian rival. $MARA has a market cap of $3.5 billion and $RIOT has a $2.8 billion market cap. $HIVE has a much smaller market cap of only $1.3 billion.

As the Bitcoin bull run really took swing in late 2020, most mining stocks surged. Mara is likely the safest bet long-term because it has the largest mining capacity, highest cash flow, and largest Bitcoin reserves. The following is the year-to-date performance for these stocks according to Google Finance:

$MARA provided the highest returns YoY but all mining stocks appreciated rapidly during the latest crypto bull run. $MARA performance is mostly due to their aggressive mining expansion and equipment purchases, positioning them to become one of the world’s largest miners.

What is Marathon Digital Holdings ($MARA) Marathon Digital Holdings is based in Las Vegas, Nevada and its mining facilities are located in Montana and Texas. It is the undisputed king of mining in the United States and produces the highest hash rate of any US-based mining company.

$MARA started as a patent group called Marathon Patent Group and changed its name to Marathon Digital Holdings. Their primary focus is now Bitcoin mining. Marathon stock outperformed every other mining stock with a YoY return of +1,854.95%. $MARA was trading at $1.92 in September 2020 and trades at $35.58 in September 2021.

The Marathon Group plans to open a new mega-mining center in Texas that will house 73,000 ASIC miners. Construction will start in October 2021 and is expected to cost over $70 million.

What is Riot Blockchain ($RIOT) 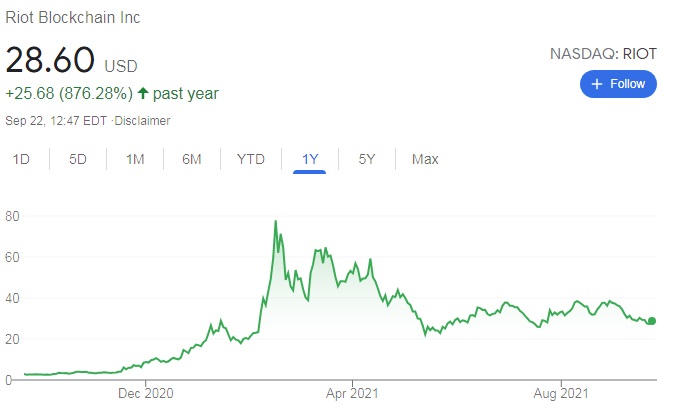 Riot Blockchain is a Bitcoin mining company based in Castle Rock, Colorado. Its mining facilities are located in Massena, New York. It is the second largest BTC mining company in the United States by market cap.

Riot possesses the second-largest ASIC miner arsenal in the United States after Marathon Group. Currently, RIOT possesses over 81,000 ASIC miners. Most of them are S19 Antminers produced by Bitmain with 110th/s performance. This allows them to mine a total of 7 exahash (EH/s). RIOT now has the capability to mine over 2,000 BTC ($100 million) per year.

RIOT expanded its machinery in April 2021 by purchasing 42,000 new S19 Antminers from Bitmain. The deal was worth $138 million and doubled their mining capability. This expansion increased RIOT’s revenue and stock performance significantly.

What is HIVE Blockchain ($HIVE) 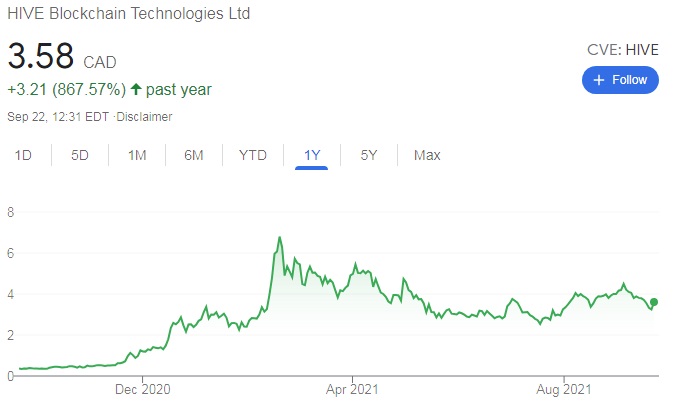 Hive Blockchain is based in Vancouver, Canada, and has regional offices and mining facilities in Sweden and Iceland. It is one of the newest mining companies in North America and stands out by mining cryptocurrencies such as ETH and ETC, in addition to BTC.

While significantly smaller in market cap and mining capability compared to $RIOT and $MARA, $HIVE might provide higher returns as the underdog. HIVE’s share price is mostly tied to that of Ethereum and Bitcoin.

They recently purchased an additional 3,000 miners. This brings their total mining capability up to 24.5 PH/s, or 67 BTC ($3 million) per month. In the third quarter of 2021, HIVE mined over 21,000 ETH ($70 million). Investors who are bullish on Ethereum and DeFi will find HIVE more attractive than Mara or Riot.

The Bearish Case for HIVE Blockchain

The new “London Fork” or EIP-1559, activated in August 2021, poses a threat to mining companies who rely on Ethereum mining for revenue.  HIVE’s revenues are largely derived from ETH mining. In the third quarter of 2021, the company produced 165 BTC ($7.8 million) and 21,000 ETH ($70 million). Their ETH mining revenues are 10x higher than their BTC revenues.

HIVE is currently the world’s largest Ethereum miner and controls nearly 5% of the total Ethereum hash rate, at 3,383 gigahashes per second (GH/s). The company benefits heavily from Ethereum’s proof-of-work algorithm while Ethereum is undergoing an upgrade to a proof-of-stake algorithm.

For comparison, BTC’s proof-of-work algorithm will likely remain unchallenged indefinitely, despite the environmental impact. Mining stocks such as $MARA and $RIOT are safer long term plays with regards to revenue consistency. Ethereum has a very active development team and is actively trying to end proof-of-work and move to a proof-of-stake system.

Moreover, HIVE invested in the company DeFi Technologies and plans to invest heavily in the ETH ecosystem. According to the CEO Harry Pokrandt, at least two years will have to pass until ETH mining is no longer profitable and ETH fully transitions to 2.0.

The market cap of Ethereum currently sits at $400B, while Bitcoin’s market cap is $900B. Investors who are bullish on ETH and see it overtaking BTC as the largest cryptocurrency by market cap should find HIVE a more attractive stock purchase compared to Mira and Riot.

The US government started imposing certain regulations on Bitcoin mining in relation to money laundering. Specifically, the US Department of Treasury imposed blocklists on crypto transactions originating from people blacklisted under the “Designated Nationals and Blocked Persons List – SDN.”

While this is in some sense contrary to the principles of decentralization in crypto, Marathon Group ($MARA) is the only company so far to comply with regulations. Riot and Hive haven’t censored any transactions yet and/or made comments with regards to the blacklists. Investors who want reassurance that their company will not be prosecuted by the US government should choose Marathon over Riot and Hive.

Crypto mining stocks allow Wall Street to play in the cryptocurrency market without actually owning any crypto. The total market cap of crypto may very well explode over the next 10 years, making it bigger than traditional stores of value such as gold. Among the rising giants, the most attractive stock plays are $MARA, $RIOT, and $HIVE.

Each one of these stocks has the potential for great returns, but they’re also sensitive to violent swings in the crypto market. Bitcoin fell below $5,000 in March 2020 and rose to an ATH of $64,800 a year later. This represents an increase of 1,200% from the lowest point to the highest point in a year. During that time, mining stocks mirrored the performance of crypto.

The safest companies to invest technology-wise are $MARA and $RIOT because they primarily mine BTC and the proof-of-work algorithm will likely remain in place for BTC. This is not the case for $HIVE, which relies heavily on Ethereum mining, while the development team pushes for a transition to proof-of-stake.

Investors who are bullish on the Ethereum ecosystem and pin their hopes on ETH surpassing Bitcoin are best off investing in $HIVE. The company will continue expanding their market share in the ETH/DeFi sphere and may become one of the largest players in decentralized finance.

← What Is Cake DeFi: Blockchain Financial Services for the Bitcoin Ecosystem
Supply and Demand of Bitcoin: How Many Bitcoins Exist? →
About