With the impending arrival of the Metaverse, the usage (and therefore value) of non-fungible token (NFTs) is expected to increase dramatically. These blockchain-based creations allow for the encryption of everything from digital items to music, artwork, and even land. As part of this growth in popularity, several new NFT-focused companies have emerged — particularly in the videogame space. Yield Guild Games is one such company and has already amassed considerable support. Its native token, YGG, has a circulating supply of 88 million and a current value of $2.75, for a market cap of $240 million. What Is Yield Guild Games?

Yield Guild Games aims to maximize NFT value across the blockchain-based gaming industry by developing content that allows them to diversify the economic structure of pre-existing digital worlds. The company has even built upon and helped improve the financial ecosystem of other major DeFi platforms, such as Axie Infinity and The Sandbox. Specializing primarily in the investment of NFTs used within gaming, YGG’s primary source of revenue is the sale and rental of company-owned NFT assets for profit (or yield).

How Does the Yield Guild Games System Work?

Key components of the Yield Guild Games system include the following: 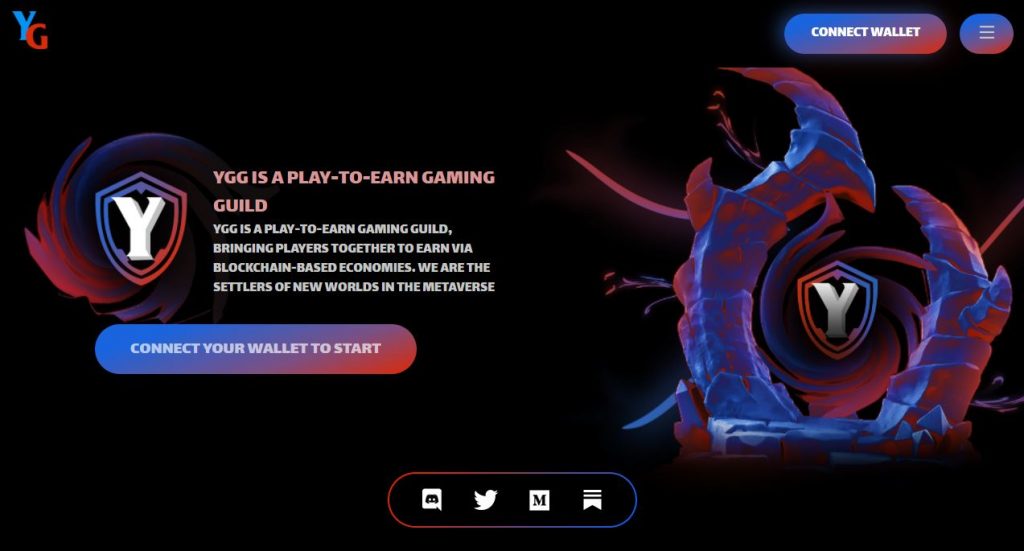 What Is Yield Guild Games Token?

Additionally, Yield Guild Games supplies its own native cryptocurrency, the YGG token (YGG), which is the tool of choice for Guild members especially, but also for other users. This token is responsible for the health and evaluation of Yield Guild Games and all its associated operations; essentially acting as the lifeblood of the company. YGG tokens are distributed as follows:

The Yield Guild Games system is based on a concept called “linear vesting.” This means that participants gain gradual ownership of their tokens over a pre-determined time period, after a 12- or 18-month lock-up during which their assets are frozen. Following this lock-up, YGG members slowly gain full ownership of the value of tokens they have purchased.

For example, if you bought $100 of YGG, you would immediately be given $20 worth. The remaining $80 would be frozen for 1 year, at which point would you begin to receive it, also gradually. In this example, you could expect to own your full investment only after another year has passed.

YGG tokens are distributed as follows:

What Sorts of Gaming Projects Is Yield Guild Games Interested In?

As part of a rapidly expanding market, Yield Guild Games can pick and choose its specialization very carefully, as well as cater to a specific set of needs attributed to their customer base. To gain entry into the Yield Guild Games DAO ecosystem, each gaming project must meet certain conditions:

Who Is Behind Yield Guild Games?

Gabby Dizon, co-founder of Yield Guild Games, was first inspired to create a digital currency platform after observing RuneScape’s effect on Venezuela. Poverty-stricken locals affected by hyperinflation had been mining virtual gold on the platform for profit, in order to provide some much-needed relief from their financial strife.

Additionally, Dizon’s previously co-founded Manila-based studio, Altitude Games, had managed to stay afloat during COVID-19 restrictions by raising and selling creatures on the NFT platform Axie Infinity. Dizon saw further opportunity in this. Shelving the company’s previous ethic of creating free-to-play games, he partnered up with Beryl Li, an innovator who had previously founded the crypto equity platform CapchainX. By 2020, they had successfully combined their efforts into something tangible, and Yield Guild Games was created.

The YGG token saw a fairly steady and incremental rise shortly after its inception in late July 2021, rising exponentially from $2.38 to $8.54 in August 2021 alone. However, it declined shortly thereafter, maintaining an average of around $6.35 from September to mid-November. Very briefly in late November, YGG reached an all-time high of over $10.50. All in all, YGG had achieved pretty decent profits for investors during this entire period, with some early investors netting themselves as much as 10X returns.

Unfortunately, the recent crypto market mini-crash has hit YGG rather hard, and in the only two months that have passed since late November 2021, YGG has seen its value plummet from $10.50 to $3.36 (January 2022), the lowest it has been since the token’s original rise in value way back in August. However, it’s worth noting that declines like this have occurred for even the most stable cryptocurrencies. It therefore stands to reason that this massive drop in YGG’s price comes largely as a result of major movements within the cryptocurrency space in general, rather than from faults in Yield Guild Games itself.

What Is the Future of Yield Guild Games?

The rise of the Metaverse has seen, and will doubtless continue to see, a huge surge in shared online playable spaces and their communities’ activity. This means that the market for services like YGG’s is large and getting larger.

YGG’s involvement in play-to-earn gaming is expected to continue expanding rapidly. The budding company’s portfolio is already impressive, and with the ever-rising number of shared online spaces that meet their criteria, YGG will likely be making crypto headlines again soon.

As pictured below, Google Trends data shows a dramatic increase in the number of web searches for key phrases like “Metaverse,” “Decentraland,” and “Sandbox” (both popular Metaverse shared online spaces in their own right) towards the end of 2021. This kind of data can be a good measure of public interest and, if nothing else, it certainly shows that the concepts YGG is based upon are currently on people’s minds, perhaps more than ever before.

This can only be good news for Yield Guild Games, and other platforms like it, as it gives both developers and investors confidence in the product. The Metaverse is the platform that decentralized currencies (such as NFTs) have long needed. Through its widespread adoption, the future of shared online spaces, economies, and the tokens needed to run them, looks bright.

Simply put, Yield Guild Games and the YGG token have performed admirably since first conceived. Despite the current climate for altcoins, YGG may well return to strong performance in the not-so-distant future. The company has recognized one of the primary failings of most cryptocurrency startups — namely, the lack of inherent value for its native currency. By partnering itself with the gaming world and attempting to capitalize from the possible gamification of cryptocurrencies (like NFTs), Yield Guild Games has rather cleverly given its token a possibility of perceived intrinsic value.

As this new generation becomes ever more drawn into online shared spaces, perceptions of digital asset value improve, in turn driving actual asset value. If you prefer to buy in during a market slump, you may want to look into YGG further — if not now, then certainly during the imminent rise of the Metaverse.