Launched in June 2015, Siacoin (SC) is a currency of Sia, a decentralized cloud storage platform that allows users to rent cloud storage on the Sia network. Siacoin trades at $0.023 per token with a circulating supply of 47 billion, for a total market cap of $1 billion. 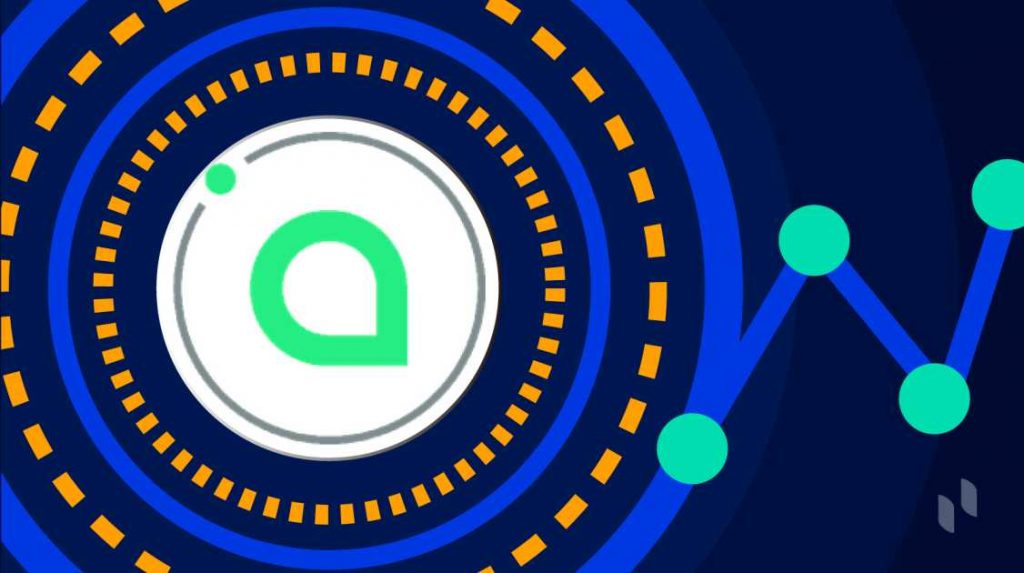 Centralized cloud storage platforms like Amazon or Google are susceptible to outages and hacks, which can sometimes even result in permanent data loss.

Decentralized cloud storage offer solutions to these two problems, and are much more cost-effective. As a result, such solutions have been gaining traction in the crypto space.

Sia, sometimes referred to as the “Airbnb for hard drives,” is like cloud storage provided by Amazon and Google, but backed by blockchain technology. Sia is a decentralized cloud storage platform, which means it doesn’t require its users to put their trust in companies, but rather, information is stored on a network that contains thousands of nodes owned by regular people.

What is a node?

A node is simply a hard drive owned by any person. Anyone with a hard drive can sign up to become a “node operator” and get paid by the Sia network to rent out their storage to other people. All parties pay with Siacoin using payment channels, a technology that’s similar to Bitcoin’s Lightning Network. Network efficiency and scalability are both greatly increased because all transactions occur off-chain in payment channels.

Before a file is uploaded to the Sia network, it is divided into 30 segments that are distributed among hosts all over the world. These file segments use a technology called “Reed-Solomon codes,” which are mostly used in CDs and DVDs. When applied to Sia, these codes create file segments without any loss. According to the Sia team, any 10 of the 30 segments can be used to recover the files. As a result, even if 20 of the segment hosts go offline, the remaining 10 segments will be enough to download the uploaded file.

Unlike centralized cloud storage platforms like Amazon and Google, Sia uses the Threefish algorithm to encrypt all file segments before they reach a host. This means that only encrypted data is stored on the host’s hard drive.

Additionally, all files are sent using a type of smart contract called a “file contract.” File contracts allow hosts and renters to set pricing and manage other factors involved in the relationship between the two parties. File contracts are stored on the Sia blockchain and don’t require any third party or intermediary for enforcement. They usually last 90 days and are automatically renewed by Sia when they are about to expire.

Renters have to prepay for file storage with Siacoin. If a contract isn’t renewed and a host goes offline, any unused coins are returned to the renter and the data is transferred to a new host.

How Does Siacoin Work?

Sia’s decentralized file-sharing capabilities are made possible through its Skynet platform, which Sia calls “an alternative infrastructure for the Internet.” Users control the data on Skynet, which means that websites or apps built on Skynet will not go down unless the users stop using them. All the applications built on Skynet can access each other’s data, and these applications can use the data to implement new and useful changes.

Applications made on Skynet have a two-part URL format. The first part is the Skynet address, and the second part is the address of the portal that facilitates access to the application. An example would be https://hackerpaste.hns.siasky.net/, where hackerpaste.hns is the Skynet address and siasky.net is the portal. The portal runs all the cryptocurrency nodes and transactions.

Most portals use freemium models, which allow users to access the applications, but at a reduced speed. The speed at which the web pages load or files are uploaded or downloaded depends on the user’s price tier. Free users can access paid content, but it’ll take more time to load compared to premium users.

In October 2020, Sia launched SkyDB, a platform where people can create Web3 applications on a decentralized network to store mutable files in decentralized accounts. These accounts can be accessed from any device because they are not part of a single application, but rather an entire decentralized platform.

SkyDB has both private and public files. Private files are encrypted, so they are ideal for cloud storage applications where data security is especially important. One reason why SkyDB is appealing to app developers is because users don’t have to run a server or host a database to make an application work. An application could have over a million users and still cost the developer very little to run. 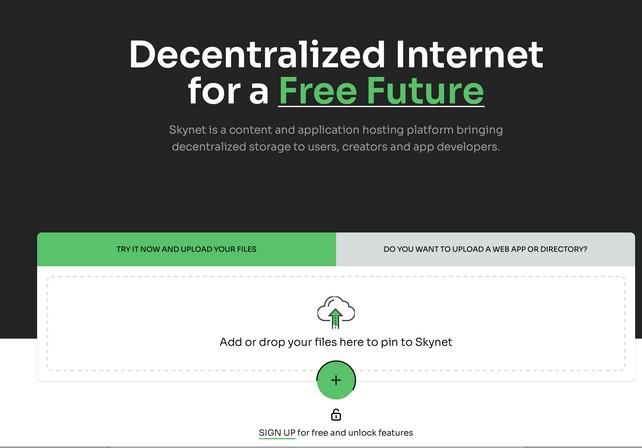 Who Is Behind Siacoin?

David Vorick proposed the idea for Siacoin in summer 2013. When he discussed it over email with Luke Champine, the President and Core Developer of Sia, he called it “the Nimbus Network.” Vorick presented his idea at a HackMIT hackathon in September 2013 and changed the project’s name to Sia, after the Egyptian god of perception, in 2014.

That same year, Vorick and Champine founded Nebulous, Inc, which was rebranded to Skynet in September 2020. The company received initial funding from billionaire Jim Pallotta of Raptor Group, and from companies including First Star Ventures, Fenbushi Capital, and INBlockchain.

Vorick had been working in the Bitcoin core developer community, and what he learned about cryptocurrency during this time naturally carried over to his own project. The team decided to start from scratch, but much of their early work was based on Bitcoin’s development.

It was also during this time that they added storage contracts. Their second whitepaper called, Sia: Simple Decentralized Storage, was released in November 2014. Then, the first public beta version of Sia was released on June 6th, 2015.

Vorick and Champine stated in the whitepaper that the ultimate goal of Sia is to replace centralized cloud storage platforms like Amazon, Google, and Dropbox, all of which are more costly and vulnerable to problems with data security.

At the start of 2021, Siacoin was priced at $0.003. In just three months, Siacoin broke its all-time high in April 2021 when it reached $0.055. Since then, it’s been on a downward trajectory, which can also be said about many altcoins in the market right now. 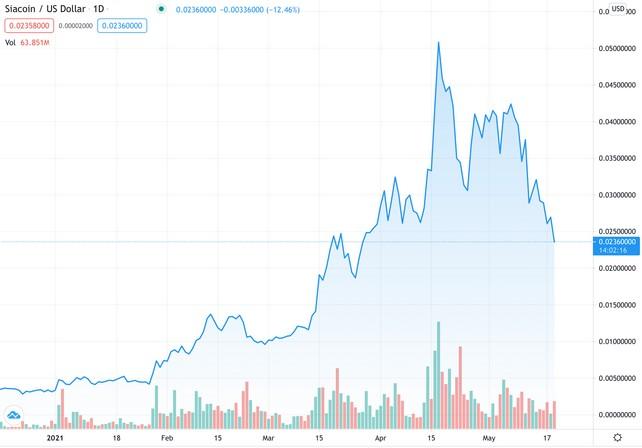 Siacoin’s price will likely continue to increase once the current market FUD ends. The coin has become quite popular thanks to the level of control, ease, safety, and privacy it offers as a cloud storage platform.

Siacoin’s ranking on CoinMarketCap is #91, and it has a market cap of $1.1 billion with a circulating supply of approximately 48 billion Siacoins.

What Is the Future for Siacoin?

In the words of the creators themselves, Siacoin’s long-term goal is “to become the backbone storage layer of the Internet.” Sia aims to replace centralized cloud storages because its creators believe in a “Free Internet.”

Siacoin users have reported a number of issues with things like hosting and wallet usability. However, its future looks promising because it’s a utility coin that makes it easier and safer for people to store their data online.

The team behind Sia recently announced its Spring 2021 hackathon, which features cash prizes of over $25,000. The hackathon is designed to encourage developers to build applications that will allow community members to interact with and share content that they have created.

Cloud storage solutions provided by companies like Amazon and Google are already well-established, which will make it challenging for Sia to convert more users.

Siacoin has been around for seven years and considering that it reached an all-time high earlier this year, it looks like its popularity is only going to grow from here. It gives users full control and fully encrypts all files stored on the network, which makes it great for people who care about privacy. It seems that Sia’s team is always working on something new, and it regularly posts Medium articles to keep its fans updated. The future looks bright for Sia, but only time will tell whether it will indeed succeed as a cryptocurrency.

← What are Parachains: Parallel Computing on The Blockchain
What is Bid-Ask Spread: How it Keeps Crypto Markets Efficient →
About