What is PooCoin: One of The Largest DeFi Analytics Sites

PooCoin (PooCoin) is a DeFi trading analytics website for BNB, Polygon (MATIC), and KuChain (KCC). PooCoin rivals DexTools (DEXT), the primary Ethereum (ETH) DEX analytics tracker. The PooCoin token is currently trading at $1.28, with a market cap of ~$8M and a total supply of 10M tokens. PooCoin is the world’s most visited DeFi analytics website according to Alexa. PooCoin ranks in world’s #1000 most visited websites at #672 while Dextools, its main competitor, is ranked #789. PooCoin even ranks high compared to PancakeSwap (CAKE), the most liquid DEX on the BSC network.

The PooCoin website provides an index for all token contracts on supported networks including real-time buy/sell data, charts, market caps, LP tokens, wallet holdings, and trade widgets. The PooCoin Telegram bot can be implemented on any BSC/Matic/KuChain coin to track price in real-time on a channel.

PooCoin homepage and the PooCoin token.

PooCoin introduced new features to DEX analytics such as value trackers for purchases, instant trading on the platform, and multi charts. The PooCoin bot is commonly used in crypto Telegram groups. Premium features are available on the website that enables tracking of multiple wallets.

Where Did PooCoin Come From?

Ethereum and DEXs such as UniSwap (UNI) started a revolution in the DeFi sphere. Traders were instantly able to swap Ether for ERC-20 tokens and back. The problem was that traders couldn’t track real-time buys and sells for their tokens using CoinGecko and CoinMarketCap or they had to manually check the block explorer.

What was needed was a DEX tracker that showed every buy and sell for every contract on the Ethereum network. DexTools introduced real-time charting with buy/sell analytics but it lacked support for BSC at the time.

As BSC started gaining recognition for its low fees in Q1 2021, the network required their own version of DexTools that would show real-time analytics for BSC contracts. PooCoin was born as a new protocol for PancakeSwap token analytics.

PancakeSwap is the largest and most liquid DEX on the BSC network with over $6B in value locked. The problem is that PancakeSwap is often lagging and slow to index new purchases and sells. The price listed on PancakeSwap could be lagging by several hours or more. PooCoin fixed that by syncing core analytics directly from the BSCscan block explorer and integrating them in their platform. This allowed them to significantly speed up price indexing on BSC and show the real-time transaction for every contract on the network.

The primary feature of PooCoin is the charting. PooCoin has some of the highest retention in any DEX because users spend a lot of time tracking their tokens and watching the buys/sells unfold in real-time.

The entire BSCScan block explorer is indexed and all contracts with liquidity can be automatically looked up. 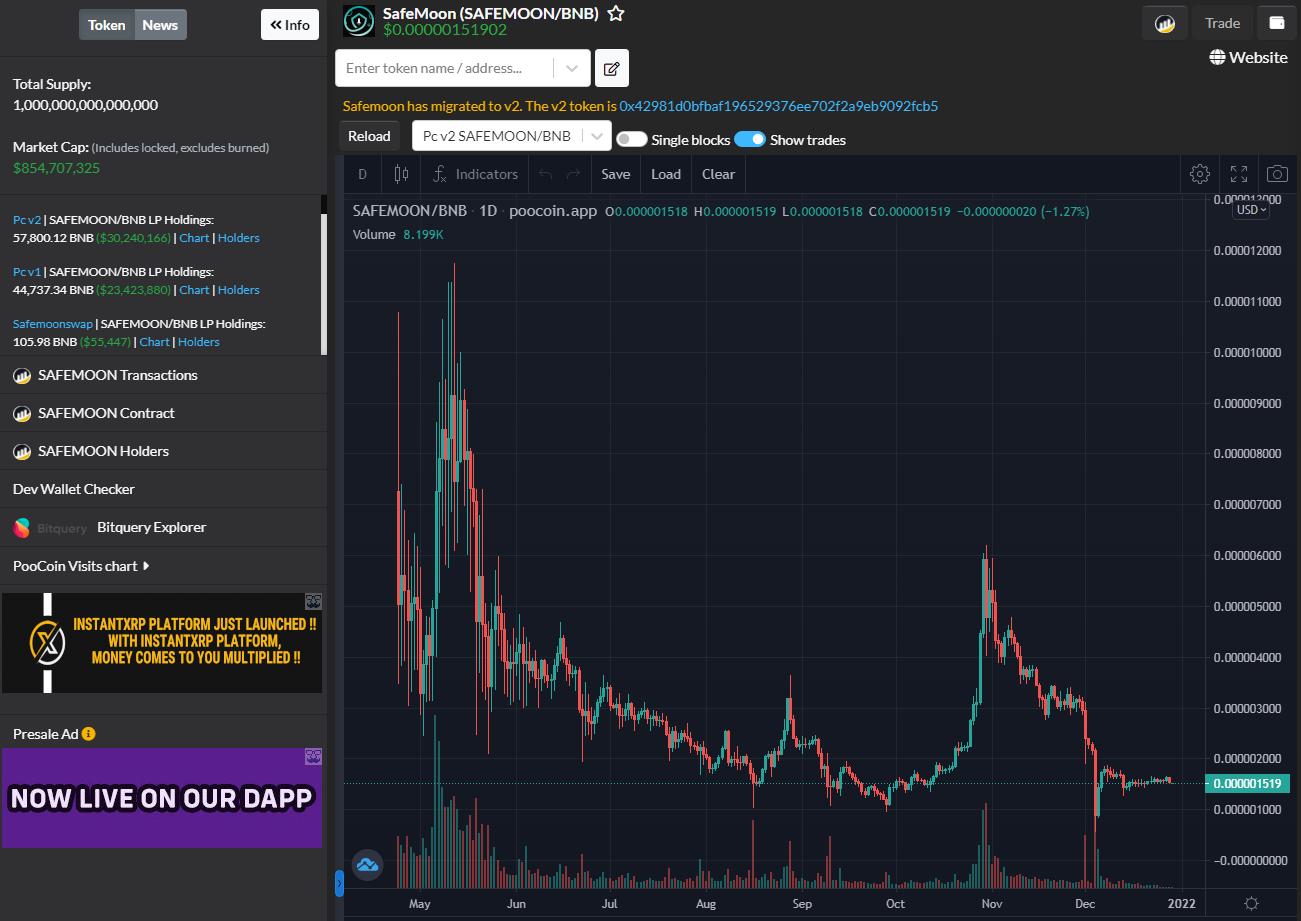 To the left of the token charts, there is core information about the token:

If a user wants to launch their own token on the supported networks, they can add LP tokens on a DEX and locate their contract on PooCoin for real-time analytics.

PooCoin was originally launched for the BSC network, but later introduced support for multiple chains:

Users can switch different chains on PooCoin with a click.

It currently supports the BSC, Polygon, and KuChain networks. A user can click on the top-left to switch the network and connect their wallet.

Below the charts, PooCoin maps out detailed analytics for every buy and sell for that token. This data is derived from the block explorers and will include all transactions on the blockchain:

PooCoin syncs the last 100 transactions for a token.

The transaction IDs (TXID) are linked on the right. If a user clicks on a transaction ID, it will lead them to the block explorer where they can see the transaction detail. This is a helpful feature for tracking large wallets (whales) and seeing which tokens they’re buying and selling.

Under “Wallet TX”, PooCoin lists every buy and sell transaction made by a wallet. A user would have to be connected to PooCoin using a decentralized wallet like MetaMask to make use of this feature.

The “Buyers” and “Sellers” tab keeps track of the largest addresses for that token in a particular time frame. These are whale-tracker features that help small investors see how the biggest holders are trading the token.

This is a list of addresses that placed the largest buys for the SafeMoon token: The top wallet purchased $89M worth of SafeMoon tokens. 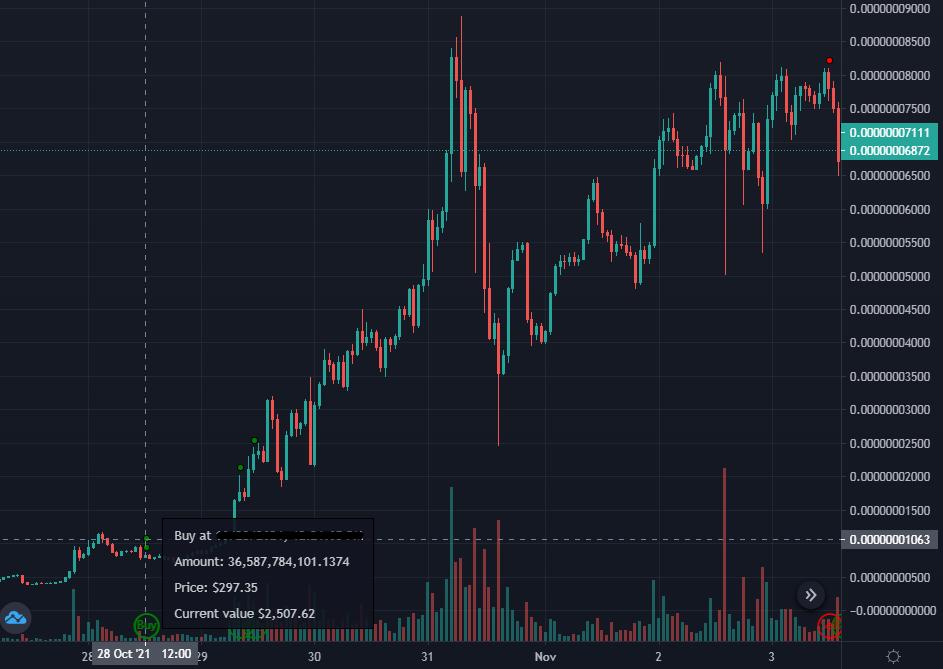 The instant market value calculator for trades on PooCoin.

The same applies in reverse for tokens that lost value. All trades are marked as green or red dots on the chart.

PooCoin has a multi chart option that can show multiple charts simultaneously. Traders who trade multiple tokens can watch the price in real-time without having to open separate tabs:

PooCoin can support up to 9 charts simultaneously. Any contracts supported by PooCoin networks can be listed here without restrictions.

PooCoin tracks the wallet’s balance by showing all tokens belonging to a connected wallet and their value in USD to the right: 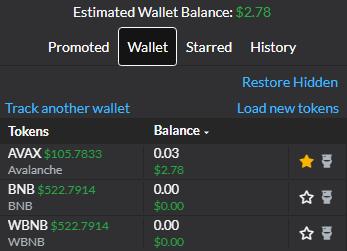 Warning: Users should be aware that airdropped tokens on the BSC network could be dusting scams. If you didn’t purchase a token but found a token with a value of $50,000 or more sitting in your wallet, it could be a dusting attack that could empty your wallet when you trade it.

Users who hold multiple tokens can also “Star” their favorite tokens to separate them out from tokens they care less about.

The PooCoin widget is a token-swapping widget available under every PooCoin chart. Users can instantly buy and sell tokens without visiting DEXs such as PancakeSwap. It automatically routes them through the DEX engine and saves the trader time.

Click on “Trade” above the token chart and the trade widget will appear:

The PooCoin trade widget for instant swaps on the platform.

Developers can embed the PooCoin widget on their website if they want users to instantly trade their tokens. The widget is free to use.

The PooCoin Telegram bot is a free and programmable price-tracking bot for cryptos compatible with PooCoin. 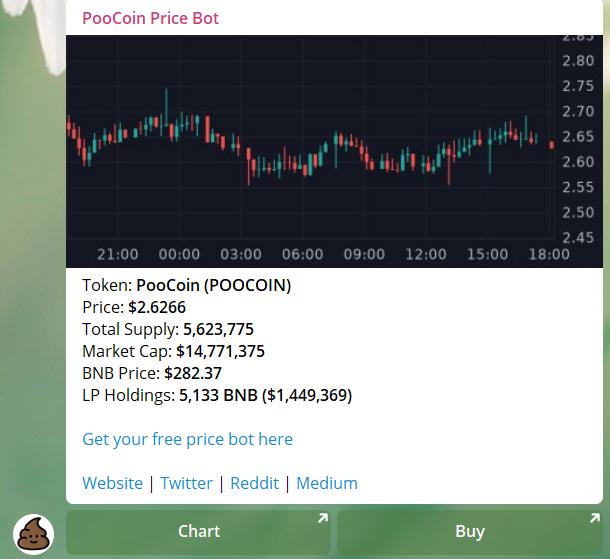 Telegram is the most widely-used application for crypto groups and they can instantly check the price of a token using the PooCoin bot by inputting codewords such as “/price”. This bot can be instantly implemented on any Telegram channel for any token.

There are three premium tiers:

The user can track a wallet that doesn’t belong to them. This will show their balances as if they were their own. This feature is designed to copy whale movements and make profitable trades.

Wallet tracking but the trades are listed on the chart, similar to the user’s own trades.

A user can see trending tokens that received the most views. The user can also adjust the time frame down to the last 30 minutes, alerting them of the hottest tokens on the website.

The PooCoin token is currently trading at $1.28 and has dropped since its $15 all-time-high in April 2021. The total supply is limited at 10M tokens.

An 8% tax is applied on all transactions: 4% is burned, and 4% is distributed to other holders. The highest the allocation of the supply a user owns, the higher their reflection awards. This taxation applies to all transactions including moving the tokens from one wallet to another.

PooCoin appreciated fast when it was launched and listed on sites like CoinMarketCap and CoinGecko. However, it wasn’t able to retain its initial momentum and depreciated to new lows.

PooCoin is the most visited DEX analytics website and receives the most engagement by DeFi traders — even surpassing those of Ethereum analytics sites such as DexTools.

The provocative name of the website and token could be a hurdle to more widespread adoption, as the token is down significantly in price since it launched in Q2 2021.

The PooCoin team has actively worked to bring the features on multiple chains and introduced the most reliable real-time trading for DeFi. The widget and Telegram bot developed by the PooCoin team have been well-received by the crypto community and implemented on many websites and channels.

The DeFi community will be watching what PooCoin brings to the table in the future. The high engagement rate, low token supply, and plentiful features could eventually lead to a comeback for the PooCoin token.