What is Keltner Channel: Best Alternative to Bollinger Bands for Bitcoin (BTC) 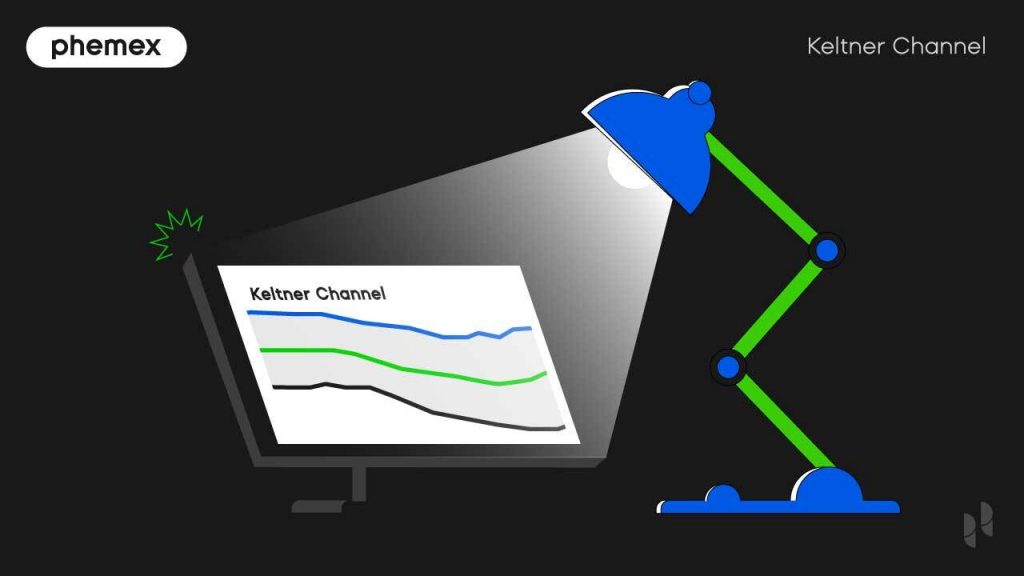 What Is Keltner Channel?

Keltner Channel is an envelope-style trading indicator for Bitcoin (BTC) that surrounds the price candles using three envelope lines. The Keltner bands surround the middle line on the chart by highlighting upper and lower barriers. The indicator can be used on the 1W, 1D, 4H, 1H, and other short-term charts.

The Keltner Channel is based on two other indicators: Exponential Moving Average (EMA) and the Average True Range (ATR). It calculates the average price movement of crypto over a user-specified period with a 20-period average. This means if it’s used on the 1D (daily) chart, it will show an average for the last 20 days. Envelopes are user-defined and vary based on periods.

The indicator is similar to Bollinger Bands (BB), one of the most popular trading indicators. Bollinger Bands is also an enveloping indicator, but its envelope range is higher and it uses standard deviation to calculate the distance while Keltner Channels uses Average True Range. Both can be used in conjunction to give traders context about the price of Bitcoin.

Keltner Channels were exclusively used in the commodities markets for goods such as oil, gas, gold, grain, wheat, and other essentials. When it became more popular, it received adoption in the stock markets, forex markets, and recently crypto markets. The Keltner Channel crypto indicator uses the same measurements as in other markets.

The indicator was reformed in the 80’s by Linda Bradford Raschke, a Californian-based commodities trader. In the original version, the upper and lower envelopes were based on the Simple Moving Average (SMA) and in the newer version they are calculated using the Exponential Moving Average. The EMA places more emphasis on recent data. The Average True Range was also implemented in combination with a 20-period EMA.

Exponential Moving Average is an indicator that measures highs and lows in the price to come up with an average – this is displayed in a line that is different to the current price. The Average True Range is a volatility measurement indicator that tracks price changes based on volatility.

How to Use Keltner Channels?

Let’s use Phemex trading platform for this demonstration. The Keltner Channels indicator is available on 50+ spot and futures markets. We’ll use the BTC/USDT pair: 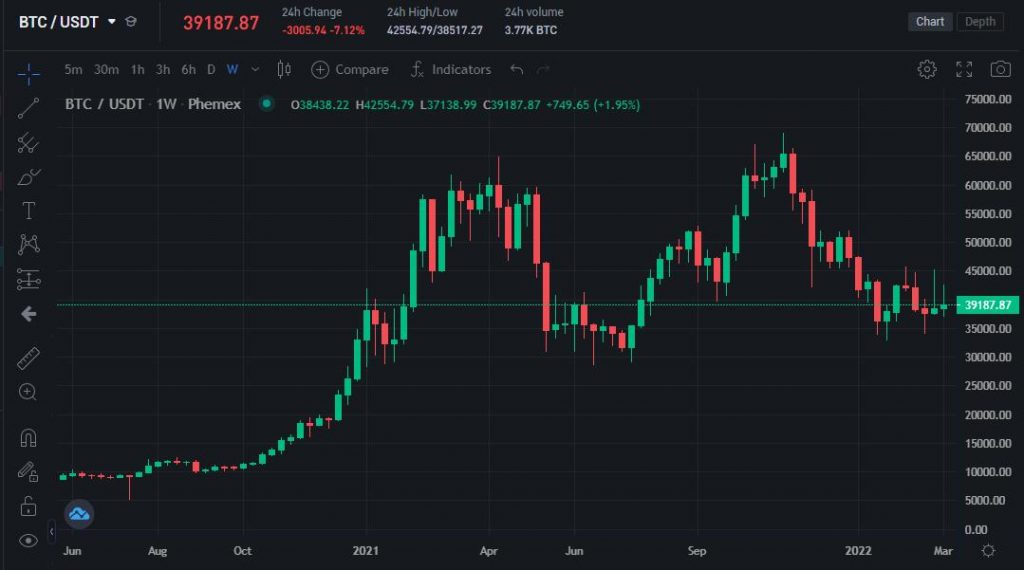 Press on “Indicators” at the top and search for “Keltner Channels”: 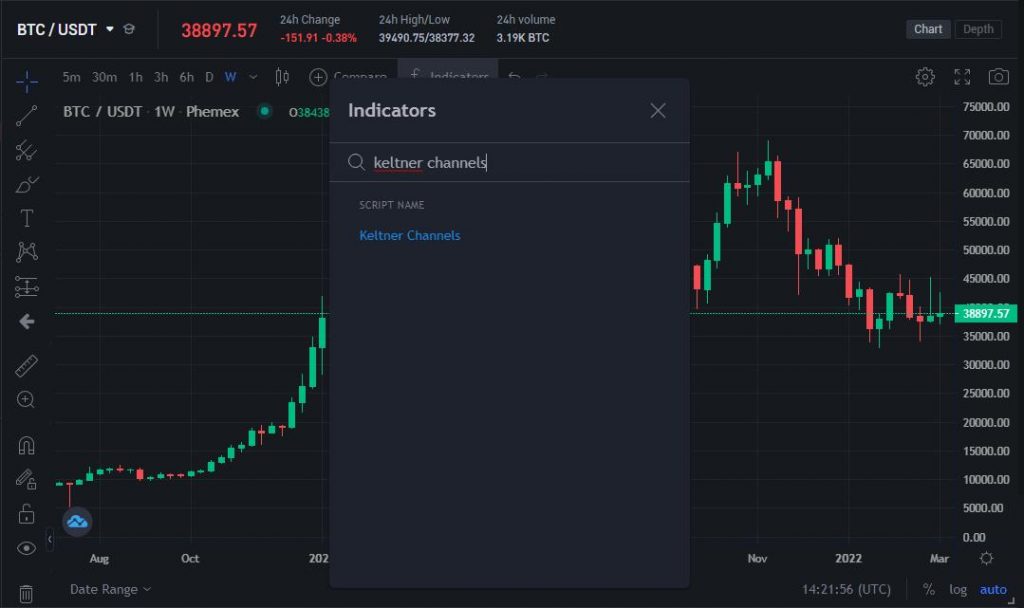 Search among hundreds of available indicators including Keltner Channels.

Left-click on the indicator and it will load on the Bitcoin chart: 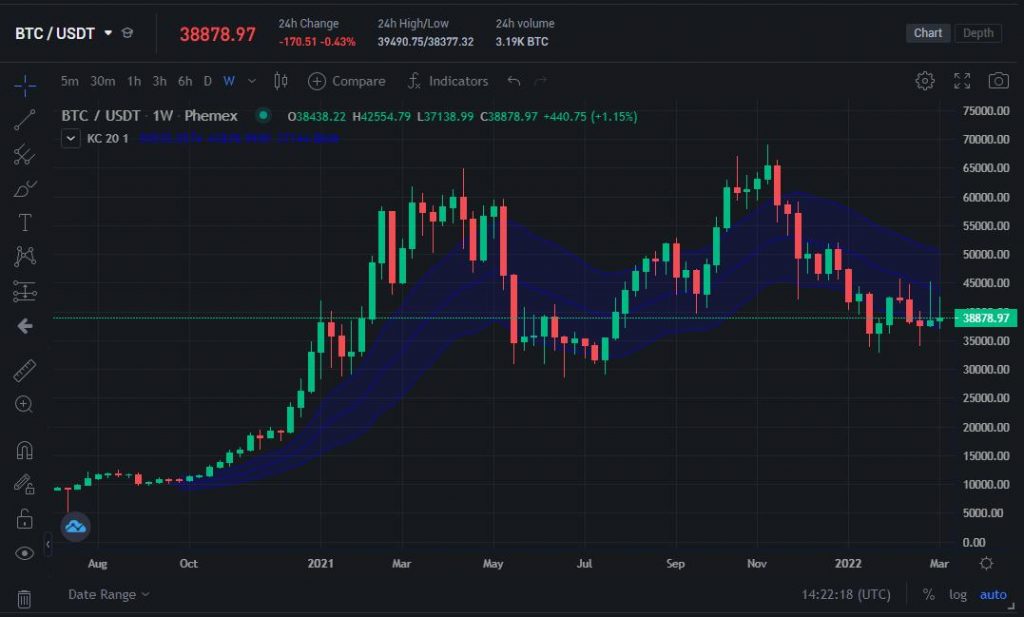 The center line on the chart above is the EMA line. The upper band and lower band are calculated based on the EMA and the default settings. The upper envelope signals resistance levels and the lower band signals support levels.

We are using the 1W (weekly) chart as selected at the top-left. This gives us the best perspective on Bitcoin’s long-term price action. We can see that Bitcoin was trading above the upper band when it rose from $10,000 to $60,000 near the end of 2020 and the start of 2021.

It then reached the lower support bands of the indicator when the price crashed from $65,000 down to $30,000 and climbed through them again briefly from September until November 2021.

At the time of writing, Bitcoin is trading at $38,878. The price being near the lower Keltner band indicates we are trading at critical support levels. We could use this time to open a long position on Bitcoin. Conversely, we can open short it if we believe the price will go down further.

The best Keltner Channel settings for day trading are 20. This gives us a default period of 20 for any chart we choose: Monthly, weekly, daily, hourly, or minute charts. To access the settings, hover over the “KC 20” icon at the top-left of the chart and press “Settings”. This will prompt a window with optional settings: How to set up Keltner Channels: Adjust the time period and the length of the Keltner bands.

The “Length” is the average time period you want to use. If we’re using the daily chart and we have a length of 20, it will measure moving averages over 20 days. The “Mult” stands for multiplier. If we change the multiplier from 1 to 3, it will multiply the range of the bands by 3: 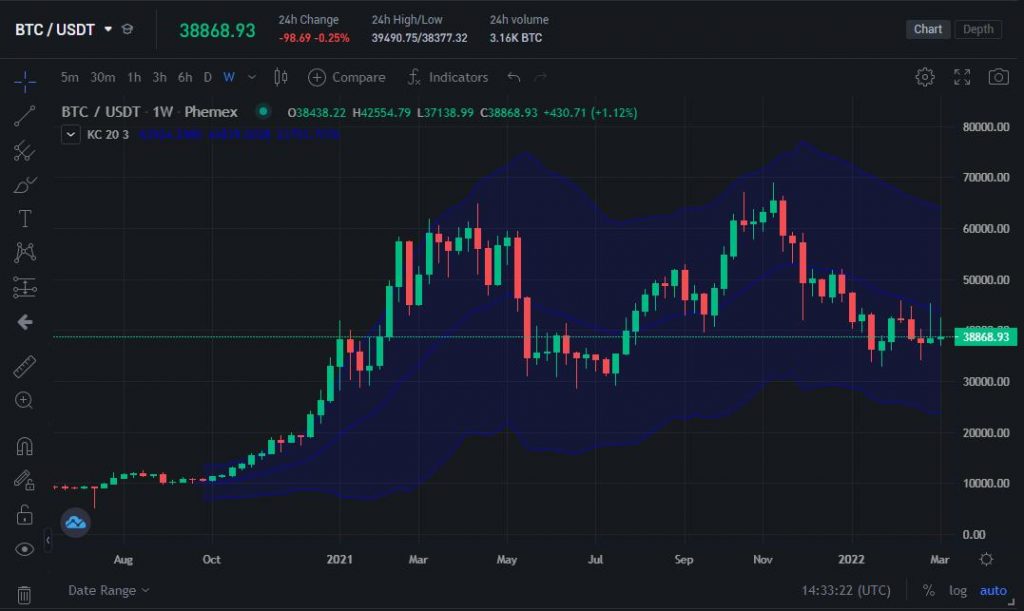 Keltner Bands can be extended by using the multiplier.

This multiplier is useful for seeing how far up or down the Bitcoin price could on the extreme end. Using the default setting, we saw Bitcoin was trading above or below this chart multiple times over the last year. However, once the multiplier was implemented we see the price is contained within the channels.

There are multiple Kentler Channel strategies as this indicator is suitable for both long-term trading and short-term swing trading and scalping.

The breakout strategy is used in the stock markets – traders go long on a stock when the markets open in the morning and stocks are bullish. This cannot be replicated in the crypto markets because the trading goes on 24/7. However, we can use their exit strategy to make profitable trades on Bitcoin.

This is how Bitcoin looks on the daily chart: The daily Bitcoin price moving above and below Keltner bands.

The price is currently below the middle band and we could open a long trade, and then close it when it reaches the middle. While there is a chance that the price could break down, it is more likely to hit the middle band.

When Bitcoin trades above the middle band, we could open a short and wait for it to reach the middle band again. Bitcoin often rose above the band and then touched it again within a few days.

The Keltner Channel scalping strategy is a short-term trading strategy that utilizes 1m (minute) charts. This strategy requires proficiency and we recommend it for experienced traders only.

Press on “1m” at the top left to open the minute chart: 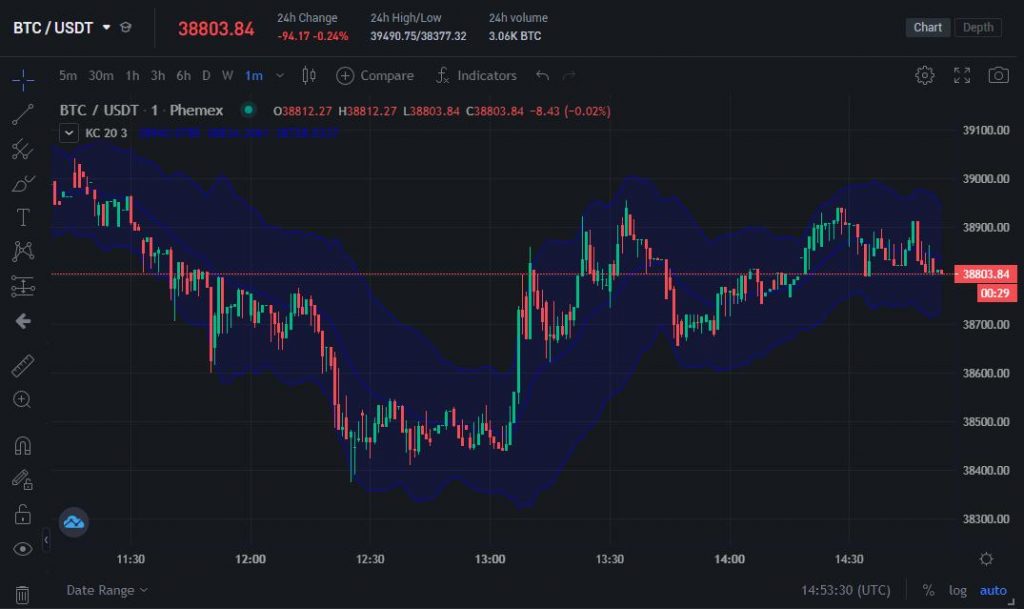 The 1-minute chart is used for scalping Bitcoin.

Scalping is about buying Bitcoin at a low price and selling at a higher price. It requires great attentiveness as traders often rely on leverage to be profitable using this strategy. To scalp Bitcoin using Keltner Channels, wait for the price to reach the lower band and open the trade. Close the trade when the price reaches the middle or the upper band.

Warning: Make sure to use stop-losses for scalping if you’re trading futures. A stop-loss could prevent you from losing your money by exiting from a trade-gone-wrong early.

Keltner Channels are the most similar to Bollinger Bands. Bollinger Bands are one of the top 10 most used indicators across all markets and they contain assets using bands similar to the channels we covered. They can help us identify bullish and bearish trends. On Phemex, you can load Bollinger Bands with Keltner bands simultaneously: The only visual difference is that Bollinger Bands use a red line in the middle of the two bands. The calculation differs in that which Keltner bands use ATR while Bollinger Bands use standard deviation to determine the range of the upper and lower levels.

The Keltner Channels are in general more sensitive to the price action, and Bollinger Bands perform better in eliminating market noise. A trader could use the “Hide” setting at the top-left to check one without the other and compare the upper and lower limits on both before placing a trade.

The indicator is an excellent trend-confirmation tool and an alternative to the Bollinger Bands indicator. If traders are in doubt as to how high or how low the Bitcoin price could go, they can implement both indicators side-by-side and compare the levels based on the average price.