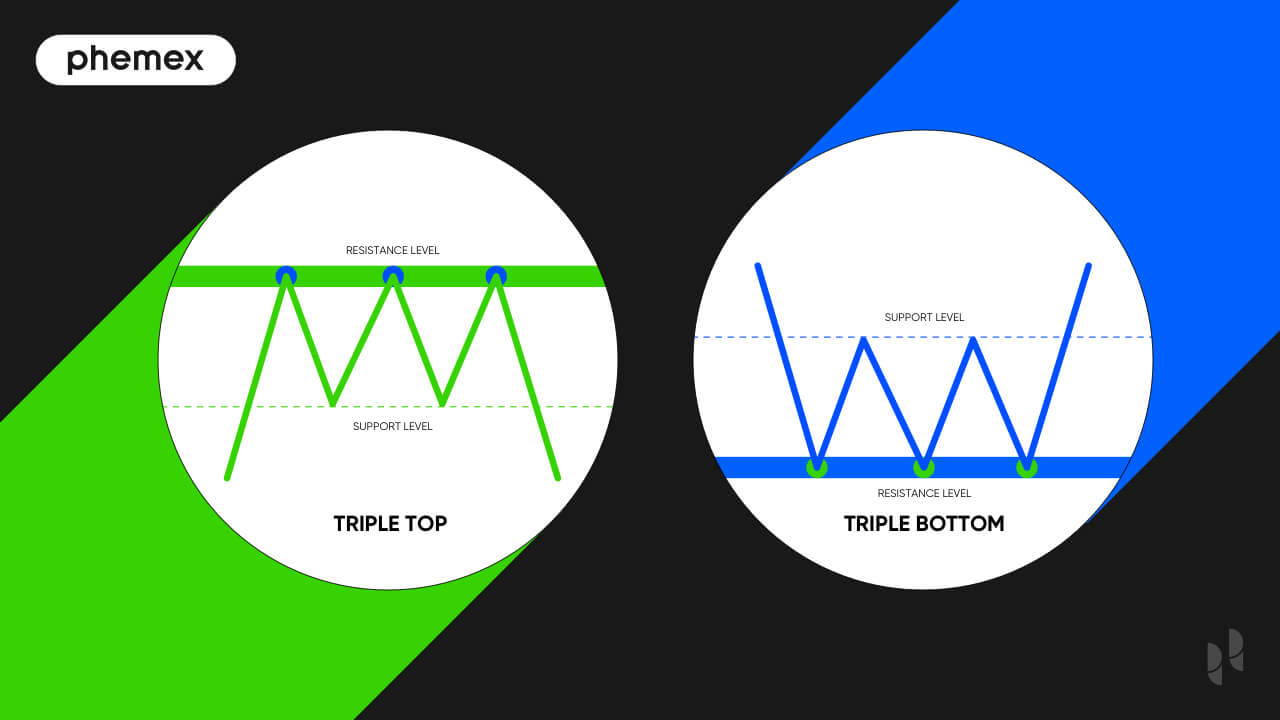 What is a triple top pattern?

A triple top trading pattern is identified by three upward peaks that are about equal heights on the price chart. It can be an indicator of an imminent trend reversal to the downside i.e. bearish trend, because the price has made multiple attempts but is unable to penetrate the peak, as there are just not enough buyers at that price range.

Triple tops can occur on all trading time frames. However, in order for the pattern to be considered a triple top, it must occur after a clear uptrend.

Drawing a horizontal line across all peaks will give you the resistance level of an asset–this is the price that needs to be crossed before the asset can rally further. Otherwise, it is likely that prices will trend downward.

Why does this happen? If price cannot go higher, there is a limit to potential profits, and as it falls into the trough area, some traders will exit long positions (buying with the intention to sell at a higher price) and other traders will make short positions (selling with the intention of buying back at a lower price). These two actions combined will drive the downward trend.

What is a triple bottom pattern?

A triple bottom pattern is the reverse of a triple top pattern–identified with three downward price troughs of about equal heights, with two upward peaks on the price chart. This can be an indicator of an imminent upward move i.e. bullish trend, because price has made multiple attempts but is unable to fall further (indicated by the troughs) to a lower price; it is held up by the support levels. Again, in order for the pattern to be really considered a triple bottom, it must occur after a clear downtrend. 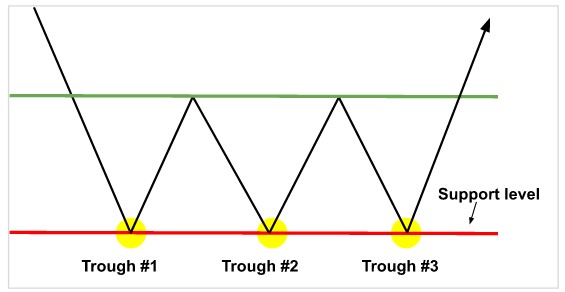 When the pattern of a price forms a triple bottom by rebounding from its support levels three times consecutively, it signifies that there are more bulls than bears at that price support level–not enough sellers are willing to sell at that price, because they believe price will rise higher. This bullish sentiment will thus drive prices up.

How to trade triple top or triple bottom patterns?

As a general rule when trading a triple top pattern, only enter a short position–i.e. sell with the intention of buying back–when price breaks through the support level. This signifies the completion of the triple top pattern and a further price decline is likely. For confirmation, watch for strong volume as the price falls through the support level. If there isn’t a strong volume, price may not fall as expected.

Similarly, with a triple bottom, only enter a long position when price rises above the resistance line (see below image), and watch for significant volume to confirm the trend reversal, otherwise price may not rise as expected. 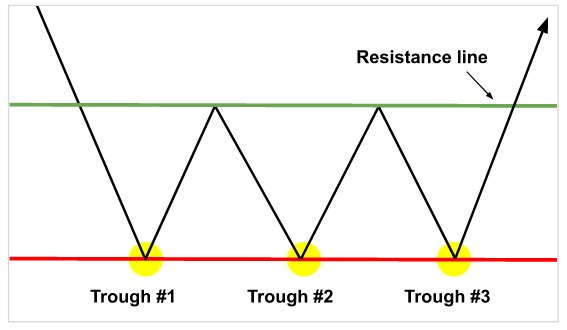 Triple tops and triple bottoms are useful indicators, as they allow investors the opportunity to predict when a trend reversal is about to occur. They usually represent a tug of war going on between buyers and sellers, and can be highly profitable when correctly identified, especially early on during the pattern’s development.

However, herein lies the main problem with both triple tops and bottoms–they can be difficult to identify early on, and can easily change into a different pattern unless complete. Because of this, triple top and triple bottom trading patterns are much easier to identify retrospectively, when the opportunity to trade has passed.

Having said that, the golden rule in using technical indicators apply–they are not fail-proof, and should not be used in isolation. For example, sometimes an asset will form a triple top, leading traders to sell, believing price will fall, but then the asset will recover and surge, resulting in loss of potential gains for the trader.

Despite this, triple tops and bottoms are a valued indicator for those wishing to conduct market analysis after a busy period of trade, and can provide useful insight when pinpointed correctly.