What is The Elder Force Index?

The Elder Force Index is an indicator that measures the buying and selling force of the Bitcoin (BTC) market. The index calculates the market activity using metrics such as the exponential moving average (EMA), volume, and length of a trend. The EFI indicator can be used on long-term charts such as the 1W (weekly) or short-term such as the 1H (hourly) or 1M (minute).

The Elder Force Index was named after best-selling author – Alexander Elder who invented introduced it in his book “The New Trading for a Living.” The EFI indicator is available for all Phemex markets. Scroll below to learn how to use it.

Who Invented The Elder Force Index?

The Elder Force Index was invented by Alexander Elder, a New York-based entrepreneur and writer. He authored the best-seller “The New Trading for a Living” where he introduced the Elder Force Index in 1993. The book is now one of most well-known trading books on Wall Street.

Andrew Elder wrote 5 other books and he developed the Force Index for all markets. The most popular strategy was to combine it with moving average indicators to measure divergences. The indicator was first used in the stock markets and then adopted in the crypto markets. Bitcoin’s buying and selling force can be identified similar to blue chip stocks.

What Is The Elder Force Index Formula?

According to Elder, the mathematical equation that would predict market force would have to account for three elements: Volume, direction, and time. The Elder Force Index is a combination of these measurements and the results it outputs can only be positive or negative. The following is the Elders Force Index formula:

The official formula uses a 13-period EMA to multiply the force index for the current price action. The best chart to use the indicator on is the daily chart, since it was developed to take averages from the closing times. In crypto trading, there is no closing time and we take averages from the price of Bitcoin at midnight 00:00 UTC to derive data for the indicator.

The force is negative if the price of Bitcoin is lower than the closing time of the previous period, and can go into extreme negatives if Bitcoin is constantly on the decline. The opposite applies when Bitcoin is on an upward run without major corrections.

How to Use the Elder Force Index?

Let’s use Phemex platform for this demonstration. The Elder Force Index is available on all Phemex spot trading and futures pairs. To get started, choose a trading pair and open the chart. For this demonstration, we will use the most traded BTC/USDT pair: The Bitcoin chart is the most traded chart on Phemex.

Press on “Indicators” (highlighted above) and input “Elder’s Force Index” in the search field: Search for Elder’s Force Index among hundreds of different indicators.

Left-click on the Elder’s Force Index and the indicator will load underneath the Bitcoin candles: 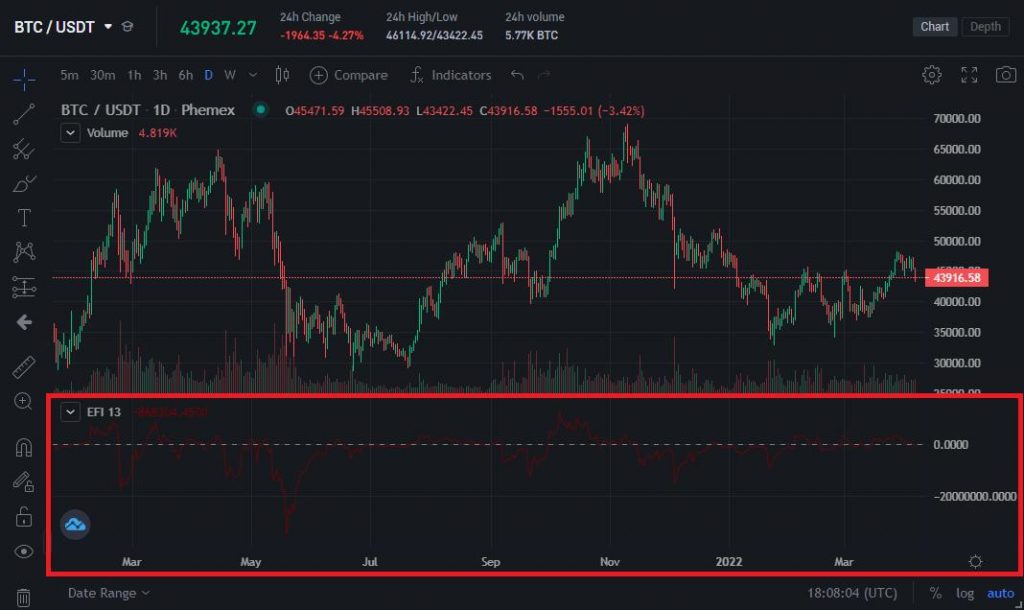 All active indicators are loaded underneath the Bitcoin price chart.

The indicator is now activated. We are now trading on the D (daily) chart and the indicator is oscillating near zero which indicates sideways movement. The indicator can only have positive or negative readouts. A positive readout is when the red line trends above zero, and a negative is when it trends below zero.

If we analyze historic readouts on the indicator, we can see that high trending areas above the mean value indicated price trends. For example, during the May 2021 Bitcoin crash the indicator was trending down in a clear direction. It also trended up when Bitcoin reached a $69,000 all-time high in November 2021: 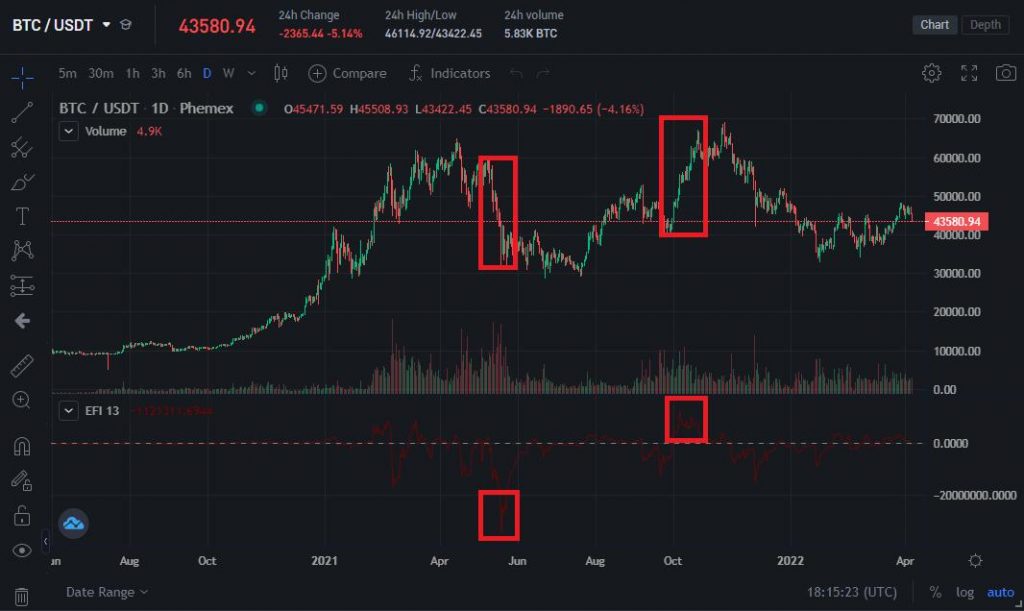 During the strongest trending markets over the last two years, the Elder Force Index was deviating from the mean average by a significant margin. It served as an excellent trend-confirmation tool. For example, if a trader noticed the price was above the mean, they could long Bitcoin and vice versa.

The price of Bitcoin is currently down -5.14% and the curve has gone down slightly. Most times the indicator is trading near the zero value which indicates a sideways market. The sideways direction makes it difficult to predict if Bitcoin is going to go up or down.

If we’re in a sideways market and can’t predict a future direction, we can focus on short-term charts such as the 1H (hourly) chart. If we switch to the hourly chart, the indicator automatically applies the formula for that chart: 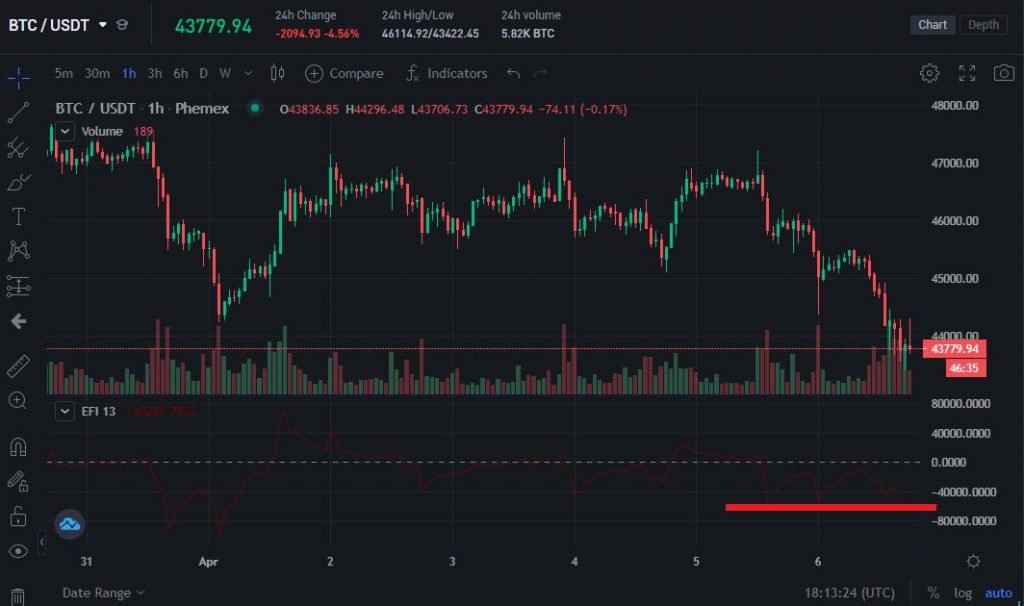 The Elder Force Index can be used on short-term charts.

The hourly chart indicates that Bitcoin has fallen to a support area where it bounced the last few times. This presents a longing opportunity, but only for a short-term trade. We also notice that it broke down when it reached the mean value on the 1H chart, presenting a short opportunity.

The force index is a highly volatile indicator. If we want to smoothen it, we can head to settings and extend the default 13-period EMA. Hover over the “EFI 13” icon at the bottom-left and press “Settings”: Adjust the settings of Elder Force Index to your personal trading style.

Change the EMA from 13 to 50 or 100, to give it a longer timeframe that calculates the historic value and trends in reference to the current price. This can give you a better overview of the current price action.

How To Trade With The Elder Force Indicator?

The best Elders Force Index trading strategy is to use it as a supplementary indicator for trend-confirmation. For example, if you’re trading using the MACD or RSI indicator, you can use the Elder Force to confirm if the trade will go in your favor. Elder Force Index and RSI are now active underneath the Bitcoin chart.

The RSI indicator is a lot more volatile and currently shows that Bitcoin broke down near historic low levels in the mid-short term. To confirm the downtrend with the Elder Force Index, we have to wait for additional readouts because it’s currently indicating the price has not reached historic lows and could bounce to the upside.

The markets are driven by buying and selling psychology. There is a force behind the decisions traders make and this is reflected in the price action. If more traders are bullish on Bitcoin, they start buying it and this creates a buying force that makes the price of Bitcoin appreciate. If they are feeling negative about Bitcoin, it creates a selling force and makes Bitcoin depreciate.

All of Bitcoin’s historic all-time highs and crashes were driven by trending market forces. If the Elder Force Indicator is deviating from the mean value, this indicates a strong trending market. Trending markets are the best time to place a trade because the chance to make a profit is the highest.

The indicator has the advantage of combining multiple metrics such as the historic closes and the volume, which give it a smoother and more accurate readout compared to other volatile indicators. This minimizes noise in the price action and helps traders make the right call.