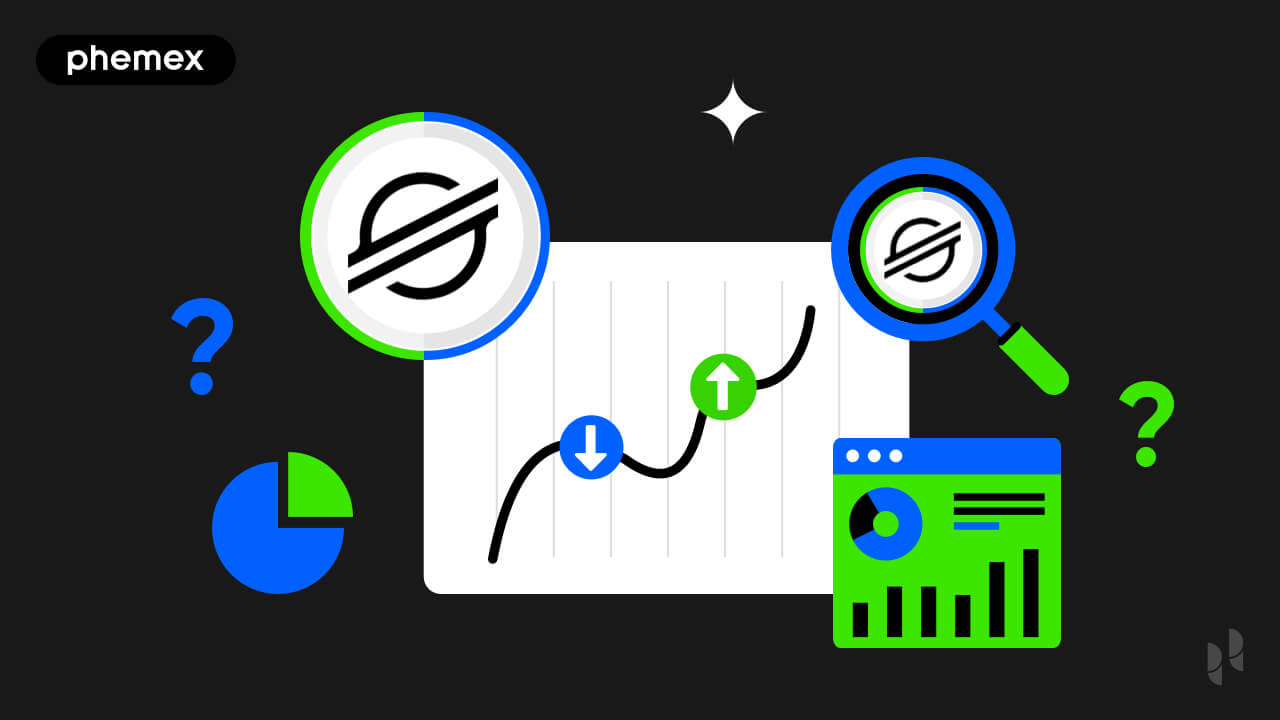 The year 2022 saw not only the crypto but traditional finance markets on a steady downtrend, against the backdrop of interest rate hikes and geopolitical uncertainty.

With the leading crypto Bitcoin (BTC) down by almost 75% from its all time high of $68,789, it is no surprise that all other altcoins are languishing at similar lows. 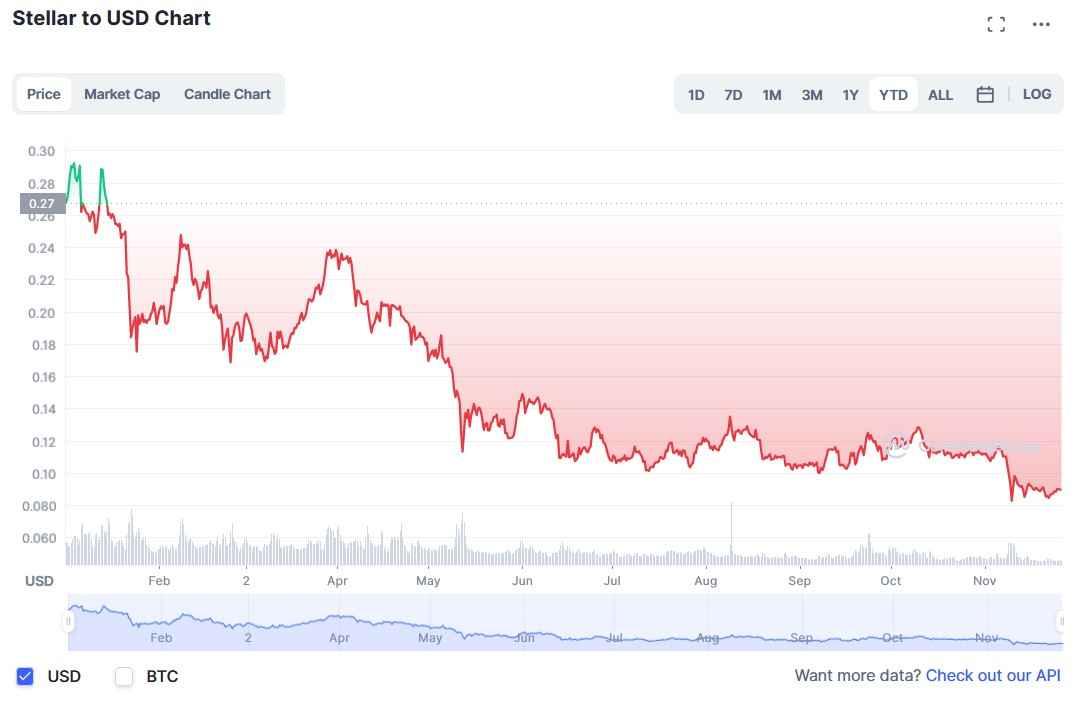 XLM’s price history since the beginning of 2022 (Source: Coinmarketcap.com)

What Is Stellar Lumens? A Quick Recap

Stellar Lumens (XLM) is a decentralized payment protocol and digital coin created to enable fast, low-cost international payments. It was launched in July 2014 by Jed McCaleb, the co-founder of Ripple, and software engineer Joyce Kim. Stellar Lumens is built on the Stellar Consensus Protocol (SCP), which allows for fast global payments with minimal transaction fees.

Stellar Lumens aims to create a globally accessible and low-cost financial system where anyone can access traditional services such as sending money across borders, exchanging currencies, or making payments. It allows users to quickly and easily send funds internationally through its distributed ledger technology while maintaining a very low transaction cost.

Let’s now look at the XLM token’s future and whether it’s worth the investment.

Is Stellar Lumens A Good Investment?

The answer to this question is not a simple one, as it depends on timing i.e. when you invested in Stellar Lumens.

If you were an early investor since XLM launched in 2014, then it could be seen as a good investment as you would have reaped an approximate ROI of 2899.45% as of end Nov 2022 (according to data from Coinmarketcap.)

However, if you bought into Stellar Lumens at a high point of the market, then you may have not seen the returns you had hoped for. 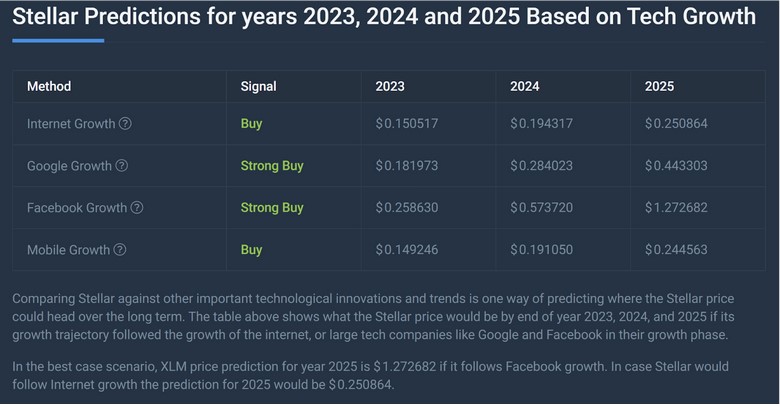 It’s a given that XLM’s price projections are all over the place. As far as crypto forecasting goes, it’s as far as can be from an exact science. Nevertheless, price projections can at least give an idea about where crypto might be headed according to technical indicators.

More specifically, according to the platform’s 2025 Stellar coin price predictions, the minimum for which this token will trade will hover around $0.14. The most optimistic Stellar price predictions are for XLM to go to as high as $0.21, with an average value of about $0.16.

Another big name in the crypto prediction space, CoinCodex, however, provides an even more optimistic prognosis. CoinCodex’s 2025 XLM crypto price prediction is for a minimum of $0.25 and a maximum of $1.27.

In general, XLM’s 2025 projections by the most popular crypto forecast services fluctuate between a minimum of $0.14 (CryptoPredictions) and a maximum of $1.27 (CoinCodex). For long-term investors, of interest will be XLM’s projections for at least the next decade.

Most crypto prediction platforms do not offer such long-term estimates except for the two biggest cryptos, Bitcoin and Ethereum (ETH).

However, keep one thing in mind with such long-term projections–altcoin prices are closely related to investors’ general sentiment towards the crypto market and the project team’s growth and development–if the project does not grow according to investors’ expectations, there is a high probability that all price predictions will fall flat.

Will Stellar Lumens Go Up?

Ultimately, it is tricky to predict the future of any cryptocurrency, as prices are highly volatile and can fluctuate drastically due to market forces. That said, Stellar Lumens has seen a steady increase in its price since its launch in 2014 and has become one of the top performing cryptocurrencies in recent years.

Firstly, Stellar Lumens has a clear use case, targeting a valid pain point. It makes international remittances fast and cheap–someone can buy XLM tokens with USD, send it via its blockchain to the recipient, who then converts it back to their local currency, without all the hefty bank charges, almost instantly.

It is expected that more adoption of Stellar Lumens across industries and regions will lead to a further increase in the price of the coin. The growing demand for decentralized finance applications powered by Stellar Lumens’ blockchain technology is also likely to drive investor interest and appreciation for the coin’s value.

Additionally, new developments from the Stellar Development Foundation such as Interledger Protocol (ILP) could help boost adoption and further increase the price of Stellar Lumens.

Ultimately, the future of Stellar Lumens is based on how successful its underlying blockchain technology and network become, so it is impossible to predict with certainty if its price will go up or down in the long-term.

The key is for investors to do their own research, assess their risk tolerance level, and invest accordingly. By taking a long-term approach and diversifying their investments, investors can maximize their chances of success.