Dark Cloud Cover Pattern – What Does it Mean? 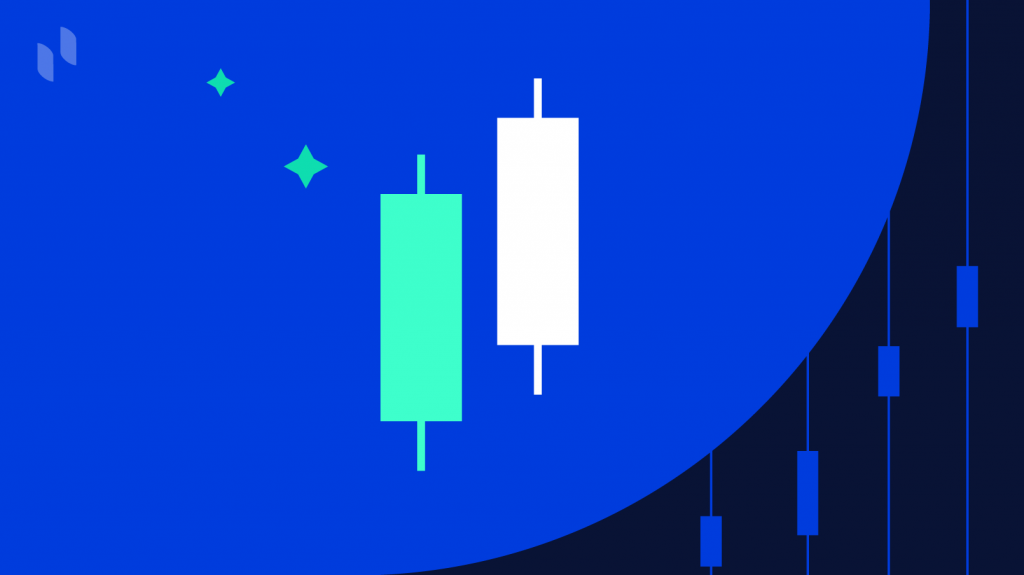 Public opinion on trading cryptocurrencies periodically shifts from being a subtle art form to sheer luck. The latter idea is often enforced by novice traders who’ve just lost a lot of money, but while trading may sound like a bunch of mumbo jumbo, metrics, and patterns, there is a method to all the madness. As intangible as they seem, trends are very real, and identifying them is immensely profitable.

Trends evolve with the times, and market sentiment in the world of cryptocurrencies is about as fickle as the weather. Some traders attempt to identify these trends and shave a tidy profit from the momentum generated during these movements.

What is The Dark Cloud Cover Candlestick?

One sign of a trend reversal is called a dark cloud, a bearish candlestick chart pattern where a downward moving candle opens above the close of the prior upward-moving candle and closes below its midpoint. The reversal is confirmed when the next candle continues to move lower.

How does a Dark Cloud Cover Pattern look like?

The name stems from how the red candle forms a cloud over the previous green candle, pushing buyers to bid higher at the open while sellers take over later. Most traders only follow the dark cloud when it appears after an uptrend, and its signals are far less significant in choppy or ranging markets.

Trading trends doesn’t sound all that complicated in theory, but knowing where to enter and exit a trade without losing capital can be tricky. Traders use a wide range of tools and indicators to track market movements across different time frames and make investment decisions based on the broader picture they observe.

Technical analysis is practiced by all kinds of traders trying to profit from observing patterns in historical data. This generally includes tracking information about trade volume and momentum to draw insights on potential future movements.

No single tool or technical indicator can offer this level of insight, especially in the blockchain industry, where all the information is public but not necessarily common knowledge. Trend reversals are quite common, and knowing how to accurately predict them using a combination of indicators, patterns, and intuition can be the difference between completely losing your investment and reeling in even bigger profits.

When Does the Dark Cloud Cover Candlestick Pattern Occur?

The dark cloud primarily consists of two basic parts: the green candle at the peak of an uptrend and the red candle that erases over half of the previous candle’s gains. The charts depict a sunny sky that dims when the dark clouds move in. The drop down to the last candle’s close in itself would signal bearish momentum, but it is the retracement back into the gains made earlier, strengthening the selling power to pull a reversal.

The difference between the first candle’s close and the second’s open is called the market gap, and a higher market gap generally signifies greater chances of a reversal. The pattern is also observed to be more reliable when it occurs near significant resistance levels, especially if the gap appears above the trend line but eventually closes below it. During dark cloud cover patterns, the peak price can also be considered a potential stop-loss point, as well as a resistance line for future reference.

Does the Dark Cloud Cover apply to all candlestick charts?

It’s important to remember that the dark cloud cover pattern is only applicable to candles with large bodies. Smaller candles with larger wicks often aren’t strong enough to drive a momentum shift. Larger-bodied candles suggest a more decisive move down, which can be a significant factor in predicting price trends.

As mentioned earlier, traders often wait for an additional confirmation candle before exiting, but the bearish candle’s close can also be used as a potential exit position. Short sellers sometimes use the red candle’s opening to mark stop losses, and since there are no profit targets for the dark cloud cover pattern, traders often employ other methods and patterns to determine their exit points more accurately.

Further, candlestick patterns are merely visual, meaning there is no real calculation involved. This means traders planning an exit need to rely on other technical trading tools, like the relative strength index (RSI) momentum indicator. Overbought markets can indicate markets that are about the crash, and a break under crucial support levels in these scenarios can be strong signals of an incoming bearish reversal.

How to Trade The Dark Cloud Cover Pattern

Like all candlestick patterns, the dark cloud depends on indicators, resistance levels, and price action. No asset should be traded based on patterns alone, but where the pattern occurs in the trend is just as crucial to identifying it. Since dark clouds are generally used as bearish reversal signals, they are usually seen at an uptrend’s peak.

While some traders use the open of the engulfing candle to mark exit points, since this candle can be much bigger than the previous one, it can leave traders with much higher stop-loss points than necessary. The candlesticks’ opens and closes seen during a bearish engulfing pattern are not reliable price targets, and it’s essential to use other indicators to confirm the trend reversal.

The bearish engulfing pattern does not discriminate when it comes to the first candle’s length, but the dark cloud cover does. Though they both mark intraday reversals, a dark cloud just isn’t as strong of a signal without a long-bodied green candle.

Like the market gap mentioned earlier, the piercing pattern also presents a gap between the first and second candles, which gauges how strong the reversal signal is. During the period of the first candle, sellers influence price action, depleting the supply. During the second candle, the buying demand rises due to the earlier selling, piercing back in the green.

Many different signals mark reversals, and knowing which ones to follow and which ones will mislead you is vital to trading successfully. And while the dark cloud and other candlestick chart patterns may not be 100% reliable, they allow traders to detect potential reversals and mark out exit points in mere seconds.

The dark cloud is generally indicative of a chink in the uptrend’s armor. Some traders believe the pattern is significant due to its reversal signaling properties, while others assert that the bearish engulfing pattern is a far more dependable warning.

It’s imperative to never confuse the dark cloud for the bearish engulfing pattern. While they both appear to be similar, they translate into entirely disparate market conditions.

The daily charts are where the dark cloud shines brightest, and the pattern’s validity is known to be less substantial in lower time frames. The pattern is also applicable while trading asset derivatives contracts like options and for swing trading.

In cases where the dark cloud pattern is observed without a reversal occurring, it can indicate small-scale market-wide profit booking during more extensive uptrends. A candle that closes under the open of the previous trend is more often attributed to an engulfing pattern rather than a dark cloud, and characteristics like candle length and volume can play a critical role in determining these patterns.

The dark cloud is a fantastic chart pattern that can be extremely helpful in detecting trend reversals at the end of a bullish price movement. While they aren’t always accurate, traders can quickly ascertain the validity of the dark cloud’s signals by ensuring specific prerequisites are met. These include the candles’ sizes, trade volume, the market gap, key price levels, and inputs from other momentum indicators like RSI.

Having a solid fundamental understanding of candlestick placement can help trigger faster trading responses to market sentiment changes. This can help make positive trading decisions, but it’s crucial to only use chart patterns like the dark cloud in conjunction with other forms of technical analysis and with the context of broader market events.