What is Dragonfly Doji: An Indication of a Trend Reversal Trading can be one of the most draining jobs out there, especially when there are millions of dollars on the line. The cryptocurrency industry is quite famously volatile with no room for hiccups. Where some see the potential for unprecedented gains, others see unbearable risk. The word ‘Doji’ originates from the Japanese word for ‘blunder’ or mistake. As you can imagine, a candlestick chart pattern with the word ‘mistake’ in it can be pretty misleading, but spotting mistakes where others don’t can be quite profitable.

What is a Doji Candlestick?

A ‘Doji’ refers to a common candlestick chart pattern for financially traded assets whose closing and opening prices are virtually the same. Doji candlesticks can appear as a cross, an inverted cross, or even a plus sign. These are used in the technical analysis of asset prices.

A Doji generally signals a reversal pattern and forms when an asset’s open and close prices are virtually equal for a given period. However, it can also signify a continuation when both buyers and sellers are gaining momentum. They are most commonly seen during periods of consolidation and help analysts identify potential price breakout points.

What is a Dragonfly Doji?

The Dragonfly Doji is the rejection of a price trajectory. When an asset’s value is on a downtrend, this pattern is the last strike. The appearance of the Dragonfly Doji symbolizes the bullish sentiment preventing the price from breaching below. Its wick marks the battle being waged between the bulls and the bears and is an expression of buyers standing their ground.

This pattern functions best when used alongside other technical indicators, especially since the Dragonfly Doji can also be a sign of market uncertainty rather than an outright reversal. Further, this pattern also presents itself with other more prominent chart patterns, such as at the end of a head-and-shoulders formation.

A Dragonfly Doji accompanied by high trade volume is generally a more reliable signal than one that comes with a relatively lower volume. Ideally, the confirmation candle has both strong price movement and volume. Compared to other candlestick patterns, the Dragonfly Doji is actually quite rare, and while it can often signal a trend reversal, not all reversals are accompanied by this pattern.

This makes it less than ideal for most traders, but understanding the sentiment behind these market occurrences can be incredibly beneficial to anyone trading financial assets. Profit margins are subjective to each trader and depend a lot on risk exposure, but anyone can profit from the Dragonfly Doji in the right conditions.

The Dragonfly Doji vs. The Bullish Hammer

The Dragonfly Doji can signal a reversal towards either the upside or downside based on the incoming trend. It is similar to a Bullish Hammer Pattern, except for the near-identical opening and closing prices. It also has a unique ‘T’ or a ‘cross shape, indicating that the trading day opens on a downward trend and later reverses to close back to the opening price.

The low period in the case of a Dragonfly Doji is significantly lower, giving its distinctive ‘T’ shape. When the pattern appears after bullish movement, it generally indicates that a potential price decline is on the way. The candle that follows confirms the trend and traders typically wait for this candle to appear before acting on the pattern’s appearance.

A Dragonfly Doji during an Uptrend

During an uptrend, a Dragonfly Doji is considered a weak signal. This is because it shows how buyers cannot create a new session high, indicating market uncertainty about the price’s direction. When the pattern appears after an uptrend, the confirmation candle will close below the Dragonfly Doji.

A Dragonfly Doji during a Downtrend

When the market moves down, a Dragonfly Doji is considered much more substantial due to the swift change in power from the sellers to buyers. In this case, the confirmation candle closes above the Dragonfly Doji.

If the market opens higher, a Dragonfly Doji represents bears rejecting the climb and pushing the price back down. These formations can signal periods of consolidation in the near future, but the trend may continue along its original trajectory after this period of rest. This can also suggest that the trend is losing strength, and while it’s difficult to mark the Dragonfly Doji as a powerful signal, it’s not something to be ignored.

Limitations of the Dragonfly DOji

While the Dragonfly Doji is undoubtedly popular among traders, it isn’t always reliable. It’s crucial never to trade an open candlestick and always ensure that the confirmation candlestick has occurred, but even after confirming the pattern, there’s no guarantee of a trend reversal. Time is also an essential factor to consider when trading the Dragonfly Doji. Higher time frames can strengthen the validity of the pattern, while lower time frames weaken its signals.

How to Identify a Dragonfly Doji in The Crypto Markets

While the Dragonfly Doji isn’t the most common candlestick chart pattern, it does occur here and there, even in cryptocurrency markets. The following graph shows a temporary bearish price reversal on Bitcoin’s daily time frame. As the chart shows, prices continued going down after the bearish Dragonfly Doji’s appearance, which appeared during a period of consolidation following a predominantly bullish move. 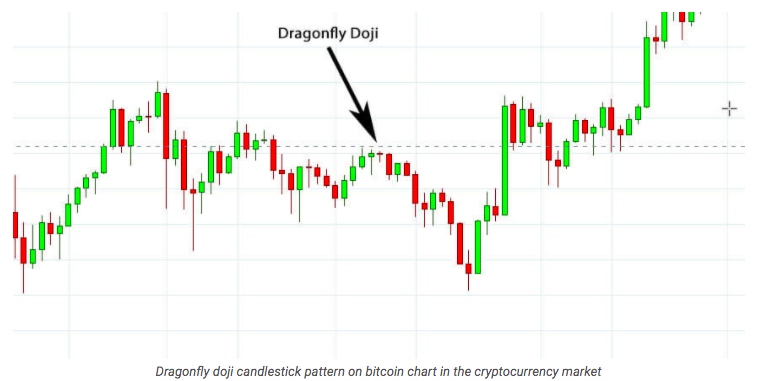 The following chart shows a bullish Dragonfly Doji that appeared just after a bearish signal on the daily time frame. The Doji signifies how buyers prevented the prices from going lower, acting as a support level to allow for the continued rise in Bitcoin’s value.

Traders are always looking for better ways to make profits, and the uncertainty behind the Dragonfly Doji’s predictions makes it a risk that isn’t always worth taking. Traditional long-legged Dojis usually represent indecision or a standoff between the bulls and bears, but these patterns can act as excellent points for exiting or closing profitable positions.

How to Trade The Dragonfly Doji?

As mentioned above, a strong Dragonfly Doji pattern often indicates an incoming bullish price change. However, traders must draw their conclusions without depending solely on this indicator due to its unreliability in certain conditions. For one, Dragonfly Dojis patterns infrequently occur since the chances of having the open, high, and close prices be the same are very low.

There tend to be slight discrepancies between the three values, and since the Dragonfly Doji doesn’t occur during every reversal, it isn’t too reliable for spotting them. Even when it does happen, there’s no guarantee of the price continuing to rise or fall as expected, even after the confirmation candle’s appearance.

The pattern can also occur mid-trend, but inspecting price action on higher and lower time-frames can reveal information that can help traders decide whether to bet on a reversal. Other signs of a genuine Dragonfly Doji include the wick being unable to breach a support or resistance level or even the edges of an indicator like the Bollinger Bands.

In these situations, traders generally create another stop-loss position since a large gap could nullify potential gains in case of a sudden market crash. Estimating the pattern’s potential trade reward is difficult since candlestick patterns do not typically provide price targets, making it best to use other analysis methods and tools to exit the trade when it appears profitable.

What is the Difference: The Dragonfly Doji vs. The Hanging Man

Like the Hammer, the Hanging Man also has a short body and a long wick. This pattern usually forms during bull markets and is considered a sign of a bearish reversal. During a Hanging Man formation, the asset trades much lower than its opening price but rallies back near the open before the session closes. Its body represents the difference between the opening and closing prices, and its lower wick is twice as long as its body, if not more.

What is the Difference: The Dragonfly Doji vs. The Gravestone Doji

Distinguishing between the Hanging Man and the Dragonfly Doji isn’t too tricky. If the candle’s body is visible, the chances of the pattern representing a Dragonfly Doji are quite slim. The Gravestone Doji is also near-identical to the Dragonfly, except it occurs more prominently in bullish markets, predicting a bearish reversal.

These patterns are rare, and so traders don’t catch them every time. However, even when they occur, it’s vital to confirm the trend before performing a trade.  Momentum indicators like the Relative Strength Index (RSI) and the Stochastic Oscillator can help improve the pattern’s accuracy. If the asset appears to be close to oversold levels at a local bottom, the Dragonfly Doji is a strong bullish reversal signal.

If the price moves into the oversold zone, the Dragonfly Doji’s signals are much more substantial, giving it a lot more headroom for growth. Technical analysts and investors are continually finding new ways to take advantage of market conditions, and a robust understanding of how the market functions can go a long way.

As with any investment, make sure to do your own research before buying any asset. Invest only what you can afford to lose because the possibility of loss is all too real, especially in erratic markets like crypto. Dojis, in general, may not be very reliable indicators, but they do give traders a moment to reflect on the market’s position.

The Dragonfly Doji is an emblem that represents the market grappling with an asset’s value, but the market does eventually decide on a direction. It may not be capable of telling you where the price will go, but it does signal traders to investigate sentiment. Combined with the right analytical tools, the Dragonfly Doji is a fascinating product of how markets function and can be astonishingly profitable for those who know how to use it.