A Gravestone Doji is a variation of the Doji candle pattern, most typically thought to indicate that a bearish reversal is about to occur. However, this is not a universal truth, and traders should understand what information they can glean from a Gravestone Doji and how it can be applied in their trading practices.

In this guide, we’ll cover what the Gravestone Doji is, how you can identify it, and what kind of market information you can find out from it.

What is a Gravestone Doji?

The Doji candles are a particular form of candlestick pattern shown on a trading chart that indicates the market is somewhat undecided.

A Doji candle is a pattern that doesn’t have any discernible body, only a thin line that crosses the wick. This indicates that although there was trading throughout the session, it opened and closed with roughly the same price.

However, the horizontal line position on a Doji candle can indicate the traders’ sentiments during that session. A relatively central horizontal line indicates indecision, with traders unwilling to take a bullish or bearish position either way.

The Gravestone Doji occurs when the horizontal line is at the bottom of the wick. This shows that prices opened and closed at the very bottom of the session’s highs and lows. 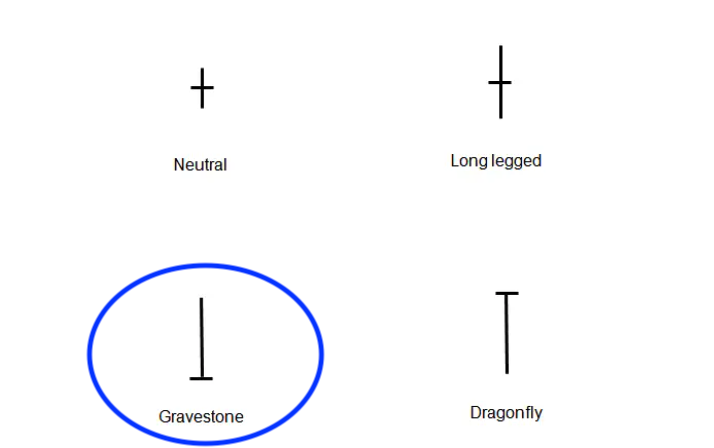 What Does a Gravestone Doji Indicate?

Typically, Doji candles indicate the kind of market indecision that comes at the end of a particular trend, and the Gravestone Doji is no different. The long wick above the session opening and closing price indicates bearish trading sentiments for the trading session covered by the candlestick.

In particular, when it emerges after a bull run, most traders will take the Gravestone Doji as an indicator that a bearish reversal is about to take place, as in the chart below. This shows a Gravestone Doji occurring immediately before three bearish sessions, followed by a short pullback and a steeper drop. 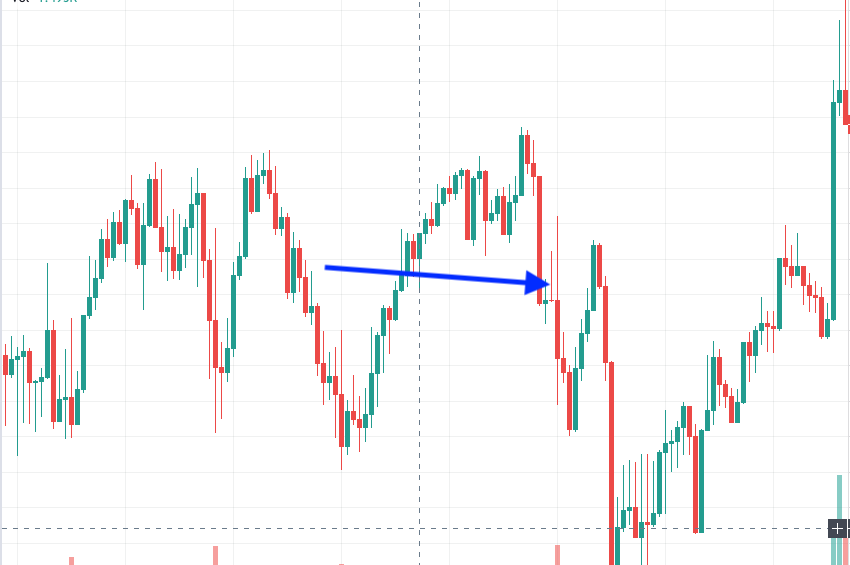 However, the Gravestone Doji doesn’t offer any certainty that a bearish trend is about to occur. Observe the chart below, which shows several bull sessions immediately after a Gravestone Doji, followed by a bear run. 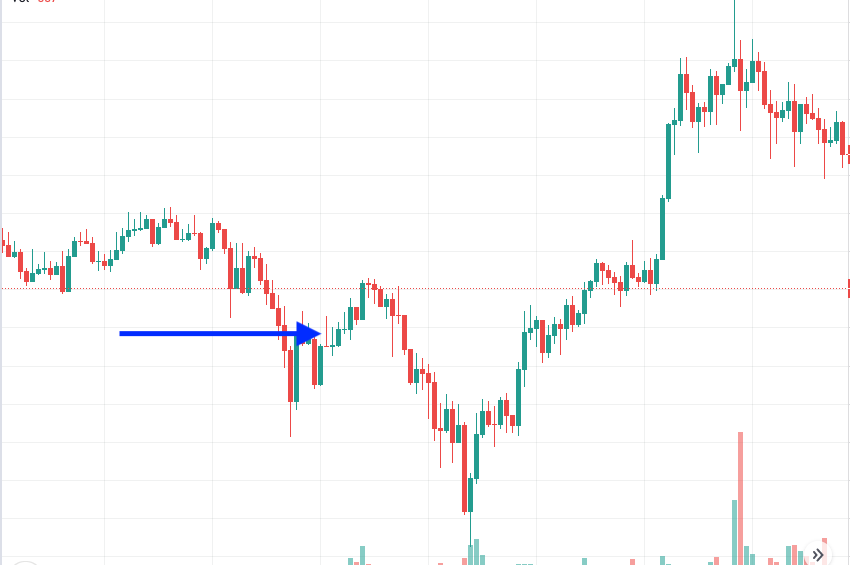 In this case, the Gravestone Doji also came after an evident bearish trend. Still, by itself, it didn’t provide any strong enough indication as to what a trader could expect to happen next.

For this reason, the Gravestone Doji (or any Doji candle, for that matter) should never be taken as a reliable trading signal in isolation. This is particularly true during lower volume trading sessions, where a lone candle can reveal little about overall market sentiment. Instead, if you see a Gravestone Doji, wait for the next candle to confirm your hunch, or use additional technical analysis tools, such as triangle patterns, stochastic oscillator, or Fibonacci retracement levels.

Assuming that they confirm a bearish pattern is about to emerge, traders can use these signals as the basis of closing out long positions and opening shorts.

Difference Between a Gravestone and Dragonfly Doji

The opposite of a Gravestone Doji is a Dragonfly Doji. With the Dragonfly Doji, the opening and closing prices for the trading session are indicated by a thin horizontal line at the top of the candle wick. This pattern generally shows that the bulls had control of the trading session. Although some bearish activity happened, resulting in the long lower wick, bullish sentiments prevailed at the start and end of the period in question.

In contrast to the Gravestone Doji, the Dragonfly Doji can indicate a bullish reversal if it emerges at the end of a bearish trend. However, similarly to the Gravestone Doji, it’s a tenuous indicator when taken by itself. Traders should perform additional analysis or wait for the next candle to confirm the trend. Assuming these confirm a bullish breakout, traders will want to close out shorts and open long positions.

Read How to Trade with the Dragonfly Doji to Learn more

However, the Gravestone Doji is characterized by the presence of the body as a line, indicating an opening and closing price that are near-identical. The small body of the shooting star and inverted hammer indicate a definitive price differential between the session opening and closing, even if the differential is relatively minor compared to the session highs and lows.

Understand Shooting star and other popular candlestick patterns, check out The 8 Most Important Candlestick Patterns in Crypto Trading

Where do Doji Candles Come From?

Candlestick patterns are thought to originate with Japanese rice traders and go as far back as the 17th century. As such, many candlestick patterns have distinct names. In the case of Doji candles, the word “Doji” means a mistake or a blunder in Japanese. It describes the fact that the trading session ends up keeping prices fairly static, which is a “mistake” because the wicks of the candle demonstrate highs and lows where groups of traders tried to push the markets one way or another.

Steve Nison introduced the concept of Japanese candlesticks to the world of trading in his 1991 book, “Japanese Candlestick Charting Techniques.” These concepts are now widely used by traders all over the world.

Gravestone Doji’s are a useful tool to identify a possible trend reversal that may be about to emerge, so it’s worth watching out for them when you’re trading. However, they’re a fairly nebulous indicator, and market forces can easily ensure that the next trading session doesn’t go how a Doji candle may indicate. Therefore, it makes sense to combine them with other technical tools to form more reliable trading signals.