What is Radio Caca (RACA): A Gamer’s Guide to Playing the Famous Metaverse Game There are two core components to the Radio Caca Metaverse: The United States of Mars (USM) planet and the Metamon Game (an NFT battle game).

The Metamon Game is a single-player, Play-to-Earn (P2E) battle game that incorporates NFT characters.The games are fast-paced and unfold over just 30 seconds. There are three levels: Beginner, Intermediate, and Advanced. According to the Radio Caca website, this is a mini game which will be subsequently integrated into USM as a 3D game.

The Radio Caca ecosystem is developed by the Radio Caca DAO (Decentralized Autonomous Organization), and is one of the top 10 largest Metaverse projects by market cap.

It is built on two chains: Ethereum (ETH) and Binance Smart Chain (BNB).

The Radio Caca DAO is also the managerial body of the rare Maye Musk Mystery Box (MPB) NFTs – one of the most valuable NFTs on the BSC ecosystem.

The team behind Radio Caca has been quoted to “give the Metaverse back to the people” by making land purchases in the game cheap.

What is the RACA Coin?

The RACA coin, which is the native coin of the Radio Caca ecosystem, is the BEP-20 token used for DAO governance and virtual gameplay.

The RACA coins and the NFTs can be staked to earn other NFTs.

What Is The Radio Caca (RACA) Metaverse?

The name “Radio Caca” can be confusing as users might assume there is a radio station. In fact, it is a large virtual universe where users from all over the world participate and engage in activities such as exploring the universe, playing games, trading NFTs, and attending concerts.

The Radio Caca project is a promising metaverse project that encompasses multiple virtual realities and video games in its ecosystem. It was founded in May 2021 by Jeff Watney, a Californian-based entrepreneur. Since then, the project has attracted developers from Silicon Valley, Europe, and Asia.

The RACA token can also be traded on the Solana (SOL) chain. However, in the future the Radio Caca project aims to develop its own Layer-1 blockchain that will be interoperable with other blockchains.

RACA Metaverse: What Is The United States Of Mars (USM)?

The United States of Mars (USM) is a unique component of the Radio Caca Metaverse. Imagine a Google Maps-like platform where you can explore a planet by zooming in and out of the universe and locating virtual states. The states reveal themselves as you zoom in on the planet, and once you’re in one, you enter the virtual Metaverse. Your unique blockchain address is your ID in the planet and you can start exploring it using your keyboard or mouse.

Inside the USM verse, a user can explore the land, decorate the buildings, check out space vehicles, attend celebrity concerts or weddings, explore art exhibitions, and purchase/trade NFTs.

On the platform, the native token of the ecosystem, RACA, is converted to U-RACA to trade. Users cannot withdraw the U-RACA coin, but they can withdraw the NFTs and sell them on third-party marketplaces.

To get started, users need to connect to a decentralized wallet such as MetaMask and sign the signature request:

Users will then zoom in or out of the planet to a point of interest using a mouse cursor, and lock-in on a state such as “Kiss-Up State” which is the first state shown: Once they press “Enter” they are inside the Metaverse and are greeted by an instruction manual helping them navigate the state. Navigation is similar to any regular PC video game:

Their blockchain wallet address is used as their ID on the platform (top-left). The default avatar is an astronaut in a space suit: Using the navigation pad, they can climb up the stairs and explore an art exhibition. Once they get close to an art piece, they can press the “F” button to get a preview for the NFT behind it: This NFT, for example, last sold for 3.1 ETH ($9,300 at the time of writing). Users can deposit RACA coins and convert them to U-RACA to purchase NFTs on the platform. There is a built-in NFT marketplace where NFTs can be listed and sold directly:

Once a user buys or sells an NFT, their assets are automatically transferred to their decentralized wallet.

How To Play The Metamon Game?

Metamon Game is Radio Caca’s NFT battle video game based on a Play-to-Earn (P2E) model, where game characters and items are traded like collectibles.The Metamon Game incorporates different battle environments such as “Metamon Island,” “Lost World,” “Space Port,” and “Hall of Valhalla.” There are four tiers of NFTs in the game: Metamons, Eggs, Potions, and Diamonds.

Metamons are the most important NFTs because these are the battle characters used in the game. A Metamon NFT has 20 Energy which means it can battle up to 20 times. The battles are played against NPCs (non-playable characters) which means users play against the system and not against other users.

The Metamon Game is not based on skill level, but rather the quality of the NFTs and the player’s capability to form powerful Metamons. To get started, a user needs to connect their MetaMask wallet to either the Ethereum or the BSC network: The user’s ID in the Metamon Game is his decentralized wallet address–similar to the United States of Mars. The two available games at the moment are Metamon Island and Lost World:

The user can deposit RACA and convert it to the U-RACA platform using the built-in exchange:

Once a user enters the game, he is greeted with a welcome screen that allows him to choose between farming and battling. The game requires U-RACA to play. Regular RACA coins can be converted to U-RACA. A user needs to deposit at least 50 U-RACA ($0.1 equivalent) to play the Beginner levels.

Once the U-RACA is available, a user can purchase one of the Metamons and start battling. The user can watch the battle unfold over 30 seconds or skip it for the final result: 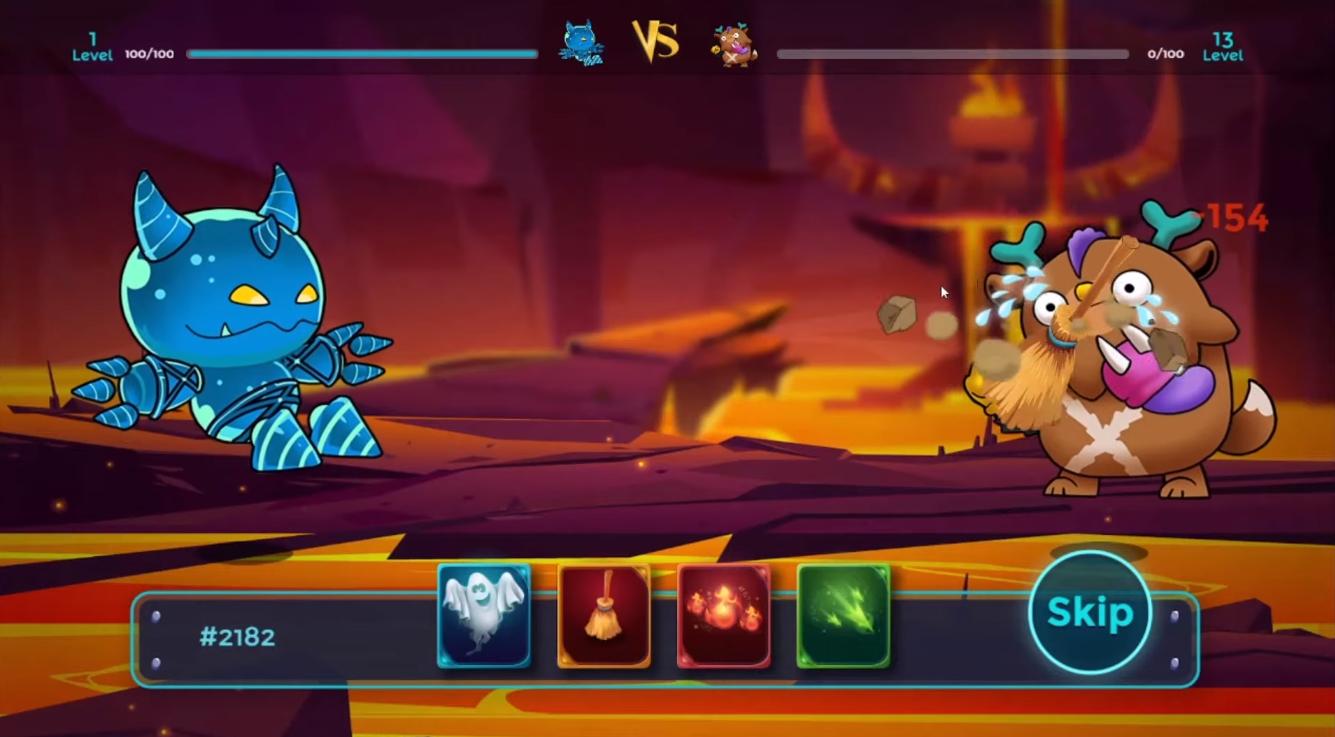 If the user wins the battle, he earns Metamon Experience Points (EXP) and Metamon Fragments. Fragments are important for developing more powerful Metamons. The game requires 1000 Fragments to mint an Egg which hatches into 1 Metamon or 1 Diamond. Users can also join the staking pools to uncover rare NFTs on the platform: RACA Coin Price – Is it Worth Investing In?

The official Radio Caca crypto is RACA. The Raca coin price is $0.0019 with a market cap of $560 million, making it among the top 10 largest Metaverse cryptos and the 220th largest overall. There is a maximum supply of 500 billion tokens and 300 billion (70%) are currently in circulation. Nearly 15% of the supply has been burned.

The initial distribution for the RACA coin was as follows:

The coin can be traded on centralized exchanges (CEXs) such as Phemex and DEXs such as Uniswap (UNI) and PancakeSwap (CAKE). It was launched in August 2021 at a price of $0.00024 and peaked to an all-time high of $0.012 within 3 months. This represented an ROI of over 2,000% for early investors.

Consistent with the overall crypto market and Bitcoin’s downtrend since Dec 2021, however, its price has declined, as with most altcoins.

At the same time, the bullish case for the RACA coin is that with a 70% circulating supply, it is much larger compared to that of other Metaverse projects, which only releases 5 to 10% of the supply and diluting it progressively. This indicates that the price could retain its bullish performance in the long-term.

New features are being added and there is a possibility of a layer-1 RACA coin. If the RACA DAO releases a Layer-1 for the platform, it would be the first Metaverse token with its own native blockchain.

How to Buy/Trade Radio Caca (RACA) Token on Phemex?

Phemex offers both spot and contract trading for investors to choose from. However, for beginning crypto buyers, spot trading is recommended. To buy RACA on Phemex, follow the instructions below.

1. The first step to buying cryptocurrency on Phemex is to go to the Phemex homepage, register for an account, and select Markets.

2. On the Markets tab enter RACA into the search bar on the top right, immediately after, the RACA/USDT trading pair will appear below – select Trade to move on to the next step.

3. You will then be redirected to the Phemex trading platform for the RACA/USDT pair. To do a simple spot trade we recommend doing a market order where you can buy RACA at the market price. To do so, select Market, enter the amount of USDT you want to buy of RACA, and click Buy RACA.

Radio Caca is a large Metaverse project that may take new gamers some time to navigate, but has proven to be rather addictive. Interested gamers can start by setting foot on the United States of Mars to explore the planet, and then move on to the Metamon game and battle using NFT Metamons.

The team intends to gradually unveil key features such as new states in the UMS and fresh battlegrounds for Metamon with a possible native blockchain in the future.

To start playing, follow the guide above to purchase RACA on Phemex and send it to your wallet.