OHLC charts graphically represent price action over a set period of time for assets such as bonds, stocks, commodities, and cryptocurrencies. When combined with other financial tools, these charts are a great way to predict price movements. 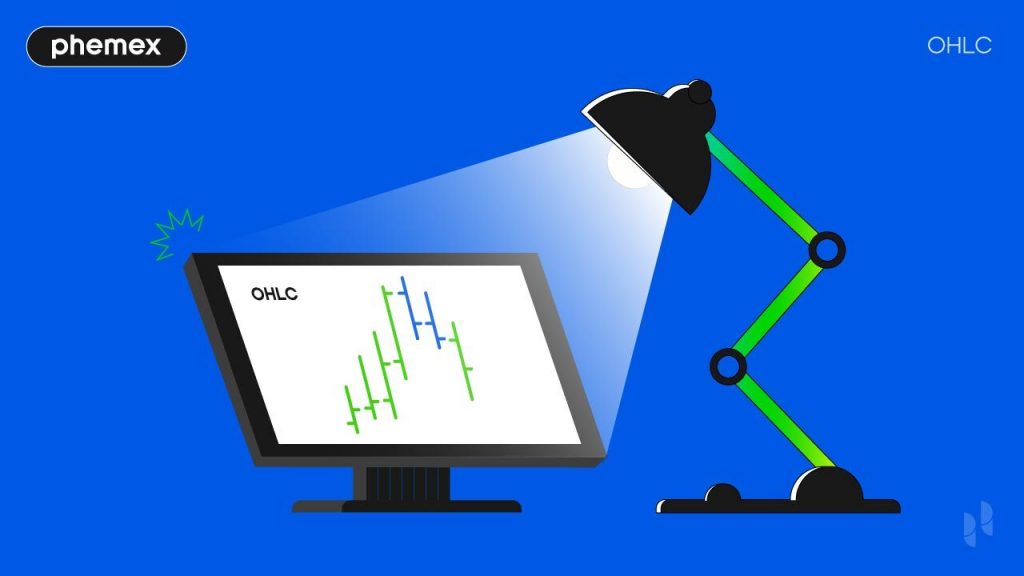 What Does OHLC Stand For?

The abbreviation OHLC stands for four criteria of an asset’s price over a specific period of time:

Prices are determined over a specific period of time, such as a minute, hour, day, or week. Different symbols can be used to represent the four criteria collectively, and these symbols are often plotted into an OHLC chart.

An OHLC chart illustrates a number of sequential OHLC symbols that visually represent the open, the high, the low, and the close of an asset during a period of time. A sample OHLC bar chart is illustrated below. 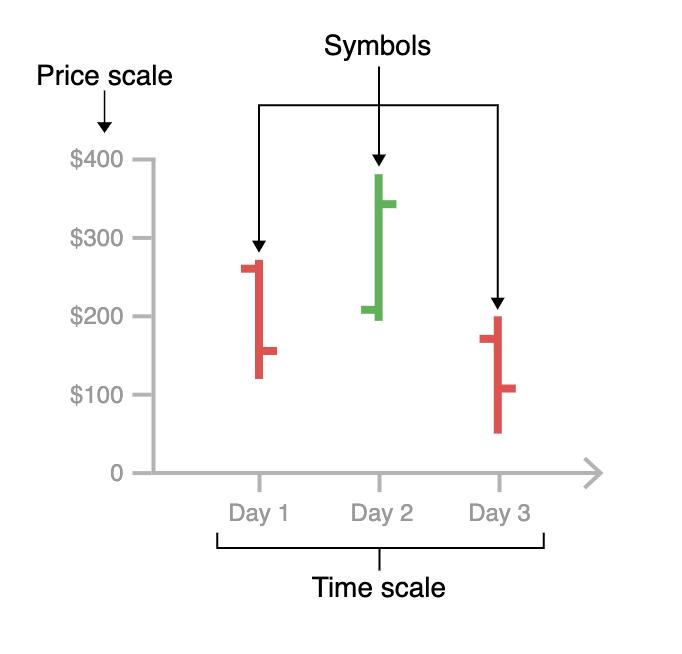 This chart includes three OHLC symbols plotted along an x and y graph. The y-axis represents a pricing scale of the asset. Here, the pricing scale extends from $0 to $400.

This bar chart also includes one OHLC symbol for each of the segmented time periods. For example, the first OHLC symbol in the sequence (denoted in red) represents the four OHLC price points for the asset during the first timing segment of the sequence (Day 1).The composition of each of these symbols will be discussed later in this article.

How Are Different Types of OHLC Chart Symbols Structured?

There are generally two types of bar chart symbols: a bullish symbol and a bearish symbol. 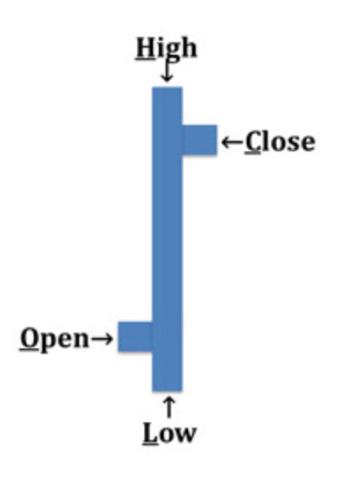 Shown above is a bullish OHLC bar chart symbol. This symbol includes multiple visual cues that represent the price action of a particular asset over a period of time:

The image below represents a bearish bar chart symbol. 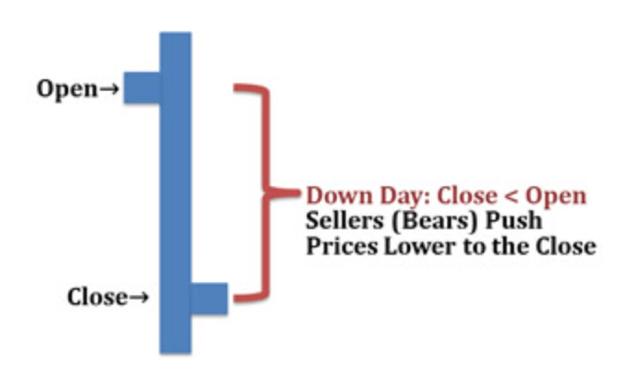 In this bearish OHLC symbol, the closing price — “close” — is lower than the open price — “open.” Therefore, this symbol designates a bearish time period. This is what traders refer to as a “down day.” In a down day, sellers are active in pushing prices lower to the close of the time period.

Like the bar chart symbol, a Japanese or candlestick symbol is a way to graphically represent the open, high, low, and close price points. 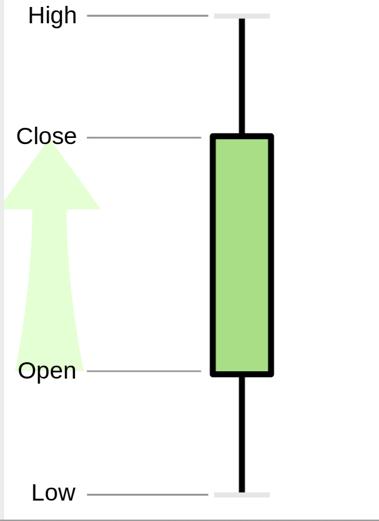 This candlestick symbol represents a bullish symbol, since during this time period, the price moved from a lower open price to a higher close price (as noted by the green arrow).

For certain charts, when the close was higher than the open, the rectangular body is filled in (here with green) or is all black as a quick visual cue. A green or all-black candlestick body represents a bullish symbol or an up day.

Alternatively, an empty rectangular body or one that is colored red designates that the open was lower than the close. Such a candlestick body represents a bearish symbol or a down day.

Depending on the asset’s price action, candlestick symbols may also include two “shadows” or “wicks.” The first extends above the rectangular body and the second extends below the body. The shadows designate the highest and the lowest prices achieved during the designated time period. As we will see, some symbols may not have shadows or wicks.

Below is an example of a bearish candlestick symbol. 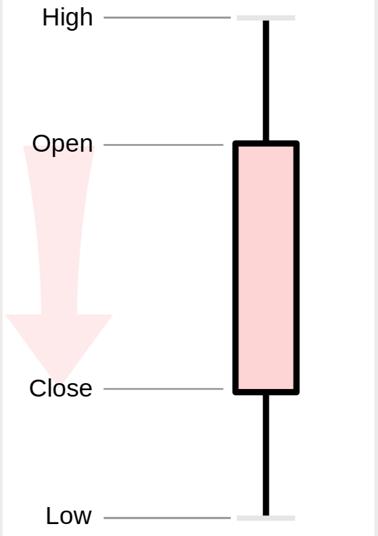 In this symbol, the open is above the close (as noted by the red arrow). Because it is a bearish candlestick symbol, the rectangular body is colored red.

How To Read an OHLC Chart?

Several techniques are used to interpret OHLC symbols. We summarize a few of them below.

The position of the open and the close tells technical traders where the asset opened and closed relative to its high and low.

The market may be undergoing a period of indecision where the open and close are close together, as neither buyers nor sellers could make much progress in either direction. If the close is far below the open, the asset experienced strong selling during the period.

Alternatively, if the close is far above the open, it shows that there was strong buying during the period.

A sequential clustering of a number of colored green bars can represent an uptrend. And during a downtrend, more red bars than green bars often appear. These types of clusters can provide information on the trend direction and the strength of the trend.

What are Some Common OHLC Symbol Patterns?

Certain commonly occurring OHLC symbols are used to predict potential entry and exit trading positions. A few of the more popular symbols are described below.

A Doji symbol occurs when the open and close prices are generally equal to one another. The lengths of the Doji’s high and low shadows can vary. If symbols occurring before the appearance of a Doji are bearish or red, the asset may be about to experience a bullish trend. 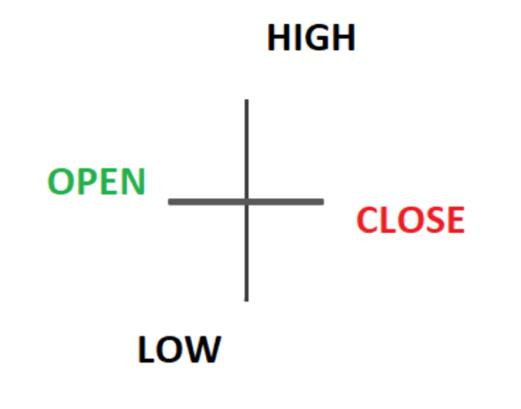 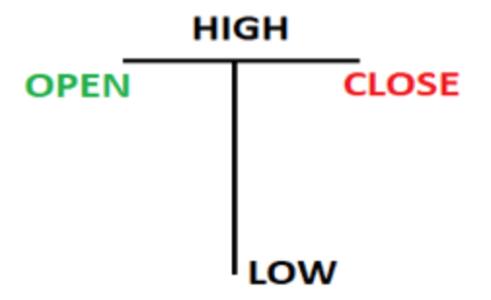 A Dragonfly Doji is a symbol typically formed when the open and the close prices are at the highest of the day. Note that there is no upper shadow stemming from the high. A Dragonfly Doji will typically represent a bullish trend if it has a longer lower shadow. In addition, when the Dragonfly Doji appears at a pricing bottom, the market may be moving in a reverse direction. 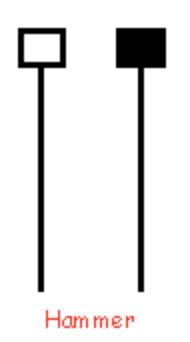 The hammer can be either a bullish or bearish candlestick. It consists of a small body near the high, with little or no upper shadow and a long lower shadow. Both illustrated hammers above are considered bullish if they are formed during a bearish trend. 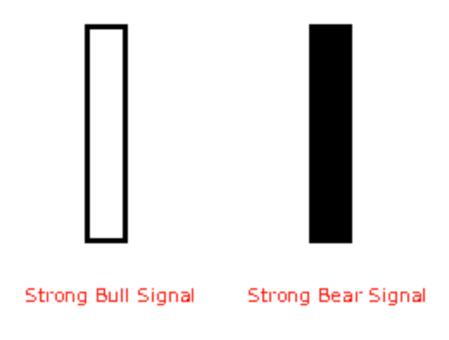 Marubozu signals are represented by a long candlestick main body with no upper or lower shadow. These signals can either be bullish or bearish.

A bullish Marubozu signal comprises of a long main body and is formed when the open equals the low, and similarly where the close equals the high. This signal indicates that buyers controlled the price of the asset from the start of the trading period to the close. It is therefore considered a strong bullish signal.

The above illustrates a Bitcoin (BTC) OHLC candlestick chart based on one-minute time segments. This chart illustrates a few of the common OHLC symbols summarized above.

For example, at around 14:01, a sequence of two red candlesticks demonstrates the start of a downtrend, even though the Open of the second candlestick is greater than the Close of the first candlestick.

Then, a green Doji appears. Since the symbols occurring before the appearance of this Doji are bearish, this Doji is an indication that BTC is about to experience a bullish trend. Which is does, starting at 14:04.

This bullish trend continues until a bearish hammer appears at 14:06. As this hammer is formed during this bearish trend, it is considered bullish signal for an uptrend.

A short bearish trend follows thereafter, until a bullish Doji provides an indication of a possible bullish trend.

Both types of OHLC symbols — bar symbols and candlestick symbols — are excellent tools for predicting an asset’s price action. With a glance, these symbols quickly and succinctly tell the trader four important characteristics of a particular asset over a set period of time: the open, the high, the low, and the close.