Blockchains and decentralized platforms are slowly making the Metaverse a reality, with virtual worlds, virtual real estate, play-to-earn Metaverse gaming, non-fungible tokens (NFTs), and cryptocurrency taking center stage. As these virtual worlds grow, gamers and developers alike are becoming inspired to become a part of it and build their own worlds. One platform enabling true independent creation on a decentralized platform is NFT Worlds. The platform’s native token, WRLD, is trading at $0.23 a token with a circulating supply of 485.8 million WRLD for a market cap of $111.4 million. 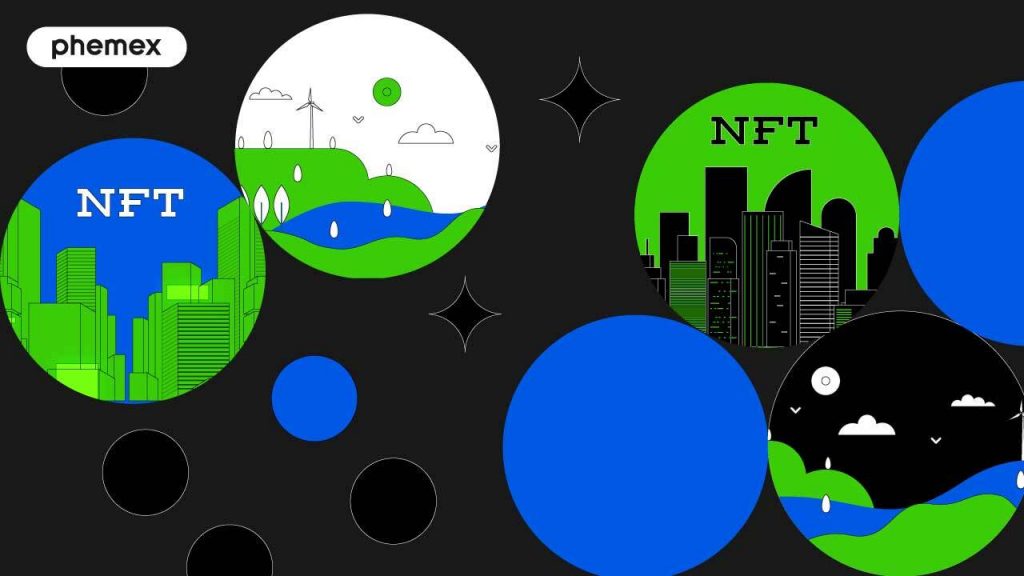 What Is NFT Worlds?

NFT Worlds is a decentralized, blockchain-based gaming platform created as part of the ongoing exploration into the digital and decentralized space, and ultimately into the future Metaverse. As with any decentralized platform that integrates aspects of finance to govern or run its platform, among other functions, NFT Worlds also has a native cryptocurrency — the WRLD token. NFT Worlds was launched on October 6, 2021, as a decentralized platform which allows users to build and create any world they can imagine in the Metaverse. The platform, which runs on Ethereum, currently holds 10,000 worlds, each of which is completely 3D and equipped with portals so that players can jump from world to world. These worlds together make up an expansive, decentralized, multiplayer Metaverse game, where gamers can create worlds with unlimited experiences and possibilities.

Each NFT World is made up of two components:

What Is the WRLD token?

The WRLD token is an ERC20-token, meaning it’s an Ethereum token, but it’s also run on the layer-2 scaling solution, Polygon. This means increased scalability and lower gas fees, with NFT World founders claiming they have “developed a first of its kind gasless transaction system to remove all crypto-related friction for in-game transactions.” WRLD functions as NFT World’s native currency and its utility token. It has the following functions:

How Does NFT Worlds Work?

The NFT Worlds virtual world platform prides itself on being the only truly decentralized NFT-based Metaverse game out there. What the founders mean by that is that if any of the centralized servers belonging to these other games goes down, players will lose all functionality and access to their NFTs and content. With NFT Worlds, however, this is not a concern thanks to its decentralized set-up — something the founders call a “multiplayer architecture,” or “high level architecture.” This architecture is achieved in the following way: This software is used by all NFT Worlds players and works by automating the installation of NFT World specific Minecraft mods, quality of life visual upgrades, blockchain specific UI, and more. This way players will always have access to their NFT World assets, such as Minecraft NFTs, WRLD tokens, and more. The launcher interacts with an Ethereum smart contract that acts as a world server router. This informs the player, in a decentralized manner, as to where the server for the world they want to access is hosted and tells them how they can connect to it. All world owners have control of defining the connection details for their world within the World Server Router contract.

The NFT Worlds server is open-source and can be used by any world builder on the platform. This means that the player/builder can access all the necessary baseline compatibility required to build a world, and then host it on any cloud-based hosting provider, their own hosting infrastructure, the NFT Worlds hosting service, or others, regardless of whether they use Windows, Linux, or others. Additionally, world owners familiar with Minecraft server mods can add additional functionality into their world, thereby opening endless possibilities for their games, including first person shooter mods, RPG type mods, or anything else. World owners can also integrate their world with the WRLD token and create play-to-earn games.

Each NFT world is built in a pixelated form, similar to what is seen on Minecraft, and each world is comprised of multiple NFTs (or Minecraft NFTs since they are all pixelated, as per Minecraft’s style) which are built by the players and stored in a decentralized way. NFT Worlds already counts with around 10,000 of these worlds and is still expanding, meaning that NFT Worlds is creating a type of Minecraft Metaverse.

The reason for choosing this type of style and infrastructure, is that the NFT Worlds’ developers already had experience working in Minecraft, and by building the gaming platform on top of an existing open-source gaming ecosystem (Minecraft’s), they could jump ahead. This means that over 100 million Minecraft gamers are already familiar with the game controls used on NFT Worlds, and the platform can make use of cross-platform support, giving players access to NFT Worlds through the Minecraft game on PC, Xbox, PlayStation, Nintendo Switch, and more thanks to its open-sourced server bridging systems. This kind of bridging will mean wider awareness on the project in the gaming community and offers users with different gaming preferences the ability to play and build on the platform. It’s perhaps thanks to this that NFT Worlds is currently listed as the top Virtual World platform on OpenSea, above the likes of Sandbox and Decentraland.

NFT Worlds is the “Top NFTs” in the Virtual World space. (Source: opensea.com)

By utilizing Minecraft’s infrastructure and building upon it, NFT Worlds has enabled players using console games to participate in blockchain games. Currently players need to manually connect to the server through a DApp, however, this takes less than a minute to do. Connection is made by using a packet bridging layer available in the NFT Worlds’ open-source server — thereby creating cross platform play through bridging. 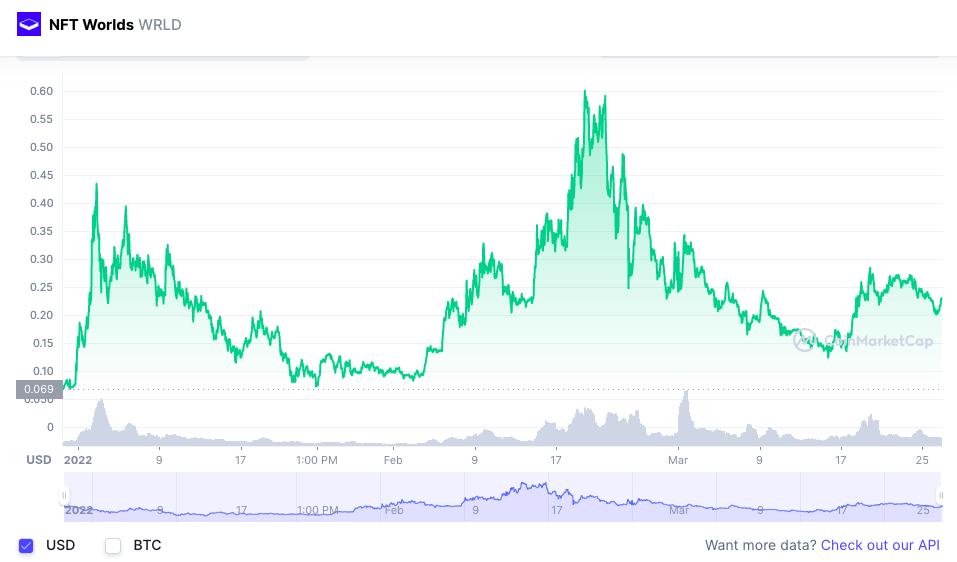 Considering that 2022 has been a time of a fairly continuous bear market, NFT World’s progress can be seen as a positive indicator for its future performance, although it must be said that its value has taken a slight turn since its February highs — dropping to lows of under $0.14 earlier in March. NFT Worlds’ growth will be reliant on it achieving a wide userbase, as well as it being able to keep up with other high-profile gaming metaverses, such as Decentraland, Sandbox, and Yuga Labs’ soon-to-be-launched MetaRPG. One exciting development still to come for NFT Worlds which may help it stay in the game will be its playable 3D NFT character partnerships, which are scheduled for April 2022. One thing that can be said for certain, is that the Metaverse and Metaverse gaming are developing quickly, and it will need all hands on deck to keep up, but with such strong technology and the ability to play across platforms and hardware, NFT Worlds is certainly well placed. NFT Worlds offers gamers, developers, and crypto investors alike the chance to get involved with a quickly evolving and exciting platform. By being built on the existing Minecraft open-source gaming ecosystem and offering open-source code, NFT Worlds makes it easier for a wider audience to build as they do not have to learn an entirely new system. Not only that, but its addition of bridges to allow gamers to play from their preferred hardware systems or consoles opens up the platform to a much wider audience and expands the reach of blockchain and decentralized finance (DeFi).

NFT Worlds means that anybody with a bit of imagination and skill can create their ultimate universe through the use of Minecraft NFTs. Not only that, but world owners can earn an income from their world, whether by staking the world, renting it out, or collecting fees from players for experiences and services. Players, meanwhile, can explore around 10,000 worlds, going on adventures and using portals to jump between each one. Finally, as a truly decentralized Metaverse gaming platform, NFT Worlds hands over ownership of assets, NFTs and worlds to the world owners and players.

In a time when the Metaverse, NFTs, and play-to-earn gaming are becoming increasingly popular, with billion-dollar companies such as Yuga Labs and Meta making headway in the space too, it remains to be seen if NFT Worlds will be able to keep up. Undoubtedly, however, NFT Worlds is an exciting step in the transition to a true Metaverse. With its ability to attract a large Minecraft fan-base, as well as the fact that increased compatibility may be seen with other Ethereum networks later on, it’s a platform with lots to offer and lots of space to grow.