What is Kishu Inu: Ponzi or Next Blue-Chip Meme Coin? 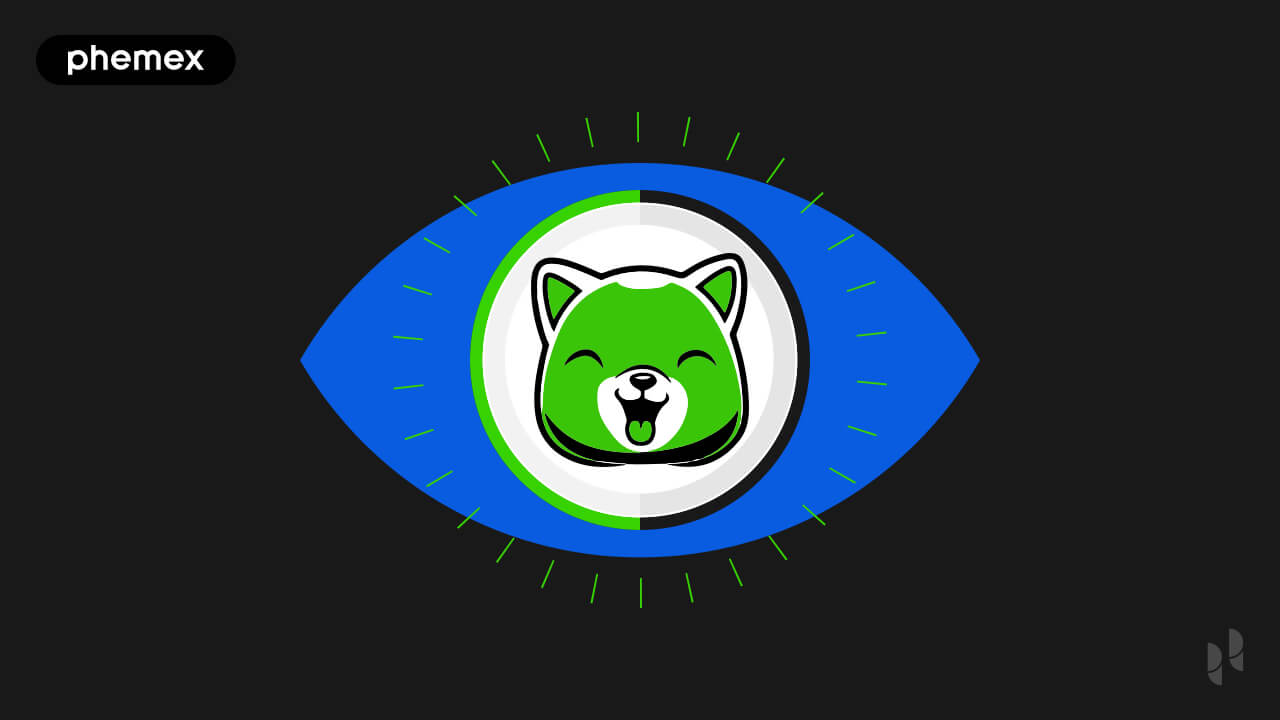 What is Kishu Inu Coin?

Kishu Inu (KISHU) is a meme coin running on the Ethereum blockchain launched on 17 April 2021. It functions as the utility token used to run its decentralized ecosystem, comprising:

First, the not-so-unique. Like every other meme coin, the sole purpose of KISHU seems to be for nothing else except to be bought and held.

What it touts as its biggest selling point–a 2% reward to all KISHU holders for every active user transaction i.e. if you buy the coin, you get a commission from every future sale of the coin.

Kishu Inu believes that, unlike other meme coin projects, it will be able to encourage blockchain and crypto adoption by providing many functionalities on one platform.

According to its whitepaper, Kishu Inu sets itself apart by introducing “next-gen” concepts, such as participation rewards and NFT sales in one place. Future Kishu Inu plans include listings on payment platforms and a non-profit merchandise store to boost real-world utility.

If one looks at its roadmap, the first 2 phases were about growing its number of token holders before utility development comes into the picture i.e. raise money from investors first, then decide how to actually make money and get a business going.

Only in cryptoverse does this happen–in the traditional startup fundraising world, you kinda have to prove your business case before investors put money in.

In any case, let’s take a look at how the Kishu Inu team is planning to give their token a reason for its existence.

The main thing, at least for now, seems to be the KISHU Crate, an NFT Marketplace where token holders can stake KISHU in exchange for NFT rewards created by artists from community contests. The artists are awarded prizes out of the KISHU staking pool. In other words…KISHU gets its value from the demand generated by NFT artists, who in return get rewarded by…KISHU.

We’ll leave it to investors to decipher the business case here (notably, the project won “Best Community Token of 2022” at the Crypto Expo Dubai.

Who owns Kishu Inu coin and when was it created?

Kishu Inu coin was launched in April 2021 by an anonymous development team. Its inspiration for the dog meme was, no surprises–Dogecoin. This anonymity re-enforces their desire to be 100% decentralized, however, their statement on Coinmarketcap stating that “especially attentive followers can get more information and hints on Twitter” somewhat casts doubt on the idea of the project being entirely selfless. 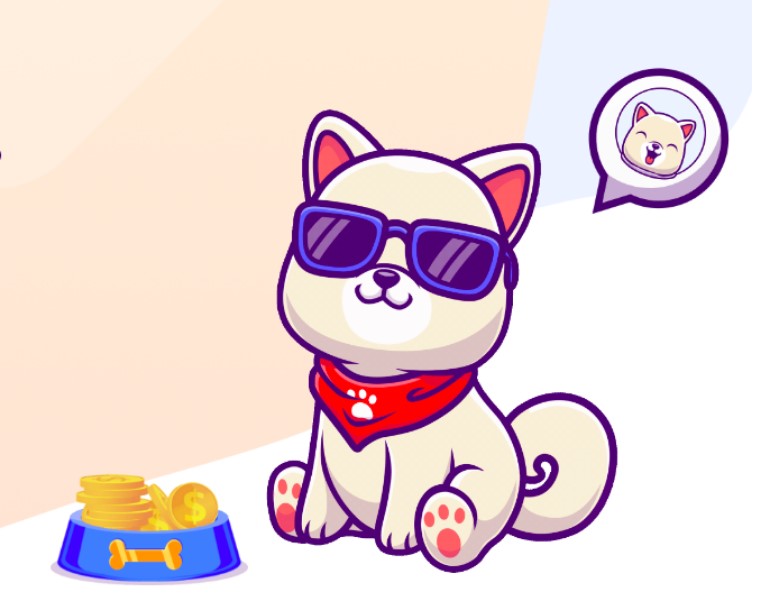 Kishu Inu’s dog icon is inspired by the success of the meme coin Dogecoin. (Source: kishu.com)

How many Kishu Inu coins are there?

Kishu Inu has a maximum supply of 100 quadrillion coins, with a current estimated circulating supply of 96.8 quadrillion KISHU; 3.2 quadrillion have been burnt since launch.

How many Kishu Inu token holders are there?

There are currently 257,607 addresses holding the Kishu Inu coin, with the top 100 KISHU holders holding 52.45% of the supply; the top 10 holders hold 36.41% of the supply. In other words, over half the circulating KISHU supply is held in 100 wallets and over a third is only in 10 wallets.

This may seem fairly centralized, but in contrast, the top 100 wallets holding its competitor’s coin, Shiba Inu (SHIB), hold 81.97% of the total circulating supply, while the top 10 holders hold 62.89%.

Why is the proportion of token holders of importance? The fear is that token whales could coordinate a pump-and-dump scheme by sending token prices upward and then mass-selling the coins at peak value, causing prices to plummet and hurting small investors. As such, prospective investors should take this into consideration before deciding to invest in KISHU. 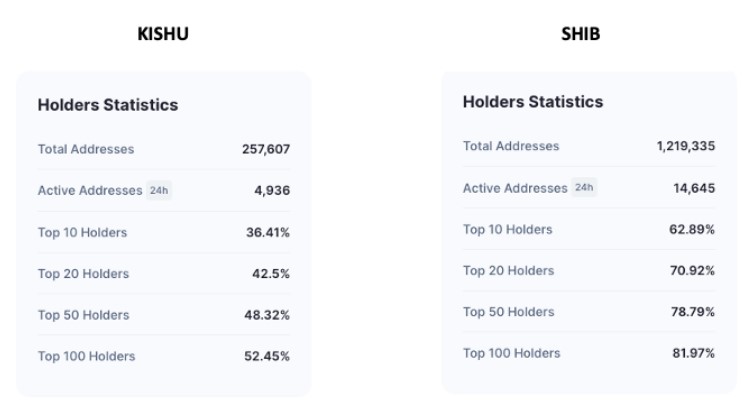 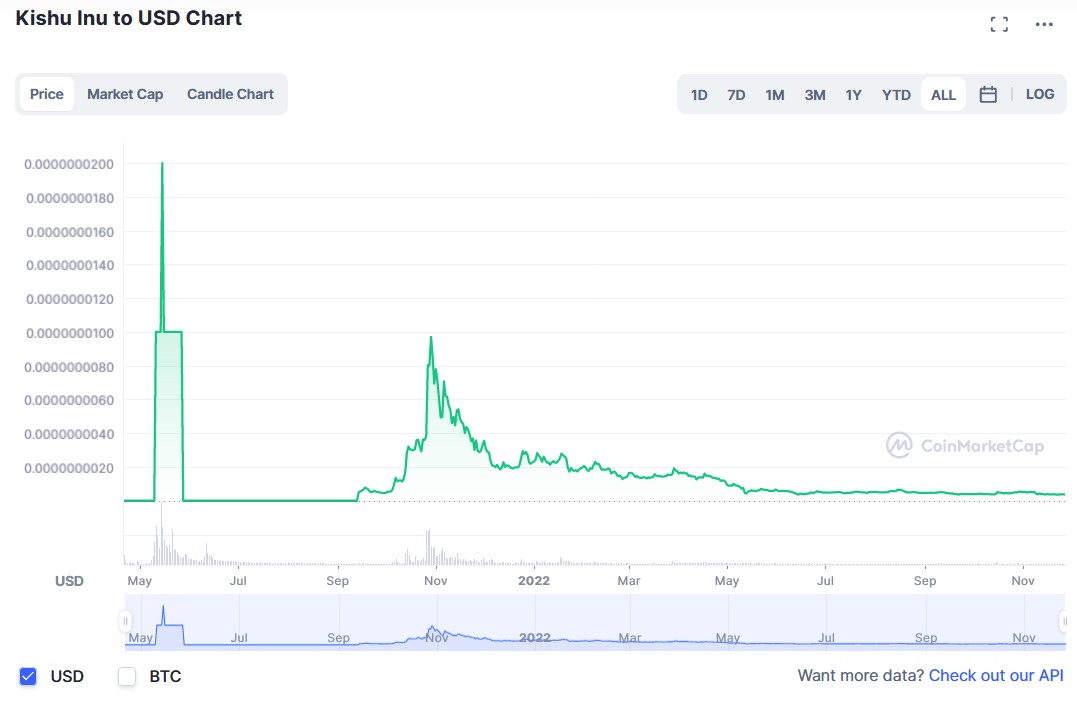 At the same time, it is still holding somewhat strong at 445% above its all-time low of $0.000000000069 in April 2021. As the Kishu Inu coin burn continues and interest increases, the coin could regain territory.

Speculators should beware, however–just because it has fallen by 98% from peak does not mean it cannot fall another 50%. Best to limit your position size with this one.

The question behind this question is really, “Is the market big enough for yet another undifferentiated meme coin?”

As of now, Kishu Inu does not offer anything ground-breaking, and parrots the usual spiel about being “decentralized” and community-centric.

True, its reddit community ranks in the top 5% by size on the platform; its Telegram has almost 70,500 members, and its Twitter has over 496,000 followers. Its NFTs can only be earned and not bought.

If it is able to grow its network and actually embed real-world utility value into its token, it may become a serious contender to its far more established predecessors, but for now, it’s too early to say if KISHU will be a good investment.

How to buy Kishu Inu coin

The Kishu Inu (KISHU) coin can be bought directly from the Kishu exchange or decentralized exchange UniSwap.