Following the 2021 crypto crash, many DeFi platforms saw an enormous surge in investment, which resulted in a massive inflation of their market cap, causing price predictions to go through the roof. However, some of these rapidly emerging companies have been described as potential scams, with practices that resemble “Ponzi/pyramid schemes” to concerned onlookers. Hex Coin (HEX) is one such company caught up in these allegations – but just how true are they? Hex Coin (HEX) is a financial tool – a type of peer-to-peer (P2P) staking system that was launched on Ethereum in December 2019. All HEX transactions are verified by validators on the network without the need for an intermediary; thereby embodying the foundations of decentralized finance (DeFi).

The enigmatic founder of Hex Coin, Richard Heart, has high aspirations for his company. He has stated he intends to improve upon Bitcoin and improve the financial industry by building the best performing asset in mankind’s history.  Unsurprisingly, such lofty goals being expressed by a relatively young entrepreneur have driven sceptics of the platform to label the entire operation a scam. 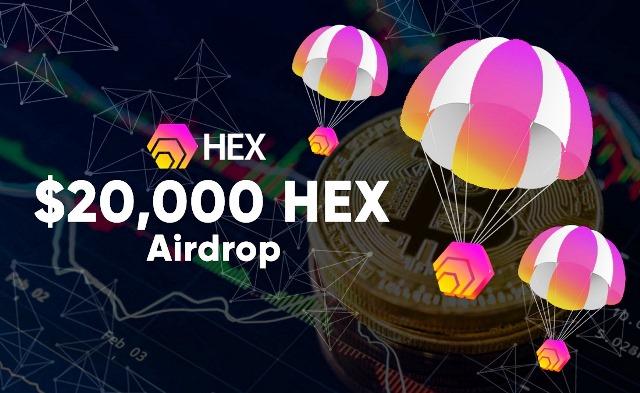 HEX is an ERC-20 token, so it functions on Ethereum’s network and is smart contract-compatible. Initially, BTC holders could become early adopters of HEX by claiming a small quantity free, or earning it through a crypto airdrop. This marketing method is similar to those adopted by retail companies. It involves rewarding a prospective user with the company’s native altcoin for activities that promote brand awareness, including:

Currently, the most common way for users to acquire HEX is through UniSwap. Using such exchanges is beneficial as they use smart contracts to facilitate automated transactions between different cryptocurrencies.

How Is Hex Coin Structured?

Hex Coin uses a proof-of-work (PoW) consensus algorithm, similar to that employed by Bitcoin (BTC), but is hybridized to also contain the functions of a proof-of-stake (PoS) consensus algorithm. Thus, investors lock away (stake) a small portion of their funds to aid transaction verification — the larger amount they stake, the more transactions they can help verify. In exchange, investors obtain interest on their staked currency – allowing them to earn a passive income without needing expensive equipment (which is needed for mining). The more HEX an investor stakes, the higher the potential for returns.

What are the risks associated with Hex Ccin?

However, there are risks associated with this PoS business model:

Crypto price fluctuations: Due to the volatility of the cryptocurrency market, staked funds can suffer large price drops, which can minimize or even completely negate interest-based profit. Additionally, it can be difficult to extract a staked investment in time to prevent losses due tominimum lock periods.

While some may be critical of PoS, this has not stopped Hex Coin from using it to its full advantage. Capitalizing on a lack of serious competition during its start-up in 2019, Hex Coin has made moves in recent years to establish itself as a form of “crypto bank.” Instead of miners, the company uses stakers to create its platform’s digital backbone; paying them interest for depositing their capital in much the same way a bank does. This blended consensus protocol has become a central part of Hex Coin’s business model, a system they refer to as Proof-of-wait (PoW), rather than PoW/PoS.

An Example of how HEX’ Proof-of-wait works

Here’s an example to visualize this system:

If 9.3% of all HEX in circulation is staked, each staker will receive a yearly interest of 39.9% of their stake. The lower the percentage of total HEX staked, the higher the interest stakers will receive (as they have more “duties” to fulfil), as per the image below. 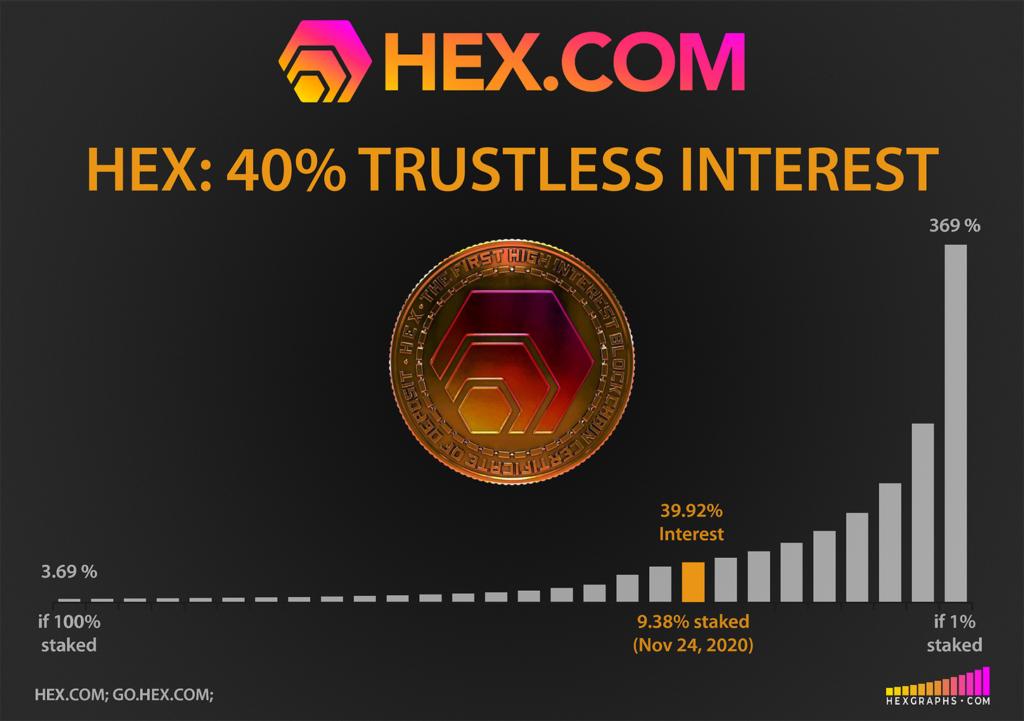 Is Hex Coin a scam?

Embroiled in controversy since Hex Coin’s very start-up, Heart’s critics are many and varied; from commentators on Reddit’s numerous sub-reddits to Peter McCormack, host of the “What Bitcoin Did” podcast. 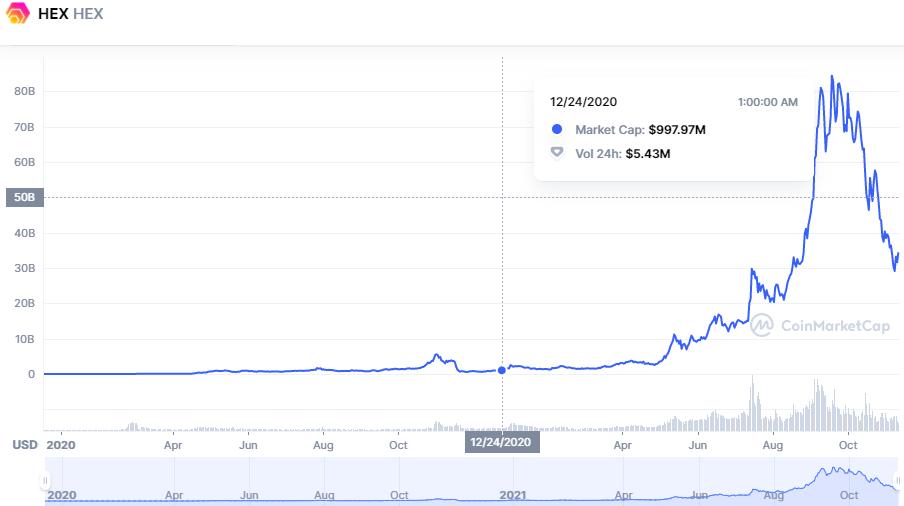 Coming across the cryptocurrency during its nascent stages, Richard has spoken on numerous occasions of how he ended up investing when Bitcoin was still around $1 USD, all thanks to Reddit. While this seems rather ironic, especially as it is on Reddit that Heart and Hex Coin have drawn the most criticism – Mr. Heart himself seems unmoved by this observation. Making a large fortune from his early Bitcoin investment, Richard Heart founded Hex Coin in late-2019 (and PulseChain – a Hex Coin fork – earlier this year). Heart is regularly seen on YouTube, and has been featured on various media publications over the years – often with polarizing results. He is known for his gaudy dress-style and jewelry.

When indicators and analysts pointed out that, in all likelihood, Hex Coin would reach a market cap of $1.1 billion USD by the end of 2020, this was huge news — and it did, though only just. Limping its way over the finish line, Hex Coin reached a market cap of over $1 billion USD (with days to spare) on the 25th of December 2020. But this was all before the 2021 cryptocurrency crash, and the massive boom that followed for the industry shortly afterwards.

By the 8th of September 2021 – less than a year after HEX reached this significant milestone – its market cap value was almost 80x what it had been just nine months earlier. While the company had experienced a fairly steady rise in popularity over the intervening eight months, it was during August 2021 that the company’s meteoric rise truly became apparent. During this month the market cap almost doubled, a feat which Hex Coin then repeated during a period of just nine days, at the beginning of September 2021. 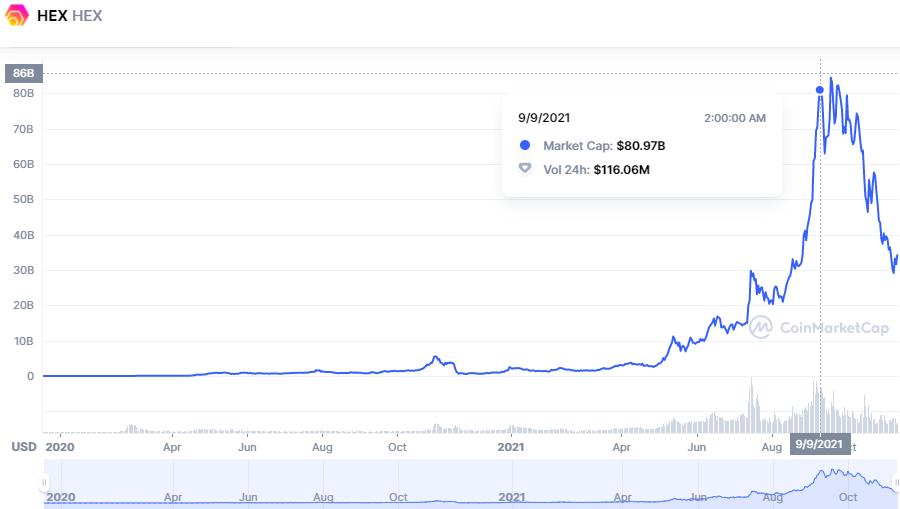 Today, HEX’s value stands at around $0.19 USD; a significant drop from its $0.50 USD value a couple of months prior. Likewise, HEX’s market cap, which today stands at around $33 billion USD; a high figure, but a large fall from the soaring heights of over $80 billion USD it has reached previously. However, despite HEX’s volatility, its rapid and huge rise in value not once, but twice, suggests an ability to recover and lingering interest.

While Hex Coin’s business model, practices, founder, and marketing may come across as questionable, there’s little question that HEX has made very profitable returns for some investors. But caution is advised. For those that feel they can afford the loss should things go wrong, however, it might be time to start looking at HEX a little closer.

← What Are the VTHO and VET Coins: Power the VeChainThor Platform
Getting Paid in Bitcoin and Crypto: A New Trend? →
About