What Is Cardstack: The CARD Token Explained

Founded in 2014, Cardstack (CARD) is a revolutionary experience layer that turns blockchain technology usable and scalable by breaking down app silos in favor of a truly decentralized digital world. At the time of writing, CARD trades at over $0.005 per token with a circulating supply of more than 2.3 billion, leading to a total market cap of over $11.5 million. 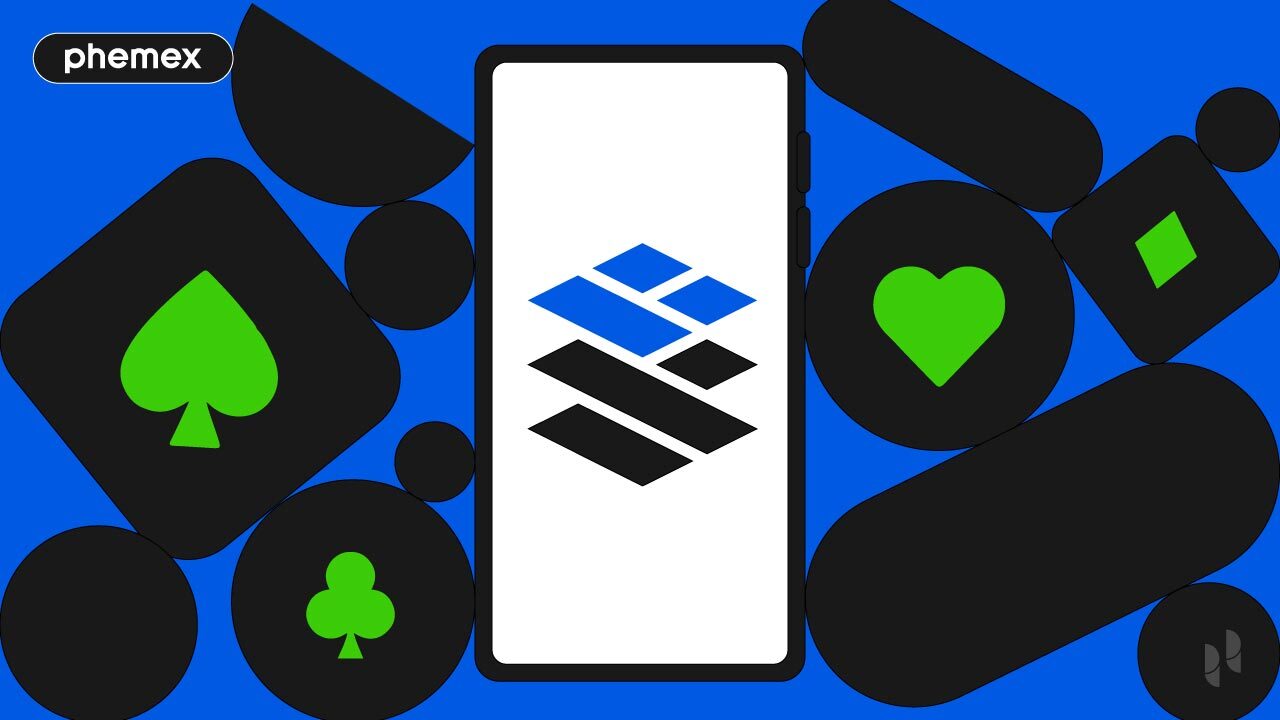 Early blockchain technology like Bitcoin brings to the world the advantages of a decentralized network, yet it has only delivered gains to a small number of crypto fans. Cardstack strives to become a leap forward for blockchain at every layer of the software stack. With Cardstack, end-users can mix and match features from numerous apps or dApps without having to handle a bunch of separate cloud subscriptions or utility tokens. What makes Cardstack more interesting is that it allows users to design new workflows by joining services from different layers of the Internet.

This is made possible by Cardstack’s distinct composable design paradigm, which renders units of information as bite-sized, encapsulated cards. These cards can then be expanded, embedded, attached, chained, triggered, versioned, cloned, approved, rescinded, and saved permanently.

Developers can utilize the Cardstack Framework, a comprehensive Software Development Toolkit (SDK), to create card-based blockchain apps. Users can build anything using modular narrative and discovery containers. The Cardstack team has already come up with a narrative container that matches the features of a Web content management system and also a discovery container that assists in forming the foundation of a personalized recommendation system.

It’s reported that conversation and workflow containers are currently under construction. These containers will help facilitate distributed workflows between parties of various levels of trust in a hybrid on/off-chain network.

In addition, developers can easily construct custom workflows using the Cardstack Hub, an architecture based on the software design pattern, namely “Command Query Responsibility Segregation” (CQRS) that enables the integration and orchestration of data and value transfer across multiple blockchains and the cloud. Furthermore, the Cardstack Hub is equipped with plug-ins and ready-to-use functionality such as searchable indexes, real-time notifications, uniform user permissions, and flexible containerized deployment. This makes everything on Cardstack extensible and fully open-sourced.

What is the Cardstack Token?

Cardstack ecosystem uses a native utility token – Cardstack Token (CARD), an Ethereum-based ERC20 token. The maximum supply of CARD is theoretically 10 billion. However, to encourage the participation of software makers and analytic miners early in the project’s adoption cycle, Cardstack will mint and allocate 4 billion extra tokens over ten years. Then, the smart contract will automatically stake newly minted tokens in reward pools and then allocate them to active makers and miners.

Unlike other cryptos, CARD is explicitly designed for a sustainable marketplace where open-source developers can get fair rewards while users can curate and group several software services to fit their demands.

Here is an illustration of CARD’s utility in a real-life scenario. When a user spends CARD, it seamlessly forms smart contracts between the apps and the user prior to being staked into a reward pool. The smart contracts track the anonymized usage data, and then the pooled tokens are periodically distributed to the apps’ creators and contributors based on a decentralized algorithmic payment and governance model that highlights the power of the community.

Similar to other crypto, CARD users are miners who validate transactions and earn fees. Yet, distinct from Bitcoin, which compels miners to solve mathematical equations, Cardstack analytic miners’ job scope is to help calculate the reward function of who gets paid out what while concurrently eliminating spam, making the system fair and resilient.

Cardstack applies a consensus mechanism called Proof-of-Analytics that randomly selects, queries, and rewards analytic miners through a sortition scheme. This consensus, also known as Tally, tackles early consensus drawbacks such as long waiting times, high gas fees, and absurd resource demands. It solves these drawbacks with cryptographic proof-of-usage messages that are efficiently validated and aggregated off-chain before reporting the final payment splits back to the smart contract on-chain.

Chris Tse is the founding director as well as the head of product of Cardstack. He is also the co-founder of Monegraph, a platform that helps digital creators construct licenses for the commercial use of their digital work. Previously, he was the head of research and development of McGraw-Hill E-Labs, a leading education administration program for millions of educators, learners, and professionals worldwide. He was also the senior director of innovation of Businessweek, a business news media outlet. He holds a degree in computer science from Columbia University.

Ed Faulkner is the lead developer of the Cardstack Project. He is also concurrently the founder of Polynomial LLC, a Cardstack-affiliated consultancy that leads strategic software development projects. He was formerly the software consultant of MIT Media Lab, in which he taught industry best practices to software developers. He holds a Master’s degree in computer science from MIT.

Hassan Abdel-Rahman is the senior blockchain developer of the company. Prior to joining Cardstack, he was the engineer of Monegraph and McGraw-Hill Education. He was also a senior software developer of Sun Microsystems, a wholly-owned subsidiary of Oracle Corporation that focuses on IT services and consulting. He holds two degrees in mathematics and computer science from the Colorado School of Mines.

Meanwhile, Cardstack collaborates with top legal and tax advisors in the blockchain space so that its token mechanisms and fundraising structure comply with national regulations. MME is the advisor for the Switzerland-based Cardstack Foundation. It helps the foundation structure and conduct the Token Generation Event (TGE) for the ecosystem. McDermott Will & Emery is the legal partner for the US-based Cardstack Syndicate Inc. It advises the organization during and after the TGE on operations, business arrangements, and regulatory compliance.

Cardstack also partners with crypto marketing and communications consultancies, such as Wachsman. It assists Cardstack in strategy and consulting, public relations and strategic communications, marketing, and founder and CEO advisory.

From an initial price of over $0.006 on July 4, 2018, CARD’s price dropped to below $0.005 at the end of July. Then, it remained steadily below $0.005, with most of the time under $0.0015 for more than two years that followed. Finally, in March 2021, several good news regarding the project was released, including the Card Pay protocol deployment to the mainnet and xDAI chain, the responsive adaptation of the Cardstack application as well as Cardstack wallet’s enhanced connection to additional third-party APIs. This leads to CARD’s price rise to over $0.01.

In April 2021, the integration of exchange rate oracles on CARD protocol enabled customers and merchants to settle payment transactions at an agreed-upon exchange rate. Also, the use of Gnosis Safe on the xDAI chain helped the Cardstack wallet achieve gas-free transactions. This positive news was the potential engine behind the following CARD’s price spike, which resulted in CARD hitting its all-time high of more than $0.04 on May 11, 2021.

While it may seem that CARD is now in a bearish trend, its price remains above $0.0035. At the time of writing, CARD trades at over $0.005 per token with a circulating supply of more than 2.3 billion, leading to a total market cap of over $11.5 million. CARD currently ranks #889 on the cryptocurrencies market capitalization leaderboard of CoinMarketCap. 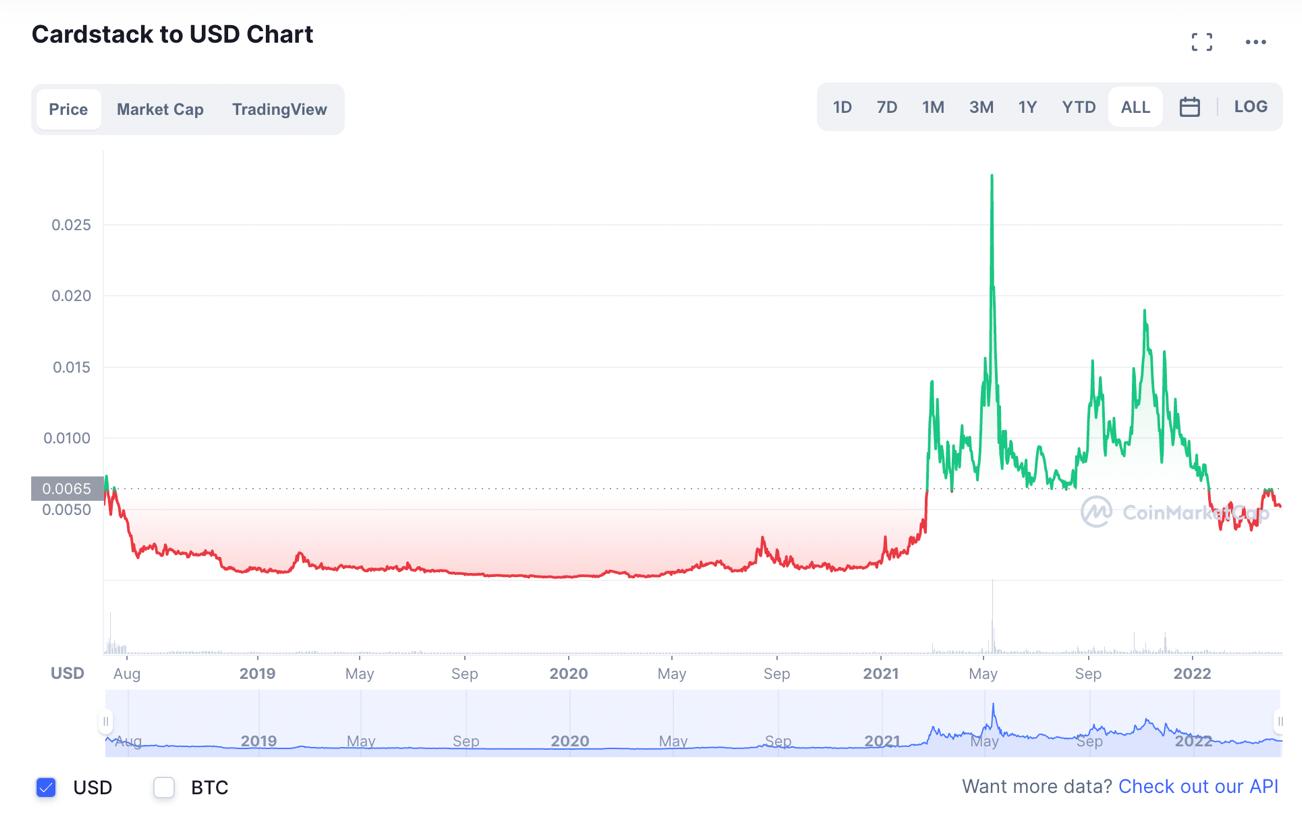 What Is The Future of Cardstack?

According to the project’s latest update, the Cardstack team has completed the first deployment of the Card Reward Protocol. It’s an off-chain computation protocol that applies Merkle proof, a cryptographic concept, to govern on-chain distribution. It’s also designed to be open-ended, meaning that it can support reward programs from third parties that have their tokens distributed based on other analyses of on-chain data.

Cardstack has also redesigned the Card wallet to allow users to create a primary persona represented by their card.xyz user name. Plus, they can use the wallet as a primary smart contract wallet to interact with Web3 applications. This improvement not just supports Cardstack-specific protocols like Card Pay and Card Rewards but also popular protocols like DEXs, staking services, and other marketplace protocols.

Moving forward, the team will keep up the effort to make it easier to design, develop, and deploy Cardstack experiences to any channel where end users are active. The project also plans to introduce user-controlled machine-learning plug-ins to Cardstack Hub, which will then assist users in automating common workflow decisions so as to lift the velocity of interactions on Cardstack-based business networks.

Cardstack is a revolutionary experience layer that turns blockchain technology usable and scalable by breaking down app silos in favor of a truly decentralized digital world. It strives to become a leap forward for blockchain at every layer of the software stack. With Cardstack, end-users can mix and match features from numerous apps or dApps without having to handle a bunch of separate cloud subscriptions or utility tokens. Moving forward, the team will keep up the effort to make it easier to design, develop, and deploy Cardstack experiences to any channel where end users are active.