The world urban population is exploding. According to UN estimates, the number of megacities with 10+ million residents will double by 2030. The concept of “Smart Cities” leverages smart technology to tackle those challenges and improve the lives of residents. Future smart cities could use blockchain technology, potentially leading to the creation of a “Crypto City.”

Blockchain is an application that stores data on a ledger. Blockchain for smart cities is a new concept that would integrate a blockchain with the Internet of Things (IoT) – the technology powering smart cities. The blockchain ledger could be used for commerce, supply logistics, public administration, voting systems, public transport, energy, waste disposal, and more.

The latest-generations blockchains can do lot more compared to Bitcoin (BTC). Blockchains that are smart contract-powered can store and transmit data about a citizen that would serve as a virtual ID associated with their blockchain wallet. This would integrate crypto technology with existing tech and help with turn every smart city into a crypto city. 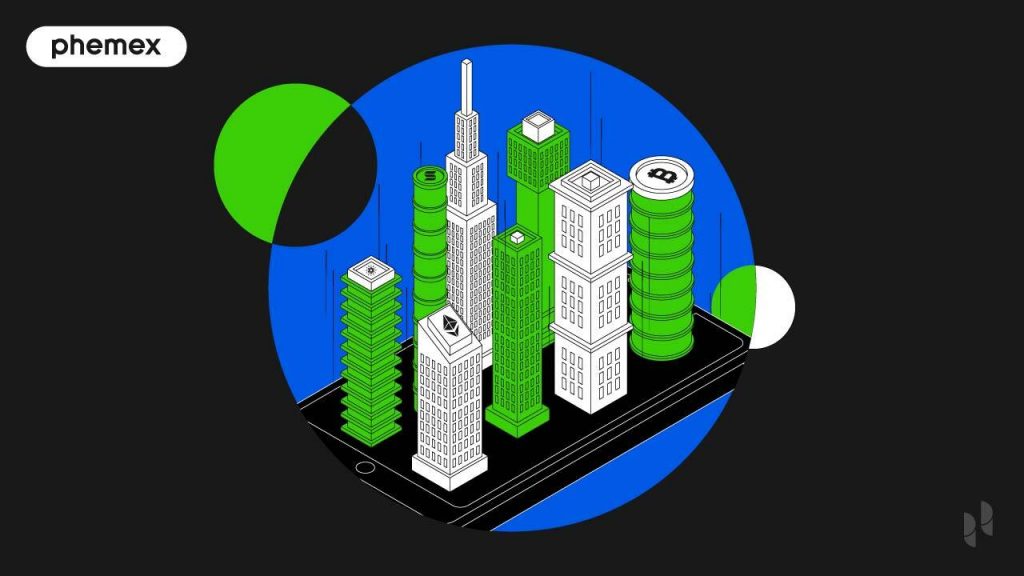 How Do Smart Cities Work?

The concept of “Smart Cities” was coined by IBM, an American software development company. Their idea was to connect cities around the world to technology based on the centralization of data in the city administration – this would effectively allow technology to be widespread in a city and controlled by a single entity. For example, the traffic administration could control the light sensors for traffic lights and the transport administration could control the flow of metro trains in the subway. Most cities in the Western world today are smart cities by definition.

Smart cities were taken to the next level in the 21st century with the widespread use of the internet and new electronic devices. The collective communication network of smart cities is known as the “Internet of Things” (IoT) and is designed to bring solutions for the urban area as a whole.

One example of a smart city powered by IoT would be checking the amount of parking spots available in a certain parking lot and paying online. Another would be enjoying a bike-sharing program and using an app to pay for the rental. The infrastructure behind smart cities matters. For instance, smart cities can have sensor-activated lights that dim when there are no pedestrians or vehicles on the road to conserve energy.

The data provided by the collective IoT network is stored online – often in cloud services that are centralized. Services such as Amazon Web Services are used by city administrations to collect the data and back it up on the cloud. This gives them security benefits such as the ability to review camera footage or recover from a hack on one of the administration services.

Cryptocurrency and Blockchain in Smart Cities

Blockchain technology is not the same as cryptocurrency. Cryptocurrency only leverages blockchain to enable payments. Think of a blockchain as a database that uses timestamps to store data points. Each data point is called a “block”. The first blockchain was actually used in the New York Times in the 90s to timestamp documents and verify their authenticity. Instead of using the database to send payments as on Bitcoin, future smart cities could use blockchain to power smart services integrated with the IoT.

Modern cryptocurrencies can be integrated with smart cities to process trillions of dollars worth of payments without requiring third-party authentication. Bitcoin was the first cryptocurrency, but it was not programmable which means that important data couldn’t be transmitted over the network. Ethereum (ETH) was the first programmable blockchain with the implementation of “smart contracts” – data that could be used to transmit valuable information such as user ID or insurance data.

5 Applications of Blockchain for Smart Cities

The primary function of cryptocurrency is to serve as a payment service and replace fiat currency. In a future digital city, Bitcoin or one of 300,000+ other cryptocurrencies could be used to process payments for everyday shopping. A smart-contract enabled blockchain such as Ethereum could link a user’s wallet to their digital ID and enable them to pay for their electric bill or a parking ticket.

Private businesses are currently taking charge by accepting Bitcoin payments and allowing users to pay with crypto online. Despite that, this is not the same as a government implementing smart payment policy. If a supermarket accepted Bitcoin, this would not make the city a smart city because it’s a private entity. However, if a city administration allowed citizens to settle their debt with blockchain, this would elevate their status as a smart city.

Blockchain databases can be used to store voting data for citizens that would be irreversible and verifiable on the ledger. A blockchain voting service would guarantee election integrity because there’s a limited amount of citizens who can vote and the votes are irreversible – making it very difficult to cheat during an election cycle. A blockchain could be created for the duration of the election and deleted after the elections are over.

In a city administration, the government could collect tax records and save them on a blockchain. This would allow them to review historic submissions and calculate tax rates based on the bracket. All forms of electronic administration could benefit from a blockchain system. If the tax system was blockchain-based and citizens wanted to know how much tax they owed on real estate, a smart contract would inform the citizen how much tax they owe based on the current rate.

Public transport and vehicle-sharing initiatives can be efficiently managed using blockchain services. For one, the public transport system relies on a network of buses or metro trains that adhere to a certain schedule. Each connected bus could serve as a node on a blockchain and input data about departure and arrival times, making it easy to track in real-time for citizens. It would give the transport administration an easier time keeping track of driver’s performances and punctuality.

Bike-sharing programs are one of the hallmarks of smart cities. Smart cities often manage tens of thousands of bicycles to wean off automobile dependency. Blockchain could make it easier to keep track of bikes in the city. If each bicycle comes with a built-in tracker, the user could sign a transaction using their wallet that would trigger the start of a bike rental. Once they sign off they can be billed and the administration would automatically get their funds without relying on third-party payment services such as Visa or MasterCard – they could run their own blockchain.

The energy sector is imperative to every smart city. A megacity can consume millions of dollars worth of electricity within minutes only to illuminate the streets at night. Energy-efficiency is one of the core objectives of future cities and sensors are being implemented to strategically dim the lights and conserve energy. The IoT communication network in the energy sector could be improved by blockchain by developing a web of lights connected in the city and dimming them strategically.

City officials can use the data obtained through blockchain analytics to carefully design future energy networks throughout the city. For example, they could test a sensor-activated lighting system on one end of the city and record the data on the blockchain. They could run the same test on a regular lighting system in another part of the city and compare the results. If the sensor-activated system conserves energy, they could discount the existing system and save billions of dollars from the city budget.

Waste management is a major issue in cities around the world as massive resources are spent on waste collection and disposal. Thousands of garbage trucks and employees collect waste in the early morning hours and drive it outside the city limits for disposal. Smart cities have figured out that the best way to manage waste is to install sensors that would pick up when a trash bin is empty.

A blockchain-based waste management system would save time for employees by deploying garbage trucks to areas most affected and tracking the emptiness of each bin in the city. This way the staff can get the job done more efficiently and focus on urgent areas. The city could initialize recycling programs to reward people who recycle their garbage. For example, for x number of bottles a citizen could be paid a reward in crypto.

Are There Downsides To Blockchain In Smart Cities?

Blockchain implementation is not flawless. The blockchain concept as a data storage ledger goes one way – this is as much of a limitation as it’s an advantage. Let’s say a person wanted to pay their tax bill over blockchain, but later they find out they’re eligible for refunds.

If the administration can’t change their payment on the ledger, they won’t be able to give them back the money unless a special policy is designed to send money from their official wallet. Data that needs to be erased from the records will not be erased because the chain of blocks continues permanently unless it’s completely destroyed.

Domestic administrative officials would have to develop their own blockchains to cater to their citizen’s needs. This raises security concerns because if the management of a blockchain system is centralized, there is a single point of failure and it could become a subject of cyber attacks. Services that use smart contracts can be hacked or breached unless they’re thoroughly vetted.

The final step in the evolution of smart cities might be the partial or complete integration of blockchain technology. The development of “Crypto City” could also be on the horizon. Smart cities around the world have not yet introduced their own blockchain services, but private businesses have taken initiative and hundreds of thousands of crypto ATMs and payment services were deployed worldwide.

Blockchain integration carries risks as blockchain technology itself is still developing. Few attempts have been made to build a Crypto City – Blockchain Nevada was a failed project and El Salvador’s government is currently pushing for the development of an all-Bitcoin city that would test the limits of blockchain integration in a smart city. If one of these projects succeeds, we are likely to see wide-scale crypto adoption internationally.