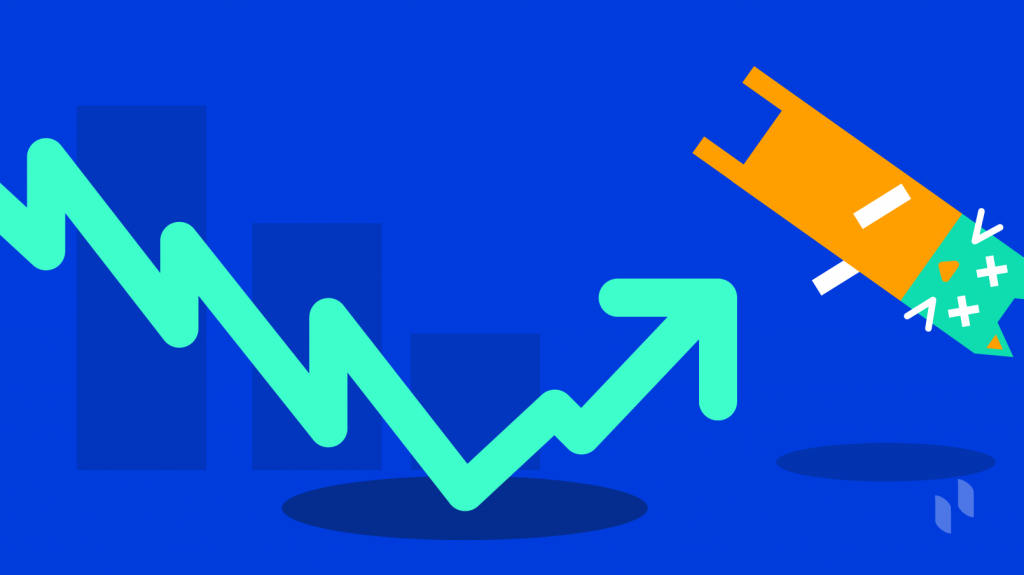 Volatility is a term that strikes fear into the hearts of hedge fund managers and retail investors alike. The potential risk of losses often overshadows the fact that it can lead to impressive gains, but volatility isn’t always bad. Newer investors that analyze the markets without distancing their emotions are far more affected by volatility. Still, the dead cat bounce is a chart pattern that kicks the entire market when it’s already down.

Hope can be a powerful emotion. A declining asset price isn’t a sight for sore eyes, but a move back into the green can push hopeful investors into dangerous positions. Any kind of financial market can be highly volatile, and sudden price fluctuations due to speculation aren’t entirely uncommon. The purchase and sale of assets drive price fluctuations and lure speculative traders into making money off of them.

The crypto market is incredibly volatile and is still an emerging space with a market cap of only $1.4 trillion, a trivial amount compared to gold’s $8 trillion global market capitalization and the US stock market’s $28 trillion figure. Cryptocurrencies are currently not governed by regulations in most countries, and their prices are primarily driven by the law of supply and demand. The more prospective buyers, the higher its price.

The blockchain and the cryptocurrency markets are only a little over a decade old. It is still in its nascent stages, and there is immense scope for improvements in its technology. However, there are still some significant concerns regarding its safety and regulation, leading to market speculation. The crypto market is not alien to the financial situations faced by other long and short-term markets.

Despite evidence of a prevalent declining trend, some traders buy back into an asset at the bottom of a bearish rally, pumping up its price. However, once the market realizes the price increase is only from speculative interest, the asset usually dips even further below the previous low. This is known as a dead cat bounce, and it stems from market uncertainty.

What is a Dead Cat Bounce?

The term “dead cat bounce” comes from the Wall Street notion that even a dead cat will bounce if it falls from a great height. It represents a temporary positive market sentiment during a dominant bearish trend and is usually followed by a dip further down.

A dead cat bounce is observed when there is a temporary, short-lived recovery of any asset’s price after a prolonged decline. Usually, downtrends are interrupted by brief periods of recovery, during which the prices rise temporarily. However, these are generally false signals and shouldn’t be taken to indicate that things are improving. The sudden increase in price is likely temporary, preceding a much bigger fall to come.

Why is it called a dead cat bounce?

The term originated from the United Kingdom in the early 1980s, during its financial turbulence phase. In December 1985, journalists Horace Brag and Wong Sulong of the Financial Times also used the term to refer to the Singaporean and Malaysian stock markets’ bounce-back after their strong downward movements. Both national economies continued to decline and only recovered much later.

If we analyze the pattern more technically, a dead cat bounce is considered a continuation pattern. The first bounce appears to reverse the prevailing trend while being quickly followed by a continuous downward movement in price. Continuation patterns can be used to forecast the direction of significant price movements.

Dead cat bounce patterns are usually only identified after they have occurred and are almost impossible to detect in real-time.

How to spot a Dead Cat Bounce?

A dead cat bounce happens in three stages. First, the price of any asset falls sharply over some time. Then, the asset’s cost sees a sudden increase, which can appear like a reversal of the downward trend. Finally, the rising price comes back down, dipping lower than the previous low, and continues following a downward trend. 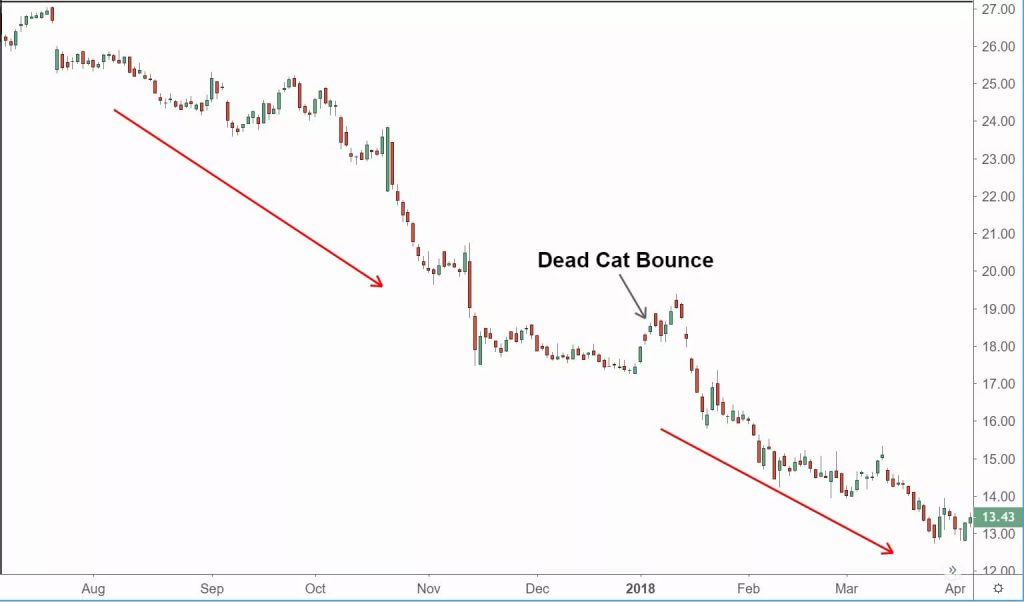 Investors hoping for a rebound after a steep fall can fall prey to the dead cat bounce, offering an illusion of bullish sentiment. However, the pattern is merely a response to the market’s prolonged downturn and doesn’t signify a fundamental shift in the market.

What does the dead cat bounce pattern indicate?

The dead cat bounce pattern can often indicate that an asset is a bad investment in the long run and isn’t worth the money. However, not all corrective moves during a bearish market can be classified as dead cat bounces. Unless the price was moving in a steady downward trend, falling below the previous low after a very brief retrace, it is not considered a dead cat bounce.

The cryptocurrency market has always been unpredictable due to its unregulated nature and speculative price movement, which has led to several dead cat bounce occurrences in the past. At the end of 2017, Bitcoin’s price had risen to an all-time high value of $20,000 from the ICO bubble at the time.

When the bubble crashed, the cost of Bitcoin fell from $20,000 to nearly $3,000, but its decline wasn’t steady. Bitcoin’s inflated value bounced like a dead cat far more than once on its downward trail.

Bitcoin’s eventual recovery and rapid rise to its latest all-time high of over $50,0000 this year might have seemed unprecedented to some, especially given its response to the ICO boom in 2017. However, it does show how swollen the Bitcoin bubble had become, causing investors to exit as soon as they realized it.

It’s important to note that it’s the declining trend that causes a dead cat bounce, and not the other way around. The occurrence of a dead cat bounce doesn’t always signify gloomy days ahead. Sometimes the reason for the prevailing downtrend can resolve itself, pushing the asset back into a bull market.

What cause a Dead Cat Bounce?

Dead cat bounce patterns aren’t uncommon in most declining assets, and they can occur due to a variety of reasons ranging from fundamental to speculative interest.

The dead cat bounce is usually a reflection of investors’ belief that an asset’s price will soon go back up. Typically, investors might think that a declining cryptocurrency has reached a low point or that its underlying asset is undervalued. This can lead to investors buying more since their current price doesn’t reflect their actual value. This causes a dead cat bounce when a significant number of such investors jump on a particular asset, leading to a halt in its price decline.

Speculation from day traders and other short-term investors who buy declining assets in the hope of making small profits by capitalizing on fluctuations over the course of the day can also lead to a dead cat bounce. However, a more prominent cause of a dead cat bounce is when sellers exit their positions. If a particular cryptocurrency looks overvalued, traders short-sell it, expecting the price to fall.

This exit may lead to a flurry of buy trades for the cryptocurrency, with investors who want to buy in at a lower price. This can lead to a short-term rise in price and attract even more investors into the market, leading to a more short-lived price gain.

Price fluctuations in the crypto market are highly susceptible to the latest news developments and speculation around the market. Any negative account can bring prices down, and positive affirmation can lead to a jump in price. Sudden interest in any crypto project from such news can cause traders to flock to it. This can also lead to a sudden increase in its price until traders decide to sell their positions.

Can you predict a Dead Cat Bounce?

The dead cat bounce is a price pattern often used by technical analysts to study a market. It is a highly unpredictable phenomenon, making it challenging to learn even for skilled investors.

The dead cat bounce cannot be predicted because it doesn’t follow an obvious pattern. It mainly results from arbitrary market speculation and trading activity and is easily confused with the mid-day volatility of crypto price fluctuations.

How long does a Dead Cat Bounce last?

Additionally, the length of a dead cat bounce isn’t set in stone, and it cannot be estimated accurately either. It can occur for a few days or last up to several months. This unpredictability makes it incredibly tedious to accurately identify a dead cat bounce at the time of its occurrence.

Is a Dead Cat Bounce bad?

However, contrary to popular belief, a dead cat bounce isn’t always a bad thing. In fact, it can even be an opportunity for volatility-hungry day traders to make some significant gains. If traded wisely, the dead cat bounce can prove incredibly beneficial to both short-term traders as well as long-term investors. Short-term traders can profit from the small rally, while long-term investors and traders can initiate their short positions during the bounce.

They say a cat always lands on its feet, but a dead cat can only bounce. For this reason, it’s essential not to confuse a dead cat bounce with an asset that’s reversing back into a bullish movement. Long-term and short-term traders alike have seen how tricky the dead cat bounce can be, especially in the cryptocurrency space, where volatility is much higher.

While sudden market fluctuations can generate wild profits, one must stay informed about all relevant factors that can lead to such volatility. This can come in handy when you need to make a well-informed decision while investing in any long-term or short-term asset while minimizing losses and maximizing gains.

Bear markets are harsh, and when they tease investors with temporary gains after huge losses, it can push a lot of investors off the edge. It is vital to remain calm in these situations and look for more fundamental reasons behind market movements instead of following emotions.

A diversified, risk-adjusted portfolio may not directly protect your assets from sudden market movements, and it certainly won’t stop you from investing during a dead cat bounce pattern. However, it can help mitigate the risks they pose and produce more consistent profits over time.

← What is Ethernity? Bringing authenticity to the NFT space
What is Fantom (FTM)? Solving the Blockchain Trilemma →
About