September has been something of a stagnant month for Bitcoin, at least in relative terms. After breaking the significant psychological barrier of $12,000 in August, the bull market couldn’t sustain, with prices falling back down towards $10,000 in early September. For much of the rest of the month, BTC has been hovering between the $10,000 support and $11,000 resistance level. Nevertheless, the bellwether crypto looks set to finish the month closer to the top end of this range, thanks to a sudden rally on Friday, September 25.

This movement could be attributed to investors taking advantage of a weaker US dollar. The greenback usually shows an inverse relationship with Bitcoin and commodity assets such as gold. September has also seen the correlation between Bitcoin and gold reach new record highs, supporting this theory. 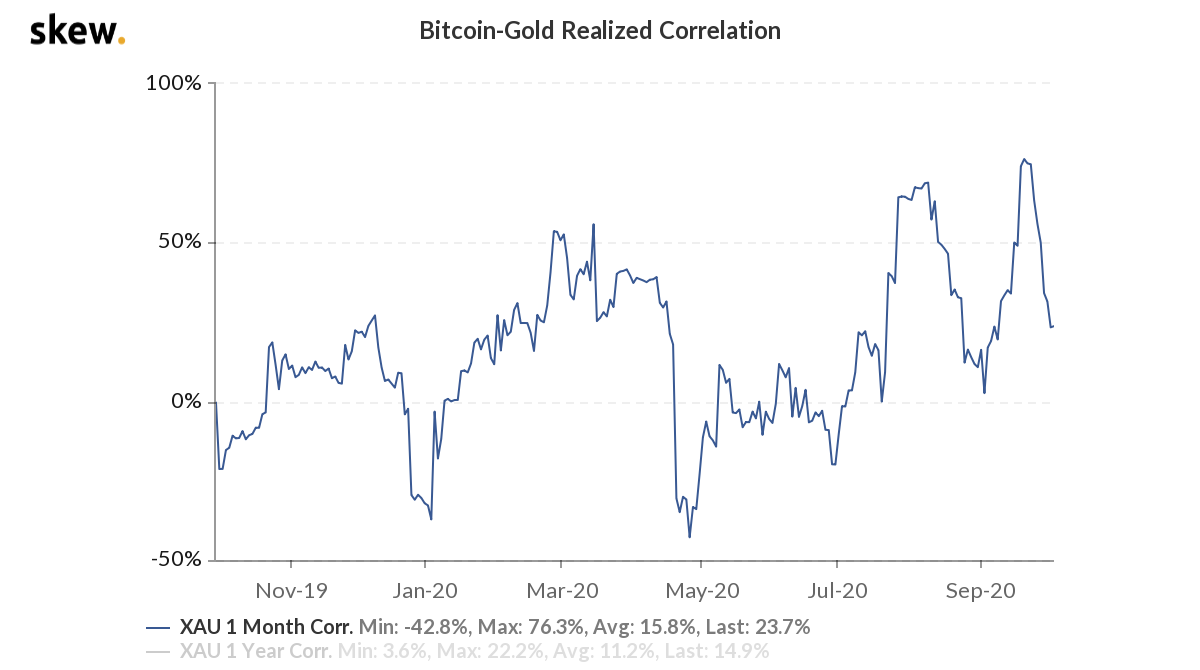 The BTC price managed to sustain its late September rally even despite the shock news of a KuCoin hack over the last weekend of the month. In the early hours of Saturday morning, KuCoin confirmed that it had detected some unauthorized withdrawals from the exchange’s hot wallets.

The exact amount that was stolen is yet to be confirmed. However, the value has risen from an initial estimate of $150 million to around $200 million. Although it’s unconfirmed, TheBlock researcher Larry Cernak indicated on Twitter that the value could be closer to $280 million, making it the third-largest hack in crypto history, after Coincheck in 2018 and Mt.Gox in 2014. 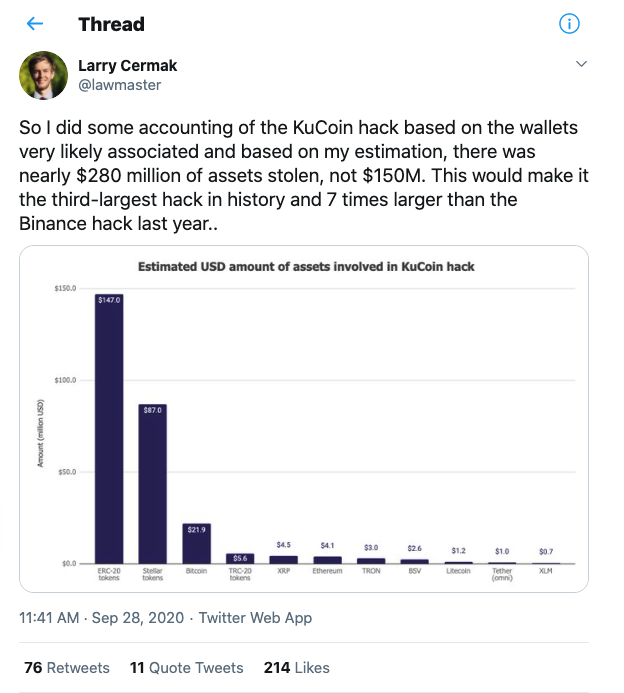 However, the critical difference is that the Mt.Gox attack was a hit on Bitcoin, and the Coincheck hackers stole NEM – both thefts of single cryptocurrencies. In contrast, the KuCoin hackers stole many different cryptos, with over $150 million in multiple ERC20 tokens, at least according to Cernak’s data.

Therefore, the price of Bitcoin barely flinched at the news of the KuCoin hack, going on to post further gains after the weekend. Furthermore, Bitcoin hit a new record on September 27, reaching 62 days above $10,000. The previous record was 61 days. Could this be the effect of May’s halving? It remains to be seen if Bitcoin can sustain itself above current support levels to retest the $12,000 resistance in October.

The Strangest Month Ever in DeFi?

In the August monthly roundup, we noted the continuing craze for DeFi, including what had been one of the oddest events to date – the rapid rise and fall of Yam Finance. In September, things only became “curiouser and curiouser” down the DeFi rabbit hole.

This month, it was yet another food-themed DeFi application making the headlines, with SushiSwap introducing an entirely new concept – “vampire mining.” Earlier in September, the project launched as a clone of Uniswap but with its own SUSHI token. The twist in the tale is that SushiSwap used Uniswap’s liquidity pools to mine SUSHI, ahead of a planned migration to mining the token using its own pools.

Within a week of SushiSwap’s launch, the price of Ethereum took a nosedive in early September, along with the rest of the crypto markets. SushiSwap’s founder, the pseudonymous Chef Nomi, decided to panic-sell over 2.5 million SUSHI tokens worth $14 million, causing outrage within the DeFi community.

As if all this weren’t dramatic enough, Chef Nomi later announced that he was handing over control of SushiSwap to the founder of FTX Exchange, Sam Bankman-Fried. Later, Chef Nomi also issued an apologetic tweet, confirming he had returned his tokens to the SushiSwap project.

While Bankman-Fried appears to have saved the project from dying completely, the value of the SUSHI token isn’t showing any signs of returning to its previous highs. 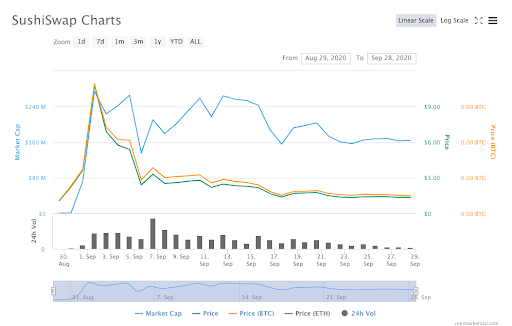 Copycat Creations – And a Loophole for Hackers?

In the wake of the SushiSwap drama, it seems that several copycat creations are now emerging. In particular, Binance’s newly launched Smart Chain has attracted competitors. Although each ostensibly claims to have its own subtle differences, BurgerSwap, BakerySwap, and PancakeSwap are all pretty much copies using the same principles as SushiSwap – offering a token as yield for using the platform.

The two biggest headlines of September – the KuCoin hack and the DeFi craze, finished the month intertwined, and not necessarily in a good way. In the immediate aftermath of the KuCoin attack, the exchange worked together with several other exchanges and projects to blacklist the hacker’s address, effectively taking back the tokens or rendering them useless as they couldn’t be exchanged. However, as of September 28, the attackers were exploiting the decentralized nature of DEX’s such as Uniswap, to exchange their tokens.

Although experts stated their belief that the hackers probably weren’t DeFi experts as they hadn’t taken full advantage of the potential for mixing services, the move illustrates that fraudsters could easily use DeFi to mask their illicit activities. Ultimately, this puts the entire DeFi movement at risk of being shut down by regulators if nobody can offer any security against money laundering.

One thing is for sure – dramatic events in the cryptocurrency sector continue to perform on a par with those occupying the rest of the 2020 news agenda.

← What are Altcoins?
What is Ethereum (Smart Contracts)? →
About