What Is the Hidden Divergence Trading Strategy? 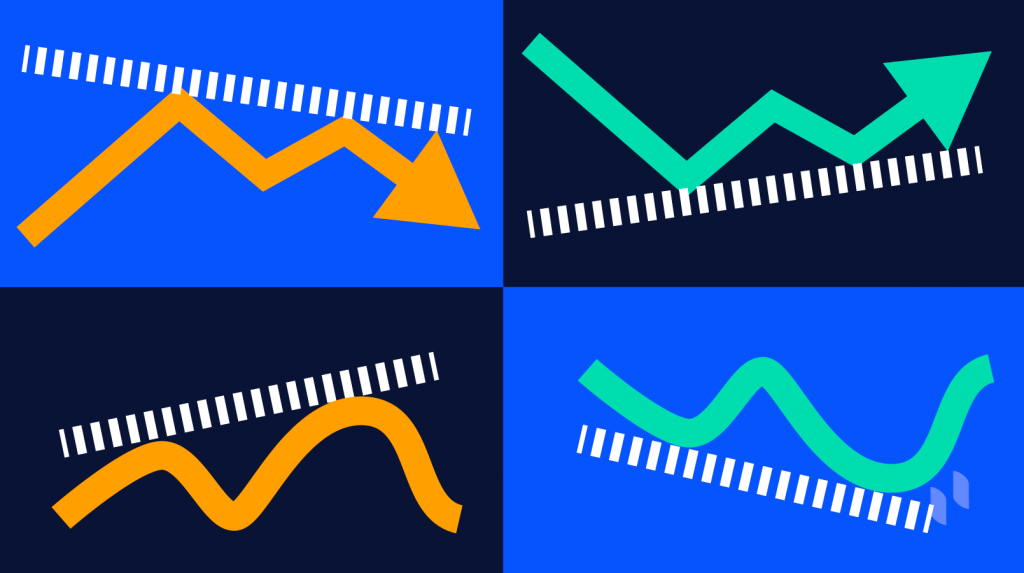 Divergence is a forex trading strategy regularly used by currency and cryptocurrency traders worldwide. It refers to the disagreement between the momentum indicators or oscillators, and the price. Commonly used indicators include relative strength index (RSI), stochastics, and moving average convergence/divergence (MACD).

In day trading, divergence helps traders recognize and react approximately to price trends. Divergence refers to the price and momentum being out of sync, meaning that there’s a higher potential for a correction or reversal. The value of an asset can only diverge up to a certain extent before a major price swing occurs and it returns to what the market believes it should be worth.

There are two types of divergence:

Regular divergence is especially useful to cautiously predict the end of a trend, while hidden divergence can be used as an indication of trend continuation. 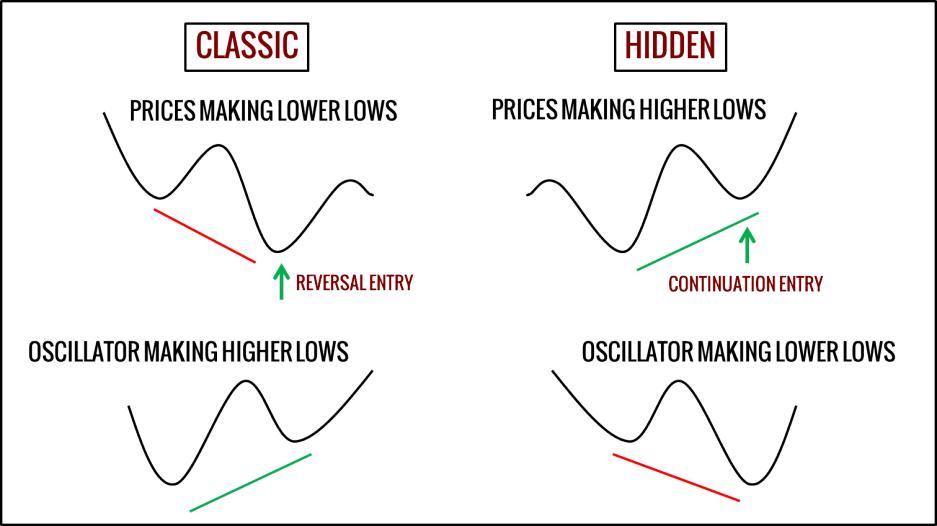 What Is Hidden Divergence?

Similar to regular divergence, hidden divergence can be bullish or bearish:

What is a Bullish Hidden Divergence?

Bullish hidden divergence occurs when the value of an asset makes a series of higher lows and at the same time, the indicator makes a series of lower lows. This suggests that the uptrend is still going strong and that the correction in value is merely profit-takinginstead of the emergence of strong selling. In this case, traders should seek to go long and buy the asset.

What is a Bearish Hidden Divergence?

Bearish hidden divergence happens when its price action forms progressively lower highs in the presence of progressively higher highs developed by the indicator. This implies that a downtrend is underway, and the reaction is merely for profit-takingrather than the emergence of strong buyers. In this scenario, traders should choose to go short and sell the asset.

How to Identify Hidden Divergence?

Indicators or oscillators are used to find divergences. Most cryptocurrency exchanges and pricing websites support adding indicators into the price chart for viewers to analyze price movements.

One of the most reliable indicators is the RSI. In short, the RSI compares the average gain and the average loss over a certain time frame. This indicator is commonly used to identify overbought and oversold conditions in the market.

The next popular indicator is the MACD, which basically shows the relationship between two moving averages of an asset’s price. The divergence signals produced by the MACD usually resemble those produced by the RSI.

The figure below shows an example of a bullish hidden divergence identified using the MACD and RSI. From the figure, the price chart shows consecutive higher lows while the MACD and the RSI show successive lower lows. 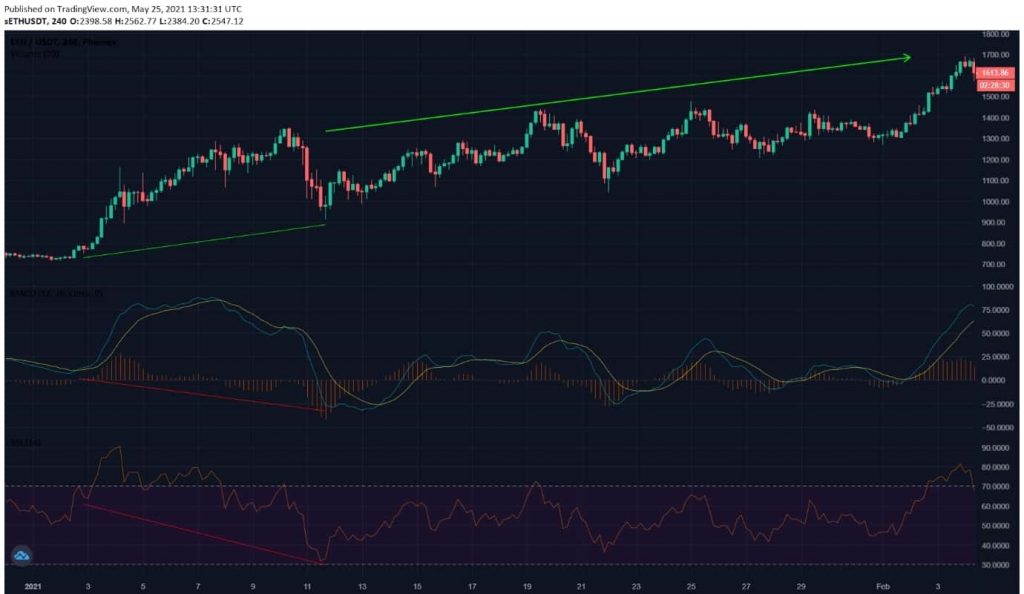 Bullish hidden divergence identified from an Ethereum price chart from January 1, 2021 to February 3, 2021, 4h time frame with the MACD and the RSI (Source: Phemex, TradingView)

Use the stochastic oscillator to identify hidden divergence How to Trade Hidden Divergence

Before trading hidden divergence, here are some rules to follow:

For a hidden divergence to exist, the price trend must have formed one of the following:

One of these four scenarios must occur in the price action before it makes sense to check the indicator signal.  The first two scenarios are self-explanatory and were shown previously in the bearish and bullish hidden divergence. The double top and double bottom are patterns that form due to movements in the value of an asset. In short, a double top pattern forms the letter “M” while a double bottom forms the letter “W.” The peaks and troughs of the price chart do not necessarily need to reach the same points for the double top and double bottom pattern to appear. 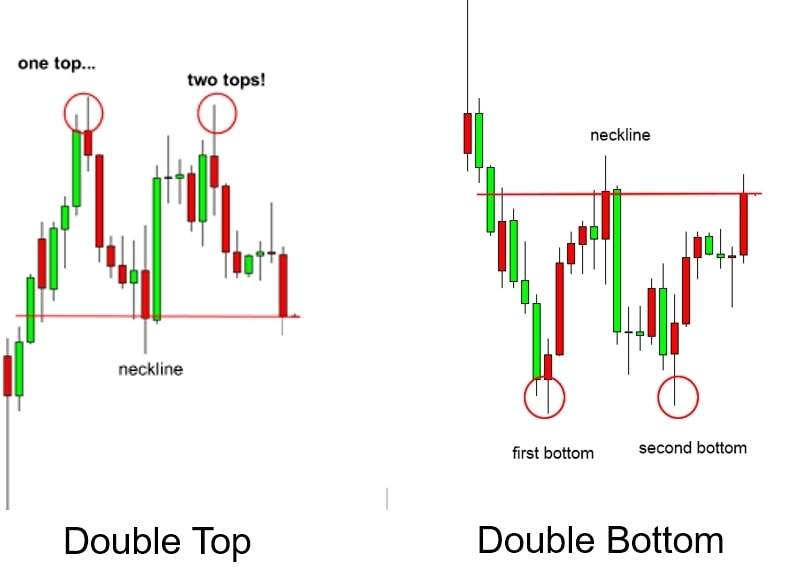 Rule 2: Only Connect the Lows for Bullish Hidden Divergence 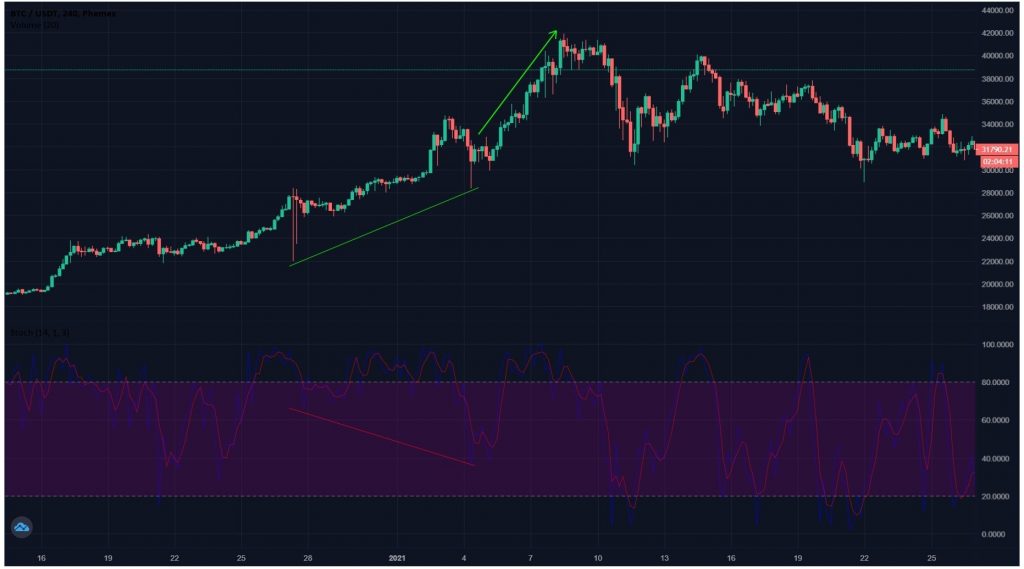 Rule 3: Only Connect the Highs for Bearish Hidden Divergence 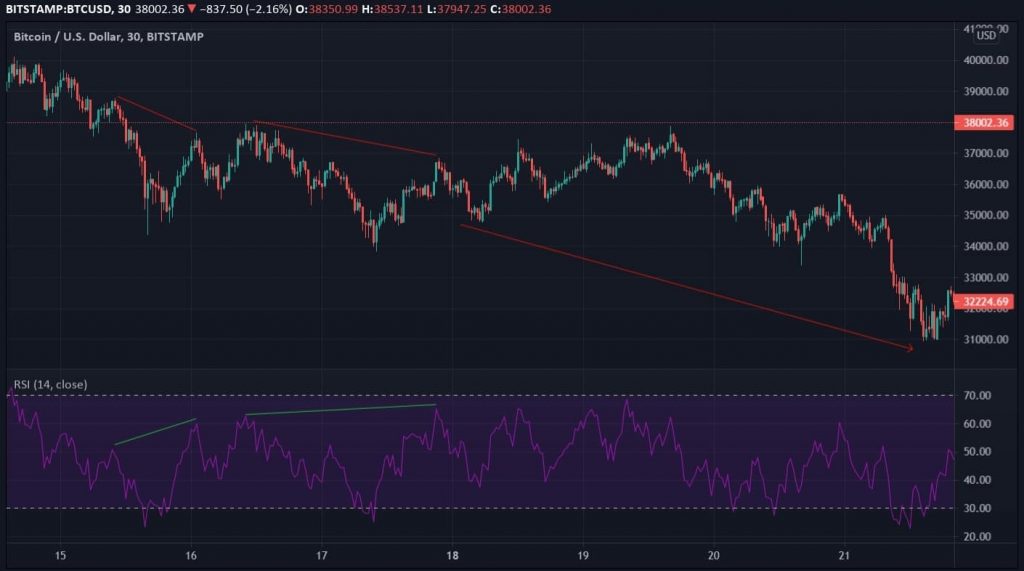 For bearish hidden divergence, vertically line up the lower lows on the price chart with the connected higher highs on the indicator. (Source: TradingView)

Rule 4: The Gradient of the Line Hints at the Strength of the Divergence

As mentioned in Rule 1, divergence can exist only if there is an ascending slope or descending slope on the price trend or on the indicator. The steeper the slope, the higher the likelihood of a price reversal or chance to earn profits.

Rule 5: Don’t Double Down on Divergence

Trends do not last forever, and it’s smart to trade divergence as soon as it’s spotted. If a divergence was spotted, but the price has already reversed and is a good distance away from its recent swing high/low, then have patience. It’s best to wait for the next divergence.

How Reliable Is Hidden Divergence?

Although divergence is a powerful sign indicating a change in the direction of a market’s movement, it cannot be used in isolation. New traders should focus on regular divergence before incorporating hidden divergence into their trading practices.

Remember that divergence does not always result in a strong reversal. According to one analyst, divergence indicators sometimes are meaningless and cannot predict major price action changes.

Instead, the price may have just entered sideways consolidation after a divergence. A sideways trend or consolidation refers to the horizontal price movement where the price of an asset trades within a stable range. For that reason, it’s useful to combine trading strategies because the use of only one indicator cannot capture the whole market context. By using two or three indicators simultaneously, traders may form a more robust strategy to better define a trend and choose more appropriate reactions.

Sometimes, when using two or more different indicators, the indicator signals may differ from one another and imply different market conditions. In such cases, it’s best to take a step back and examine whether the conflicting signals are obvious and strong. If they are, it’s a good idea to stay away from the asset for the time being.

Tips on using the Hidden Divergence

Can a regular divergence and a hidden divergence occur at the same time?

Divergence is one of the many trading strategies that professional traders use to make money. Beyond the indicators mentioned above, many others can be used to trade divergence. Like all trading strategies, divergence indicators also have a certain degree of risk, whether you use the RSI, MACD, or stochastic oscillator. The most important thing is to identify which indicators to use, understand them, and then practice with them before utilizing them in trades.

Remember that divergence does not ensure profits. It is merely an indicator that warns that there may be a change in the direction of the current price trend. Traders are advised to keep in mind the market context before trading regular or hidden divergence.