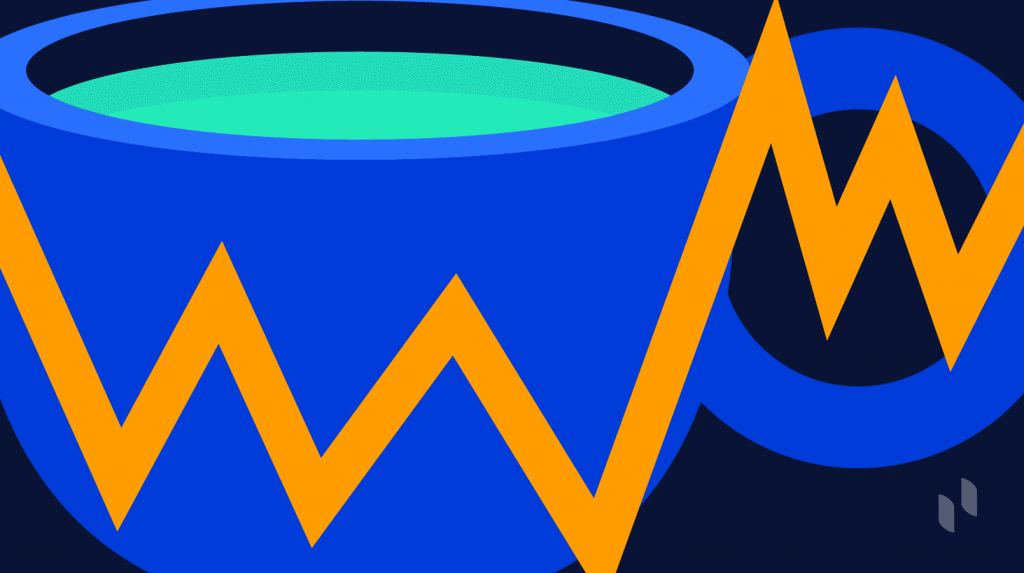 What is the Cup and Handle Pattern?

Developed by William O Neil and first discussed in his book, How to Make Money in Stocks, the cup and handle pattern is where the price initially declines, then levels off and begins to rise again, thus resembling a cup with a handle. The cup is in the shape of a “U” and the handle can be sideways or even have a slight downward drift that occurs near the “lip” of the cup.

Is Cup and Handle Bullish?

This pattern is often considered a bullish signal, with the handle usually experiencing lower trading volume. However, there is also the other side of this pattern, the reverse cup and handle, which represents a bearish trade. The above is another example of a cup and handle pattern, but in the reversal pattern, which was formed in the ETH/USD daily chart. Taking a closer look at the chart, you can see shaping up an ascending triangle breakout, and the digital asset went post-breakout.

How to Use the Cup and Handle Pattern?

When this pattern comes about a handle is formed on a cup, and most often it is in the shape of a triangle. The ideal position to buy is when the price breaks above the top of the shape taken by the handle. As soon as the price moves out of the handle, the pattern is complete and the underlying asset/stock may rise. However, it can decline as well, which is why a stop-loss is needed.

Set a Stop-loss with The Cup and Handle Pattern

A stop-loss order saves traders if the price drops, even after a stock forms the cup and handle chart. The stop-loss will sell off the stocks as soon as the price goes down to a specific price set on the handle.

An ideal trade would be to ensure a handle occurs within the upper half of the cup. An intelligent trader would place a stop-loss order in a way that it doesn’t end up in the lower half of the cup formation. For instance, let’s say a cup forms between $100 and $98. The stop-loss order should be set above $99, since that is the halfway point of the cup. When a stop-loss is below the halfway point, it is better to reject such trades. In order to make the most of stop-loss orders, it is ideal to set them in the upper third of the cup pattern, which allows traders to stay close to the entry point and helps improve the trade’s risk-reward ratio.

Set an Exit Strategy with The Cup and Handle Pattern

Tradeoffs of Cup and Handle Pattern

Technical indicators work better when used in conjunction with other signals and patterns. In particular cup and handle patterns, various limitations have come up over the years that have been discovered by traders and investors. First, this pattern can take some time to take full shape. Secondly, practitioners have found issues with the depth of the cup. While a shallower cup can represent a bullish signal, a deeper cup can produce a bearish signal. It can be confusing to pick up a particular cup and invest on its basis as this can lead to wrong decisions. Lastly, it has been identified that at times cup and handle patterns can be unreliable in illiquid stocks.

Making investments based on chart patterns is a norm nowadays as they help traders better understand technical analysis. The cup and handle indicator has long been used by traders to determine the direction in which an asset/stock may move. Additionally, it clearly defines the entry point, stop-loss, and target placement guidelines. However, it is advised to use this pattern along with other tools to make the most out of the opportunities available on the market.

← 13 Most Common Crypto Scams and How Can You Avoid Them？
What is WAX (WAXP): Creating the Biggest P2P Market →
About