What Is aETHc? – Affordable Staking on Ethereum 2.0

Ethereum 2.0 is an eagerly-awaited upgrade to the world’s largest smart contract blockchain platform. Ethereum plans to move completely from its current main Proof of Work (PoW)-based network to the much more efficient Proof of Stake (PoS) version some time in 2022.

In the meantime, the PoS-based version already runs alongside the main network. The PoS block validation model has opened up opportunities for staking on Ethereum. However, the technical and financial requirements to run a validator node on the new platform are burdensome for many crypto users.

A number of blockchain projects that make Ethereum 2.0 staking more affordable have surfaced in recent times. One of the most notable among these is Ankr, a Web 3.0 blockchain solutions developer. Ankr offers flexible and affordable staking on Ethereum 2.0, with the aETHc (formerly aETH) cryptocurrency underpinning this service. 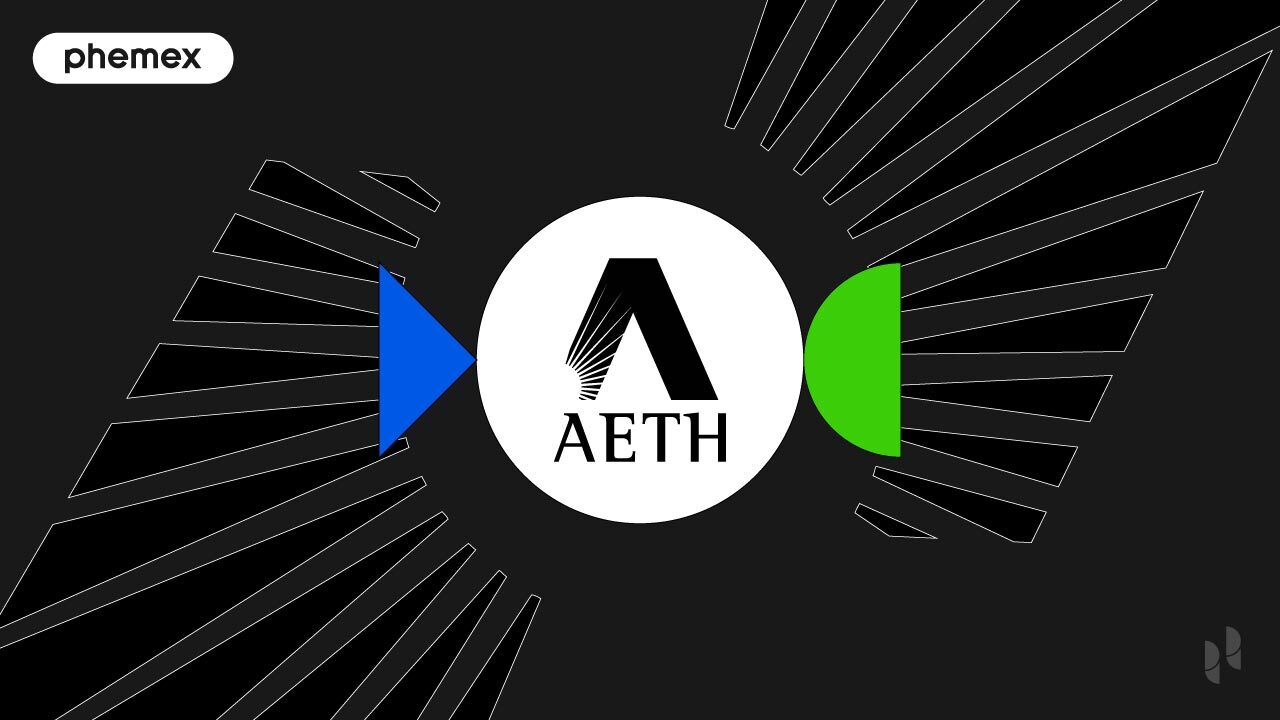 What Is the aETHc Crypto?

One of the leading Ethereum 2.0 staking solutions on the market is provided by Ankr, a protocol and blockchain development project specializing in Web 3.0 solutions. Ankr’s staking solution, StakeFi, allows you to participate in Ethereum liquidity staking without owning the requisite hardware and software, and on a much more affordable basis compared to running a validator node.

You will need a deposit in ETH to start using StakeFi. The protocol stakes these on Ethereum 2.0 on your behalf. Your ETH investment is converted to aETHc at the rate of 1:1. Thus, aETHc is used to represent your stake on the platform. Accrued staking rewards are added to these funds.

Using StakeFi, you can earn staking rewards by investing as little as 0.5 ETH. In contrast, staking directly on Ethereum requires locking at least 32 ETH on the platform.

Direct staking also requires a complicated technical setup. For example, to stake directly on Ethereum, you will need to download the entire blockchain databases for the current and new PoS versions, which are over one terabyte in size. StakeFi frees you from these technical complexities as well.

aETHc was previously known as aETH. In June, Ankr renamed the coin to its current symbol. On some websites, it is also referred to as ankrETH.

While your initial staking investment is converted from ETH to aETHc at parity, each aETHc you hold on the platform is normally worth more than one ETH, as the staking rewards are added on a per coin basis. In other words, the rewards are not distributed as additional aETHc coins on top of your base investment but rather delivered as increases in the per-unit value of each aETHc staked.

Your aETHc coins keep accumulating value over time as rewards accrue. When Ethereum’s upgrade moves to stage 1.5, which is expected some time in 2022, you can unstake your investment and swap aETHc, along with all accumulated rewards, to ETH.

To start using the platform, besides the minimum 0.5 ETH investment, you will need to open an account and link one of the six supported wallets – WalletConnect, BSC wallet, imToken, Math Wallet, or Trust Wallet, .

Once you deposit your initial investment, you may also take advantage of StakeFi’s staking manager app. This is an automated investment management algorithm that allocates your investment into various Ethereum staking pools to optimize yield.

Currently, the expected annual percentage rate (APR) from staking is around 5% to 7%. However, staking yields may change over time as they are closely linked to the overall activity on the Ethereum blockchain. Ankr charges a 15% commission fee on the accrued rewards.

aETHc is not the only coin used on StakeFi. The second coin, aETHb (formerly fETH), is also used to earn rewards from Ethereum staking. While both coins have the same overall concept, they differ slightly in the reward accrual mechanism.

aETHc is a synthetic asset whose unit value grows as rewards accrue. You will need to keep your investment until stage 1.5 of the Ethereum upgrade.

On the other hand, aETHb has a fixed 1:1 peg to ETH, and rewards are added to your principal on a daily basis. aETHb is more suitable for short-term staking, while aETHc is a good solution for long-term stakers.

aETHc staking is also available for a larger variety of pools. Ankr currently promotes aETHc staking much more actively than its aETHb-based product. The more active coverage and promotion of aETHc suggests that the company sees this coin as its future core offering. 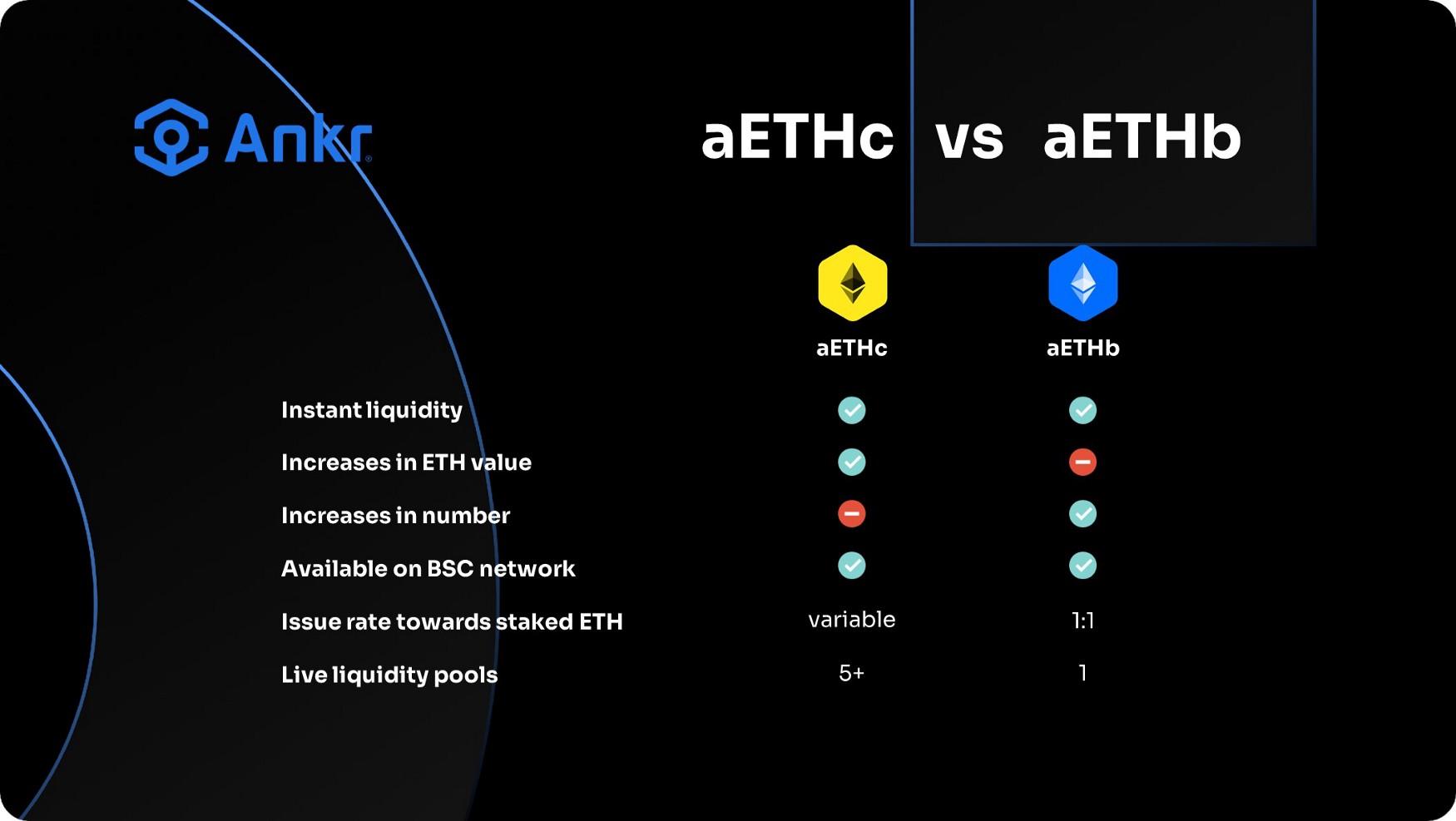 Who Is Behind Ankr?

Ankr, the creator of StakeFi and the aETHc coin, was founded in 2017 in San Francisco by two entrepreneurs, Chandler Song and Ryan Fang. Song has a technical background and worked as an engineer at Amazon prior to co-founding Ankr. Fang brings investment banking expertise to the project, having worked at Morgan Stanley before teaming up with Song.

Ankr has raised a total of $27.3 million in venture capital (VC) over four funding rounds. The first of these rounds was the project’s initial coin offering (ICO) in November 2017, and included a relatively modest $200,000.

In addition to attracting VC, Ankr has also invested in three blockchain projects – DeFi Land, EthSign, and Covalent. All three investments were made this year.

Due to its functionality mechanism, aETHc’s rate has closely tracked that of ETH. However, aETHc is not a stablecoin strictly pegged to ETH. As such, its rate, while closely linked to ETH, fell as low as 0.82 ETH in January 2021 and rose to a peak of 1.025 ETH in early October 2021.

The graph below shows the rate of aETHc to ETH from mid-December 2020, when the coin was first listed on CoinGecko, to the time of writing on December 7, 2021. While “dancing” around the one ETH level is easily observed, one may note that aETHc has mostly stayed slightly below parity with ETH. The key reason why aETHc is usually worth a bit more than one ETH is the accrual of rewards on StakeFi. As rewards are added to aETHc on a per-unit basis, each aETHc coin becomes more valuable than one ETH.

In general, the coin’s close link to ETH ensures that its future rate movements are likely to closely follow ETH’s dynamics. If ETH continues to increase in value, the future rate of aETHc, as measured in USD, will also likely increase. The close association between aETHc and ETH may only be compromised if the StakeFi platform underperforms in the broader context. aETHc is a crypto coin used for Ethereum 2.0 staking on the StakeFi protocol provided by Ankr. The coin represents a synthetic asset that appreciates in value as staking rewards are accrued to it.

aETHc was previously known as aETH before Ankr renamed it in June 2021. The aETHc coins are redeemable for ETH when Ethereum completes its stage 1.5 upgrade. This is the stage when the Ethereum network makes the current PoW platform a shard on the new PoS-based blockchain.

Staking with aETHc is an affordable and less technically-involved way of earning rewards on Ethereum 2.0. While direct staking on Ethereum 2.0 requires a minimum commitment of 32 ETH, StakeFi allows you to stake with as little as 0.5 ETH.

Additionally, staking with aETHc on StakeFi does not require the complex technical setup typically used for direct Ethereum staking.

aETHc is closely linked to the ETH rate due to its functionality mechanism. However, the coin’s rate has remained very slightly under one ETH for most of the time on the market. This is due to each aETHc carrying the value of both the principal investment and the accrued rewards.

As Ethererum 2.0 develops, it is expected that aETHc will be an in-demand coin due to the staking opportunities it creates.