Inflation vs Deflation: What Are They and How Do They Differ?

Within cryptocurrency, there are ingrained elements designed to protect from fiat-economy mass deflation and inflation. This can be seen by cases such as Bitcoin (BTC), where a built-in cap controls how many coins can be created (max 21 million BTC). However, coins with a limited supply, like BTC, are nevertheless classed as deflationary assets, while coins with a non-fixed supply, like Ethereum are classed as inflationary assets. In order to have a good grasp of deflation vs inflation, it’s crucial to understand what both of these are. 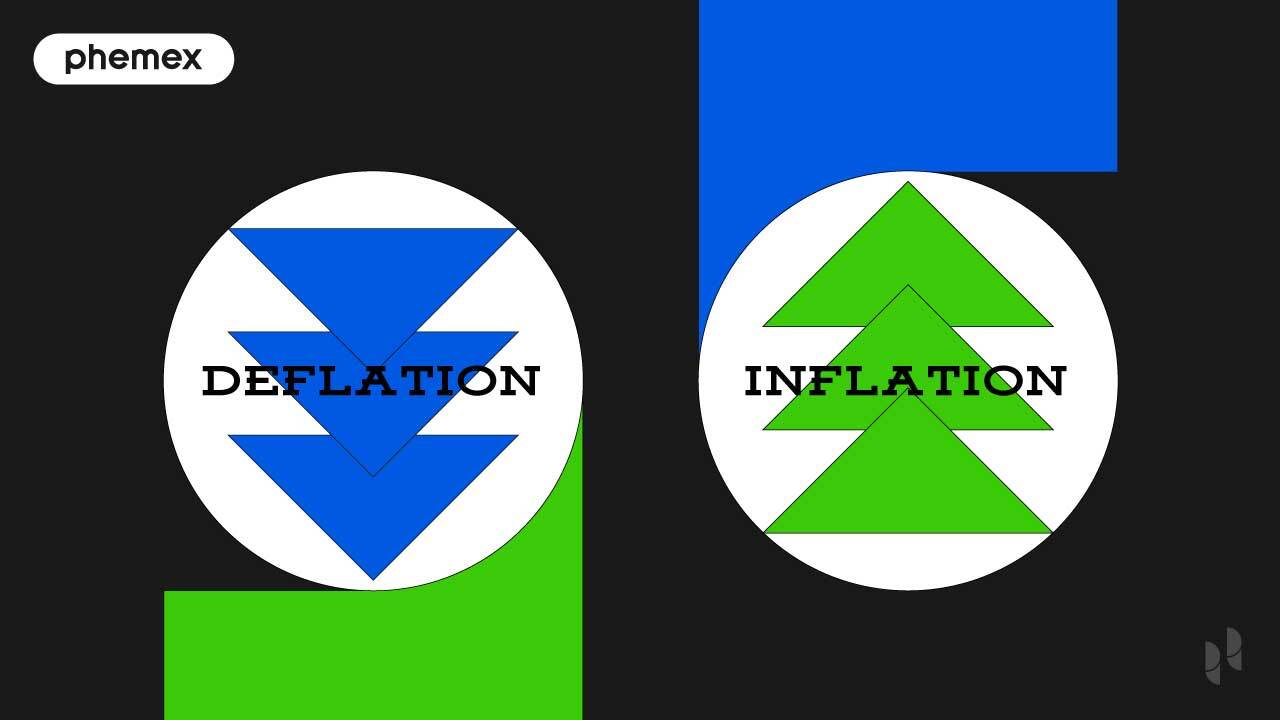 What Is Inflation and Deflation?

What Is Deflation In The Economy?

In essence, deflation is a reduction in prices for goods and services, leading to growth in purchasing power within the economy. Although this sounds positive, deflation has been a cause of worry for economists for a long time. Looking at it superficially, it seems to be beneficial for consumers as they’re able to purchase more, or make more costly purchases while earning the same. However, deflation is not universally beneficial.

The result of falling prices can have a negative impact on more than one economic sector. A strong example is the financial sector, where deflation means borrowers must pay back more money than they originally borrowed. Deflation can also have a harmful effect on anyone engaged in speculative financial market activity around rising prices an.

What Are The Causes of Economic Deflation?

One of the most important and common causes of economic deflation is a decrease in money supply. Today, money supply is overwhelmingly influenced by central banks, like the Federal Reserve in the United States. A decrease in the levels of money supply as well as credit, in the absence of a corresponding decrease in economic output, results in a fall in the prices of goods. Moreover, deflation usually takes place after extended periods of monetary expansion from an artificial source.

A modern example of such an event can be seen in the United States’ Great Depression of 1930. This economic deflation was chiefly caused by a drastic decrease in the money supply caused by the financial crisis in banking. This decrease brought about severe banking failures due, but not limited to, factors such as unpaid debt and mass withdrawals of money thanks to general panic. All of this then contributed to lowered liquidity and the ensuing bankruptcy and closure of many banking institutions. The graph below outlines this historical phenomenon. 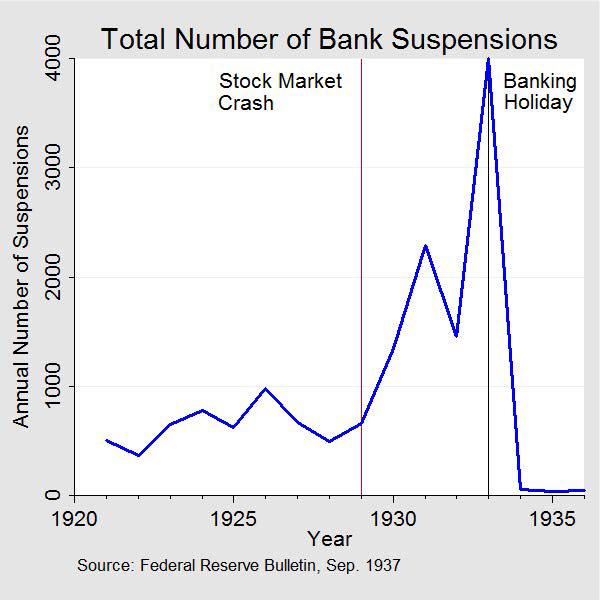 Deflation and declining prices can also have other root causes, such as a fall in the population’s total demand for goods and services, added to an increased productivity that does not match up to said demand. This typically causes a fall in prices. This sort of economic shift tends to take place due to reduced government spending, a negative downturn in stock markets, the population’s desire to increase savings, and hikes in interest rates.

Decreasing prices can also take place naturally in the event that the economic output has a higher growth pace than a given circulating money and credit supply.

Moreover, operational innovation and increased efficiency bring about lower costs of production, which means cost savings that go on to cause lower prices. This scenario differs from, but is similar to, the general deflation of prices — which as we have seen before means prices decreasing and an ensuing increase in consumer purchasing power.

Lastly, the appeal of debt financing goes down as the result of deflation for entities such as governments, businesses, and private consumers, as there’s a decrease in money supply. On the other hand, deflation leads to an increase in the economic force of equity financing that is savings-based. When looking at deflation versus inflation, we would see the opposite economic trends taking place.

What Is Inflation In The Economy?

In essence, inflation is the decline of purchasing power of any currency spread out over time. A practical example of this is the price of a pound of flour: 50 years ago, it may have cost $0.20, but now the going price is much higher, at $1.50 per pound. This increase over more than half a century is caused by economic inflation. Hence, we can see that a quantitative estimate of inflation can be seen by looking at the average price of an assortment of goods and services over a set time-period. The general climb of prices measured over a given time period can give an indication that the currency unit being looked at has less purchasing power than it did at the start of the period being measured.

When a currency experiences value-loss, it causes prices to rise and a decline in purchasing power. Said loss of purchasing power affects the cost of living as a whole for the population. Over a period of time, this phenomenon leads to a deceleration in economic growth. It’s important to point out, however, that inflation, like deflation, does not necessarily take place at the same time worldwide — although due to the interconnectivity of world economies, inflation and deflation in a given national economy can affect other economies. Moreover, when looking at inflation versus deflation, deflation causes the opposite phenomenon, where prices go down resulting in a rise of purchasing power.

One of the most common precursors to, and causes of, an inflationary economy is an increase in the money supply. This takes place most commonly by loaning new money into existence in the form of reserve account credits, which then move through the banking system thanks to the buying of government bonds. These are purchased from banks. The ways in which this affects inflation may be divided into three methods:

What Are The Main Causes of Inflation?

There are several factors that can cause inflation:

What Is The Difference Between Inflation and Deflation?

The difference between deflation and inflation is simply that they act in opposite directions on the purchasing power of currency. A small amount of inflation in an economy is positive, as it means there’s an inherent demand for goods and services, which is a healthy indicator for an economy. If a small amount of inflation is not present, deflation can easily take place, bringing with it lower prices — something which may sound positive on a micro level, but which can also lead to businesses laying off employees or going into total bankruptcy, for example. This sort of movement creates a negative feedback loop in the economy.

How Do Inflation and Deflation Affect Cryptocurrencies?

Cryptocurrencies have a different relationship to inflation and deflation from fiat currencies, as they are not yet as entangled in the global economy and are built differently. However, crypto coin prices can be affected by fiat deflation and inflation, in accordance with the purchasing power of the public.

In order to understand how inflation and deflation can affect a cryptocurrency, and how it works in cryptocurrencies, we will take the example of Bitcoin (BTC). First, it should be noted that BTC is a deflationary currency because it has a fixed supply. Additionally, it has a pre-programmed inflation in the form of halving, which induces inflation through reducing Bitcoin supply, thereby driving demand up. Halving is when the Bitcoin mining reward is halved, which also halves the inflation rate of Bitcoin, as well as the rate at which newly mined Bitcoin begins to circulate.

During inflation, there’s an increase in money supply. Hence, when the world-wide economy has more money in it, and BTC has a fixed number, the fiat currency cost of Bitcoin will rise. The value of the Federal Reserve’s assets is an indication of how much money they’re allowing to be printed. Its size has grown since 2007 from $1 trillion to over $8 trillion in 2021 as per the federal reserve website. Thus, it naturally follows that Bitcoin’s price has been on a general upward trend.

In the event of a deflationary economy, the price of Bitcoin tends to fall. An example of this happening is the COVID-19 pandemic. The below chart shows the price of Bitcoin during the course of the pandemic. The deflation that took place during this time was due to people in lockdown spending less, while businesses maintained the same overhead costs and inventory. Bitcoin’s price collapsed in parallel. This was because some people may have needed to cash out their Bitcoin, while others would have seen this collapse as natural, as the pandemic was incessantly dragging down prices. If the supply of fiat money is on the decline, then the Bitcoin price will likely follow. 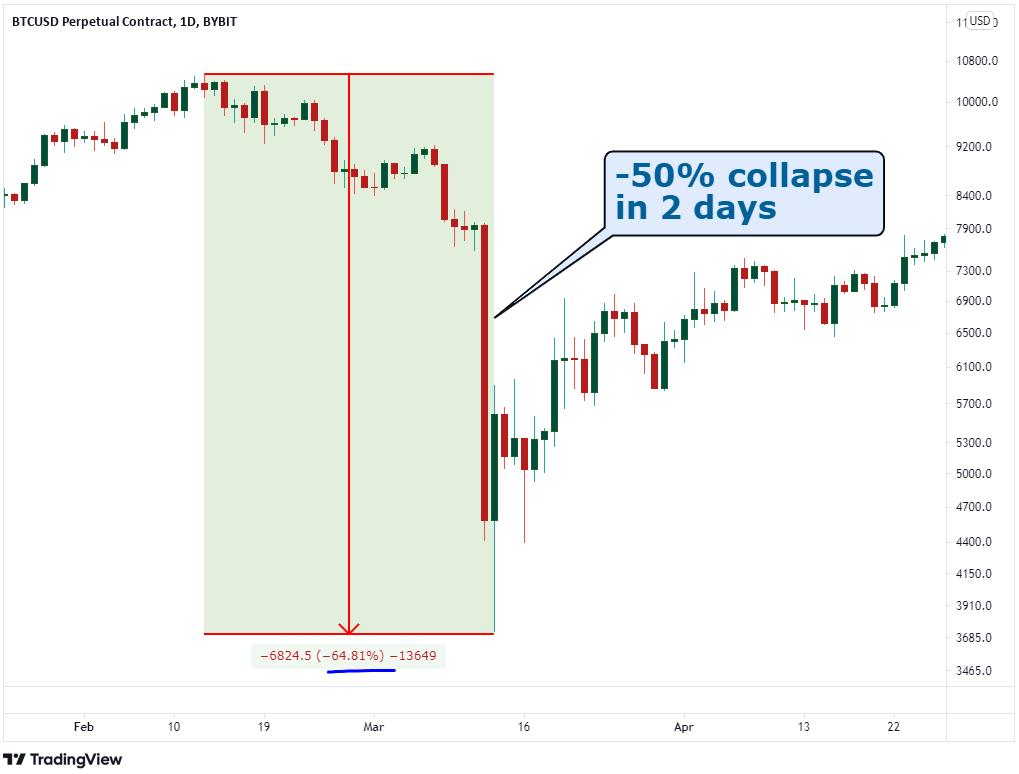 Graph showing the steep dive in BTC prices during the pandemic. (Source: tradingview.com)

The crucial fact to keep in mind is that Bitcoin follows money creation as a norm. Inflationary and deflationary trends affecting Bitcoin do not correspond in a direct manner, and should be regarded in general terms, because Bitcoin demand also has some price impact.

Throughout this analysis, we have seen that deflation and inflation can have both positive and negative repercussions for both fiat and cryptocurrencies. Deflation is considered bad for the fiat economy in general, while a little inflation is considered healthy. On the other hand, cryptocurrencies are not as affected by inflation and deflation, as they have different methods of currency creation and usage, and some, like Bitcoin, have built-in protective measures against them, such as periodically halving.