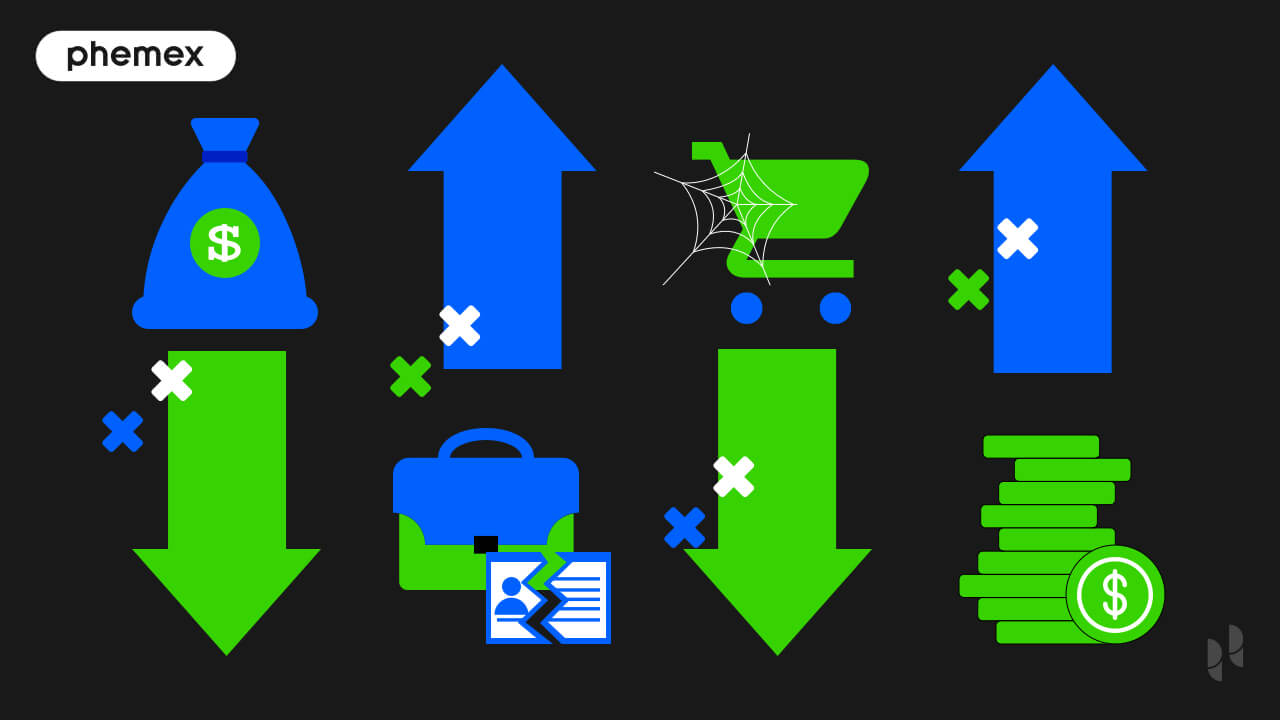 Stagflation–a combination of the terms “stagnation” and “inflation” describes an economy where rising inflation is combined with an economic downturn and an increase in unemployment, which happened in the US during the 1970s.

The term was coined to describe a rare, even unnatural phenomenon because economists were previously of the opinion that high inflation and unemployment could not co-exist–if unemployment increased, prices should typically decline or at least grow more slowly because with more unemployed people, there should be less spending power going around.

But during the 1970s, the US and other leading economies experienced high inflation marked by soaring prices and wages, while economic output i.e. productivity decreased and unemployment spiked. During this period, inflation climbed from about 1% in the mid-1960s to more than 14% in 1980.

Stagflation is especially bad because even though demand for goods and services is already low due to the lack of consumer spending, prices of goods and services remain high–creating a double strain on the economy. In addition to causing economic stress for businesses and consumers, stagflation also affects countries on a governmental level.

A wide range of factors can cause stagflation, including excessive money supply, government regulation and price controls. Several elements at play resulted in the 70s stagflation, including one of the significant events of that time—the Vietnam War. When the war ended, the economic consequences reverberated across the globe.

The fourfold increase of oil prices during the 1970s further compounded the problem. Ultimately, the US Federal Reserve (under chairman Paul Volcker) bit the bullet and  raised interest rates above 19% to get inflation down. Still, it took a decade for things to pick up again.

Let’s now briefly go over the three most important characteristics of stagflation and the role of the Federal Reserve in the economy.

Slow economic growth is when economic activity slows down or stops growing. This is often seen in countries that have experienced a recession or a major slump. Slow growth can be a sign of a weak economy, but it can also result from several factors. For example, slow growth can indicate that people cannot pay their bills or even for basic necessities like rent or food. What’s more, during a sluggish economy, it’s hard for businesses to grow.

The effects of inflation on the economy are numerous. The most obvious one is that money loses its value as more of it is required to purchase the same amount of goods and services.

When prices keep rising, people’s savings get eroded as well, and they might even have to sell their homes or cars to have enough money to survive. This can lead to massive declines in housing prices and even entire communities being abandoned.

Inflation also creates a situation in which debt becomes more expensive—people pay more monthly to finance their debts. The result is that many end up in a bad financial situation or go bankrupt, and as a result, are unable to spend and contribute to the economy.

There are many reasons why unemployment might rise. For example, a recession could cause businesses to cut back on hiring. Rising unemployment can also be caused by a change in government policy. For example, there could be changes to the minimum wage or a reduction in benefits.

The US Federal Reserve

The USA’s central bank—the Federal Reserve—is responsible for controlling inflation by managing the amount of money in the economy. It does this by setting the interest rates that banks can charge for loans, buying and selling bonds and making other investments, and buying or selling short-term government debt. By controlling interest rates, the Federal Reserve also affects economic growth through its influence on the money supply, and by extension, borrowing costs.

Inflation is an ever-present feature of an economy, whereas stagflation is an anomaly.  Inflation refers to an increase in prices of goods and services in an economy over time. An average of 2% inflation per annum is considered to be acceptable and indicative of a healthy economy, according to the mainstream economic school of thought.

Stagflation, on the other hand, is a period where the economy is, to put it bluntly, in a bad shape. It is marked by high inflation, high unemployment, and a shrinking economy as denoted by a decrease in GDP. Investor sentiment is typically negative, as higher prices (caused by inflation) combined with lower demand (due to high employment) generally result in lower stock earnings for corporations.

How to invest in a stagflation?

When stagflation occurs, investors usually see a decline in the home currency relative to other currencies. Investors may also see declines in stock prices as market participants try to protect themselves against inflation by shifting money into more stagflation-resistant assets.

When stagflation is on the horizon, it is important to diversify your investments. You must be careful when investing in mutual funds, index funds, or ETFs and select investment vehicles positioned to handle stagflationary periods.

In stagflationary environments–which involves high inflation–it is generally safer to reduce one’s bonds and stocks holdings. When people have less money to spend, and businesses produce less, their value also decreases. This is why the stock market is not the best place during stagflation.

Instead, smart investors usually choose to invest in commodities (such as oil, gas and copper), because if inflation is high, commodity prices will also increase. This is not to say there will not be risks or volatility in this asset class.

Real estate is another viable investment option in a stagflationary economy, especially when it is bought on a fixed-rate mortgage. This is because prices usually increase with inflation, while the mortgage payment is relatively lower (since it was pegged to a lower, fixed interested rate.)

Is crypto investing good in a stagflation?

Increasingly, investors are looking to crypto as an alternative asset class money against inflation and, if it comes to it—stagflation. In the early when the prices of fiat currencies devalue due to inflation, cryptocurrencies, Bitcoin in particular, become one of the few solutions to protect purchasing power.

Bitcoin, with its fixed supply of 21 million, is considered to be a deflationary asset. In theory, this makes it a good inflation hedge–but with Bitcoin increasingly getting treated the same as high-risk stocks/equities especially in the past two years, this theory is being put to test as the world enters 2022 with uncommonly high inflation almost everywhere around the world.

At the time of writing, Bitcoin continues to trend downwards in price, having lost about 70% of its peak value since November 2021. Hardcore Bitcoiners are continuing to “stack the sats,” however, as they believe its price will in time cross $100,000 and to buy it now is to get in at a good discount.

In any case, this is the first time Bitcoin is experiencing its first full-blown recession as a significant asset class (it was introduced to the world in 2008 during the Global Financial Crisis but nobody took it seriously as an asset then.) It will be interesting to see how Bitcoin, and by extension, altcoins such as Ethereum, perform during this period of turbulence and uncertainty.