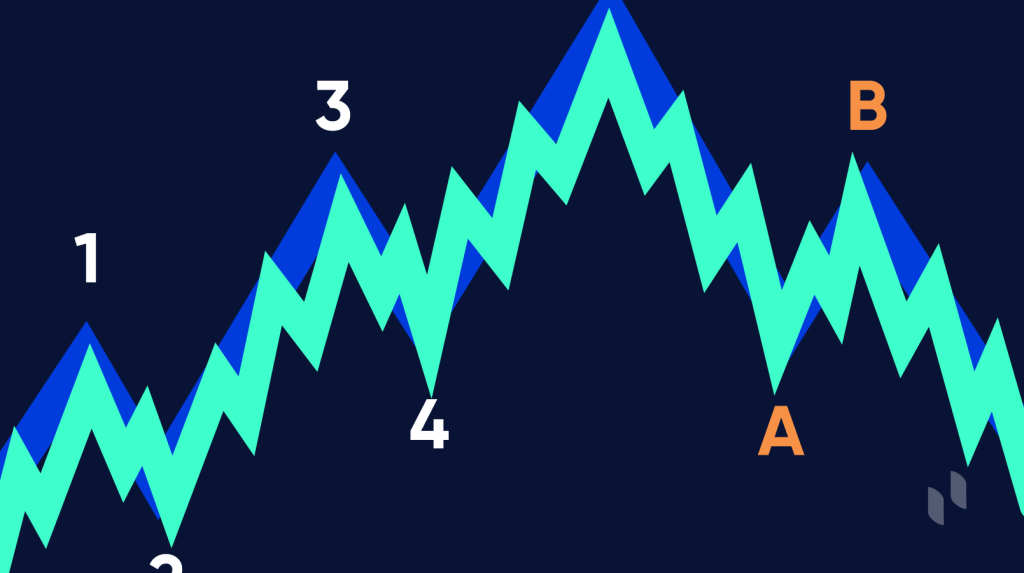 When trading in any financial market, having a broad overview of the current trends and market events is quite advantageous. Technical analysts are continually applying new theories based on candlestick charts’ patterns to help them predict where an asset’s price is headed.

What is The Elliott Wave Theory?

Based on the Elliott Wave principle, one such theory gained prominence in 1935 after its uncanny prediction of the stock market touching a new all-time low. The Elliott Wave principle is used to analyze financial market cycles using market investors’ psychology, also known as ‘collective psychology’ or ‘crowd psychology.’ It is notably one of the most complex technical analysis tools out there.

American accountant Ralph Nelson Elliott proposed the Elliott Wave Theory in the 1930s. Due to a health ailment, Elliott was forced to retire early, leading him to study and analyze 75 years of charts and patterns across various stock market indices to pass his free time. He discovered that price action, rather than behaving randomly, followed an intrinsic pattern.

He also observed that the same patterns were repeatedly produced, enabling him to predict the market bottom in 1935 correctly. The Elliott Wave Theory has since become one of the most renowned technical analysis tools in the industry and is used by portfolio managers, traders, and private investors worldwide.

In his book titled The Wave Principle, and in a series of articles that followed, Elliott described specific rules governing these wave patterns and how to identify them. He proposed that even though markets behave randomly and chaotically, market prices evolve in specific repetitive patterns.

How does The Elliott Wave Theory Work?

He called such patterns Elliott waves, or simply, waves. According to the theory, the wave patterns develop either in straight lines or with ups and downs. The price fluctuates between impulsive and alternative phases, forming the same cycles repeatedly across all financial markets, including cryptocurrency trading. The observed waves are identical, recurring, and are subdivided into five-wave sets that alternate between motive and corrective waves.

What is An Impulse Elliott Wave?

A wave that travels in the same direction as the prominent trend is called an impulse wave. There are always five such waves in a pattern. The corrective wave travels opposite the primary trend’s direction. Each wave has a nested, more extensive set of waves that also follow the same impulsive and corrective fractal wave patterns.

Each wave in the Elliott wave chart has its own characteristics, typically reflecting the psychology behind the movement. Markets swing from optimism to pessimism in natural sequences, and Elliott believed that asset price fluctuations resulted from investors’ predominant psychology.

The Elliott Wave Theory is not unlike the Dow theory, which also recognizes that market prices fluctuate in waves. However, Elliott also pointed out the fractal nature of markets, which allowed him to analyze them in much greater detail.

In the field of mathematics, fractals are structures that infinitely repeat themselves over an ever-decreasing scale. Elliott noticed similar structures during his study of stock price indices, pushing him to figure out how to use these patterns to predict market movements.

Elliott structured the theory using nine degrees of waves from the largest Grand Super Cycles to the smallest Sub-Minuette. Since the waves are fractals, there are theoretically degrees beyond the nine listed by Elliott.

In an Elliott wave chart, five waves are generally observed to move in the primary trend’s direction. These waves make up what is known as an impulse wave, while the subsequent three waves move against the trend to form the corrective wave. This underlying 5-3 pattern remains consistent at every degree, though the span of each can vary.

A wave that always advances in the direction of the trend is called a motive wave, traditionally defined as the 5-wave movement in the trend’s direction of one higher degree. However, some analysts believe motive waves don’t necessarily have to be in sets of five and that today motive waves can even unfold in three-wave sequences. The above chart shows how the first, third, and fifth waves follow an upward trend. These are impulse waves on a smaller scale, while waves 2 and 4 are correction waves of 1 and 3, respectively.

These alternating patterns are observed across various time frames. The completed five-wave sequence of a shorter time frame could represent the first wave of a more extensive chart unfolding on a longer time frame, as observed in the chart below.

Grasping the Elliot Wave Theory isn’t too troublesome, but applying the theory to financial markets to maximize trading profits is no cakewalk. Identifying and labeling the different waves can be tedious as they aren’t always shaped perfectly, and it takes practice and experience to detect them reliably.

As a rule, the second wave will never retrace beyond the starting point of the first wave. This essentially means that the price after the completion of wave 2 can never be lower than the price at which wave 1 started.

Further, wave 3 can never be the shortest amongst all three impulse waves. It is usually (but not necessarily) the longest in the whole sequence and always ends past the peak of wave 1. Wave 4 never overlaps the price territory of the first wave, meaning it cannot retrace wave 3 completely, except in the case of a diagonal triangle formation.

What is The Elliott Wave Cycle?

Based on the rules mentioned above, the following formations do not adhere to the Elliott Wave Theory, making them easy-to-recognize signals of the movement not being part of an Elliott Wave Cycle. However, these patterns don’t show us if an Elliot Wave Cycle is in effect. For those, analysts look to other indicators in the chart pattern. For example, when the third wave is the longest, waves 5 and 1 will be approximately equal. If Wave 5 doesn’t move beyond wave 3, truncation will occur.

Additionally, the third wave tends to be quite sharp, long, and extended. If wave 2 occurs in a sharp correction, wave 4 will be flat, and vice versa. It’s also important to note that the a-b-c correction after a 5-wave impulse usually ends before the fourth wave’s low.

How Accurate is The Elliott Wave Theory?

The Elliott Wave Theory gained most of its popularity in the 1970s after A.J. Frost and Robert Prechter published the now celebrated title: Elliott Wave Principle: Key to Market Behaviours. The book predicted the 1980s bull market, and Prechter even issued a sell recommendation just days before the 1987 crash.

Today, Elliott Wave International is one of the world’s biggest independent financial analysis firms, and many of its market forecasting tools are based on the Elliott Wave principle. Still, Elliott made sure to clarify that the observed patterns offer no certainty about potential market movements and that they were better used in combination with other technical analysis indicators to identify the best opportunities.

Over the years, analysts have developed a plethora of indicators inspired by the Elliott Wave principle, including the Elliott Wave Oscillator. This oscillator gives traders a computer-generated model that predicts potential price action based on the difference between two moving averages. The EWAVES artificial intelligence system, developed by Elliott Wave International, functions under all of the standard Elliot Wave Theory rules and automatically generates an analysis.

An analysis from 2019 predicted that the price of Bitcoin would touch $27,000 by the end of 2020. On December 31, 2020, BTC closed at nearly $29,000. These analyses aren’t just useful for day traders but also institutional investors and traders dabbling in derivatives markets. In an interview with CNBC, one trader predicted that Bitcoin could even touch $74,000 by the end of the year using the Elliott Wave Theory as the focus of his analysis.

How to use The Elliott Wave in Crypto Markets

As with most technical analysis tools, there are certain nuances to using the Elliott Wave Theory in cryptocurrency markets, especially with how erratic and volatile its price movements typically are. In most cases, the start of the first wave is the ideal point of entry. However, this can be hard to identify, especially after sudden market dips or long consolidation periods. Instead, it’s much easier to enter at the bottom of wave 2 or wave 4 and make sure to avoid the tops of waves 3 and 5.

About exit points, the end of the c wave is usually the ideal choice. Once again, this can be extremely tough to notice as the last waves in the cycle can usually retrace 100% of the initial 5-wave pattern. The general advice here is to wait for a consolidation period that breaks outside the trend line produced by the final corrective wave. 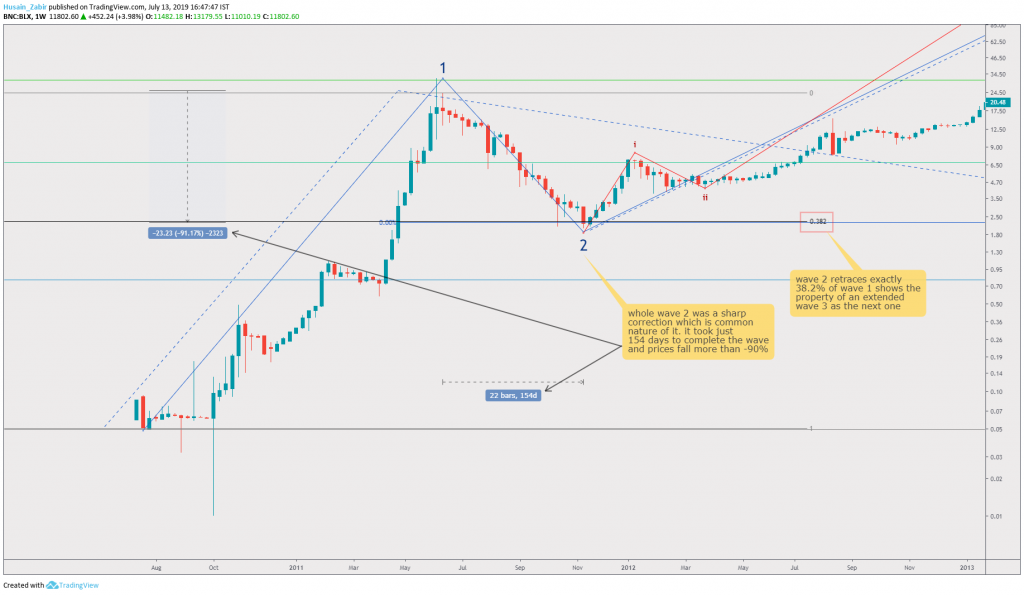 In the decade since Bitcoin’s inception, analysts have closely monitored its market performance looking for clues as to its future movements. According to reports, Bitcoin has been following the Elliott Wave Cycle pattern this entire time. Bitcoin’s price skyrocketed from $0 to $32 in less than a year from its launch, and early adopters reeled in hefty profits during the first significant sell-off in wave 2.

Since the second wave, Bitcoin has been closely adhering to the Elliott Wave principle, with wave 2 retracing by only 38.2% and wave three finishing nearly equal to wave 1. Wave 5 ended at around 70% of wave 3, cementing the rule of the third wave never being the shortest of the five.

Despite being one of the most useful instruments in the world of trading, providing investors an edge in predicting market sentiment, it’s vital to understand that the fractal structures observed during these movements don’t imply markets are entirely predictable.

The Elliott Wave principle is far more valuable as a tool to make a more informed buying decision based on where the price lies in the different cycle phases rather than predicting price action. Buying and selling assets in any financial market attracts risk, so make sure you do your own research before spending any money.

That said, the Elliott Wave Theory is a form of analysis that has stood the test of time. It mines deep into the subconscious collective psychology of market participants to extract predictable insights into an investment’s future, and this is a grossly undervalued perspective to have. Cryptocurrency markets are more driven by sentiment than any other financial market. Having a clear, probabilistic idea of how likely market shifts can be is like bringing a gun to a knife-fight.