In 1896, Charles H. Dow, founder of the Wall Street Journal, introduced the Dow Jones Industrial Average index, publishing a series of articles in the 20th century collectively referred to as ‘The Dow Theory.’ As a long-standing and integral component of technical analysis, Dow theory was used extensively even before candlestick charts had been introduced to the west.

He also believed that market movements could be predicted based on the price action of various kinds of stocks. According to Dow’s theory, an upward trend in industrial stocks is only confirmed when there is a similar upward movement in transportation stocks, and Dow created many market averages to define these two categories more accurately.

In the early years, Charles Dow and Edward Jones ran the company themselves, developing its integrity and reputation for quality financial news. After Dow died in 1902, the company was bought by Clarence Barron and Jessie Waldron, with control eventually passing down to the Bancroft family before being acquired by News Corp. in 2007. 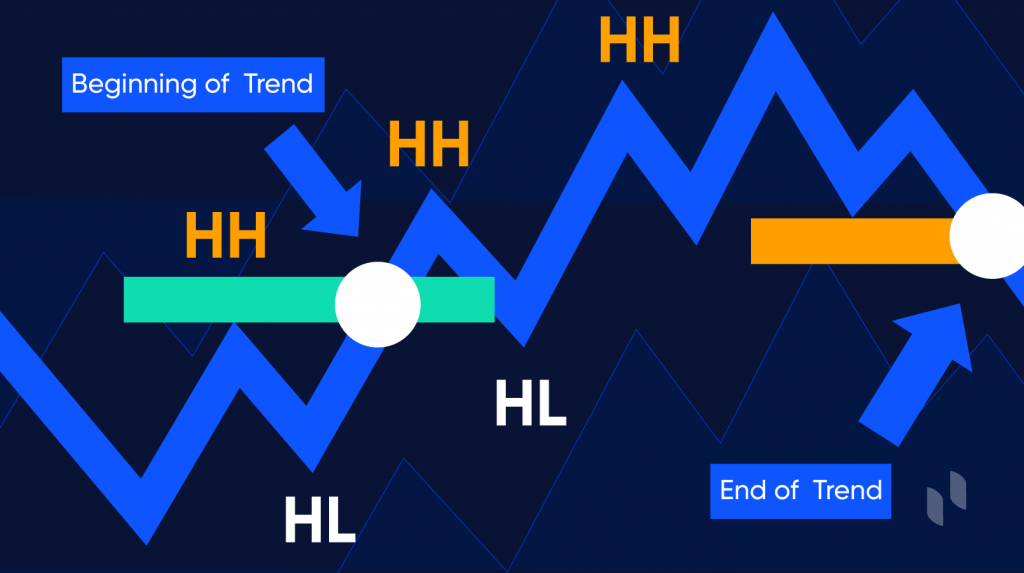 The world isn’t the same place as when Dow initially formulated his theory, and it has garnered both proponents and critics since. The theory is designed atop a few core beliefs or ‘tenets’. Dow created these tenets through years of market observation, and these nine rules are fundamental to using the Dow theory in financial markets.

The first is that stock indices are representative of all information available in the public domain, and unexpected events require markets to recalibrate to reflect the most accurate asset value. Dow’s tenets also propose three broad market trends: a primary and secondary trend, as well as minor trends.

The primary trend is the major market trend that can last from a single year up to several. It can point either up or down and generally indicates the broader multi-year direction of the market. However, while the primary trend tends to pique long-term investors’ interest, active traders take all observable trends into account.

Secondary trends are corrections to the primary trend. They act as a kind of counter-reaction to broader market movements, such as the brief period of recoveries during bear markets. They typically last anywhere between a few weeks to a few months.

Minor trends are more frequent market fluctuations that can occur on a daily basis. Some traders call these trends ‘market noise’.

Dow’s guidelines also state that market directions are only confirmed if all the indices conform with each other. It also posits that volumes fit to price movements, with volumes rising during uptrends and downtrends and falling during corrections and reversals.

During periods of market consolidation, the sideways movement can also be used as a substitute for a secondary trend, as markets can remain moving sideways for extended periods. The closing price is also widely considered the most crucial price level, representing the stock’s final evaluation for that day.

Three Phases of The Dow theory

The Dow theory implies markets move through a cycle of three phases: accumulation, markup, and distribution. The accumulation phase tends to occur right after a market sell-off, when the stock is undervalued and attracting institutional investors or ‘smart money’ due to its potential for long-term appreciation. With a regular stream of purchases from institutional money, sellers easily find trades, preventing prices from falling further.

The accumulation phase can last for many months and generally marks a market bottom, leading to the creation of strong support levels. Once all the available stocks have been absorbed, improved business sentiment tends to take the stock price higher through the ‘markup phase.’ During this phase, stock indices rise hard and fast, with its most noticeable feature being its speed.

The markup phase’s quick rally prevents much of the public from profiting from it, leaving new investors excited from the potential returns and analysts predicting higher prices. Finally, after the stock pushes to new highs, a more favorable business environment encourages market investment, causing the public to invest and kick-starting the ‘distribution phase.’

Early investors begin to sell off their stocks during this phase, finding easy trades due to high market demand. The distribution phase’s price movements are similar to those made during the accumulation phase, except prices trend lower. When prices attempt to rise, the smart money investors will offload their holdings, creating resistance levels over repeated cycles.

The distribution phase ends with a complete market sell-off, leading back into the accumulation phase and starting the cycle again. These repeated patterns present themselves across years, but it’s important to note that no two market cycles are identical. Some markets have more extended accumulation periods, while others spend more time in the markup and distribution phases.

When evaluating markets, it’s crucial to view these phases in the context of recent events and other market developments. Many consider the Dow Jones Industrial Average as tied to the state of the broader market, and in most cases, a well-performing Dow represents a strong economy.

How Accurate is The Dow Theory

The Dow Jones Industrial Average (DJIA), or Dow 30, tracks thirty publicly owned companies’ stocks available for trade on NYSE and NASDAQ. It is the second-oldest market index in the United States, with the first being the earlier mentioned Transportation Average. The DJIA was created to act as a proxy for the broader economy’s health and is primarily invested in through mutual funds, ETFs, or through derivatives contracts like futures and options.

As one of the most-watched stock market indices in the world, the range of companies included in the Dow 30 can be described as companies with consistently stable earnings, including firms like Microsoft, Walt Disney, and Exxon Mobil. As the economy changes, the Dow Jones index’s composition also shifts, dropping companies as they fade into irrelevancy and adapting to more current economic trends.

A company suffering from large losses due to its market capitalization may be removed from the Dow, and stocks with higher share indices are given greater weight in its calculations. Initially, the index was calculated by dividing the sum of the twelve stocks’ prices by twelve. However, with regular additional and removals to the index and having to account for mergers and spin-offs, over time, the simple average calculation began making less sense.

This inevitably led to the creation of the Dow Divisor – a constant used to determine movements of more than one-point in any of the 30 stocks comprising the Dow index. The Dow Divisor is predetermined, but there have been cases where its value has needed alteration to maintain the index’s value. The current Dow Divisor value can be found in the Wall Street Journal.

Unlike the S&P 500, the Dow Jones Industrial Average is not calculated using a weighted average, representing the ratio of the sum of the price of one share of stock for all components to the divisor rather than their cumulative market capitalizations. This allows one-point moves in any component to move the index too.

By 1928, the DJIA had grown to its current level of having 30 components, but its composition has changed 60 times since then. The first change was made just three months after the 30-component index’s launch, followed by many more changes in the years leading up to the Great Depression. The first large-scale change, involving the replacement of eight stocks from its composition, was made in 1932.

As we entered the third decade of this century, the Dow index stayed along its bullish path, peaking in February 2020. By the end of the first quarter, the index fell by 23% amidst the emerging global pandemic and its effects on national economies. Just weeks after touching its peak, the DJIA showed repeated days of losses along with other symptoms also seen during the financial crisis in 2008.

This marked the worst quarter the index had seen since 1987, but the market recovered by the third quarter, touching a new high as the year ended. However, critics of the Dow index claim it doesn’t accurately represent the state of the U.S. economy as it only consists of 30 large-cap companies.

Compared to the number and different sized companies set up in the United States, some analysts consider the DJIA’s number of components too small and believe the S&P 500 offers a better representation of the economy through a greater number of diverse data points. Upon closer examination, the correlation between the DJIA components is also observed to be higher when stocks are declining and lowest during flat movements and moderate price rises.

Additionally, some critics think a stock’s price is an incomplete representation of a company’s value compared to its market capitalization. Since the Dow Jones index weighs price movements based on stock price, the movement of a high-value stock belonging to a small company with a low market capitalization would impact the index more severely, providing a less accurate perspective on the economy’s health.

Dow Jones & Company is one of the most prominent financial news companies in the world and was founded by Charles Dow, Edward Jones, and Charles Bergstresser in the 19th century. Dow had a knack for explaining complicated financial topics to the general public and believed that a simple benchmark to indicate stock market trends was essential to investors.

Today, Dow Jones & Company continues to be a major and reliable source of news in the financial sector, with publications including MarketWatch and Barron’s. However, the firm does not have control over the Dow Jones index anymore. The index is currently owned by a joint venture between S&P Global and the CME Group called S&P Dow Jones Indices LLC.

While both the Dow theory and the DJIA have flaws, they have proven to be quite useful in a myriad of market scenarios. As the index continues to adapt to the economy, constantly replacing its components with the 30 most relevant companies, its reflection of the market will continue to evolve. With over a century of use behind it, the Dow Jones Industrial Average is a staple tool in the technical analysis arena. Understanding where it’s practical and where it fails can help make the most out of investing in the U.S. stock market.

← Hyperledger: The Framework for Enterprise-Grade Blockchain Solutions
What are Dark Pools: Large Trades For Institutional Investors →
About