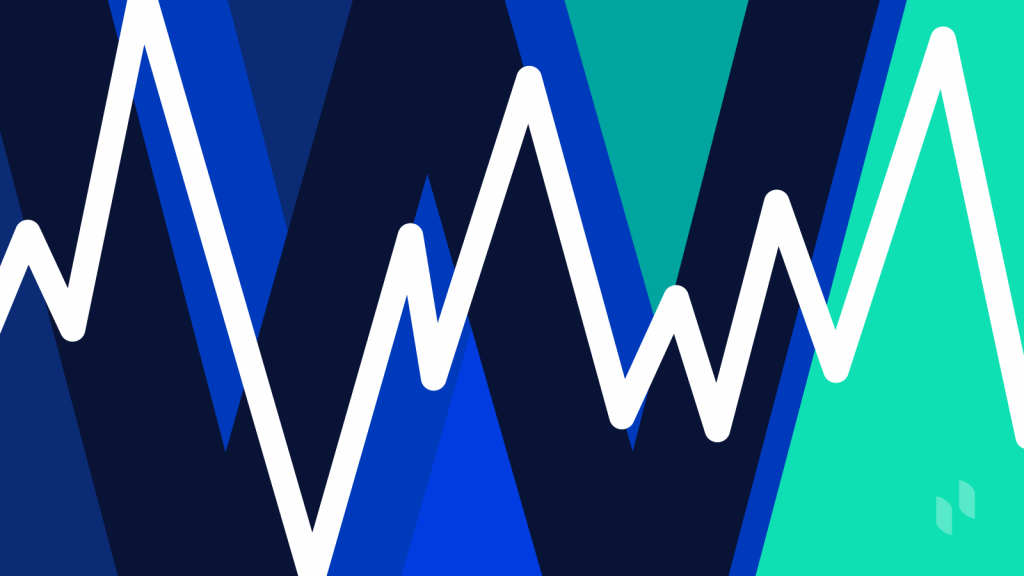 The Wyckoff Method is a technical analysis–based trading method developed by the famously successful stock trader Richard Wyckoff in the early 1900s. In his later years, he turned his focus to more altruistic goals by teaching the public how to beat what he saw as an unfair market. His theories and techniques, collectively called the Wyckoff Method, are now a staple methodology used to trade in many markets.

Who is Richard Wyckoff?

Richard Wyckoff was a very successful American stock market investor in the early 1900s. He was considered one of the titans of technical analysis of the stock market.

After accumulating his great wealth, Wyckoff began to see what he considered the swindling of the retail trader by big corporations in the market. As a result, he decided to organize his trading methods and teach them to the general public. His teachings were distributed through many channels, including his own Magazine of Wall Street periodical and his work as an editor of Stock Market Technique. A compilation of these teachings is now called the Wyckoff Method, and continues to guide traders in the stock market and beyond, including the crypto market. His methods are still used to this day to help discern ranges and to identify two of the most important phases of market cycles, the accumulation and distribution phase.

What is the Wyckoff Method?

The Wyckoff Method is a combination of several different theories and strategies. Each of the method’s components teaches an approach to the market and guides traders on when to accumulate or distribute their positions.

Fundamentally, Wyckoff believed that the market went through different phases.

To understand these phases in more depth, it’s important to master the foundational concepts of Wyckoff’s overall methodology.

What Are Wyckoff’s Three Laws?

The Law of Supply and Demand

The Law of Supply and Demand is a basic economic concept, not unique to the Wyckoff Method. The Wyckoff Method focuses primarily on how traders can analyze supply and demand to make informed trades. Specifically, this law involves three principles:

The Law of Cause and Effect

The Law of Cause and Effect is Wyckoff’s rule that says that every change (effect) is caused by certain factors occurring in the market (cause). Wyckoff states that price rises are the result of an accumulation phase, not random occurrences. Similarly, price drops result from a distribution phase. The cause — accumulation or distribution — is what creates the price effect.

The Law of Effort vs. Result

The Law of Effort vs. Result is used to determine whether a particular market trend will continue. This law compares the trading volume (effort) to the price action (result). Simply put, the purpose of this law is to highlight that most traders should only put in the effort to make a trade for a particular result. If the price action is reflected in the trading volume, then the market is in harmony when it comes to supply and demand. However, a lot of sideways trading and very little price action can foreshadow a reversal.

What Is Wyckoff’s Composite Man?

The “Composite Man” is a heuristic device presented in “The Wyckoff Course in Stock Market Science and Technique.” This tool gives traders a way to imagine the market in concrete terms and better understand its movements.

The basic idea is that the trader should imagine a single person behind all the actions on the market. To succeed, the trader would need to know what rules this person is playing by in order to beat them at their own game.

What is The Wyckoff Method: Five-Step Approach to the Market

Wyckoff recommended the following five-step process to help traders make decisions. Each step is considered essential to the approach.

What is The Wyckoff Accumulation phase?

The accumulation phase is a sideways and range bound period that occurs after a prolonged downtrend. This is the area where larger players try to build positions and shake out smaller fish without causing much of a further drop in price, or the beginning of the new trend. They aim to maintain this phase until all their positions have filled, hence the name “accumulation.”

According to Wyckoff, there are six distinct parts of the accumulation phase, all with an important function. Below are all phases and labels for reference. 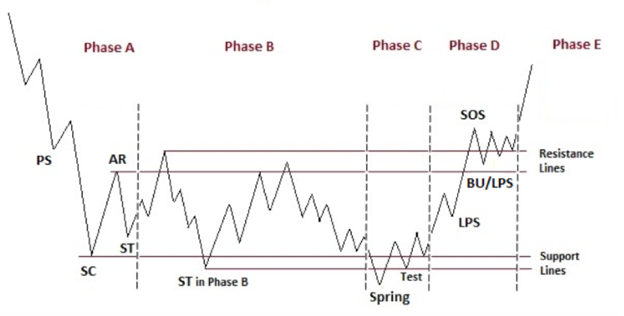 This occurs after a prolonged down move and we begin to see the signs of high volume and spreads widening. We also see the first indication that the selling may be coming to an end soon as buyers begin to show up.

This is where PS fails, and price begins to violently sell off. This is the panic selling phase. At this point, prices may jump by well over their norms and spreads can widen to extremes. Often, price will close far from the low and a candlestick chart view will display a very large wick.

This is the part where late sellers get punished. After price has violently sold off and selling pressure is no longer dominant, buyers cause price to reverse with almost the same level of intensity as the selling climax but in the opposite direction. This is the result of short sellers covering positions. The high of this point will often define the upper range extreme for the consolidation that follows.

This is where price revisits the lows of the structure but in a much more controlled manner. Volume should not increase by sellers. It is entirely common to have many secondary tests.

In crypto, this pattern should be all too familiar with Altcoins that have bottomed out for some time. This is the point in which suddenly a hard test of the low occurs again as a way to mislead participants into believing the trend is resuming downwards. This is almost the equivalent behavior to a “swing failure pattern”. It is essentially a shakeout. It should be noted that this movement is not always required. From here, price should respond by quickly reclaiming the prior structural level lost.

These following patterns of behavior should be clear shifts in price action from the prior activity into the beginning of the range. This is where price begins to reclaim microstructural pivot points that were established earlier. Often, the sign of strength can actually take place immediately following the spring. This will often be a very rapid and one-sided move that signifies buyers are in total control. Volume toward the end of the range should be high and result in significant ground covered.

What follows this range is known as the mark up. By then, the deed is done, and the market often will be left chasing the move upward resulting in a prolonged positive response. Ultimately, the purpose of this entire structure was to cause commotion and confusion so that larger players could take supply from smaller players.

One of the most important details in this activity is the volume observed. We want to see that in the beginning of the range following the high volume sell off, what follows is a return to low volume. Most importantly, after the spring and ultimately through the SOS and markup we should see that buying volume has a significant impact on price movement.

What is Wyckoff Distribution Cycle?

An accumulation cycle is typically followed by what is known as Wyckoff Distribution. 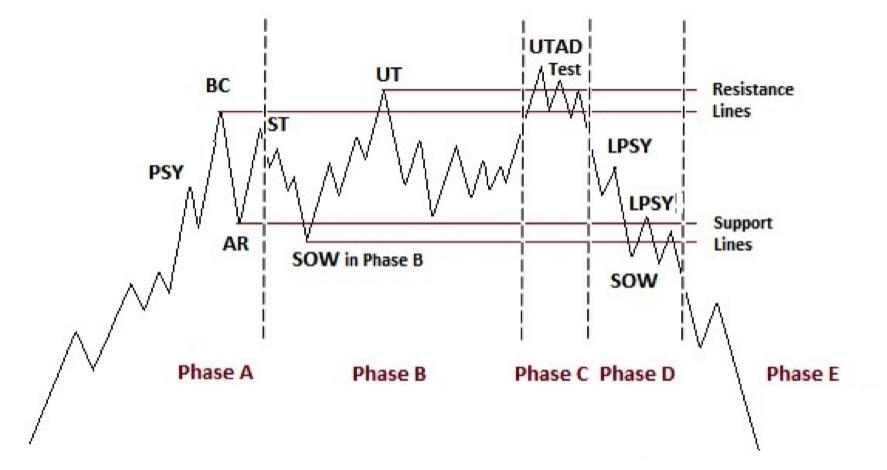 After the dominant traders have increased their position during the Wyckoff Accumulation cycle, they will sell off their positions when the asset’s price is high. The Wyckoff Distribution cycle will happen across five phases.

This phase typically occurs after a prominent price rise. Dominant traders will sell off large portions of their positions resulting in an increase in the trading volume.

The increased supply causes retail traders to begin taking up positions. This demand causes the price to continue rising. Dominant traders can sell off their positions at a premium price. However, this phase relies on high demand from retail traders so that the selling off by dominant traders does not bring down the asset’s price.

The end of the BC phase is marked by a price drop. This happens as less traders are buying up positions even though there is still a large supply available. The increased number of sell orders or supply causes the price to drop. It will eventually reach the AR level which is the lower price boundary of the Wyckoff Distribution Cycle.

In this phase, the price rises back to the BC range. This is where traders are testing the balance of supply and demand. The top price of this test occurs when there is more supply than demand. As the price reaches the BC price range, less trading will occur.

The SOW occurs when the asset’s price falls near or below the initial boundaries of the respective Wyckoff Distribution Cycle. This occurs when there is more supply than demand and signals price weakness. Following the SOW is the LPSY. In this phase, traders are testing the support of the asset’s price at these lower levels. There may be a small rally, but any rallies will be difficult as the result of either too much supply or too little demand. The last possible phase is the UTAD, which is just what it sounds like. This phase of the Wyckoff Distribution Cycle is not guaranteed to occur, but if it does, it will typically occur near the end of the overall cycle. The asset’s price will increase as the result of increased demand and push the upper price boundary of the entire cycle.

What is Wyckoff Reaccumulation?

Similar to the Wyckoff Accumulation cycle, the Reaccumulation cycle is a phase in which dominant traders are accumulating more shares. However, instead of accumulation during a downtrend, Wyckoff Reaccumulation happens during a price uptrend. The idea is that an asset’s price will reach a climax in a trading range and decline in trading activity. When this pause in price action occurs, typical traders will assume a downtrend is pending and sell off their positions. This results in a price drop where dominant traders can accumulate more positions at each price drop interval.

What is Wyckoff Redistribution Cycle?

The Wyckoff Redistribution cycle generally occurs during a prolonged price downtrend.  This cycle begins in the absence of dominant traders. Without this support, the asset’s price will experience a volatile downward trend. This will attract short sellers who are betting on this continued price action. As this short buying action generates profits, it will cause sharp price rallies. The first of these rallies is when the Wyckoff Redistribution cycle begins. Dominant traders will begin taking up positions at each interval of this trading range. When the asset’s price is at the top of the range, dominant traders enter short positions. As the price enters the next downtrend, they can buy to cover in order to protect their short positions. Buying to cover at the bottom of the trading range also helps to provide support for the asset’s price. As the price enters the next rally, the dominant traders can then enter additional short positions.

The Wyckoff Market cycle is hotly debated in crypto circles. Some claim that the signs involved in a Wyckoff Accumulation can be seen in the market changes for certain crypto assets, and others disagree. Regardless, understanding the potential causes occurring in the market is helpful. Learning about methodologies that other traders use can prepare you for making your own trading decisions.

By @CanteringClark and Phemex Contributing Writer

Get more Crypto technical analysis to improve your trading:

← How To Do Your Phemex Taxes With Koinly In 5 Steps
What is Ergo: A Programmable DeFi blockchain with an improved PoW protocol →
About