What is WAX (WAXP): Creating the Biggest P2P Market

Launched in 2017, WAX is a purpose-built blockchain that facilitates fast, safe, and straightforward e-commerce transactions. Its native utility token, WAXP, trades at $0.11 per token with a circulating supply of 1.66 billion, and a total market cap of $180 million. WAX is the 153rd most valuable cryptocurrency. WAX stands for Worldwide Asset eXchange and is the self-ascribed “King of NFTs.” The platform’s goal is to become the biggest peer-to-peer marketplace for digital items such as video games and in-game collectibles. Its biggest and most important group of users is the constantly growing community of over 400 million online gamers. With WAX, users can safely and conveniently create dApps and marketplaces, play games, and release, buy and sell NFTs.

All operations and activities on the network are made possible using the network’s native utility token, WAXP. It can be used to list items for sale, carry out instant transactions, settle the transfer of virtual goods, create and service contracts, and vote for WAX Guilds.

Many problems that the global gaming industry faces today can be solved by using WAXP, blockchain settlements, and smart contracts. The WAX blockchain uses delegated proof-of-stake (DPoS) as its consensus mechanism, and unlike Proof of Work (PoW), it does not need miners to operate the network. It is fully compatible with EOS, smart contracts, thus offering low fees and free user accounts. WAX’s native token WAXP initially launched as an ERC-20 token on Ethereum (ETH) and later switched to the EOS blockchain. Token holders were given a span of two months to swap their WAX-ERC-20 tokens for WAX-EOS tokens.

What Does WAX Do?

The WAX blockchain is operated by 21 paid Guilds and 36 standby Guilds. Paid Guilds produce blocks, operate the WAX blockchain, and contribute to the WAX ecosystem while collecting rewards in return. Through voting, token holders are able to decide who gets to be a Guild.

Holders earn rewards by staking, and once they have staked their assets, they are eligible to vote weekly. There are two different ways to vote. The first way is by selecting at least 16 and up to 30 Guilds. You can vote for them using your WAX account. The second option to vote for Guilds is by selecting a proxy. Community members manage the proxy, which will vote in your place. Proxies are an easy and quick alternative for users not willing or able to vote themselves.

While there is no obligation to vote regularly, experts suggest users vote at least once a week. This is because a user’s vote strength decreases after every vote. Immediately after a vote, the voting strength is at 100%. This percentage slowly decreases to 0%, causing the influence of the user’s vote to go down, and with it their staking rewards.

Regular WAX users can claim two different types of rewards: staking and GBM rewards. Staking rewards can be earned by staking assets, while GBM rewards can be earned by GBM WAX protocol tokens. The latter approach is designed to reward long-term WAX-community members. They can be claimed every four hours (or less frequently) but are not automatically added to a user’s account. Rewards can be stored in the popular and very convenient WAX cloud wallet. The wallet allows the user to easily interact with the WAX blockchain and the dApps built on it. It can be used on mobile phones and makes the usually complex process of collecting NFTs as simple as collecting physical items.

Who Is Behind WAX?

WAX is managed by a highly competent team that has had much experience with virtual trading. William Quigley (CEO) and Jonathan Yantis (COO) are the co-founders of WAX.

William Quigley studied at the University of Southern California and worked at Disney. He received an MBA at Harvard and has gathered 25 years of experience as a technology-focused venture capitalist. He is the managing director at Clearstone Venture Partners and Magnetic. Quigley was the first institutional investor in Paypal. He also co-founded Tether, the first fiat-backed stable coin and the world’s most traded cryptocurrency.

WAX launched on December 21st, 2017. During the 2017 bull run, WAX hit its all-time high of $4.60, but very quickly fell to below $1.00. To date, it has not reached its launch price again and instead has continued to hit lower lows. An exception was at the beginning of 2021, when WAX followed the generally bullish market pattern and peaked at $0.32 in March. It is currently trading around $0.102. 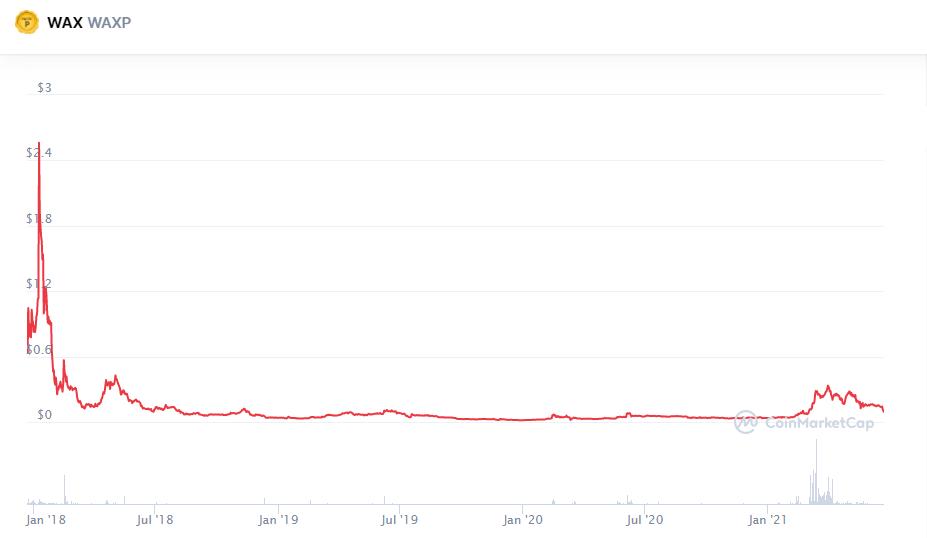 What Is the Outlook for WAX?

With 400+ million online video gamers worldwide, WAX has a huge potential audience which only seems to be growing, especially due to the current COVID-19 pandemic. The gaming audience is also generally more familiar with the concept of digital money and cryptocurrencies since virtual money has played an important role in online gaming for many years. These in-game assets are coming to the blockchain now and gamers are more likely to understand and appreciate crypto. Therefore, WAXP has the potential to gain immensely in value over the coming years. WAX’s multiple partnerships, for example with Reebok, DeadMau5, and Major League Baseball, contribute to a positive outlook as well.

However, the project also has its downsides. During the WAX ICO from November 15 to November 29, 2017, investment firms paid $1.2 million worth of Ether (ETH) towards the WAX ICO presale. Due to WAXP’s downward price performance since its launch, one of the investors, the Crypto Asset Fund, has filed a civil complaint containing 12 charges. These include fraud, unlawful business practices, and violation of the Securities Acts of 1933 and 1934.

According to the investor’s claims, WAX allegedly released 1.85 billion tokens instead of the originally planned 185 million at launch, causing the price to drop dramatically from over $4.00 to under $1.00. Another complaint addresses how WAX delayed delivering the promised tokens to the Crypto Asset Fund for several days. When WAXP’s price peaked and shortly after collapsed, the investors could not profit. Crypto Asset Fund blames WAX for intentionally securing their investment for an online game operation instead of creating a functioning network and token. These complaints have negatively impacted WAXP’s price to this day, making it difficult for the token to rise in price and for the network to regain the trust and faith of disgruntled investors.

The WAX network is a promising, fully functioning project backed by a competent and experienced team. It also has a large audience of online gamers already familiar with virtual payments. Despite the project’s enormous potential, its native utility token’s price still suffers from the initial mistakes made during and after the release. As a result, the price of the network’s native token WAXP has never recovered. Whether the price will rise or whether the WAX team will develop new ideas to make their project more attractive to investors remains to be seen. Introducing new tokenomics or through increased adoption of WAX marketplaces could be part of the solution.