Launched in 2019, THORChain is a decentralized, permissionless liquidity protocol. THORChain’s native coin RUNE trades at $9.32 per token with a circulating supply of approximately 234 million and a total market cap of just over $2 billion. It ranks as the #50 most valuable cryptocurrency. 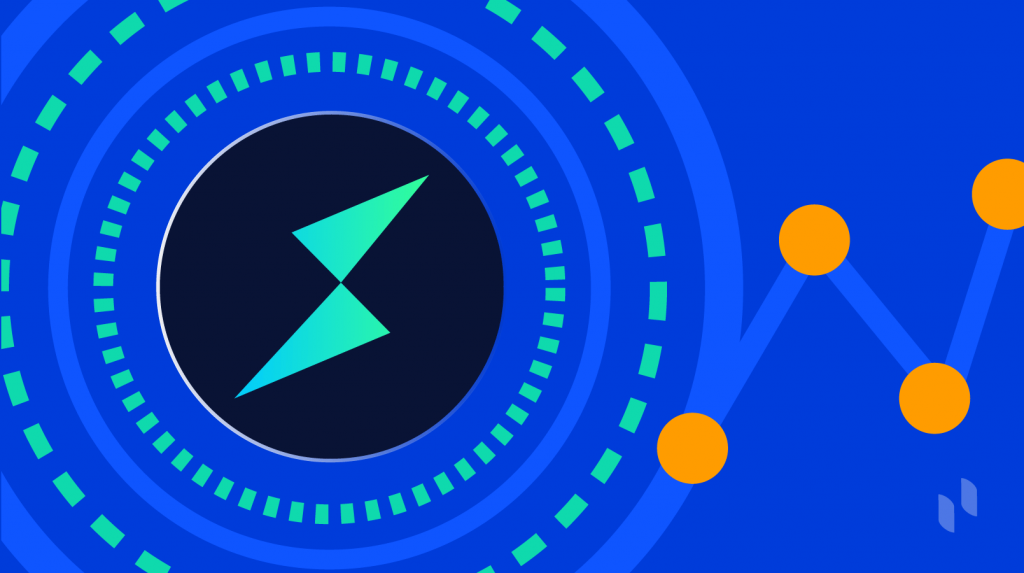 THORChain’s developers initially started the project during the Binance Hackathon in 2018 and launched their first test version shortly after. The developers viewed low-liquidity transfer systems employed by centralized exchanges as flawed and aimed to create a superior alternative. Although the team continued their research after the Binance Hackathon ended, not all the required technology was readily available, which delayed the development process. The project was eventually launched on Binance DEX in July 2019. It raised $1.5 million through an IDO for its further development. THORChain’s limited mainnet initially launched in January 2021, while a multi-chain upgrade is currently scheduled for 2021. As THORChain is a decentralized exchange (DEX), there is no need for its users to trust a third party with their funds.

THORChain is built on Cosmos SDK and Tendermint and uses a Proof of Stake algorithm, thereby differing from most DeFi protocols built on Ethereum. THORChain does not have its own blockchain, but it still resides on top of the BNB Chain. Its main benefit is that users can easily and instantly swap real assets such as Bitcoin (BTC) or Ethereum (ETH) across various blockchains.

On most decentralized exchanges, blockchains are isolated from each other. Thus, cross-swapping is only possible by taking extra steps such as using wrapped or pegged tokens, which involves additional costs. Usually, such methods entail an automatic tradeoff regarding a trader’s assets’ custody and security. As such, THORChain provides a solution for a significant problem most other decentralized exchanges are facing.

Its utility token RUNE is used for most operations on the network, such as transactions, trades, the payment of rewards, and especially cross-chain operations. All RUNE tokens were minted pre-launch.

What Does THORChain (RUNE) Do?

THORChain removes the barriers between blockchains by using its unique continuous liquidity pools connected to various blockchains that are otherwise isolated from each other. These pools contain staked assets and the network’s native token RUNE, which is used for most network-internal operations. Each asset is staked in a separate pool with RUNE. For example, there are pools containing Bitcoin with RUNE, Ethereum with RUNE, and Litecoin (LTC) with RUNE. When native cryptocurrencies such as Bitcoin and Ethereum are swapped, they are not technically paired with each other. Essentially, two separate trades take place simultaneously. When users exchange Bitcoin for Ethereum, they actually follow a two-step process. They sell Bitcoin for RUNE before spending RUNE again to buy Ethereum. This process is in place to avoid an oversupply of liquidity pools in the network.

There are three main ways to participate in the THORChain network. First, users swap assets and pay a transparent, slip-based fee for this service. The fee is charged due to gas fees on external services and serves as a fast swap execution. The faster the users wish the swap to be executed, the higher the fee. Users’ assets are held in private vaults.

Secondly, liquidity providers play a crucial part in the THORChain network. They enable cross-chain swapping by staking assets into pools with RUNE. The providers earn liquidity rewards for their service in RUNE once they withdraw their assets from pools. The exact amount they receive depends on fees generated by the pools.

Thirdly, nodes (THORNodes), or node operators have the function to secure the network. They also create vaults and validate incoming and outgoing transactions by producing blocks on the blockchain. To qualify as a node operator, 1,000,000 RUNE (approximately $100,000) need to be bonded, which is a way of securing the network. Every three days, older nodes are removed from the system and are replaced by new ones. To reactivate their status, node operators must update their software to the latest version. This is an effective way of keeping the system updated at all times. Just like liquidity providers, node operators get rewarded in RUNE for their service. If node validators were to conduct malicious behavior, the network is equipped to punish these individuals by slashing their bonded tokens, which makes such incidents less likely.

For an optimal security level, 67% of the network’s RUNE needs to be bonded to the nodes while 33% are staked in the liquidity pools. If there is too much RUNE staked in the pools, the node operators’ rewards are increased. In contrast, the liquidity providers’ rewards are decreased. If the amount of RUNE bonded to nodes exceeds the suggested amount of 67%, the opposite distribution of rewards occurs. This optimal state is called the Incentive Pendulum. Another feature contributing to a high-security level is the Threshold Signature Scheme (TSS), which enables nodes to sign contracts anonymously.

Who Is Behind THORChain (RUNE)?

Most contributors involved in the THORChain project have stayed anonymous. The team believes that anonymity is necessary for the network’s success as a decentralized exchange. Only ten employees are listed on LinkedIn, and 12 team members with six additional advisors are listed on ICOBench.

According to a tweet from ThorChain’s official Twitter page, “THORChain has no CEO, no founders, no directors.” In addition, their website states, “figureheads, personalities, and founders undermine a project’s ability to decentralize,” and that “transparency is demonstrated in other facets (treasury, code, research).” For example, the team also provides the community with transparent weekly updates concerning the project’s development.

Moreover, a group of developers is active on Github, where a self-organized team of developers and voters works together. They attempt to execute the bare minimum of governmental decisions to keep the network as decentralized as possible, and instead, make staked capital the market’s main driver. For example, new assets are listed quickly on the exchange, making many governmental network decisions obsolete.

RUNE has seen its first major price movement only in January 2021, when the launch of THORChain’s mainnet and an overall bullish market environment coincided. Since then, RUNE’s price had been on an uptrend, reaching its all-time high of $21.26 on May 19, 2021. It fell to just under $8 within only three days, followed by two smaller spikes to $14 and $13. Currently, the price hovers around $9 per token. 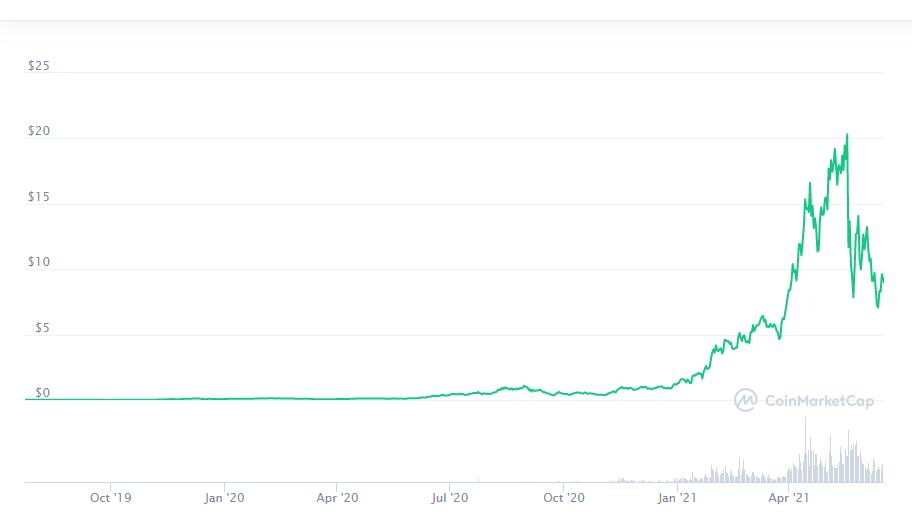 What Is the Outlook for THORChain (RUNE)?

According to Crypto Coin Society, Walletinvestor and other sources, THORChain and its native token RUNE have a bright future in the short and long term.  With its continuous liquidity pools being unique in the industry, THORChain is one of the few first projects tackling the revolutionary task of making easy and safe cross-chain swaps possible on decentralized exchanges. Experts expect the project to grow further over the next five years as more features and updates are added to the network, and a growing number of similar projects start to emerge. According to Walletinvestor, RUNE’s price is expected to increase by 249% within a year and reach a price of just under $130 by 2026. Therefore, the most significant price movements are yet to come. RUNE’s only downfall seems to be the team’s anonymity, which has caused some crypto community members to be hesitant when considering their investments in the project. 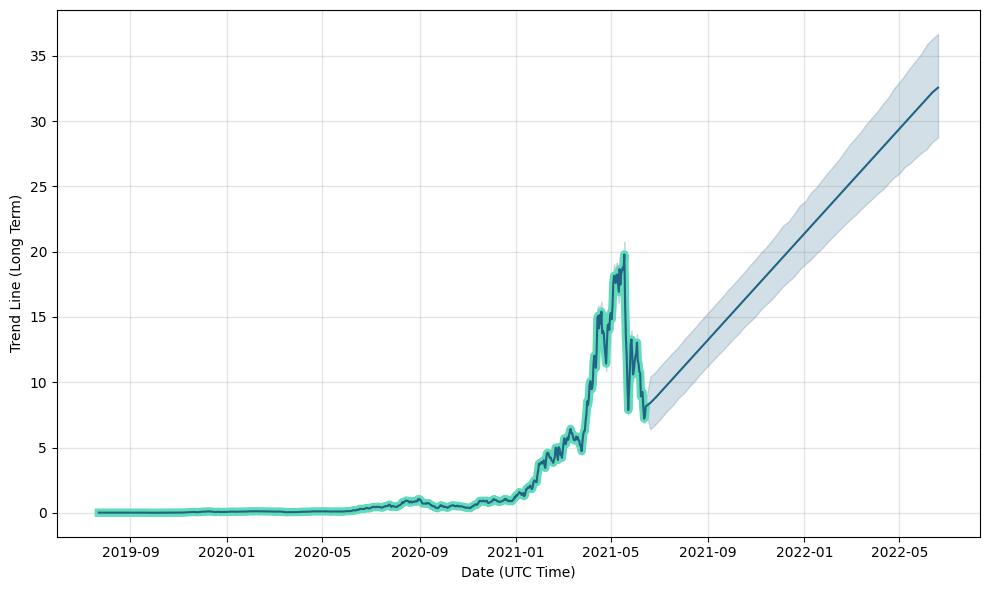 THORChain (RUNE) provides a promising solution for swapping any asset across blockchains. As such, the network is superior to other decentralized exchanges which lack this revolutionary feature and are still isolated from each other. THORChain (RUNE) is still a recently launched project that has only begun to gain significant traction at the beginning of 2021. Primary reasons were the launch of its limited mainnet and the overall bullish market environment. With more updates and features yet to come, the price is likely to increase over the coming years, and the project and its investors seem to have a bright future ahead. Although the lack of information about THORChain’s team may cause hesitancy for some investors, the team’s anonymity protects the network’s purpose as a truly decentralized, permissionless and trustless exchange. In addition, the team regularly provides the community with updates heightening their transparency and trustworthiness. As such, THORChain’s benefits outweigh the possible downsides.