What Is The Synapse Protocol?

The Synapse protocol is a cross-chain bridge that allows for the transfer of assets between blockchains, securely and efficiently. In other words, it exists to solve the problem of cross-chain interoperability by enabling core blockchain activities like asset transfers, swapping, and messaging by offering decentralized, permissionless transactions between L1, L2 and sidechain ecosystems.

For example, people can use Synapse Bridge to transfer stablecoins from blockchains such as Ethereum, Polygon, Avalanche, Harmony and more. Developers can also use the Synapse protocol to create useful cross-chain applications such as cross-chain DEXs, derivative markets, and landing platforms.

Once the user has provided this information, they will also need to give Synapse the approval to make transactions by approving the token and then they can go ahead to bridge the token.

The native Synapse crypto, SYN token, trades on several exchanges with a circulating supply of 180.2 million tokens at a price of $0.97 at the time of writing for a market cap of $173.4 million.

How Does the Synapse Protocol Work?

The Synapse network is a decentralized, leaderless platform. It is secured by cross-chain multi-party computation (MPC), which operates using threshold signature schemes (TSS) which are private and public keys used to authenticate transactions.

This is how it ensures high security standards: When on-chain events are received on any of the chains being tracked by the MPC validators, each validator runs the same process, and when two-thirds of the validators have signed the transaction, the network reaches a consensus, the transaction is validated and sent to the destination chain.

Synapse users reach out to the community to become validators. In order to participate in the validation process, validators must stake SYN to help secure the network. If they engage in dishonest or malicious behaviours, validators’ staked balances will be penalized, just like how other proof-of-stake chains work.

The Synapse automated market maker (AMM) technology transforms tokens from one blockchain into the native of tokens of a destination chain through the use of stable swap algorithms, which is responsible for determining an exchange price for assets within the cross-chain liquidity pools. This ensures a smooth transfer of assets between different platforms and ecosystems with minimal inefficiencies, losses and slippages.

The SYN token is the native token of the Synapse protocol, used to access services on the network. Core functionalities of the SYN token include:

There are 6 types of fees on the Synapse protocol:

What is Synapse Chain?

The Synapse chain will also allow developers to build new sets of protocols which will be able to interact with assets on other blockchains.

In addition, the Synapse ecosystem will eventually include core DeFi features such as a decentralized exchange (DEX), derivatives and lending platforms.

The Synapse bridge is designed to be a secure and efficient way to transfer assets between different blockchains. The project has also been audited by multiple security firms. It is constantly being monitored by the team to guard against security vulnerabilities. In November 2021, Synapse’s network validators identified unusual activity in the platform’s AMM metapools and successfully prevented an attempt of an $8 million cross-chain breach.

The Synapse protocol has seen much growth since it was launched in 2019. The current total pool volume is $23.85 billion with a total revenue of $17.37 million. Synapse supports up to 16 chains including both Layer 1 and Layer 2 networks such as Ethereum, Polygon, Avalanche, Arbitrum and Optimism.

With industry-leading speeds, Synapse achieved a new milestone in May 2020 as the protocol surpassed $10 billion in worth of total bridged assets. This is not surprising – as the DeFi ecosystem saw exponential growth in 2021, so has the demand for a secure and efficient way to transfer assets between blockchains.

Competitors include Ren, Wormhole, Multichain, Stargate, and Arwen, but Synapse has gained a reputation as the most efficient protocol for transferring assets between different blockchains.

Who Is Behind Synapse Crypto?

There is not a whole lot of information about the Synapse team, but in a March 2022 Twitter post, Max Bronstein announced that he would be joining the Synapse protocol core team as the COO. Bronstein has previously held positions at other crypto startups such as Coinbase and Dharma. Synapse has received funding from several investors such as Alameda Research, CMS Holdings, DeFiance Capital, Immutable Capital, and Mechanism Capital.

A rebranded version of Nerve finance which was originally launched in March 2021, the Synapse crypto (SYN) was launched on 26 September 2021 at a price of $2.38 after which it experienced a bearish trend until October 2021. The token started seeing a significant rise, reaching an all-time high of $5.01 in October 2021. This can largely be attributed to increasing interest in the project, the rebrand and partnership announcements. 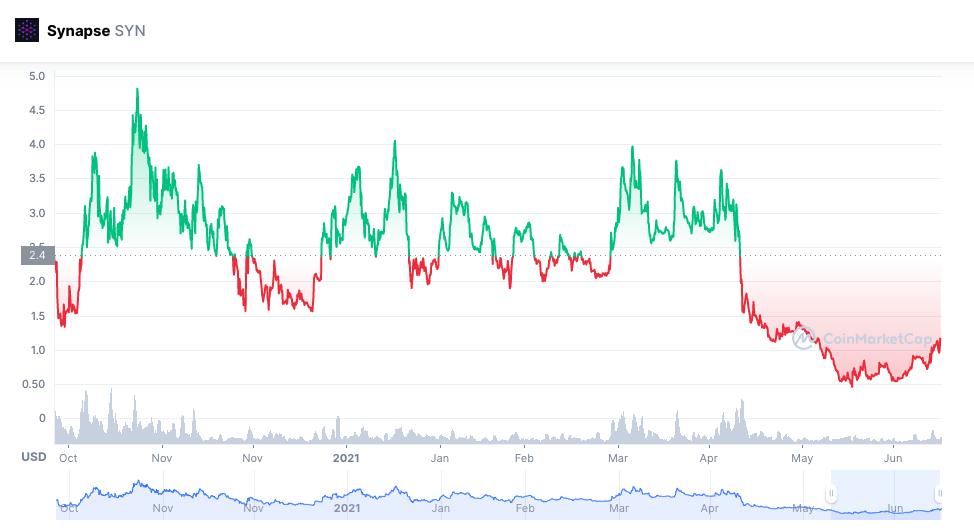 However from May 2022, it started to see a drop in value which can be associated with Bitcoin’s price depreciation and a general downtrend in the crypto markets. Today, the SYN crypto trades for $0.97 with a circulating supply of 180.2 million tokens and a market cap of $173.4 million.

The Synapse protocol has proven to be a secure and efficient way to transfer assets between different blockchains. Although it has experienced some challenges such as the attempted $8M breach in the fall of 2021, the team behind the project is undaunted, and continues to work on adding new features, improving security and expanding its reach. The future looks promising for the Synapse protocol and its SYN token.