What is Livepeer (LPT): A Decentralized Approach to Live-Streaming

Video streaming is one of the most important aspects of the internet and one of the most popular ways users consume content in 2022.  Unfortunately, video streaming, especially live streaming, has traditionally been quite expensive and difficult for companies given the massive amount of storage and bandwidth required. In fact, 80% of all internet bandwidth worldwide is consumed by video streaming. One project that is hoping to change this is Livepeer (LPT), a video streaming protocol that provides developers and broadcasters decentralized video transcoding and distribution services. Livepeer’s coin LCP is currently trading at $27, has a circulating supply of 21 million tokens, and a market cap of $585 million. 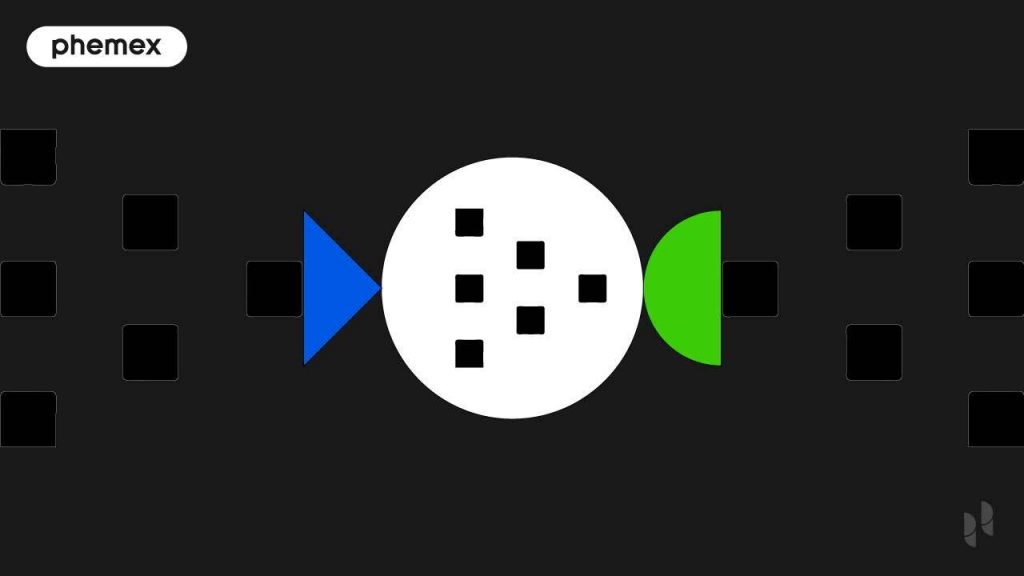 Livepeer is a decentralized streaming protocol that supports the streaming of both live videos and on-demand videos. Livepeer provides the back-end video transcoding and distribution infrastructure that developers can build applications on. Livepeer is not a video streaming service and does not have a website or application users can visit to watch videos. Livepeer is less like Netflix and more like Amazon Web Service (AWS), the company that manages all of Netflix’s databases, storing, and video transcoding. 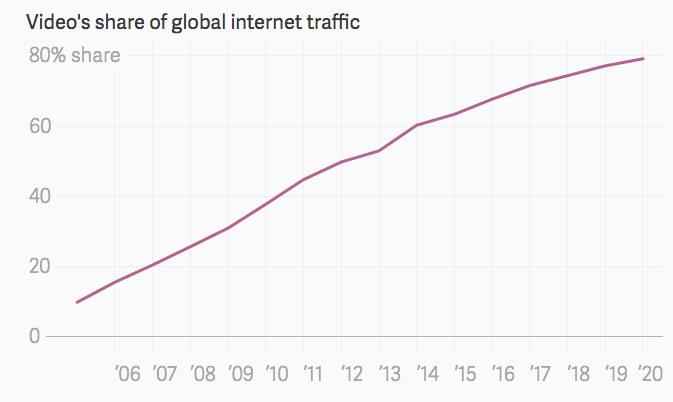 Current video transcoding and distribution companies are typically centralized and expensive. Many companies are unable to afford the expensive prices demanded by companies like AWS. And many blockchain projects are unable to integrate these transcoding services into their applications as the existing infrastructure is centralized and built off-chain. Livepeer is decentralized, open-source, and built on the Ethereum blockchain, thus allowing any Ethereum project to easily integrate Livepeer and video streaming into their application. Furthermore, Livepeer’s innovative decentralized network allows them to offer cheaper and more reliable services than the traditional video transcoding and distribution market.

How Does Livepeer Work?

The Livepeer Media Server (LPMS) is an open-source and decentralized media server and video transcoder created by Livepeer.

Video transcoding is the act of taking video and audio inputs and transcoding them into alternate encodings, bitrates, and delivery formats. This is a necessary part of video streaming as it ensures the video recorded can be played on any screen and device, as each screen has its own formats and bandwidths. 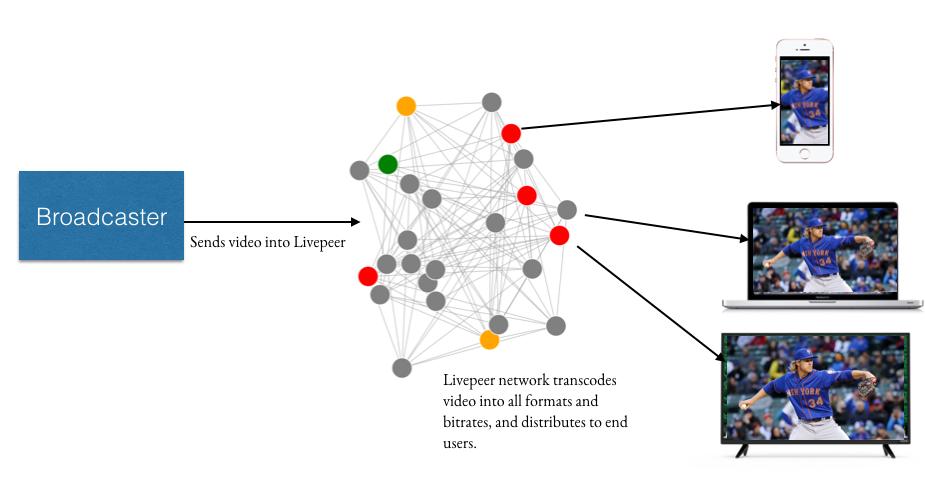 The Livepeer network is not a free product. Users who set up nodes expect payment for the computational power and bandwidth they are providing. Payment is fairly simple, the Broadcaster pays the Livepeer Network in Ethereum (ETH), and each node receives a portion of this fee proportional to the bandwidth and processing power they provided.

Additionally, the Livepeer network has a built-in reward system that provides the transcoders who do more work with free LPT coins. This essentially creates a feedback loop where the more LPT each transcoder stakes, the more work they can do, and the more LPT they will receive as a reward. The transcoder can then stake their LPT reward and earn themselves even more work. This system successfully rewards the most active and high performing contributors within the Livepeer network. Because LPT coins have monetary value and can be sold and exchanged for other cryptos, the Livepeer reward system also serves as an additional form of revenue, as transcoders can chose whether to stake the LPT they receive or sell it on the open market. Having this additional stream of revenue provides transcoders incentive to lower the Ethereum-fee they charge to broadcasters, as this creates more demand and work for their transcoding services.

Who Is Behind Livepeer?

Livepeer has raised over $50 million across its series A & B rounds, and is backed by investors such as Tiger Global Management, Northzone, Notation Capital, Coinbase Ventures, CoinFund, and more.

LPT coin debuted at $7 in 2019. After its launch, LPT spent much of 2020 trading downwards and reached a low of $1 before quickly exploding to $43 in May 2021. This rise to $43 was largely driven by Grayscale Investment – one of the largest and oldest crypto investment firms – announcing the addition of LPT into their family of products. This rise was also partially driven by fundamental factors like the project’s rapid growth in user activity and fees collected. 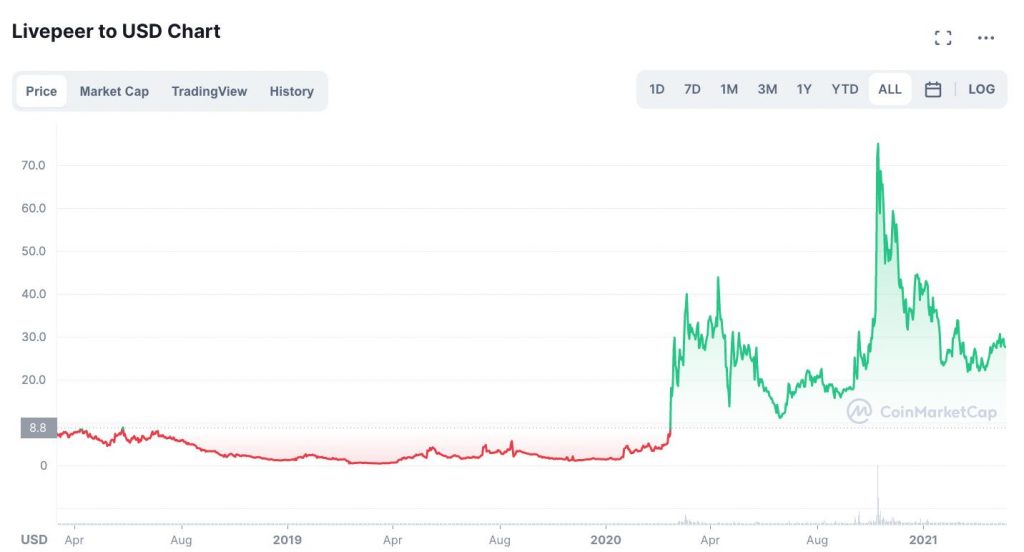 After reaching $43, LPT traded downwards for a few months before later skyrocketing and setting its all-time-high (ATH) of $100 in November 2021. This meteoric rise to $100 was driven by several factors including their impressive acquisition of MistServer, the growing publicity surrounding the Livepeer project, and the booming crypto-wide industry. Unfortunately, this ATH was short-lived and LPT’s price soon crashed down to the mid $20 range. This drop in LPT’s price can largely be attributed to a market-wide crypto crash that saw industry leaders like Bitcoin drop 45%.

What Is The Future of Livepeer?

Livepeer is primed for future success. They have discovered a genuine issue and pain point within the streaming industry and have provided a viable product and solution. Livepeer is positioned to serve as the primary transcoding and streaming infrastructure for all blockchain projects hoping to integrate video into their applications – essentially becoming the AWS of Web 3.0. The market they operate in is incredibly large and Livepeer has seen continually growing usage rates since its inception.

The biggest factor that will influence Livepeer’s success is competition. With a market that is large and lucrative, new projects are likely going to develop in hopes of taking advantage of the available profits; however, currently Livepeer is operating relatively unchallenged. Although many blockchain and crypto companies are operating within the video streaming industry, there are few other major players within the infrastructure side of streaming.

One of Livepeer’s most prominent competitors is Theta Network (THETA). Theta Network is also a decentralized streaming service that operates a blockchain transcoding service. However, the two have a central difference. Theta is a project that provides video content to users but also operates its own transcoding technology. Livepeer is a backend infrastructure platform that provides transcoding and distribution services for other projects and operates as a layer that blockchain applications can be built on. A broad comparison here would be Theta as YouTube – a content streaming platform – and Livepeer as Amazon Web Services – a back-end infrastructure platform. However, whether Theta or other projects expand into Livepeer’s market is still uncertain and something prospective investors should watch closely.

In terms of future plans, Livepeer’s central focus for the remainder of 2022 is to improve its existing products, specifically improving their transcoding workflow, the Livepeer Delegation System, and the Livepeer Protocol.

Livepeer is a decentralized video streaming infrastructure project focusing on transcoding and distribution. Livepeer hopes to innovate upon the traditional streaming industry to create a faster, cheaper, decentralized, and more scalable form of streaming. Those looking for a decentralised Web 3.0 project, should undoubtedly give Livepeer heavy consideration.