The ICON Network, which was established in 2017 by a South Korean blockchain start-up, is a decentralized platform powered by LOOPCHAIN technology and the ICON token (ICX). The Network’s aim is to build a decentralized world where all blockchains, or “communities,” are linked together and can easily exchange currency and information. These include blockchains such as Ethereum (ETH) and Bitcoin (BTC), as well as the entities that use them, including banks, governments, businesses, schools, and hospitals. The ICON Network’s market cap today stands at over $500 million.

How Is the ICON Network Structured?

ICON was developed to overcome the obstacles present with today’s blockchains, and to create a world of true “hyperconnectivity.” In order to achieve this, it runs on a proprietary blockchain called LOOPCHAIN, which can handle hundreds of transactions per second, and employs its ICX tokens to let its community members easily exchange value in real-time. Moreover, its actions are decided by votes from community-selected representatives, thereby ensuring decentralization.

The Basic Structure of ICON

The expectation is that as communities increasingly use smart contracts to maximize working efficiency, their internal processes will evolve. Additionally, as interactions with the outside world increase, exchanges between communities will also change. When this happens, rather than handling external affairs through a centralized institution, each community’s smart contract will become the subject of the transaction, and the connection between the smart contracts will handle the work. 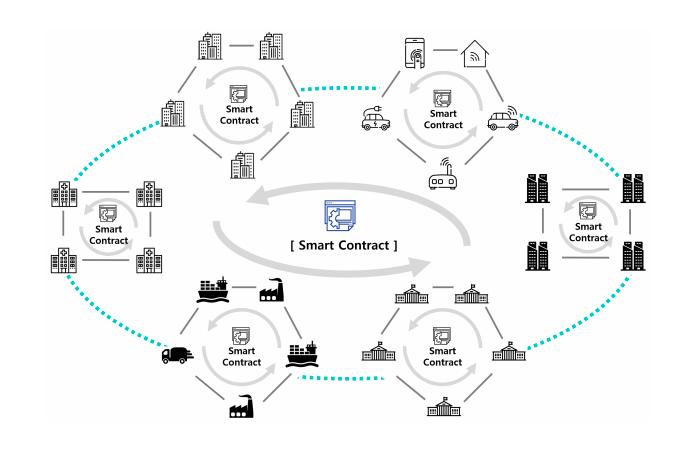 This simplified breakdown shows the ICON Network’s aim to facilitate connection across borders and to create a more democratized process. For more details, take a look at the ICON whitepaper.

Each ICON community’s ability to create its own blockchains and coins has spurred entrepreneurship in various fields:

Who Is Behind ICX?

Korean-American entrepreneur and investment banker Min Kim is the brains behind ICON. Using his South Korea-based fintech company, DAYLI Financial Group, Kim reached out to another South Korean blockchain company, ICONLOOP, for help creating the network and making it available for cross-chain operations. An advantage of working with ICONLOOP was its close connection to the South Korean and Seoul Metropolitan Governments, for whom it develops public and private blockchain solutions.

The initial coin offering (ICO) for ICX in September 2017 raised roughly $43 million in its one day of sale. Coins were priced at around $0.50, and 50% of the supply was sold. The ICON blockchain was then officially launched in January 2018, and participants in the ICO received their ICX cryptocurrency in June 2018.

The token enjoyed a rapid surge during the late 2017 and early 2018 bull run, rising to $12.19 in January of that year. However, thanks to the Great Crypto Crash of 2018, it did not stay there long. Alongside the whole crypto market, it found itself plummeting to lows of $1.96 in March, and after a momentary rise, all the way down to $0.59 by September. Compared to its counterparts, ICX sees less investment, possibly due to its long and fairly stable stretch between late 2019 and early 2020, where it largely traded between $0.30 and $0.50. However, the token has seen a little more movement this year, rising with crypto’s general uptrend and falling after major announcements from Elon Musk and the Chinese government. ICX reached a high of $3.12 at the end of March, possibly helped by the success of its DID DApp, and then dropped in value. Today, one ICX coin is worth $0.79. The token has a total supply of about 800 million, and a circulating supply of 640 million.

Despite lower investments in ICX than in some similar cryptocurrencies, the ICON Network has a lot to offer and a lot in the pipeline, which could suggest a rise in the future. In addition, its blockchain technology has received considerable backing from powerful sponsors. For example:

This backing by governmental institutions will certainly set the ICON Network and its token in good standing with prospective users. However, with its usage currently being very South Korea-centric, its value might not change dramatically unless it sees international expansion.

← What Are Ethereum Layer 2 Solutions: Decentralized Scalability
Crypto Token vs. Coin: The Key Differences Explained →
About