What Is Bitcoin Rainbow Chart: So Easy A Child Can Read It 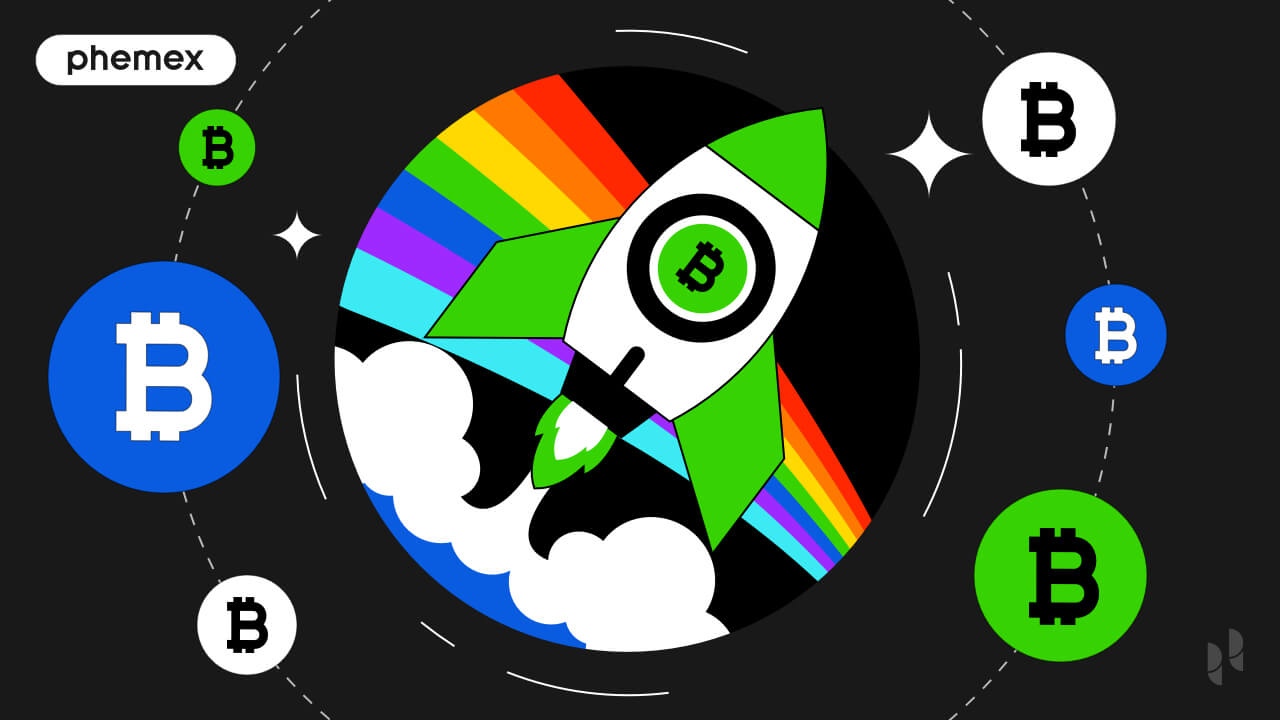 What Is The Bitcoin Rainbow Chart?

The Bitcoin Rainbow Chart, also known as BTC rainbow chart, is one of the oldest tools to look at the long term price of Bitcoin. It was developed by an early Bitcoiner who goes by the name Azop on Reddit, as a “fun way of looking at long-term price movements, disregarding the daily volatility ‘noise’.”

The chart is so named because of the colored bands that denote the market sentiment at different price ranges, which can signal to investors when to buy or sell in the crypto market. 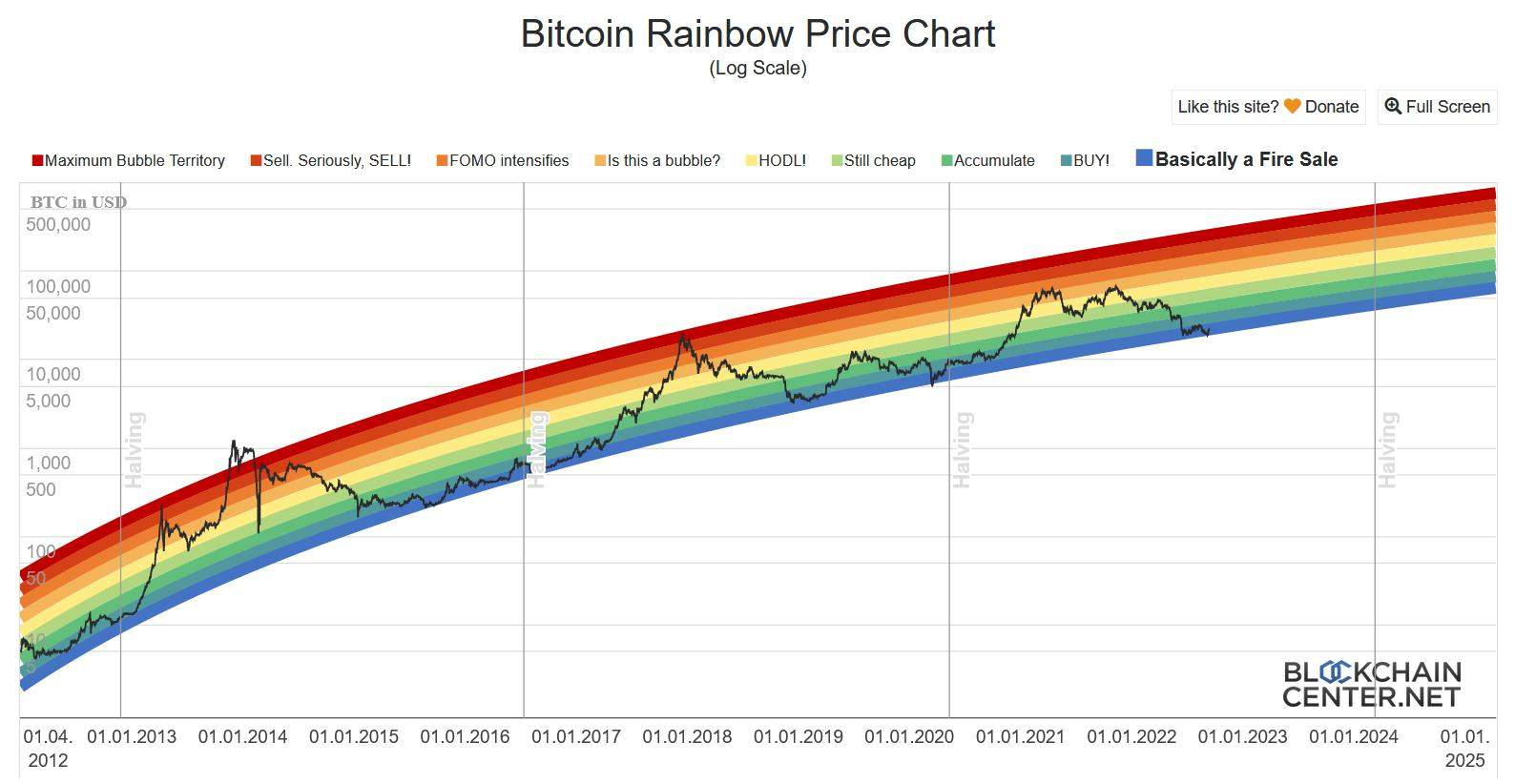 For example, when BTC price is in the red range, it means market sentiment is euphoric and it may be a good time to sell, because when the bubble bursts, prices will soon fall.

At the other end, when it is on the indigo band, market sentiment is probably extremely negative and it may be a good time to buy, because BTC is undervalued at that point.

But because daily crypto volatility is not factored in, the Bitcoin Rainbow Chart is mostly used as a basic tool to track long-term price movements for long-term investment planning, instead of day trading.

How To Read The Bitcoin Rainbow Chart

The X-axis represents time, while the Y-axis represents Bitcoin’s price. The colored bands, which indicate market sentiment at particular BTC price levels, can help us make investing decisions like buy or sell, like this: 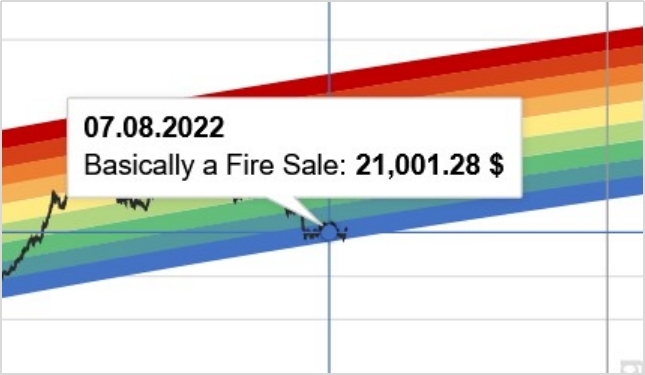 Here is a breakdown of what each color represents on the Bitcoin rainbow chart, and what to consider doing:

The Ethereum Rainbow Chart is developed by the creator of the Bitcoin rainbow chart, and can be retrieved from Blockchain Center as well. 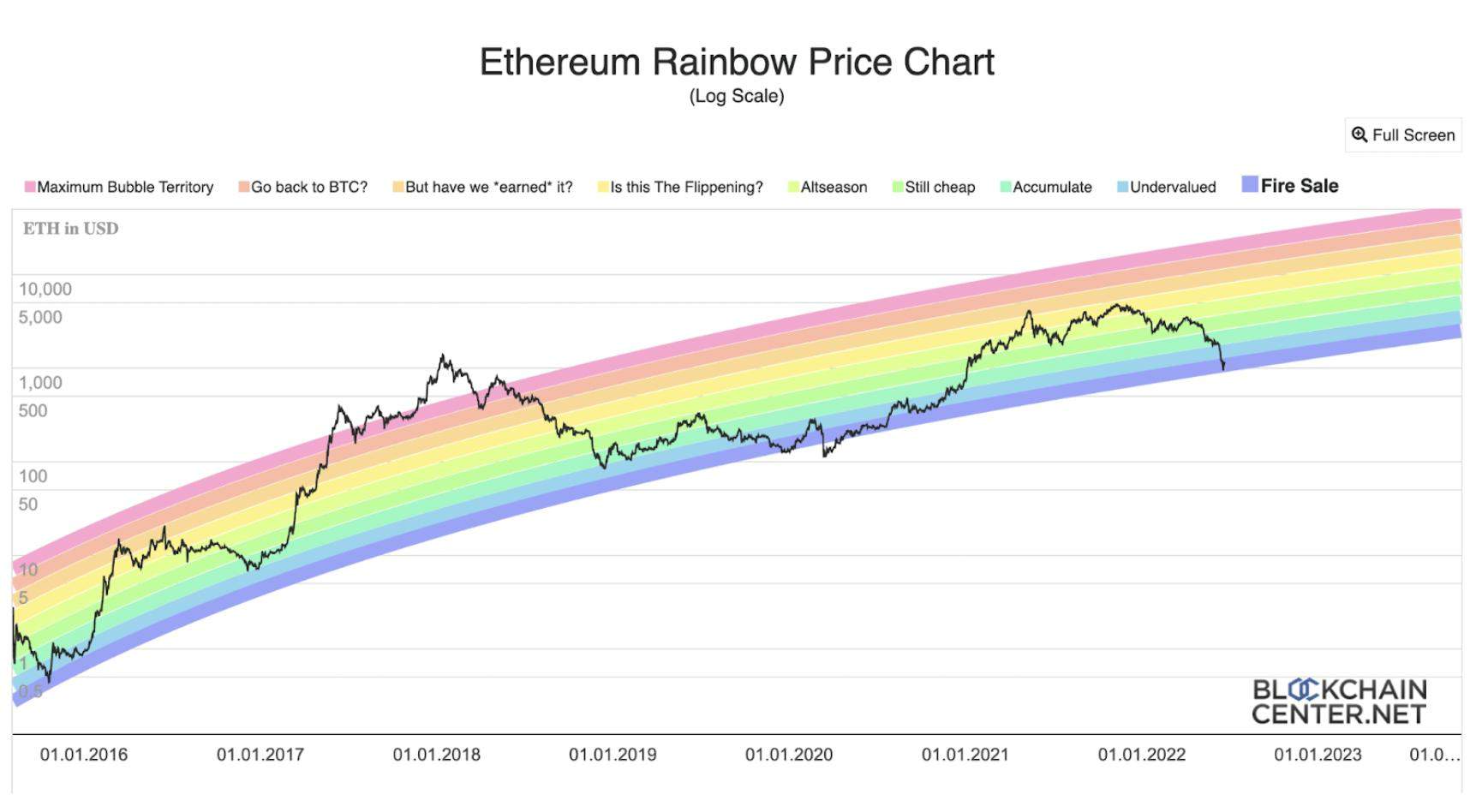 The color bands similarly denote how fairly valued the coin is at a particular price point,  in similar tongue-in-cheek fashion:

BTW, the Blockchain Center has other equally fun charts, such as this one below. 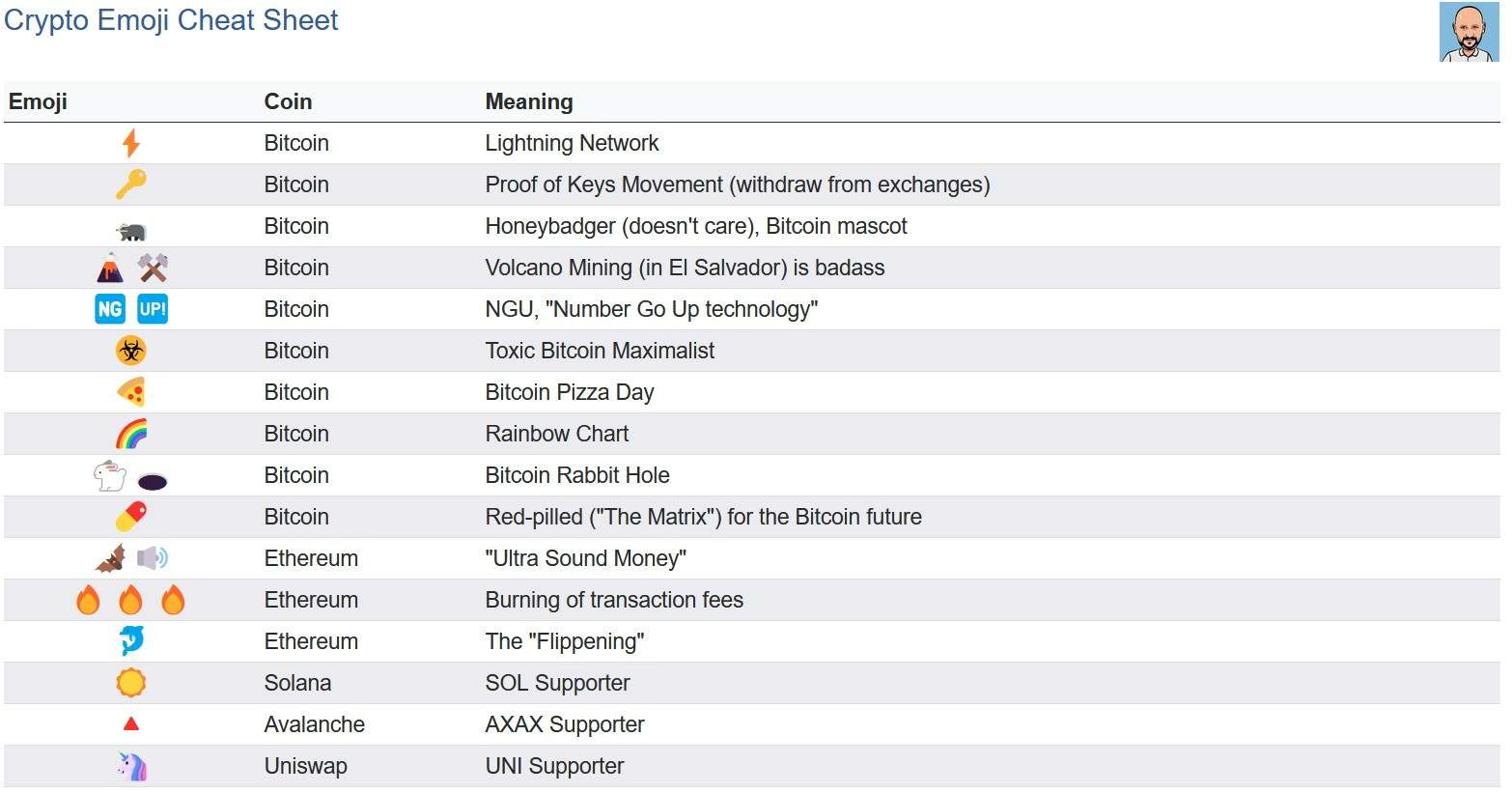 Is The Bitcoin Rainbow Chart Accurate?

The Bitcoin Rainbow Chart is a tool for visualizing the price action of Bitcoin over time. While it can give an idea of future price movements, it is not very effective for short-term predictions.

Having said this, it is accurate to a certain extent. In the most recent Bitcoin halving (or “halves”) on May 11, 2022, prices were adjusted to Dark Orange color band, indicating BTC was being overvalued and it was time to sell. Indeed, after that, Bitcoin prices went downhill from above $30,000 to sub-$20,000 from then on.

Who Invented the Bitcoin Rainbow Chart?

The original Bitcoin rainbow chart was created by Reddit user Azop in 2014 to track the price trend of Bitcoin. Due to its colourfulness and accuracy, people gave it the nickname “The Bitcoin Rainbow Chart”.

Just like most other projects involving Bitcoin, this chart is the product of voluntary group effort. Over time, it has been updated and improved by various people over the years.

Another user, trolololo introduced the basic logarithmic regression chart in 2014, the same year it was released. A third user, Über Holger, further developed it and uploaded it on Blockchain Center.

This means that it can take into account the exponential growth and spikes of Bitcoin, but while the color bands follow a logarithmic regression, they are otherwise arbitrary and without any scientific basis.

The stock-to-flow model is a forecasting tool for Bitcoin price. It measures the relationship between an asset’s available stock and its production rate.

According to the Bitcoin Stock-to-Flow model, the scarcity and price of Bitcoin are directly correlated, based on how a commodity’s shortage leads to lower supply, causing its price to rise.

The score on the right axis-y gives the forecasted price for Bitcoin at a particular time from the next halving.

As such, while both charts have a rainbow-y appearance, the stock-to-flow model differs from the Rainbow Chart in that it is based on the halving calendar, not so much on other market factors. 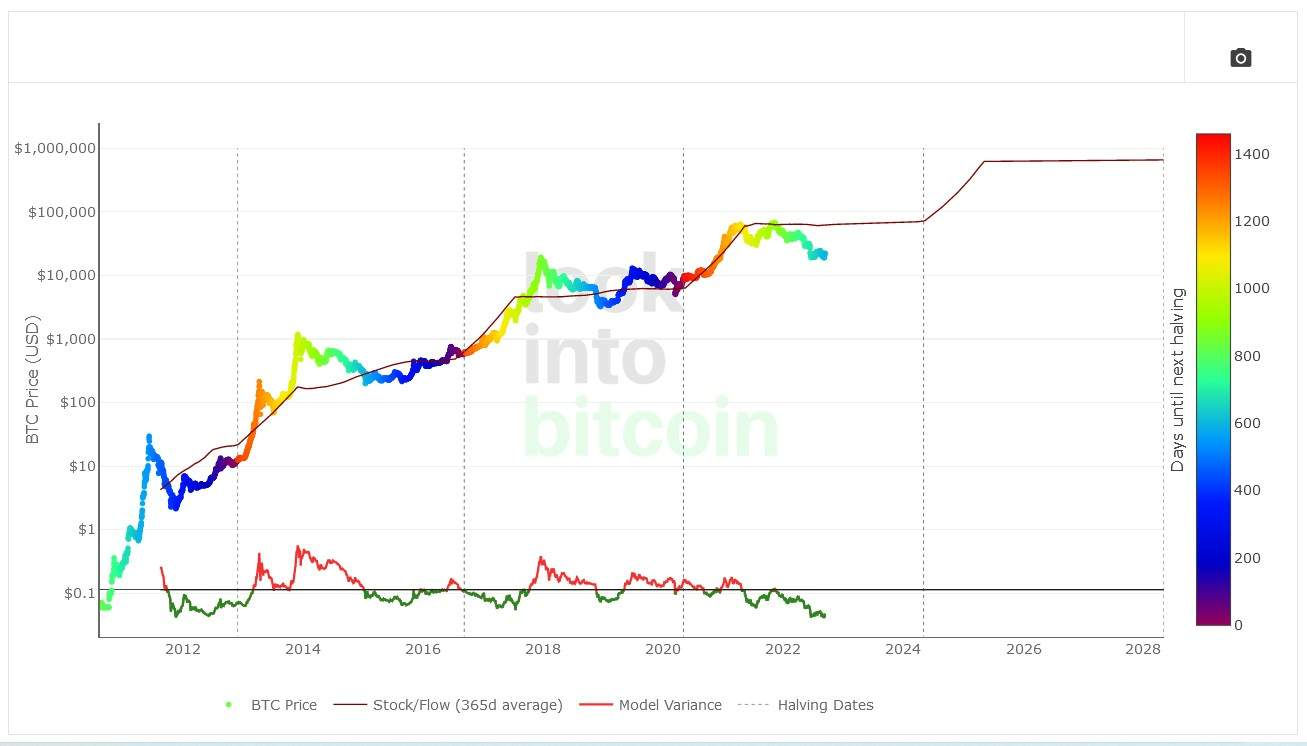 The Bitcoin Rainbow Chart is a great (and fun) supplement when used in conjunction with other technical indicators such as the Fear and Greed Index and RSI (relative strength index) indicator.