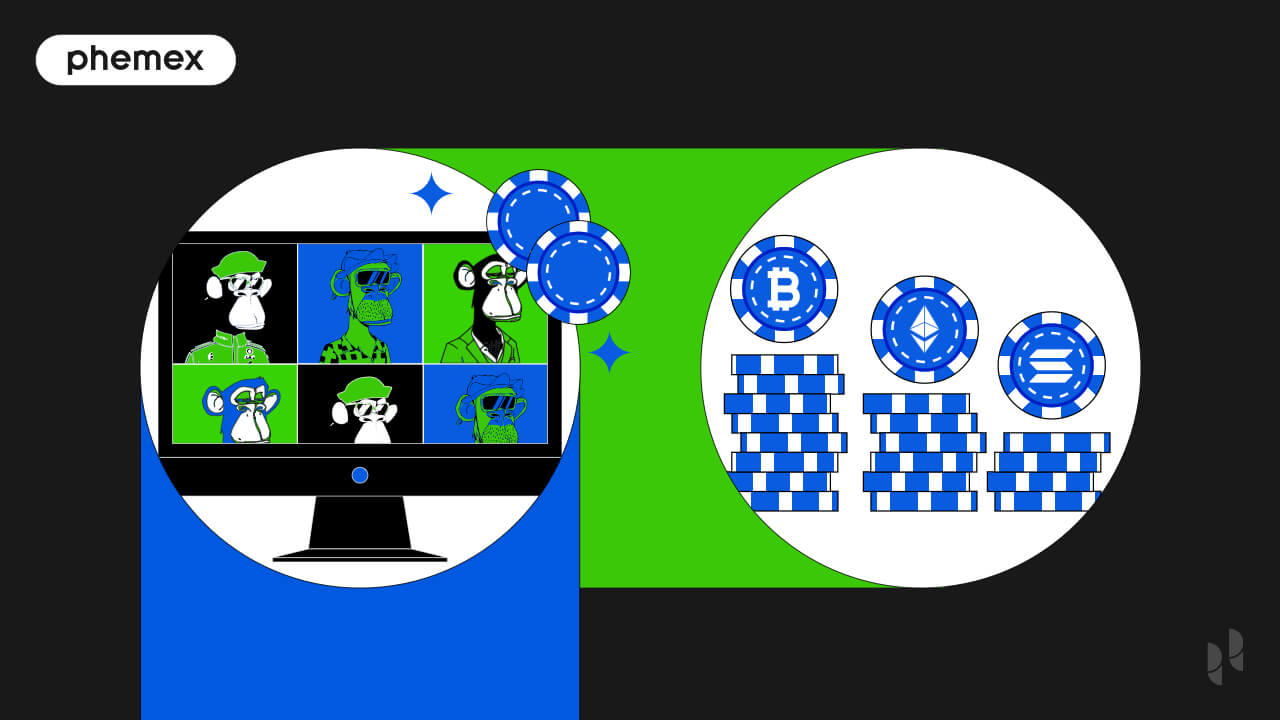 What Does Blue Chip Mean?

The term “blue chip” is borrowed from the stock markets used to describe companies that are considered as solid investments with a strong likelihood of holding their value and generating profits over the long term for investors, such as Microsoft, Coca-cola, IBM, Samsung, and of course, Apple. Blue chip assets are considered to be reasonably safe investment options due to an established history of good performance, and as such, are not likely to crash or go bust anytime soon.

What Is a Blue Chip NFT?

Similarly, blue chip non-fungible tokens are popular NFT projects that are expected to be stable and profitable and stable especially as long-term investing options, the way blue chip companies are. However, there is one key difference. Blue chip assets usually have a positive history that justifies people’s faith in them. Blue chip NFT projects do not have such a track record. This comes as no surprise since both NFTs and blockchain technology are still fairly new.

What Makes an NFT “blue chip”?

The factors that make an NFT collection “blue chip” are not definitive nor are they set in stone, but the following are common characteristics observed across most of such blue chip digital assets or digital art – a high floor price, a good trading volume, celebrity or influencer endorsements, as well as the below three key factors.

The popularity of the team or creator of the project

Most NFT projects are still very new and do not have a time-tested track record of profitability. So, investors turn to the popularity of the brand behind the project. The bigger and more popular the team/brand/creator of an NFT, the more likely the NFT is to reach blue chip status. After all, popular brands/people have more influence and are more likely to already have a fanbase.

For example, VeeFriends is an NFT project created by Gary Vaynerchuk, a successful entrepreneur and public figure with a huge social media following. When Vaynerchuk launched the VeeFriends collection in May 2021, it sold over $20 million worth of NFTs in weeks.

At the same time, not all popular NFT projects started out as blue chip picks in the NFT space. For some of these projects, the creators became popular after launching their collections; Doodles and Cool Cats are two standout examples.

Similarly, just because an NFT project starts out popular does not mean it will attain blue-chip status. Some projects might be riding on short-term hype alone and will crash once the hype dissipates. Worse, some are outright rug pulls, like the ice-cream themed Frosties project.

Most NFT projects will have a roadmap to show their community where the project is headed and the important milestones it must meet along the way. Projects that can execute the plans in their roadmap are perceived to be more grounded than those that cannot. Plainly put, the team’s ability to execute a roadmap is a sign of the creator/team’s commitment to deliver what has been promised. If the team behind the NFT has a record of setting and meeting deadlines, investors and users alike will have more faith in the project. The more faith a community has in a particular project, the more likely they are to invest in it.

Utility behind the NFT project

Some NFT projects have no function other than being a collector’s item. Many of these NFT projects rely on hype to appreciate in price, but if there is no utility or community backing it, that hype can die off pretty fast, taking the project along with it.

NFTs with real-world utility are NFTs that have other functions apart from being collectors’ items – for example those that grant exclusive rewards or event access to token holders. NFTs with strong real-world utility often put in a lot of effort to build thriving, active communities of users. This highly engaged user base is what gives an NFT project staying power beyond the hype, and elevates it to blue-chip status over time. Other NFT utilities include the use of a particular NFT in a game to complete a task or a mission.

CryptoPunks is a limited-edition NFT collection that was launched in 2017 by Larva Labs. The collection features ten thousand unique pixelated images of an alien’s headshot, each in a different get-up. CryptoPunks is one of the most popular NFT collections to date, with the most expensive CryptoPunk selling for $7.58 million. Current floor price? $149,587.

Another very popular blue chip NFT collection is the Bored Ape Yacht Club, launched in 2021 by Yuga Labs, a group of four independent artists and creators. Bored Ape Yacht Club is a collection of ten thousand apes, each decked out in unique outfits, wearing different expressions. Owning a Bored Ape NFT unlocks exclusive benefits like access to events and discord communities attended by the rich and famous, and it doesn’t stop there. The BAYC is getting its own metaverse called The Otherside, and BAYC NFT holders will presumably get first dips of the land parcels released.

This NFT collection boasts one of the best examples of real-world utility in action. Built on the back of a well-articulated mission of increasing female representation in the world of NFT art, the World of Women collection features 10,000 unique female portraits, the most expensive of which sold for 260 ETH ($615.9K at the time). However, it has also latched on to the star power of Hollywood actresses Reese Witherspoon and Eva Longoria to help it spread the word about gender inclusivity. NFT holders get periodic free art airdrops from up-and-coming artists around the world, members-only discounts, pre-sales access and mint passes. But it’s not just about what members get; it’s the chance to give back that has garnered it praise in the NFT community. WoW has till date donated over $250K from the collection’s royalties to women-focused non-profits globally.

At the end of the day, blue chip NFTs, with their eye-wateringly expensive price tags, are a cut above the typical NFTs in that they serve as a status symbol and have a higher likelihood of providing a positive ROI for investors. Like other blue chip assets, blue chip NFTs give people enough confidence to invest in them. But while traditional blue-chip assets usually have a long history of good performance which is then used as the predictor of long-term success,  what makes an NFT “blue-chip” is more an elusive mix of brand name and exclusivity that cannot be tangibly defined–at least for now.