Satoshi vs. Bitcoin (Smallest Bitcoin Unit): How to Calculate Satoshis? 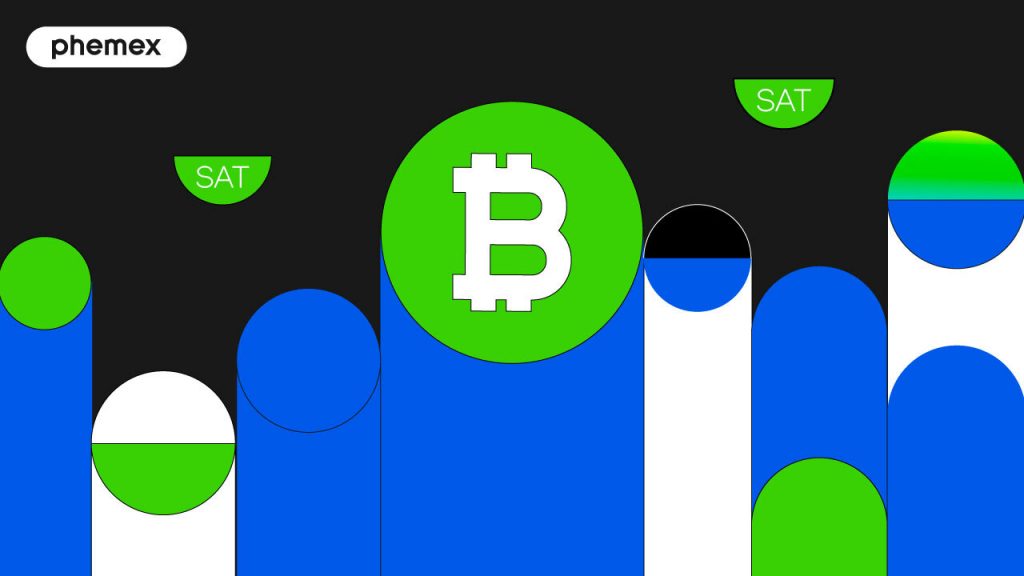 A person needs to own only 0.28 BTC or 28,000,000 SATs ($12,000) to be statistically among the top 1% of Bitcoin holders. When Bitcoin becomes more expensive, measurement units that divide Bitcoin such as SATs will be used more frequently. SATs are currently used to measure transaction fees and the performance of altcoins compared to Bitcoin.

Satoshis are referred to as “SATs” in the crypto community. There is currently no symbol for SATs. We at Phemex have developed a chart to help you determine how many SATs you own based on your Bitcoin holdings:

Satoshis are named after Bitcoin’s founder Satoshi Nakamoto. Satoshi developed the first Bitcoin software and deployed the whitepaper called “Bitcoin: A Peer-To-Peer Electronic Cash System” in 2008. He was inspired by the global financial crash of 2008 and wanted to develop a new payment system that is decentralized and deflationary.

Inside the Bitcoin whitepaper, Satoshi laid out the division of Bitcoin in decimals and Satoshis. He made Bitcoin progressively harder to mine and limited the supply to 21,000,000 coins.

Satoshi was actively engaging with the early crypto community at Bitcointalk.org while the Bitcoin blockchain was being developed. His last log-in at the forum was on December 13, 2010.

His personality has not been identified, and none of the wallets that were used by him in the early days of Bitcoin have been moved. In the Genesis block (first BTC block), he coded the following message: “The Times 03/Jan/2009 Chancellor on brink of second bailout for banks.”

The first block mined 50 BTC or the equivalent of 500,000,000 SATs. It cited an article by “The Times,” a British newspaper. Satoshi was critical of the way central banks can print fiat currencies and this is part of the reason he limited the total supply of Bitcoin.

Satoshi Nakamoto only used “BTC” and “Satoshi” as official Bitcoin measurement units while he was developing Bitcoin. The most important update since his disappearance was the 2015 ISO 4217 update, in which Bitcoin was included and assigned different measurement units. The following ISO-approved units can be used to measure Bitcoin:

New measurement units such as μBTC and mBTC are unlikely to be used as often as SATs. As the price of Bitcoin increases, large quantities of Bitcoin remain out of reach for the bigger part of the world population. If the price of Bitcoin reaches $1 million, SATs will be more convenient for average people since they divide Bitcoin by 100 million and MicroBitcoins only divide it by 1 million.

There is no symbol for Satoshis and most crypto websites simply write “SATs.” Bitcoin’s symbol “₿” is highly popular and first used by Satoshi Nakamoto back in 2009 when he was discussing Bitcoin on forums. The Bitcoin symbol is synonymous with crypto, but the community hasn’t reached an agreement as to the official symbol for SATs.

All crypto prices can be converted to SATs by calculating the price of Bitcoin in that currency and then converting them back to SATs. This can include values such as the current price of the crypto, market cap, trading volume, and others. The following is an example of Ether’s current market value in SATs: 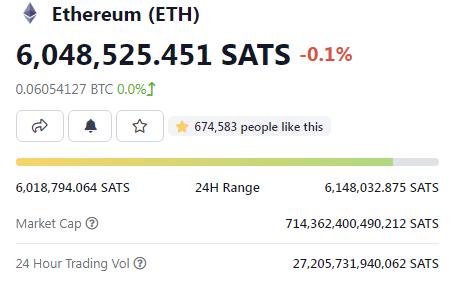 The current value of 1 ETH is 6,000,000 SATs. Notice how the market cap of Ethereum was automatically calculated in SATs. If we convert the SATs back to USD, then match them to the original USD value of Ethereum, the numbers will be equal.

Why Are Satoshis Needed?

If you want to send Bitcoin to another wallet on the Bitcoin blockchain, the transaction has to be verified by a miner. Miners use advanced ASIC miners that consume a lot of energy to solve mathematical cryptography problems, in order to validate transactions. The miners receive a reward in Bitcoin for each block.

If the network is congested, the fees are increased or the transaction is delayed. For reference, Bitcoin transactions hit a record-breaking fee average of $58 in August 2021.

The Bitcoin blockchain does not use BTC decimals but it uses SATs before it converts them for display for both miners and users. The Bitcoin source code, openly available on GitHub, always uses SATs when it specifies an amount of Bitcoin for the blockchain.

When you send a Bitcoin transaction on an exchange like Phemex, you only see the fee in BTC (i.e., 0.0005 BTC per transaction). Bitcoin miners only take Satoshis as payment and these are abbreviated as vByte/SATs.

Withdrawal fees at Phemex for most popular cryptos.

The calculations vary based on the congestion rate and the size of the transaction. Most wallets calculate the transaction in bytes, multiply it by the average byte size on the Bitcoin network, read an answer in SATs, divide it by 100 million, retrieve the SAT amount in Bitcoin, and convert that to USD.

Most Bitcoin wallets also come with fee calculators that can calculate the average fee based on the current state of the network. It’s possible to adjust the fee and pay less, but you risk waiting a long time for your transaction to be validated. The amount of Bitcoin you send has no bearing on the average fee. Someone recently moved $1 billion for a total fee of $0.78.

In the future, Satoshi units will likely be used to calculate the value of items for small Bitcoin payments. For example, if we were to price an item such as pizza at the supermarket, “10,000 SATs” would be easier to parse than “0.0001 BTC.”

To summarize, Satoshis are used to cover miner fees on the Bitcoin network and network fees are based on the energy consumption of the network. Satoshis are also used to measure the performance of altcoins compared to Bitcoin.

Many professional crypto traders prefer to take profits in Bitcoin and continue accumulating SATs. For example, if a trader makes a $1,000 profit on an Ethereum trade, they can market-sell their ETH balance on the ETH/USDT pair on Phemex and use their USDT to buy BTC.

Taking profits in SATs is a symbolic way the crypto community uses to avoid dealing with fiat currencies such as USD and EUR. The main advantage is that Bitcoin is a store of value with a limited supply while fiat currencies can be printed indefinitely by central banks. This safeguards your investment from inflation.