Abracadabra, Is That How You SPELL Success: What is Magic Internet Money?

Stablecoins are an interesting concept in cryptocurrency. A coin or token is considered “stable” when its value is backed by a secondary reserve asset, like gold or the US dollar. This allows the company that issues the coin to assuage fears of inflation, reducing volatility, and permitting investors to trade securely. One such company is Abracadabra Money, which uses a few different tokens on its budding platform. These include the stablecoin known as Magic Internet Money (MIM), which is backed by the US dollar, and SPELL, Abracadabra’s other native token. 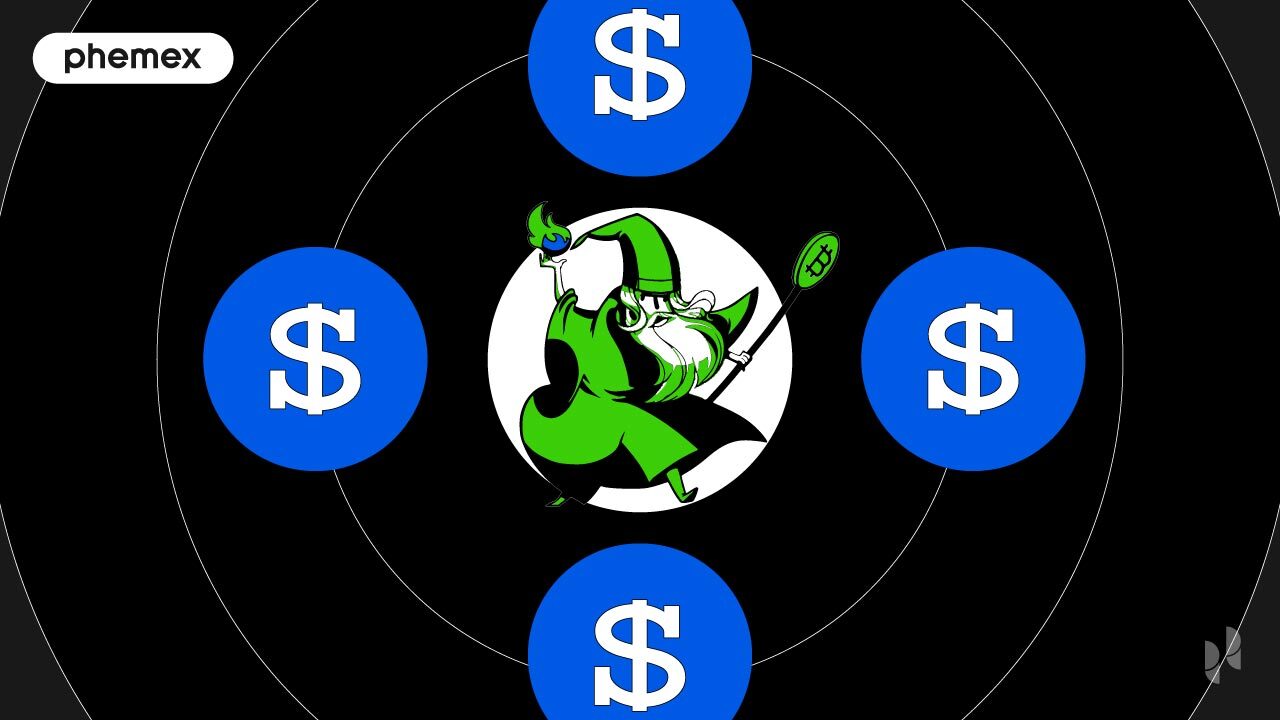 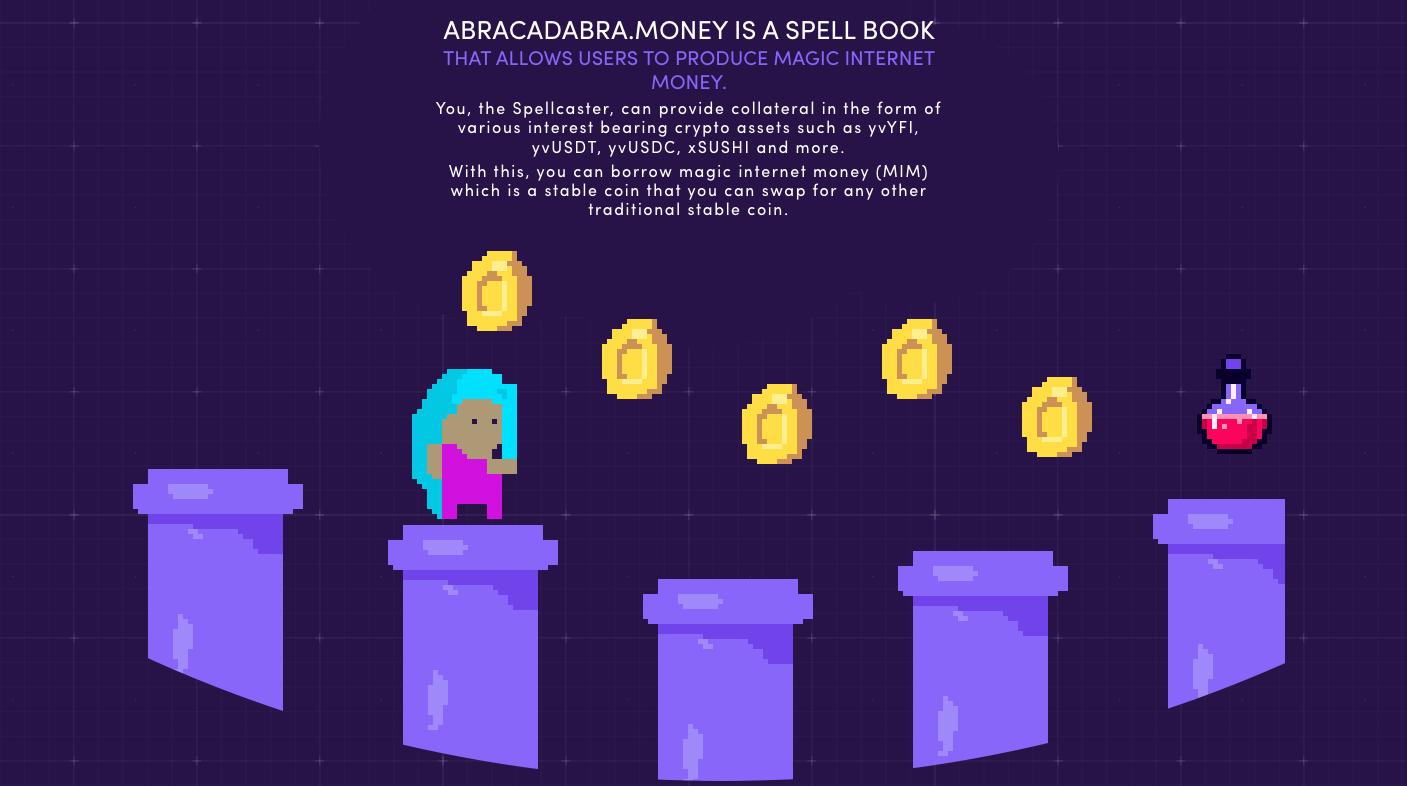 What Is Abracadabra Money?

Abracadabra Money, referred to hereafter as Abracadabra, is a decentralized finance (DeFi) lending platform with plans to help digital investment move into the future. Abracadabra is built upon a number of commonly referenced cryptocurrency concepts, including but not limited to: 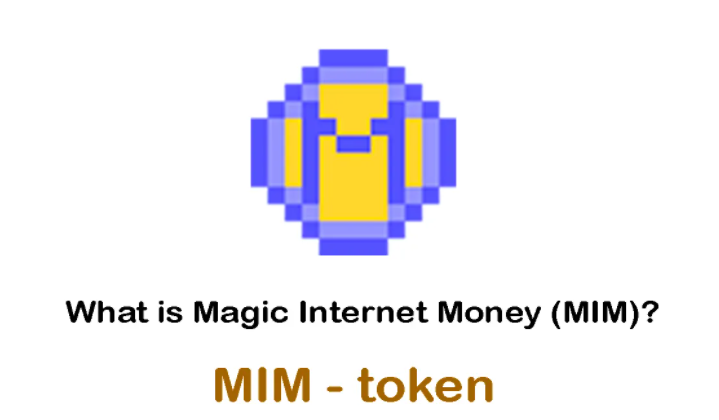 Abracadabra allows its users to pledge other cryptocurrencies as collateral, giving them a supply of its own stablecoin in exchange, which is called Magic Internet Money (MIM). These are given out in the form of loans, as MIM must eventually be returned to the company, or the borrower will incur penalties. Here are the two possible courses of action for a loan taken out in MIM:

MIM can be exchanged for other stablecoins, or traded for cryptocurrencies on platforms where it is accepted. Abracadabra recognized that its users would want to be able to borrow against their funds tied up in other passive income crypto schemes – of which there are many. In addition, other users would be more than likely to want to contribute to the lending pool, provided they earn some form of passive income as compensation. This concept, called yield farming, usually comes in one of two forms:

Abracadabra turned these two more conventional approaches into a business model of their own design. By combining the two methods mentioned above, even though at first glance that may seem all but impossible, Abracadabra created a unique system. The company allows users to contribute already illiquid assets in return for liquid assets, the stablecoin MIM. This innovation has allowed Abracadabra to provide other platform users, who have already locked up their funds in yield farming schemes, to still use their contributed tokens. Although often with slightly limited functionality, as MIM is often accepted on fewer platforms than other, less rare forms of cryptocurrency. 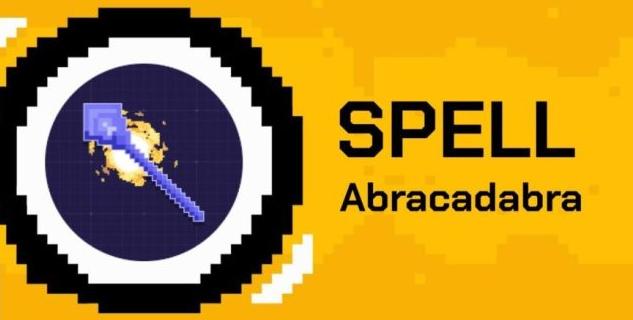 What Is SPELL Token, the Other Abracadabra Token?

SPELL, the second major token issued by Abracadabra, is based upon the Ethereum blockchain. Though much higher in quantity than MIM, these coins are actually found less commonly in circulation. This is because they are largely used as a form of governance token on Abracadabra’s own platform. Governance tokens give holders the option to either vote themselves, or delegate their votes, regarding changes on the issuing platform’s upgrades. This essentially means they become a form of stakeholder, and just as with normal stake holding; the more capital they pledge, the greater their say in proposed changes to that platform’s format.

SPELL tokens also allow their holders an option to earn passive income, by staking the actual tokens themselves as well. As you might expect from reading the section above, SPELL contributors are given MIM in exchange for their contributed tokens, which can also be used themselves (at risk of losing their SPELL). SPELL contributors also earn periodically from trading fees made on Abracadabra’s platform when they stake SPELL. These earnings are distributed via a third, much more minor token on the abracadabra platform, called sSPELL.

The all-time price chart for MIM over its short, eventful lifespan barely looks real. The Magic Internet Money token’s price may have started out low, but as it became properly backed by the US dollar, it shot upward. Starting out at an almost infinitesimally low $0.000005 when it was first minted, MIM predictably rose to an almost 1:1 ratio by October 2021, when it was properly released to the public. 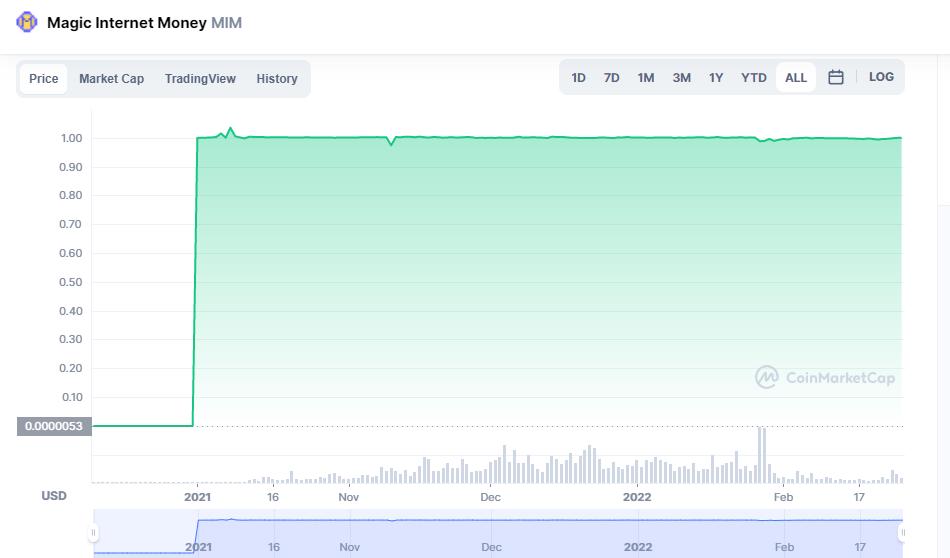 However, when we look at MIM’s performance over the last three months, we get a much more telling and interesting picture of what the token’s price has been able to achieve. As a stablecoin, the price of MIM should not fluctuate much whatsoever, so any small movements give telling insights into activity on the platform. Generally speaking, up and down spikes in MIM’s price denote changes in supply and demand. Upward spikes above a 1:1 ratio usually indicate there is an inflated supply-to-demand ratio, whereas a downward spike would generally suggest the exact opposite. In MIM’s case, there have been several times when the supply has gone over the demand, which is a slight cause for concern – if nothing major. 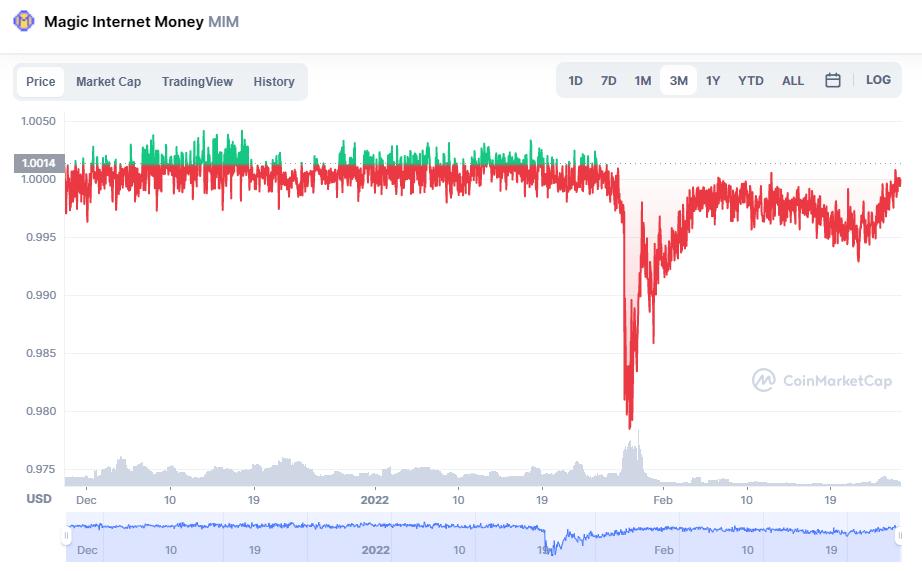 What Is The Future for MIM?

While MIM’s trajectory make look slightly concerning to some, it’s important to remember that this currency is still relatively young. It has also started out its life during a period of extreme uncertainty for the crypto market as a whole, even for stablecoins. The simple fact that it has endured with as few hiccups as it has, speaks volumes to the emerging tokens durability and stability. Whether it will continue to last, however, only time will tell.

The famous Bitcoin meme that spawned the birth of Abracadabra and MIM (source: Rhythmofbitcoin)

Who Is Behind Abracadabra and the Magic Internet Money Token?

The image above first appeared on the social media site Reddit, trying to entice users to learn more about the new sensation “Bitcoin” with the slogan “Magic Internet Money – join us.” This provided the inspiration for the naming of MIM, which was anonymously co-founded by an internet-user codenamed “Squirrel” sometime in 2021. This co-founder was motivated to create a fully decentralized stablecoin, and decided to help form a platform that functioned over multiple blockchains. By October 2021, that platform was up and running, and had released its first fully marketable stablecoin – the MIM token.

There is a lot of uncertainty surrounding MIM, and its founders Abracadabra Money. While both the concept and implementation of Abracadabra, its system, and its tokens look solid enough at first glance, it’s clear that there is still work to be done. A stablecoin’s foundations should also be stable themselves, and at present time relatively little is known about Abracadabra’s founders, or their intentions. However, with all that being said, both have seen a remarkable start to their lives, and have quickly nestled their concepts into the collective imagination of the crypto community as a whole. So, is MIM simply casting a SPELL over its users, and eventually cursed to fail, or just beginning its magical ascent? Again, only time will tell.