The Money Printer Goes ‘Brrr’ meme refers to a video that shows the US Fed Chairman, Jerome Powell, shooting cash from a money printer. Although light-hearted, the meme stirs the serious, gripping concern of inflation. The video mocks the trend of Quantitative Easing (QE) in the United States. QE refers to the steps the Federal Reserve takes to increase the aggregate money supply in the economy.

An increase in money supply leads to inflation. So when the money printer goes brrr, inflation rises. This is evident from the US inflation figures that breached 9.1% in June 2022, the highest in three decades. 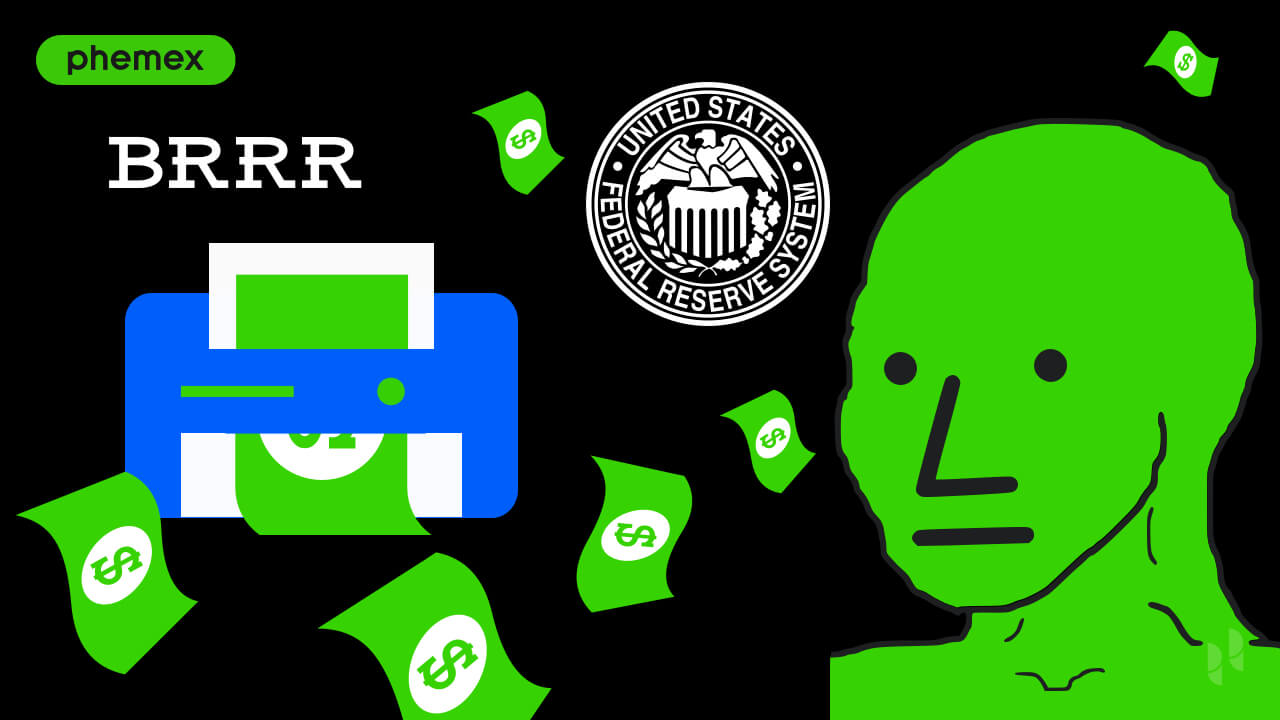 What is Quantitative Easing?

Quantitative Easing (QE) refers to the monetary policies the Central Bank undertakes to increase the money supply in the country. QE is definitely not as simple as “haha, go brrr”! The Federal Reserve undertakes QE through bond purchases from commercial banks. Let’s see how it works:

Why Is Money Printed?

Why Did The Money Printer Go Brrr?

Before understanding the reasons behind QE, this chart by Trading View gives us an insight into the recent trend in Fed rates:

Somewhere between 2019 and 2020, the Federal Reserve started reducing interest rates. This continued at a decent pace until March 2020, when the Fed decided to rip the tape and reduce it from 1.75% to 0.25% in one shot.

On March 15, 2020, the Federal Reserve announced they would purchase $700 billion worth of government debt bonds and mortgage-backed securities from domestic financial institutions over the coming months.

The reason behind this move was the massive decline in economic activity because of COVID. The rationale was that giving more money to people would keep the consumer and investment demand intact, cushioning the impact of COVID – and it worked.

After a massive intra-day fall, the momentary hiccup subsided soon and to put it mildly, the markets went berserk. The above image is the historical NASDAQ market trend, and cryptocurrency prices moved just as wildly. Bitcoin surged from ~$5,000 to ~$69,000, while alts like Ethereum went on an absolute tear from under $200 in March 2020 to $4,500 by November 2021.

While the excess money brought glory to financial markets, it also damaged the economy. When money supply increases, not only do stock prices rise (investment demand), but so do the prices of our daily goods and services (because of consumer demand). More money in people’s hands creates a case of “too much money, chasing too few goods”, thus, bidding up prices.

Unlike financial markets that attain equilibrium prices asap, the goods and services have market inefficiencies, and price rises may not always reflect in real-time. The price soars over time, which is now reflected in the inflation numbers.

Inflation is often regarded as an ‘inhuman tax’ because it disproportionately affects the middle and lower class. For example, a 5% increase in car prices is bad, but a 5% increase in food and gas prices can pinch the pockets of these households.

Ever since alarming inflation projections started making the rounds in policy and media circles, the Fed has committed itself to reversing the trend quite aggressively. In a matter of months, interest rates are back to pre-pandemic levels (see first chart). Authorities hope that high-interest rates will spook banks and investors, reducing economic demand and cooling inflation overall.

Good News For The Economy

However, the world’s economy is experiencing something unlike ever before. Despite aggressive rate hikes, demand appears buoyant. Employment is rising, and unfilled jobs are at an all-time high. This indicates that businesses are not backing down, meaning they either must have healthy demand for their goods and services, or have interpreted the market incorrectly.

Whether the economy will manage to land softly, or inflation continues to rise as stock prices plummet, these are questions that everyone is looking for answers to, but nobody can definitively know.

The money printer will almost certainly continue to go brrr, but only time will be able to show us whether or not our markets and economies can adapt to and accommodate it.