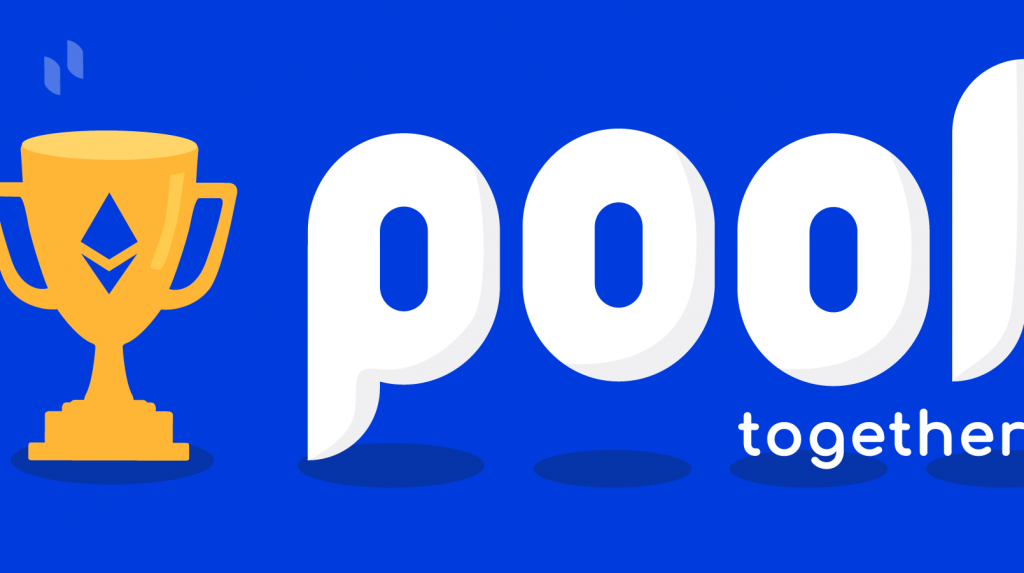 PoolTogether is a deceptively simple DeFi app that incentivizes users to deposit funds with the opportunity to win prizes. It’s described as a “no loss lottery” because it distributes prizes in a similar random way to a lottery. However, usually, if you don’t win the lottery, you’ve also lost the cost of your ticket. With PoolTogether, you hold on to your initial stake, meaning that there are zero costs to taking part.

Like many DeFi projects, PoolTogether has its roots in traditional finance. The project takes inspiration from the concept of prize-linked savings accounts, which are designed to incentivize people to save money. PoolTogether has received backing from ConsenSys, Robot Ventures, and DTC Capital, among others.

Free prizes, with no costs. Doesn’t that sound too good to be true? PoolTogether effectively harnesses the benefits of pooling users staked funds to generate yields on DeFi applications, which funds the prizes. So there really is no catch. Here’s how it works.

PoolTogether is an Ethereum-based application that uses smart contracts to manage its prize pools. There are two types of prize pools: those set up by the PoolTogether project and community prize pools that anyone can set up.

There are four main prize pools, which allow users to deposit either USDC, DAI, UNI, or COMP tokens. Each token deposited represents one ticket. The pool’s total value represents all the user funds deposited into that pool for that weekly draw, and there’s no upper limit on the number of tickets a player can buy.

Each pool is a smart contract, and once a week, it sends all deposited funds into lending pools on Compound Finance, where they earn interest. At the end of the week, a random number generator selects the winners, who receive all the interest earned by the pool during the week, and their tickets back. Unless the user chooses to withdraw their winnings, they’re automatically converted to tickets and entered into the next draw. In this way, users who never withdraw their winnings will keep increasing their chances of winning again with more tickets. Everyone else gets their original stake back, and the game resets for the next weekly round. If a user doesn’t withdraw their tickets, they simply get entered into the next weekly draw.

Community pools are open for anyone to set up. They have three core features in common with the main PoolTogether prize pools, in that users won’t lose funds, they can withdraw funds at any time, and there’s a chance to win prizes. However, when someone sets up a Community Prize Pool, they have the flexibility to choose which token users can deposit, where the yield is generated, and how the prizes are distributed.

It’s worth noting that Community Pool builders don’t have any access to staked funds. They simply determine the terms of how the pool operates.

Although a user can withdraw their stake at any time, the PoolTogether protocol does enforce an early withdrawal penalty to prevent people from depositing right before a draw and withdrawing right after. If someone deposits and immediately withdraws, then they’re automatically charged a penalty which is put towards the next draw.

The penalty decreases over time and generally reduces to zero once two times the prize period’s length has been reached. So for a weekly draw, a user would have to leave their funds deposited for two weeks to avoid the early withdrawal penalty. However, it’s worth noting that for Community Prize Pools, the pool builder can configure the penalty to apply for up to four times the prize period.

How to Use PoolTogether

Compared to many competitor DeFi apps, PoolTogether has a clean and user-friendly interface. To use it, you’ll need either a Metamask wallet or another supported Ethereum wallet that holds enough of the funds you want to stake. Go to the app page and choose the pool you’d like to play. 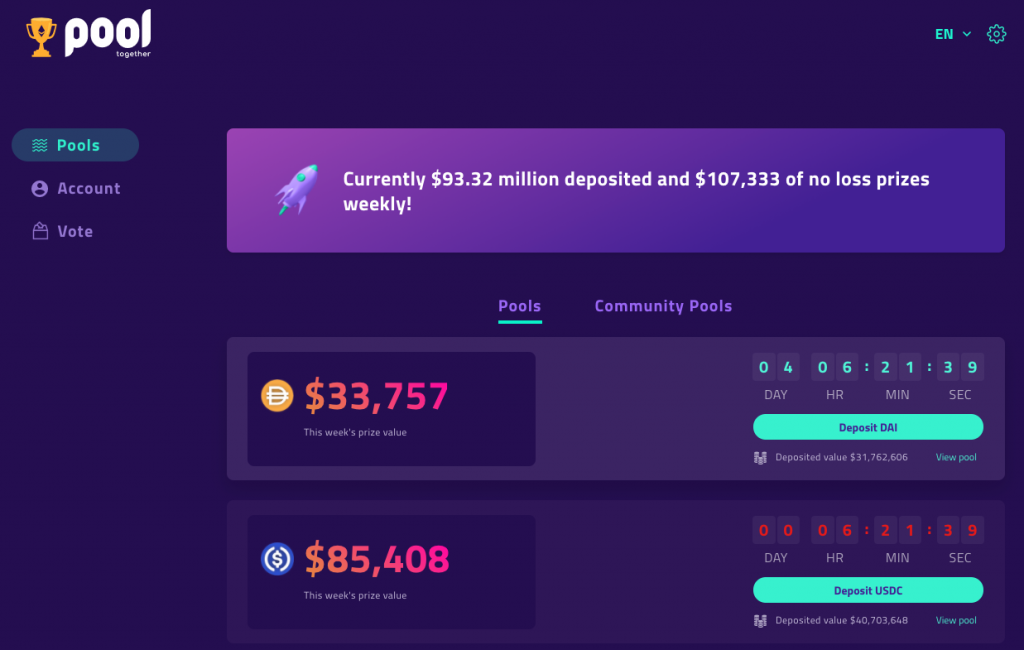 Selecting a pool shows you more information about the pool, including prizes on offer, the time remaining to the next draw, and historical payouts.

Click the “Deposit” button at the top of the pool page and choose how much you want to stake. The display will show you your odds of winning. 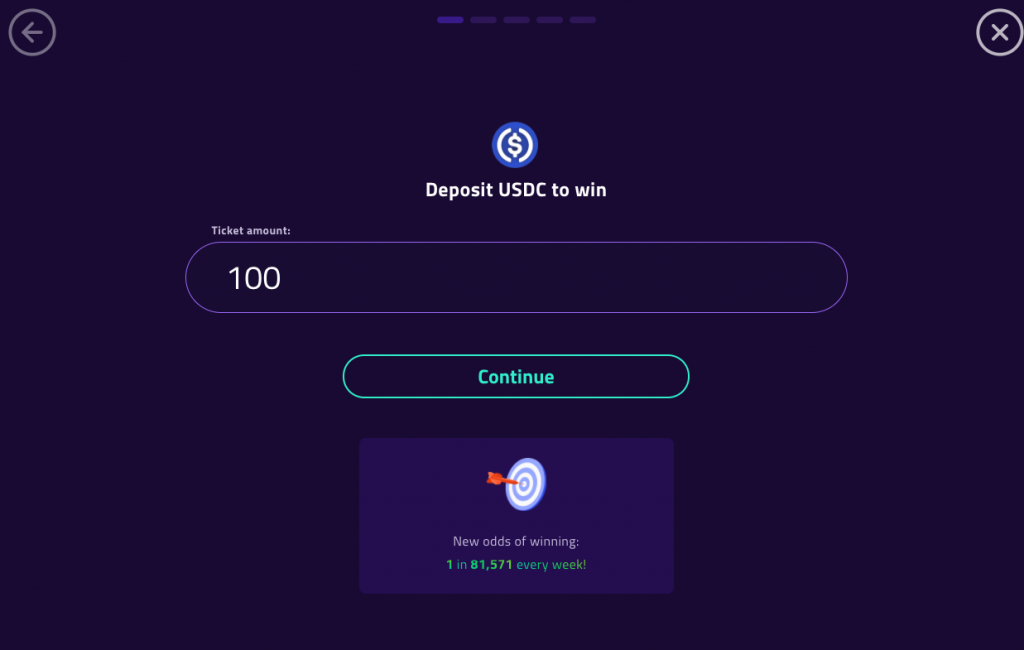 As you can see, the odds improve with a bigger stake. 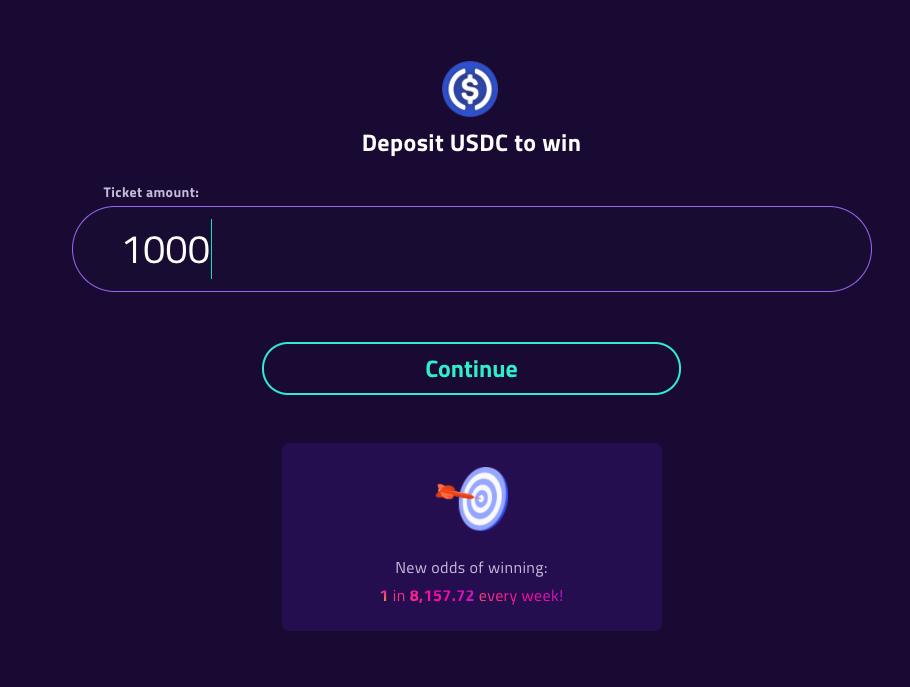 When you click “Continue,” then you’ll be prompted to connect your Ethereum wallet. Below is the list of supported wallets. 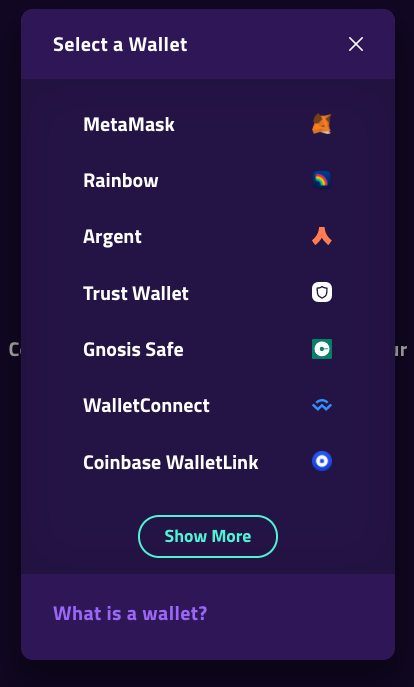 And that’s it! As soon as your transaction is confirmed, you’re entered for the next draw.

What are the POOL Tokens?

42% of POOL tokens have already been distributed to various stakeholders, including the team, initial investors, and depositors. The remaining tokens are locked in a Treasury, and their distribution will be determined by community governance.

Unlike many DeFi applications, PoolTogether is very beginner-friendly. It has an easy-to-use interface and doesn’t require any knowledge of financial instruments or markets. Users can simply stake their funds and leave them in the protocol in the hopes of winning a prize. The odds of winning are also significantly better than most state lotteries, even with a small initial stake.

Perhaps the only criticism of the app is that those who’ve already won big and left their funds in the protocol stand the best chance of winning again, centralizing the wealth into a smaller number of participants. In that respect, those staking smaller amounts may be better off depositing their funds in a yield-generating DeFi app. However, the random number generator means that anyone stands a chance of winning on PoolTogether, even if their stake is small.

PoolTogether has been through several smart contract audits. However, like all DeFi apps, there is still some risk. Always do your research before investing your funds.

← What is Sybil attack: How Blockchains Prevent Sybil Attacks
What is High-Frequency Trading and How does HFT work? →
About