What is a Bitcoin ETF?

In the world of investments, cryptocurrencies and ETFs are at opposite ends of the spectrum. Bitcoin is an unregulated, decentralized digital asset that more often than not garners institutional skepticism, while ETFs (exchange-traded funds) are diverse investment vehicles and are a cherished favorite of fund managers and investment advisors across the world. 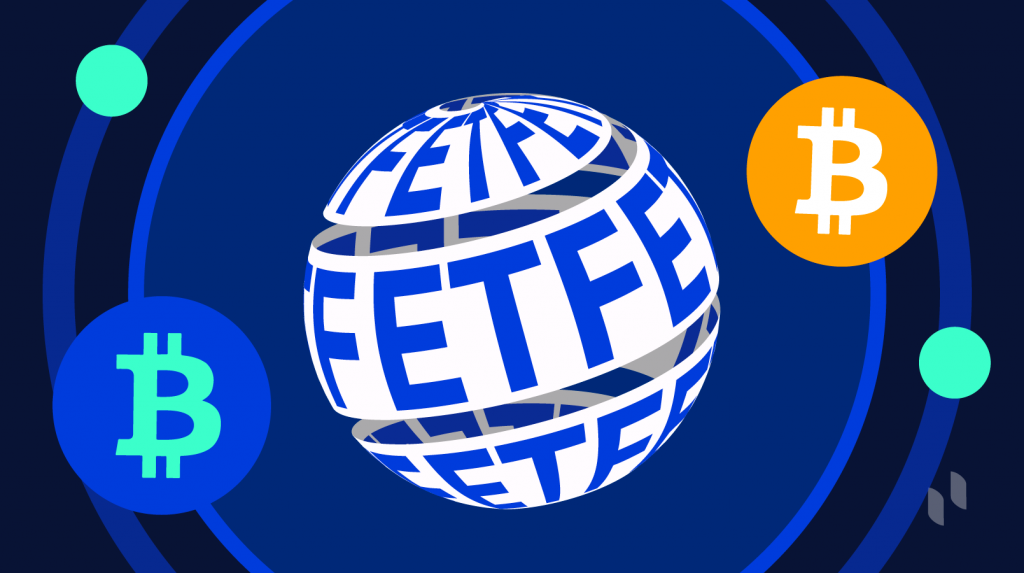 For investors focused primarily on gains, ETFs offer a simple, convenient alternative to trading individual assets. Since they represent a basket of underlying financial assets, they’re also a great way for traders to diversify their portfolios and manage risk.

Bitcoin is at its all-time high, and the innovative leaps in DeFi technology over the last few years have every financial institution’s Spidey senses tingling. However, the blockchain industry is no stranger to moody markets, and if there’s one thing that gets hedge fund managers nervous, it’s volatility risk. Cryptocurrencies are infamously volatile, and while this does open opportunities for profit margins that are unheard of in traditional markets, it can also lead to crippling financial losses.

Bitcoin prides itself in its lack of a trusted intermediary, but despite having a market capitalization of nearly $1.2 trillion, the world’s first cryptocurrency is still largely unregulated. The current regulatory atmosphere for blockchain-based tokens is, in a word, uncertain – not the ideal environment to attract institutional investors. With millions, and perhaps even billions of dollars to invest, large funds are probably reasonable in not fully trusting a distributed network of strangers.

What is a Bitcoin ETF?

Though the situation seems dire, the sheer profit potential on display over the last year has institutions begging for a less risky way in, and a Bitcoin ETF might just be the answer. An ETF allows investors to diversify their investments without actually owning the underlying assets, meaning they can profit from Bitcoin’s price movements without owning any BTC.

Benefits of a Bitcoin ETF

A Bitcoin ETF would track the value of BTC, enabling investors to enter the realm of cryptocurrencies without going through the process of buying their tokens and storing them. Taking secure custody of your Bitcoin is a complex and sometimes expensive ordeal, but an ETF could completely eradicate this problem.

The United States Securities and Exchange Commission (SEC) is hesitant to allow an ETF focused on such an untested asset class. However, other regulators around the world have actually seen success approving a Bitcoin ETF.

But this raises the question of why people wouldn’t rather invest in Bitcoin directly. Since exchange-traded funds generally track the price of their underlying assets very closely, when the price of Bitcoin falls, so too would the ETF. However, the removed cost of custody and greater convenience aren’t its only advantages.

Another crucial benefit would be investors’ ability to short sell the ETF in fear of a price drop, a feature that isn’t possible in regular cryptocurrency markets. They are also much better understood across the financial industry, and as digital assets like Bitcoin become increasingly attractive, creating simpler investment routes is in the industry’s best interests.

The demand For a Bitcoin ETF Has Never Been Higher

Some argue that a Bitcoin ETF is unnecessary in today’s financial environment. But regardless of its benefits, limitations, or potential impact on global economies, the demand for a Bitcoin ETF has never been higher. According to a study from Gemini in 2021, less than 8% of investors above the age of 55 were invested in digital assets — a meager fraction compared to the nearly 28% of millennials that hold cryptocurrencies.

Bitcoin is a monetary revolution, but it does have a learning curve and a steep one at that. Wallet addresses, seed phrases, and private keys are a lot to think about when you’re used to a certain way of dealing with money, and older investors just aren’t tech-savvy enough to learn new tricks. Additionally, Gemini also found that IT and telecom industries were the top career choices for cryptocurrency investors, further cementing the link between investment likelihood and tech-savviness.

Access to a Bitcoin ETF on large stock exchanges would significantly lower the barrier to entry for cryptocurrency investments and allow a broader demographic to enter the space. As more money enters the cryptocurrency ecosystem, Bitcoin and other digital assets could further safeguard their place as more standard investments.

According to a survey report from Bitwise Investments last year, advisors cited ‘better regulation’ as the most significant factor that would make them more comfortable investing in cryptocurrencies. 54% of the advisors surveyed agreed with this sentiment, 4% higher than the year before. Market commentators have long claimed that Bitcoin’s volatility and lack of an ETF are the most significant hindrances to enterprise adoption, but the real problem lies at the regulatory level.

That being said, the ‘launch of an ETF’ would have a substantial number of investors ready to inject funds, picked as the most significant factor by a considerable 37% of surveyed advisors. Exchange-traded funds offer an array of benefits such as quick diversification, greater liquidity, higher tax efficiency, and the ability to purchase expensive stocks in small amounts.

ETFs also lower costs since they allow investors to purchase a diversified portfolio for the same low commission as a stock. Additionally, compared to mutual funds, ETFs generally have lower expense ratios. There are hundreds of ETFs currently trading on stock exchanges in the United States, spanning various indices, sectors, industries, and market capitalizations.

ETFs are also classified into assets from specific countries, and there are even exotic ones like commodities, bear funds, and leveraged funds. Since they trade on market exchanges, they can be traded whenever stocks can, and not just at the end of the day like with mutual funds. This is especially advantageous for underlying assets that have relatively high volatility – like Bitcoin.

ETFs are usually not managed actively and are instead programmed to chase a specific index. This means they may not have high capital gains or income to give owners every year, giving investors more control over when they are taxed. Like stocks, there are also avenues to create more intricate position sizes, with no minimum investment required to scale in and out of a position.

Despite the enormous demand for a Bitcoin ETF and the obvious benefits of creating one, multiple firms have repeatedly attempted and failed to launch one over the last decade. Founders of the U.S.-based cryptocurrency exchange Gemini and the world’s first Bitcoin billionaires, Cameron and Tyler Winklevoss’ petition to launch the ‘Winklevoss Bitcoin Trust’ Bitcoin ETF was turned down by the SEC in 2017.

The reason cited for the SEC’s denial was that Bitcoins were still traded largely on unregulated exchanges, which left them susceptible to fraud and market manipulation. However, the Winklevosses did not give up, and in June 2018, the U.S. Patent and Trademark Office awarded the duo with a patent for their Winklevoss IP LLP firm for exchange-traded products (ETPs).

However, the twins were far from the only ones playing the Bitcoin ETF game with the SEC. Global investment manager VanEck and fintech solutions firm SolidX announced their plans for a VanEck SolidX Bitcoin Trust ETF fund targeting institutional investors in 2018. According to reports, the XBTC was designed to track an index related to a group of reputed Bitcoin trading desks to alleviate some of the SEC’s concerns and would open with a share price of $200,000.

Despite having first applied for a Bitcoin ETF in 2016, amending their proposals repeatedly over the years since, the largest cryptocurrency trust in the world, Grayscale Bitcoin Trust, with nearly $40 billion in assets under management, has also failed to receive approval from U.S. regulators. Grayscale plans to convert the trust into an ETF as soon as possible, but they’re still quite popular among investors looking for a more risk-averse entry into cryptocurrencies.

However, there is a price to pay for that peace of mind – last year, investors in the Grayscale Bitcoin Investment Trust paid an average of an 18% premium on spot prices, and this premium has historically risen as high as 132%. In recent years, Grayscale’s lowest premium has been 3%, which might be too high a cut for some investors, especially since ETFs are supposed to trade very close to the price of the underlying asset. But, there are also times when the GBTC premium dips below the spot price. In fact, right now, the GBTC premium is at -9.74%. The causes of the negative premium could be attributed to the fact that there are now Canadian ETFs available.

While the United States has seen some friction against starting a Bitcoin ETF from regulators, the world’s first Bitcoin ETF was launched in February this year in Canada. In just two days of its launch, the ETF saw $400 million in trade volume, and as of April, nearly 17,000 BTC worth of the ETF has been sold, a sharp rise from the sub-10,000 BTC reported a month prior.

Outside the U.S., over 20 cryptocurrency ETPs exist, with most of them catering to European investors. Exchange-traded notes like the Bitcoin Tracker EUR have been introduced in Sweden as early as five years ago, and they usually trade at insignificant premiums to spot prices.

The earlier mentioned Bitwise report also shows that 65% of people surveyed would prefer to invest in an exchange-traded fund, an overwhelming proportion compared to the 16% who said they prefer direct ownership. While the percentage of users that preferred directly purchasing Bitcoin remained largely the same, the demand for ETFs rose from 62% since the year before.

The SEC has approved arguably more dangerous investment vehicles in the past, especially in terms of volatility. In fact, there are around 70 ETFs in the United States that present higher volatility levels than Bitcoin. For example, the Direxion Daily S&P 500 Beta Bear 3X Shares ETF has a 60-day standard deviation of between 100% and 200%, while Sweden’s Bitcoin ETP’s standard deviation is only between 25% and 100%.

The real issue lies in the maturity of the cryptocurrency space and whether it has the infrastructure to meet the requirements of regulators in the United States. According to Cathie Wood, CEO of Ark Investment Management, the SEC may not be comfortable approving a Bitcoin ETF until they see $2 trillion in demand.

While there are many advantages to owning a Bitcoin ETF, there are also some disadvantages. One of the disadvantages is its high management fees, which can add up to large sums over extended periods. Since there is the possibility of a price difference between the ETF and the spot market, there can be inaccuracies in its market value due to discounts, premiums, and net asset value.

Bitcoin ETFs would also operate centrally, which flies completely in the face of what blockchain technology was created to achieve. ETFs also limit investors to profiting from Bitcoin alone, where directly investing in a diversified portfolio of tokens including altcoins like Ethereum and Polkadot could bring more stability and profit potential to the fund.

Is there an Ethereum ETF?

However, as the popularity of cryptocurrency-based ETFs continue to rise, and with how ETFs are generally tasked with offering a diversified investment opportunity into niche sectors, the likelihood of a diversified crypto-ETF or even a DeFi ETF is ever-increasing.

The average investor today is capable of understanding the risks of investing in a Bitcoin ETF. Cryptocurrencies are known to be notoriously volatile and somewhat experimental in their approach to financial applications, but while introducing an asset without proper safeguards can be highly destructive to an economy, the potential benefits could be limitless.

Not only will investment from large institutions bring more resources into the blockchain industry, but a Bitcoin ETF could even make digital asset marketplaces significantly more efficient. With a proven track record in other countries and institutions continually pushing regulators to take a stance, a Bitcoin ETF could very soon be on the way to the United States.