Fantom vs Solana vs Avalanche vs Near Protocol: Which Is the Best Investment?

Fantom (FTM), Solana (SOL), Avalanche (AVAX), and Near Protocol (NEAR) are blockchains aiming to become the dominant DeFi (decentralized finance) platform. We will be analyzing metrics such as price-performance, total value locked, consensus protocols, decentralization, and others to determine which one presents the best investment opportunity.

These blockchains have more in common than they do differences because they’re all based on Proof-of-Stake (PoS), except Solana which uses Proof-of-History (PoH). The networks are decentralized by validators who stake their coins in exchange for block rewards. Validators with larger stakes are allowed to produce blocks. On Proof-of-Work (PoW) chains such as Bitcoin (BTC), miners solve mathematical equations to produce blocks.

These chains all compete with Ethereum (ETH) for market share in the DeFi industry. Ethereum is the dominant DeFi network that brought smart contracts and allowed users to build tokens on it. However, it faces problems such as network congestion and high gas fees. Ethereum aimed to solve this by moving to PoS in Ethereum 2.0, but these chains have already made significant developments and won sizeable market share. 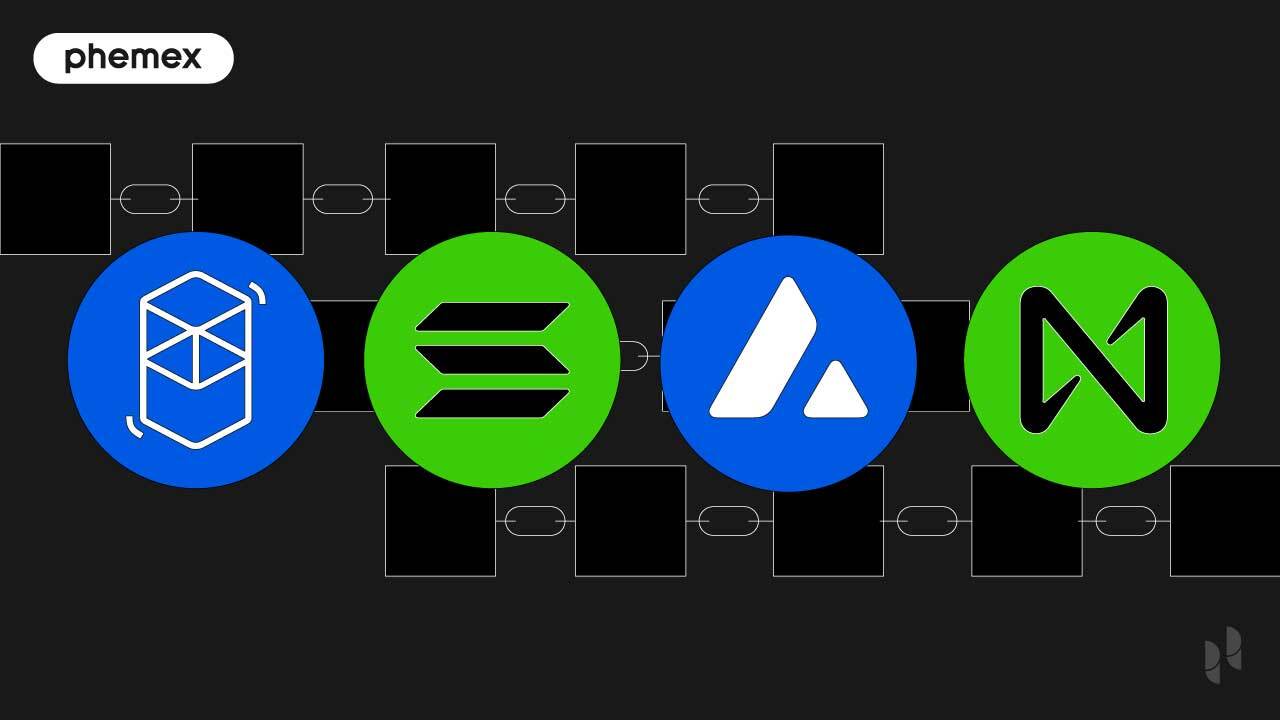 Fantom vs Solana vs Avalanche vs Near Protocol: At A Glance

The showdown among the largest “Ethereum killers” can start by summarizing the most important information a user needs to invest in a coin. We’ve compiled a table that contains statistics such as price-performance, TVL, market cap, staking rewards, and transaction speed.

Despite all of these networks running on PoS except Solana which is PoH (Proof-of-History), there are massive differences in the total number of validators, the percentages staked, the TPS for scalability, and market cap. These are all metrics that can help a trader decide which one will provide the best returns in the future.

6 Metrics Comparing Fantom vs Solana vs Avalanche vs Near Protocol

Price performance, the main concern for investors seeking ROI, can be analyzed using YoY data However, YoY data may be misleading asprices of altcoins are strongly correlated to the price of Bitcoin. The last Bitcoin bull run started in late 2020; some of these coins peaked in early 2021 while others peaked in late 2021.

Therefore, we should measure how these coins performed from late 2020 until 2022 by taking average prices from the bear market and comparing them to current prices in the bull market. The ROI of the coins from the last bear market to the present moment is the following (ranked): 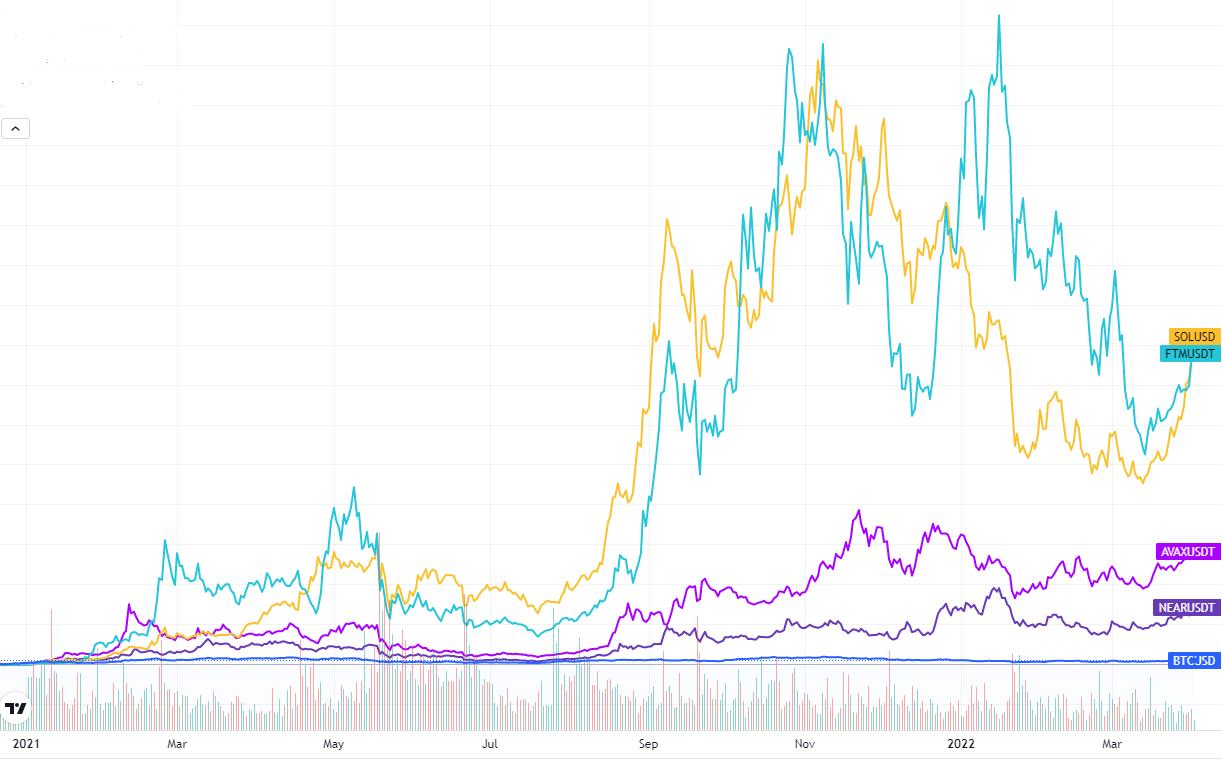 The two-year price performance of SOL, FTM, AVAX, NEAR, and BTC.

Solana and Fantom are winners in terms of price performance and have provided returns in the 100-200x range over the last two years. They both surpassed returns compared to Avalanche and Near Protocol for average investors (i.e. not insiders). The TradingView chart above shows Bitcoin’s miniscule ROI compared to these altcoins over the same time period.

Note that these estimates can be skewed. Solana was trading at $250 at some point last year which would mean the returns for early investors could have been higher than 140x. However, we’re basing our ROI estimates off the current spot price compared to the pre-bull run average.

The returns on some coins such as Avalanche may seem low compared to Solana or Fantom, but they were likely higher for early ICO (Initial Coin Offer) investors who purchased AVAX for cents on the dollar before it launched.

The historic ROI performance of coins does not guarantee that they’ll keep providing the same returns in the future. The larger the market cap of a crypto, the more money has to be invested to move the price. Bitcoin has a $1 trillion market cap which is harder to move than altcoins with a lower market cap.

While Solana is a top performer, it is also larger than the rest by market cap at $45 billion. This means that if Solana were to go up 1000%, the market cap would effectively reach $450 billion. Coins such as Fantom with a market cap of $4 billion stand a much higher chance of providing higher returns in the short-term.

If we compare Solana vs Avalanche for transaction speed and fees, the differences are miniscule. Users should not take TPS (transaction per second) claims at face value because most networks haven’t been stress-tested for hundreds of thousands of transactions.

Solana claims 65,000 TPS while Avalanche claims 4,500 TPS. However, the crypto industry has not evolved to a point of mainstream adoption where these blockchains would require such large transaction amounts. MasterCard and Visa (networks that power the global financial system) have 5,000 and 1,700 TPS respectively.

The average block time is 400 milliseconds for Solana, three  seconds for Avalanche, one second for Near Protocol, and one second for Fantom. This means that Solana hasthe fastest settlement times compared to those of traditional payment services such as Visa or MasterCard.

Proof-of-Stake blockchains receive criticism that they’re centralized compared to Proof-of-Work blockchains because the coins are pre-mined at the start and distributed among a set of insiders who are allowed to become validators and control a large share of the network.

Solana is the most decentralized of the lot with over 1,680 validators that have the ability to produce blocks. It is followed by Avalanche with 1,350 validators. Fantom and Near Protocol are a lot more centralized by comparison with only 100 and 65 validators respectively. If we compare Fantom vs Solana, we can conclude Solana is almost 30x more decentralized than Fantom with its vast validator set.

The DeFi industry is worth $200 billion in 2022. Decentralized finance is built on decentralized applications (dApps) such as decentralized exchanges (DEXs), borrowing/lending services, yield aggregators, NFTs (non-fungible tokens) and other technologies.

Each one of these blockchains has a sprawling DeFi ecosystem and it is difficult to measure which one looks most promising. The “Total Value Locked” is a measurement for the amount of money locked in a DeFi ecosystem. It can give us an indicator as to the user engagement and trust in the system as a whole.

According to DeFi aggregator DeFi Llama, the leading ecosystem is Avalanche with $11 billion TVL, Solana with $8 billion TVL, Fantom with $7 billion TVL, and Near Protocol with $1 billion TVL. This indicates that Fantom has the largest DeFi ecosystem proportionate to its market cap. Fantom is 10x smaller than Solana by market cap ($4B vs $45B) but its DeFi TVL is almost 90% that of Solana’s.

EVM (Ethereum Virtual Machine) computability is a big factor that affects interoperability. The EVM is the smart contract technology that powers Ethereum and allows users to launch ERC-20 tokens on top of the blockchains and trade with wallets such as MetaMask on DAPPs.

Avalanche, Fantom, and Near Protocol are EVM-compatible while Solana is not EVM compatible which means users need a completely different toolset if they’re coming from Ethereum.

If we compare Fantom vs Avalanche for DeFi trading, the average user would hardly notice a difference because they would only have to switch the network and use the same wallet addresses and private keys. Solana is vastly different and has a learning curve attached to it.

Staking is a core component of PoS networks because users lock up their coins to decentralize the network and receive rewards. Avalanche and Solana lead the way in total percentage of supply staked. If more of the supply is staked, this means users believe in the longevity of the network and are willing to risk locking up their coins in exchange for rewards.

According to DeFi aggregator Staking Rewards, Solana is a clear winner with 75% of the entire supply staked, followed by Avalanche in second place with 54%. Near Protocol comes third with 40% and Fantom comes last with 34%. These percentages are all higher than Ethereum 2.0 stakes that currently amount to 9% of the Ethereum supply.

Users who plan to HODL and stake their coins for the long term will benefit from higher yields on their stake. The average yearly staking rewards for Near Protocol are the highest at 10.5%, followed by Avalanche at 9%, Solana at 6%, and Fantom at 4%.

Solana vs Avalanche vs Near Protocol vs Fantom Foundations

Spend some time in the world of crypto and you’ll notice many of them have “foundations.”These foundations are typically the investment arms of various blockchain companies dedicated to growing their DeFi ecosystems by investing money in promising projects. All four of these blockchains have invested nine-figure sums in their DeFi ecosystem to stimulate projects and increase engagement on their dApps. Solana is backed by the Solana Foundation and Alameda Research. Alameda Research has over $30 billion in liquid assets on its balance sheet and does more than $5 billion in daily trading, which means Solana has the largest financial backing and development war chest. This is reflected in its $45 billion market cap.

Avalanche follows close with Ava Labs having raised $300 million from VC investors for the Avalanche ecosystem. It was founded by renowned professor Emin Gün Sirer from NY’s Itacha University and one of the most respected developers in the crypto sphere.

Fantom and Near Protocol have sizable foundations, but they have focused a lot on stimulating their DeFi ecosystems. Fantom launched a $300 million DeFi initiative and this is reflected in its large TVL proportionate to their market cap. Fantom was backed by Andre Cronje, one of the most renowned DeFi and Ethereum developers who developed dApps for Fantom until his resignation in 2022.

To repeat, Solana, Avalanche, Fantom, and Near Protocol have more in common than they do differences. They run on similar algorithms with fast transaction speeds, low gas fees, and boast thriving DeFi ecosystems. Each one of them has provided higher ROI than Bitcoin over the last few years. If a trader made a blind choice and held any one of those coins since 2020, they would likely end up profitable.

However, Solana seems to be the main contender that could actually take on Ethereum with its large market cap and backing. Fantom is the most undervalued at a $4 billion market cap and a large, promising ecosystem that measures similar activity to Solana’s chain. Avalanche and Near Protocol have growing TVL and high development activity on their DeFi ecosystems.

The bottom line is that all these Layer 1 blockchains offer similar technology and the only way to decide which one to invest in is to personally try out their services and make your own decision. The coins are all listed on Phemex’s spot trading and futures markets. If you want to get started, sign up for a free account and pick up some trading tips and strategies in our beginner’s section.