Home > Tips & Tricks > Comic Books Are Going Digital & Venturing Into NFTs: What Does It Mean? >

Comic Books Are Going Digital & Venturing Into NFTs: What Does It Mean?

Even though NFTs have only been in the spotlight for less than a year, they have already impacted many industries, ranging from sports, gaming, advertising, shopping, investing, and even the comics and creative industries. In particular, NFTs have disrupted the entire comic-book industry’s network of dealers, conventions, and fans who buy, collect, and trade hand-drawn originals. This is because they give illustrators, creators, artists, story writers, and the like a new source of power, connectivity, and ownership to market their work. 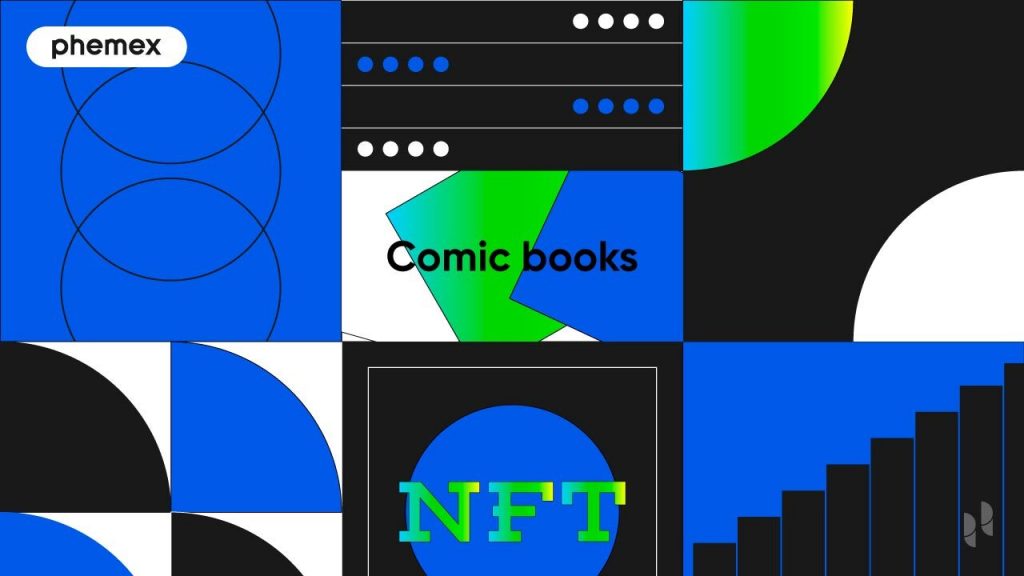 However, these NFT disruptions have also created a stir between the creators and the big companies over IP rights and marketability, and this is only the beginning. As with any industry, there are issues that get wrinkled out over time as the market matures. Nonetheless, it looks like NFTs will give a large boost to the comics, graphic novel, and book industries as it allows the creators, fans, and consumers to engage in new and creative ways.

How Did Digital Comics Become Popular?

Right now in the comic and creative artist industry, more and more artists are being asked to draw digitally, or they are already drawing digitally because it’s how they keep up with the demand. This is also because of the digital tools available to them that are not available on paper.

The Downside of Digital Comics

However, one of the things artists lose in this “digital” process is the ability to sell original artwork. You can sell a file, but the person you sell that file to can just copy and pass it around. When this happens, the market for that artwork falls out. Therefore, in this case, it’s not as relevant and as valuable as getting an original piece or having a piece of paper in hand.

In this “digital” world, artists have experienced their artwork’s originality decrease. As a result, NFTs have become very attractive to a lot of artists. This is because it allows them to go digital while also giving that piece of digital work a level of collectability (similar to an original).

Moreover, artists make more money off of original art than their normal comic rates. This is because comic rates aren’t very great. In fact, the average Comic Book Artist’s salary in the United States is $41,643 dollars as of August 2021, and obviously, this isn’t very high given the amount of pleasure, joy, and aesthetic coolness they give to consumers.

What Are NFT Comics?

Comic book NFTs are, as their name implies, NFTs of the original comic books. How it works is fans or casual readers can own a digital comic book issue by buying an NFT that represents that particular issue. Essentially, digital NFT comics allow for digital “first editions” that have collectible value in the same way that physical first editions have value.

Right now, people can purchase online subscriptions to give them access to all the comic book series of their liking, however, that’s merely a subscription renting model, not an actual ownership agreement. Therefore, it’s not as ideal for collectors or investors.

In August 2021, Marvel dropped its first-ever comic book NFTs in partnership with VeVe, an app that you can get in the Apple Store or Google Play Store. These NFTs are digital copies of Marvel Comics #1, Fantastic Four #1, and Journey Into Mystery #85. After being released, they sold 60,000 copies each of the Marvel and Fantastic Four series NFTs, and 50,000 of the Journey Into Mystery 85. They sold $1 million dollars in gross revenue in less than five minutes.

Interestingly, each digital comic book NFT has five versions of rarity: common, uncommon, rare, ultra-rare, and secret rare; and each level has different comic book features like a classic cover, a vintage variant, a hero variant, a vibranium variant, and a true believer variant. How To Get Marvel NFTs?

On this VeVe Digital Collectibles App, fans can buy and collect a variety of Marvel NFTs, and they can trade and hunt for rare NFT comic books and other collectibles, as well as display their collections on their own customizable virtual showrooms. Therefore, it looks like this partnership that’s bringing the comic book entertainment industry to the digital NFT world will bring a boost to the industry and attract a good amount of new investors looking to jump in and make some money.

However, this process has not always gone smoothly. A former DC comic artist, Jose Delbo created a Wonder Woman gif NFT that he sold for $1.85 million dollars. Soon after, DC Comics reportedly warned artists not to sell their own NFTs featuring DC characters. This suggests that DC is also working on digital artwork NFTs of their own to sell on the market.

Now that Comic Book NFTs Have Hit The Market, What Does This Mean For Comic Store Publishers And Who Is The Potential Market?

The Covid pandemic opened up a new market for digital comics. This is because the virus pretty much shut down both comic book stores and Diamond Classic Comic Distributors.

Now let’s dig into some sales numbers. Of all comic store sales in the United States, Marvel Comics’ dollar sales share in comic stores amounted to 32% of the market in the second quarter of 2021. Ranked second was DC Comics with a market share of 24%. In third was Image Comics with 15% of the market. Hence, it’s mainly Marvel and DC that compete for the top spot each month and who command far larger shares than their smaller rivals. 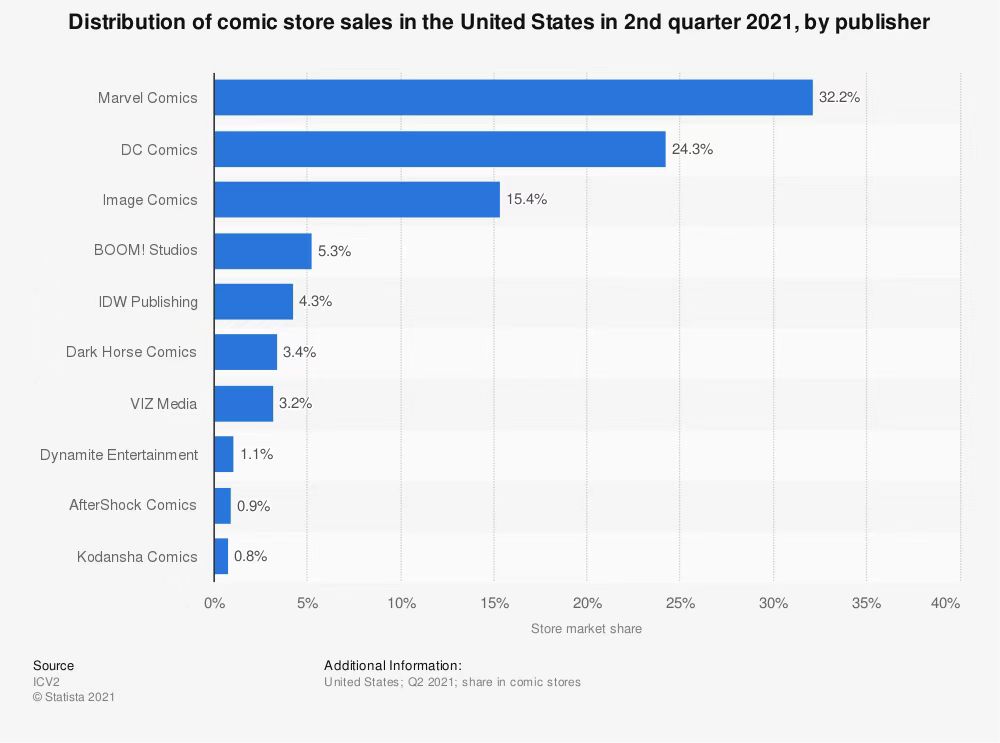 Moreover, in 2019 the revenue from comic and graphic novel sales in North America was $1.2 billion dollars. Therefore, it’s a pretty big industry that has grown since 2013 (when it had $870 million dollars in sales). Although not exponential growth, it has maintained steady growth over the years.

With the introduction of NFTs, we will likely see these yearly sales numbers increase. This is especially the case since digital comic book sales in North America garnered $100 million in 2018, and industry sources say that the industry is growing by 3% to 5% per year.

With regards to the market buyers, comic book collectors, tech nerds, and digital collectibles people are the main targets for this industry.

In an April 2019 survey by Morning Consultant and the Hollywood Reporter, they found that a 33% share of adults in the United States said they are fans of comic books, while 52% said they are not and 15% said they “don’t know or have no opinion.” So that 33% of adults could be a potential market for these digital comics NFT items.

How Can Comic Fans Get Into Digital Comics & NFTs?

At the moment, many of the digital collectibles and comics sold from the likes of Marvel are only available on the mobile app, VeVe.

What Are Crypto Comics?

What has also spawned from this movement to digital comics and collectibles is CryptoComics, which is a community and marketplace for creators and publishers of comics, manga, art, graphic novels, and books.

Essentially, as more and more comics books get released on the blockchain and made available on NFT marketplaces, more and more investors will shovel in and begin participating in this form of NFT collection. If movies and other entertainment made by Marvel and DC stay hot, these forms of collectibles will stay in demand. Then once comics are released only through NFT means and that particular comic becomes an award-winning movie, the demand for that crypto comic will skyrocket even more. As Marvel and DC NFTs flow into the market and become available on various NFT marketplaces, it only makes sense for platforms to create hero coins and Avengers fan coins.

For example, some digital comics creators allow consumers to purchase NFTs that grant them governance rights to decide the results of various plots. This is one idea where hero coins can be relevant. Children, young adults, and other Millenials who are into NFTs, entertainment, and action movies, through their collection and purchase of hero coins can play a role in deciding future movie plots, settings, characters to have epic fights with, and getting rid of characters they don’t like.

Moreover, hero coins and Avengers fan coins can follow the likes of esports platforms and NFT sporting club partnerships where those token holders have the chance to meet their favorite players. In this case, people who have large in-home collectibles of Captain America or Ironman action figures for example, and have an active online presence, can participate in the hero coin economy to win a chance to meet real actors like Chris Evans or Robert Downey Jr.

NFTs have sent the comics industry in a twist, but they have also given the digital comics and graphic novels market a big boost, both for creators and the big companies. The two dominant players Marvel and DC have the foundation and initial partnership and infrastructure to break into the industry, and it will be interesting to see where it goes moving forward. Moreover, artists that actually do the illustrations for the comics themselves will also find new customers and new markets to show off their creations. “NFTizing” comics will be a long process, and there are lots of comics issues still to be minted. Investors and collectors will surely be watching the digital comics and crypto comics space for exciting new releases.