What Is Symmetric Key Encryption: Advantages and Vulnerabilities

Symmetric key encryption, also called private key cryptography, is an encryption method where only one key is used to encrypt and decrypt messages. This method is commonly used in banking and data storage applications to prevent fraudulent charges and identity theft as well as protect stored data. What Is Symmetric Key Encryption?

A key is a random string of binary digits or bits created specifically to scramble and unscramble data. A key’s length and randomness are factors in determining a symmetric encryption algorithm’s strength. The longer and more unpredictable a key is, the harder it is for attackers to break the encryption by guessing the key.

A sender and their designated recipients have identical copies of the key, which is kept secret to prevent outsiders from decrypting their messages. The sender uses this key to encrypt their messages through an encryption algorithm, called a cipher, which converts plaintext to ciphertext. The designated recipients then use the same key to decrypt the messages by converting the ciphertext back to plaintext. For those without the key, the encrypted message would look like a series of random letters, numbers, and special characters. 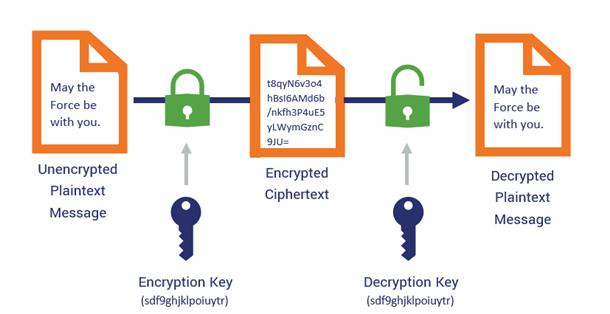 How Does Symmetric Key Encryption Work?

Modern computers don’t store data as alphabetic letters, instead, they keep everything as bits. Every character you type can be represented by an ASCII code, which is a combination of 8 bits.

Plaintext, ciphertext, and keys are all represented as binary digits on the computer. This makes it convenient for ciphers to utilize XOR, the “exclusive-or” logical operation, to encrypt and decrypt binary messages. XOR compares two input bits and generates a single output bit. If the bits in both inputs match, it returns false (i.e., 0). If they don’t match, it returns true (i.e., 1). 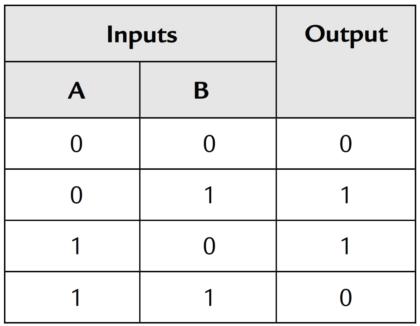 To send an encrypted message, a user would need to take their plaintext message and symmetric key as the input for the XOR. After comparing the two input bits via the XOR, the user will obtain the ciphertext as the output bit. Recipients can decrypt the message by reversing the encryption process. For decryption, recipients take the ciphertext and symmetric key as input for the XOR, and generate the original plaintext.

Example of A Symmetric Encryption

For example, suppose a sender wishes to send a message that consists of the word “Hi”:

What Are the Categories of Symmetric Key Encryption?

This type of cipher breaks down plaintext messages into groups of bits (also called blocks) of predetermined sizes, and encrypts them into ciphertext. Block ciphers normally encrypt block sizes of 64 bits and above, and use keys of a fixed length of 56 bits, 128 bits, 192 bits, or 256 bits. The two most famous implementations of block cipher are as follows:

A stream cipher converts the plaintext in ciphertext bit-by-bit by breaking down plaintext messages into single bits and converting them individually. This cipher relies on a long stream of pseudorandom bits called a keystream. The keystream is generated by providing the encryption key and a seed to an internal algorithm (or keystream generator) which is an internal software. The seed is also called a nonce, which is a unique and randomly generated number that the cipher will use only once. Each message is encrypted and decrypted with different keystreams.

The most widely-used stream cipher is Rivest Cipher 4 (RC4). RC4 keys are 64 bits or 128 bits in size. This cipher is easy to use, fast, and can work with large streams of data. RC4 encryption is used in common web protocols such as Secure Socket Layer (SSL), Transport Layer Security (TLS), and Wireless Equivalent Privacy (WEP). However, RC4 in its original form has severe vulnerabilities and can be cracked with relative ease. Its biggest weakness is its insufficient key schedule, where the first bytes of the output will reveal information about the key. A number of RC4 variants have been developed in efforts to try and resolve this issue, notably RC4A, Spritz, and VMPC.

What Are Symmetric Key Encryption’s Advantages?

What Are Symmetric Key Encryption’s Vulnerabilities?

Symmetric key encryption is a relatively secure, fast, and simple method of encrypting and decrypting large quantities of data without straining servers. Encryption and decryption are achieved using just one key, and anyone who has a key can decrypt all the messages encrypted by it. However, the distribution and management of this key are difficult and may create openings for attackers to steal the key and crack the encryption. Nevertheless, as long as the key is kept secret, symmetric key encryption is extremely secure. As such, it is still used as the standard encryption method of companies and governmental authorities worldwide.