Crypto Gap Trading: What Does Gap Up and Gap Down Mean?

Crypto trading, or all forms of trade for that matter, has a large number of interconnecting facets that allow for the movement of different assets to affect one another. One movement that certainly affects the industry, is the move into all crypto-related matters by the Chicago Mercantile Exchange (CME). This huge endorsement has sent shockwaves across the industry, with a particular effect on those traders looking to use gap trading and its strategies (of which there are many) to make a profit with crypto. Thus, many investors are left wondering several things: A. What is the CME? B. What is gap trading? And C. How do they affect each other and the movement of cryptocurrency as a whole? 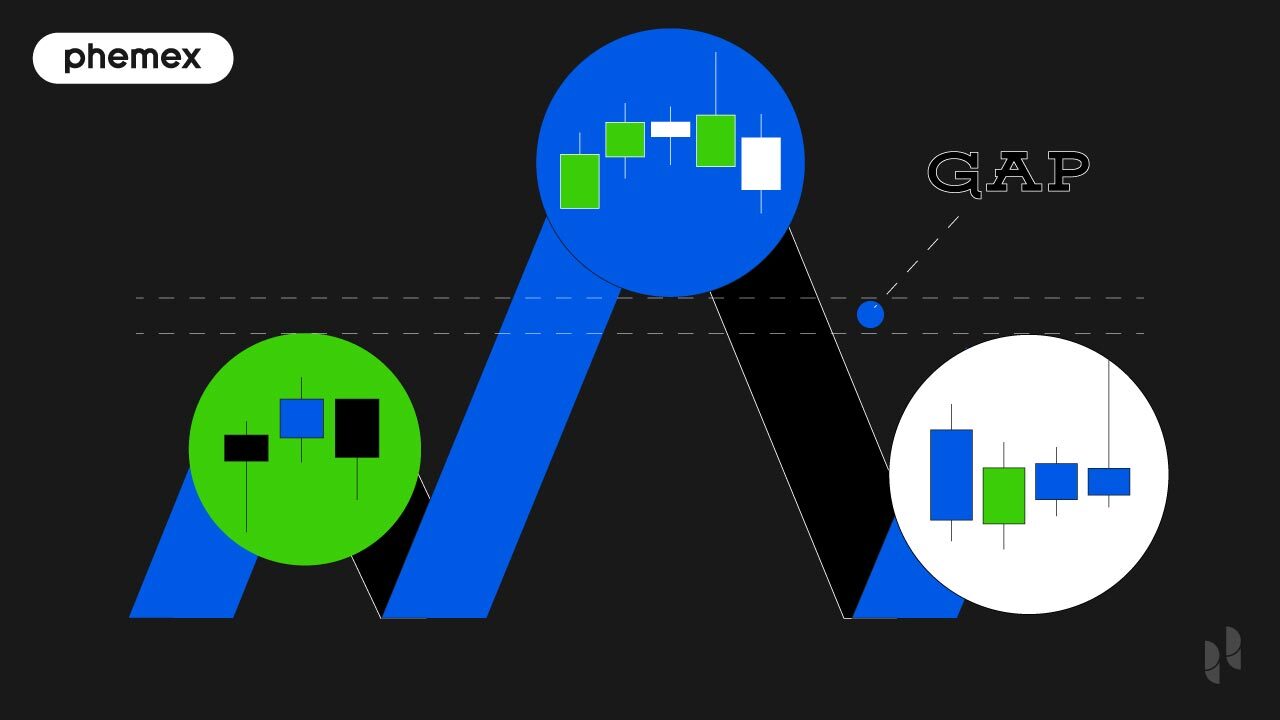 What Are Gaps and Gap Trading?

When using financial charts to study stock (or any other financial instrument, including options/futures) price movements, areas appear where the corresponding price will make a sudden movement up or down. This usually occurs when there has been a period of little, or even zero, trading for or against that asset — causing a rift in the normal flow of a price pattern. These rifts are called gaps. In markets with a high level of volatility, gaps can be exploited by enterprising traders who are adept at interpreting and predicting these movements ahead of time. 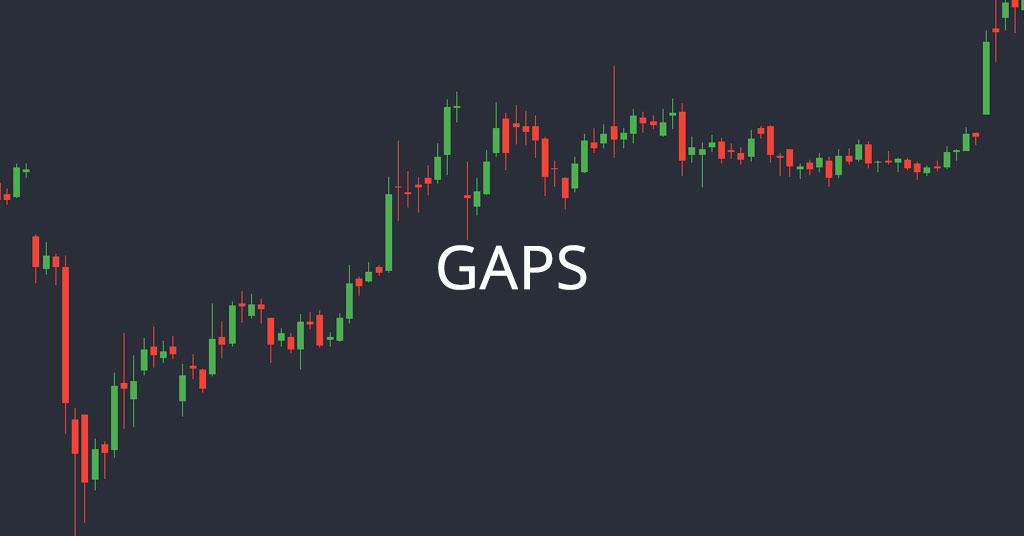 Gap trading represents the many ways that traders have found to take advantages of these gaps, and while some gap trading strategies are more popular than others, there are many to choose from. Most gap trading involves some form of candlestick gap analysis, which refers to the type of financial chart used to identify these market gaps. Candlesticks are price charts that display different stats for any given security during a specific period. When trading using gaps, there are some key things that investors will want to remember; chief among them being that once a stock has started to fill the gap (meaning the price has moved back to the original pre-gap level), it will rarely stop. This is because there is rarely any support or resistance for the asset, which is generally what will have led to the gap occurring in the first place.

What Does Gap Up/Down Mean?

Below is an explanation of certain common terms found in gap trading: 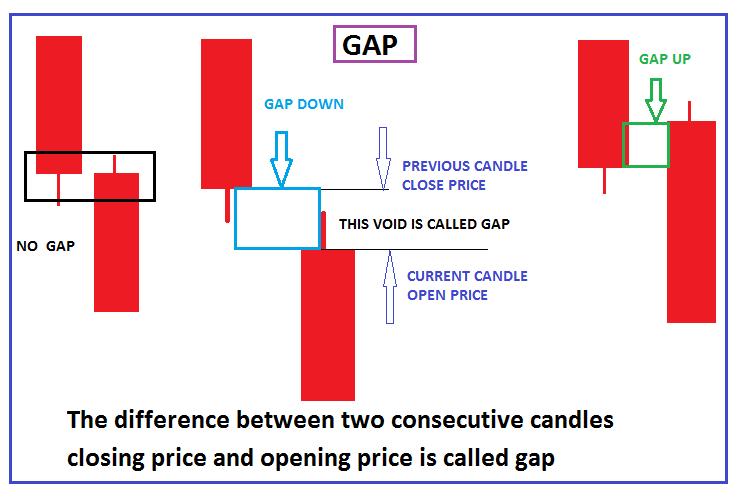 What Are Some Common Gap Trading Strategies?

What’s The Gap and Go Strategy?

The term “gap and go” refers to the fact that the stock is likely to return to its normal price in a relatively short time after the gap has occurred, leaving a small window to capitalize. As is the case with all gap trading strategies, the first step here is to correctly identify when a market gap is likely to form. When a stock gaps up from the closing price of the previous day, a prudent investor should attempt to pinpoint the volume of the asset and the reason why it is gapping up (if possible). When doing this, if the investor is satisfied that this gap up is not an anomaly, and they have correctly identified the gap ahead of time, then it is time to buy in.

Opening gap strategies are any form of gap trading strategy implemented at the open of a market after it has been closed for a determined period of time. Again, the skill is in correctly identifying the gap before it happens, either by analyzing data and spotting precedents, understanding external factors that do not involve trade, or for other, less quantifiable reasons.

Gap up/down strategies are any form of gap trading strategy implemented when a gap up or gap down has been correctly identified. For example, the gap and go strategy mentioned earlier could be referred to as a gap up trading strategy because traders routinely use gap ups to allow them to capitalize by buying in at the right time. Equally, a gap up opening strategy is where a trader identifies and bets on an upwards gap which occurs during the opening price of a given asset, after the market has been closed for a certain period.

Gap up intraday trading strategies have the same meaning as gap up trading strategies, except that they would normally be implemented during a much shorter time period, thereby making it far riskier. This is a commonly used strategy as although market gaps can occur during a trading day for many reasons, they are usually relatively short. This makes correctly identifying and profiting from these fluctuations more difficult. In general, intraday trading strategies are only employed by confident and experienced traders, who have a firm grip on the market they trade in.

Breakaway gaps and runaway gaps are fairly simple to comprehend, especially once understanding some trading gap terminology. Breakaway gaps are basically just extreme versions of gap ups and downs; with a breakaway representing a drastic up-shift between the price of an asset or security, and a runaway gap representing a drastic downward spike (both occurring during a period of little to no trading, as mentioned earlier). These can be extremely advantageous when correctly identified, as the extreme price movement makes them very profitable.

One body that has a huge impact on gap trading (in crypto and trading in general), is known as the Chicago Mercantile Exchange (CME), or Chicago Merc in the industry. It is an exchange that specializes in the trading of options and futures contracts and anyone using gap trading should know who they are.

Starting out as the “Chicago Butter and Egg Board” way back in 1898, the CME had changed its name by 1919 and launched its first futures contracts by 1961. In 2000, the CME became the first company to demutualize, which is basically a process by which private companies can change their structure, in order to become a publicly traded company owned by shareholders. By 2007, they merged with the Chicago Board of Trade to create the CME Group, the next year acquiring NYMEX Holdings, Inc., parent company of the New York Mercantile Exchange (NYMEX). 2010 saw the CME purchase a 90% interest in Dow Jones stock and financial indexes, growing again in 2012 with the purchase of the Kansas City Board of Trade. They are, in short and without question, one of the largest financial exchanges in the world, with the approximate annual value of their contracts totaling an incomprehensible $1 quadrillion. In fact, it was once described by The Economist as “The biggest financial exchange you have never heard of.”

The CME has been known to deal in all kinds of different sectors: energy, agriculture, interest rates, stock indices, foreign exchange, weather, metals, and real estate. However, they have now found a new sector in which to invest. That sector is cryptocurrency, and while the CME began trading Bitcoin futures way back in 2017, it is only relatively recently that they began to realize and capitalize upon the full potential the crypto market has to offer. Gap trading represents just some of that potential.

What Does CME Gap Trading Mean For Cryptocurrency?

Now that who the CME are (and what gap trading is) has been explained, it should be fairly easy to understand how and why the CME affects both gap trading and crypto in a large way. The CME has massive holdings and dealings with Bitcoin, and the CME strategy guide dictates that the company does not trade on the weekends. This means that the CME routinely causes gaps in the Bitcoin market, as the trade of cryptocurrency is usually a 24/7, 365 days a year occurrence. Thus, the difference between the closing price on any given Friday and the opening price of any given Monday creates a large gap in the CME chart. With gap trading being so profitable when done correctly, investors would be borderline foolish not to attempt to exploit these gaps in crypto caused by the CME.

When traders talk about gaps, they often discuss whether they need to fill them (meaning move back to the original price before the gap occurred). This is true of traditional markets, as not all gaps fill — something that can work out well as there are many trading strategies built around this contingency. However, a case study discussing CME crypto gaps was published and posted on Twitter back in 2020 that suggested an extremely high percentage of CME Bitcoin gaps fill fairly consistently. The study concluded that CME Bitcoin gaps do affect the price action of Bitcoin and that learning to use them as part of an analysis was an extremely prudent move for regular BTC investors. Despite this, according to the study, basing a strategy around taking trades is generally not profitable, even though the data suggests that 95% of gaps do fill.

There are many different forms of gap trading and each one is suited to different needs, markets, asset classes, and stressors, among others. However, if an investor does not have a good understanding of how to read market indicators, charts, and prices analyses then they run the risk of losing out and failing to capitalize when using these strategies. In order to use gap trading effectively and have a thorough grasp of the market in which they operate, these traders (and crypto traders in particular) must follow the movements of industry giants such as the CME, or risk being crushed by its movements. To a greater or lesser degree, volatility is an issue in every market and thus understanding how to profit, or at least minimize loss during these volatile periods is paramount for any skilled, professional investor.