The Curve Wars Explained: What & Why?

DeFi is the most established application of blockchain and Web3 technology. Besides alleviating the pains of traditional finance, it’s also a playground for innovative financial models. One such model is Curve Finance, which changed the game for various DeFi projects, attracting billions of dollars in liquidity to its native token pools. The catalyst of this change was the tokenomics of CRV (Curve’s native token), which created a competitive and gamified incentive structure.

Curve Finance is a decentralized exchange that devised an efficient way to swap stablecoins while avoiding slippage costs. This efficiency attracted users to swap between stablecoins DAI, USDC, and USDT, famously called the 3pool. 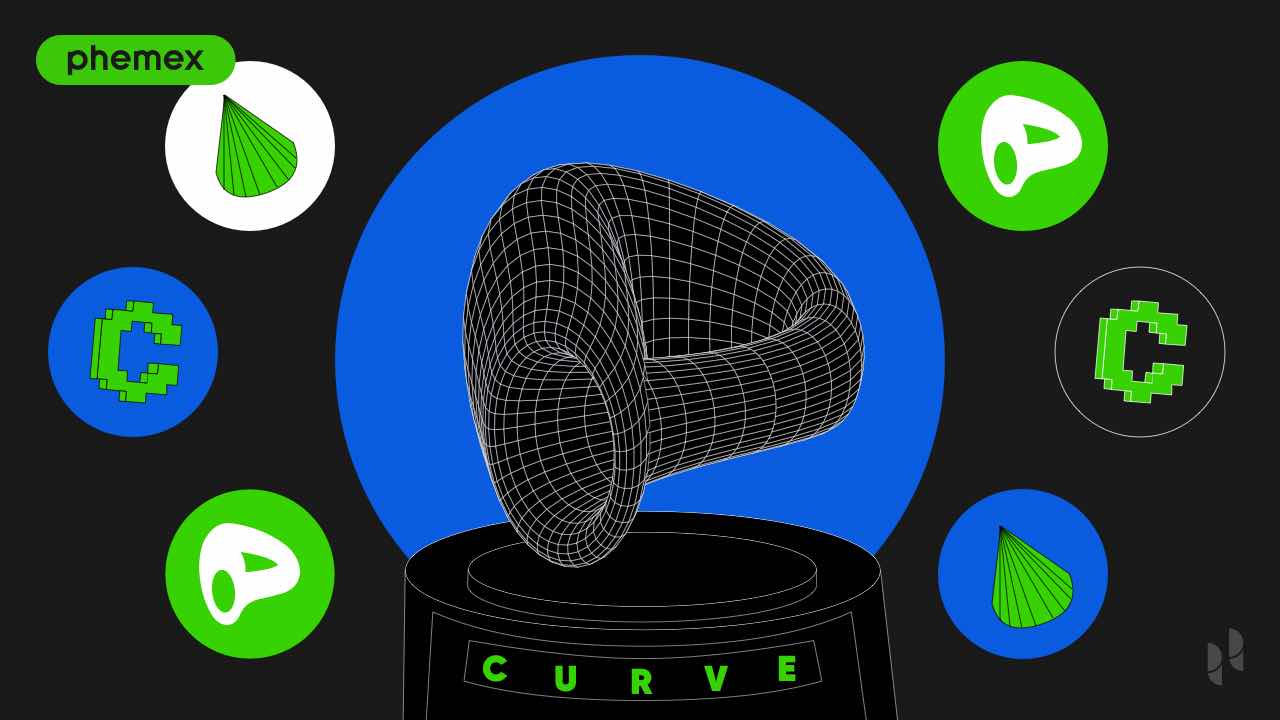 Users of the pool were excited, but where would the supply-side liquidity come from? On Curve, anybody can supply liquidity to the pool by offering their DAI, USDC, and USDT for users to trade – in exchange these ‘Liquidity Providers’  would receive rewards in the form of incentives.

LPs are incentivized to supply liquidity through half of the 0.03% fee levied on the users and emissions of $CRV tokens.

In the Curve pools below, you can find the stablecoin 3pool which currently offers 0.25% (Base vAPY), which is the earnings from the trading fees (half of 0.03% on total volume traded). Above that it offers 0.22%-0.55% (Rewards tAPR) earned in the form of CRV tokens.

This reward system is not new to crypto and many decentralized exchanges incentivise liquidity by distributing trading fees and native tokens. What makes Curve unique is the vote escrowed CRV or veCRV model (which follows). 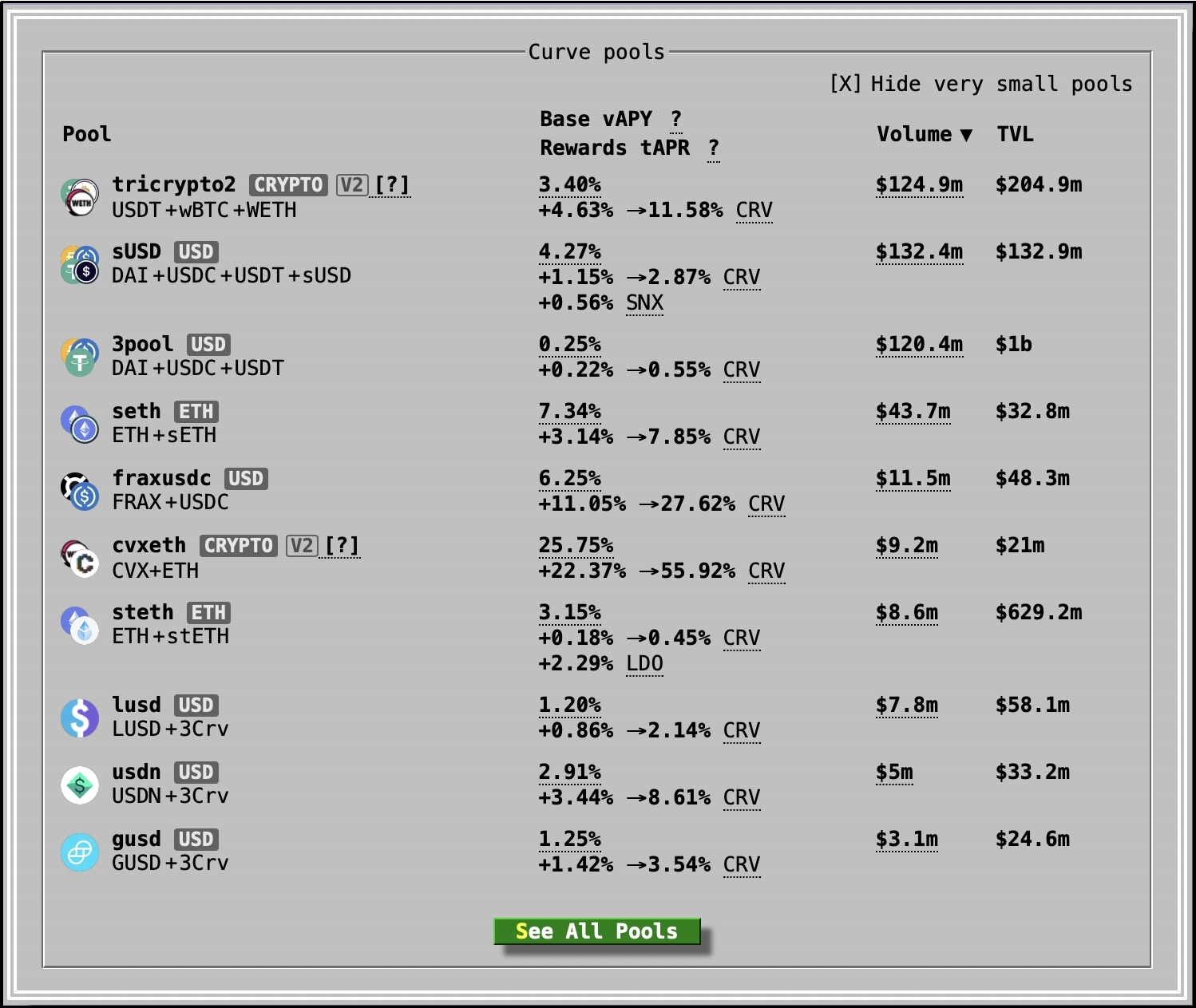 The CRV reward is not an incentive if CRV has no value. In Curve’s model, CRV reigns supreme because of veCRV’s utility. Simply put, veCRV is an ERC-20 token that isn’t tradeable or transferable. CRV is a tradeable and transferable ERC-20 but does not have any utility of its own – one must earn or buy CRV because veCRV can only be obtained by locking up CRV.

But for projects with a native token, this means war.

The Curve Wars is where the above tokenomics comes into play on a macro scale. It’s in every projects’ interest to make their token as liquid and easily available for exchange as possible in the marketplace (Curve Finance in this case). Most projects reward liquidity providers with their native token, but this can get expensive and isn’t always lucrative. With Curve, liquidity can be incentivised by getting a higher yield of CRV rewards if the project has enough veCRV.

This fight for yield by acquiring veCRV is what is famously called the Curve Wars. These wars now have layers of various protocols streamlining the process while eliminating the shortcomings of CRV’s tokenomics. Additionally, over time the war is unanimously believed to have shifted to Convex Finance, which has attracted the majority of CRV tokens.

Convex has emerged as a leader in the Curve Wars, but with a different motive. While many projects’ goals are to attract liquidity for its pool, Convex is a layer on the Curve model that makes it easier for retail users to earn by providing liquidity.

On Curve Finance, you can lock $CRV to boost your rewards and earn trading fees, but the veCRV amount required for locking, and the locking period of 4 years is incredibly prohibitive to smaller investors. This is the gap Convex fills, aggregating CRV from all liquidity providers to deliver the maximum yield. 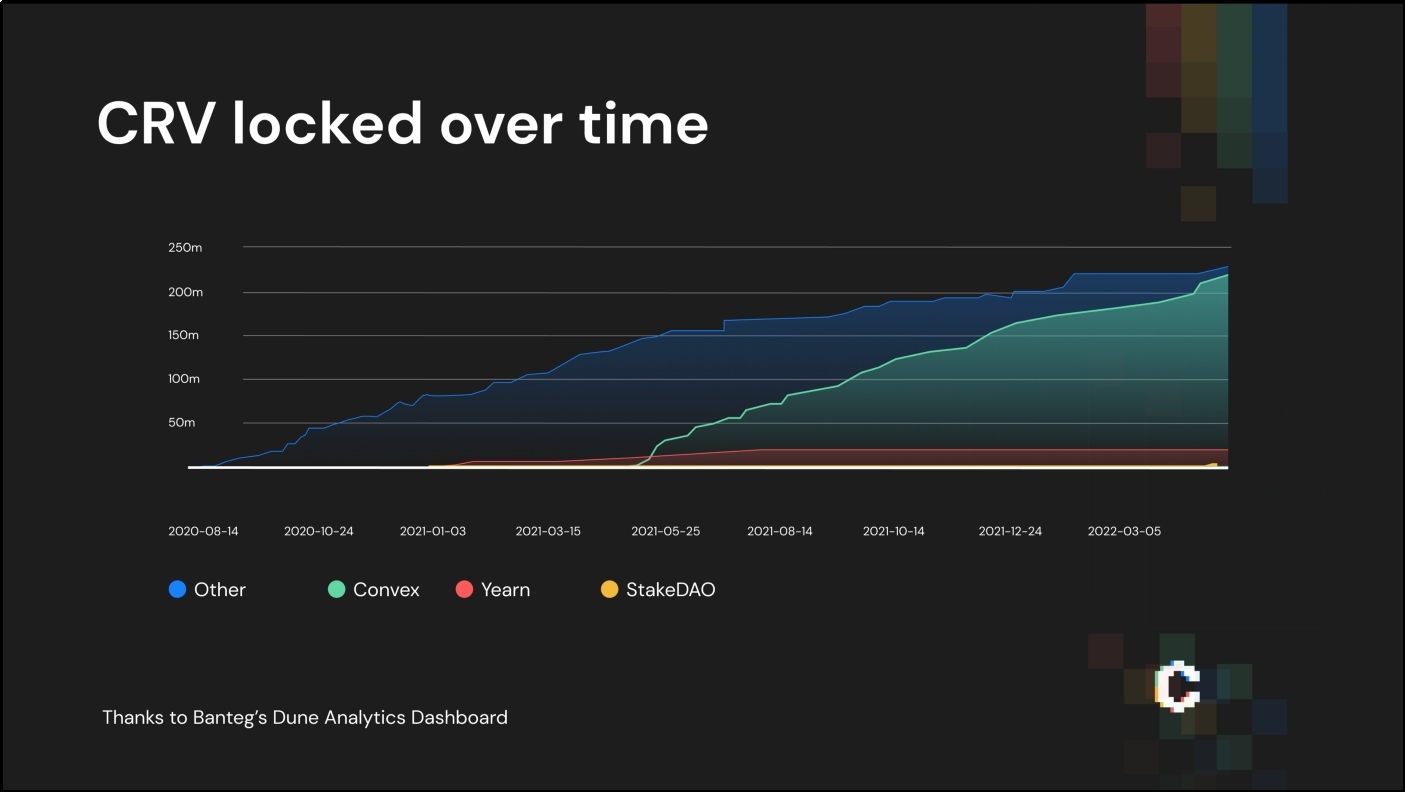 Beyond this, every CRV token staked is exchangeable for cvxCRV on Convex, making the Curve token liquid unlike the 4 year lock-in on Curve. This made Convex the go-to choice for people that couldn’t buy a lot of CRV for maximum yield, or bear the lost opportunity cost of locking up tokens for 4 years. It’s not surprising that Convex now has a $146 million TVL (total value locked) in CRV – more than half the circulating CRV supply.

Upon staking CRV on Convex, cvxCRV is issued, which can be staked for all the benefits that a liquidity provider gets on the Curve platform while also receiving CVX tokens as a reward. The battleground for the Curve wars changed here. Convex Finance now commands a majority share of CRV tokens and can single handedly influence governance proposals to maximize yields on Curve pools.

However, as you can guess, Convex Finance also has a DAO voting structure where CVX can be used to vote on how Convex should put its veCRV to use. These decisions are then executed by Convex on Curve’s DAO through votes. For protocols who want more liquidity on their token, it now makes more sense to acquire CVX tokens instead of CRV tokens. ‘Bribes’ to CVX holders have also become a popular method to add liquidity, and thus we can conclusively say the Curve Wars are now being fought on Convex’s turf.

The Spoils Of War

There are more warriors fighting for the CRV pie including StakeDAO, Abracadabra, and protocols like Votium that are building on top of Convex to bring peace to the Curve Wars. While ‘wars’ and ‘bribes’ aren’t much to cheer about, for crypto nuts they’re akin to goldmines.

A two year old project called Curve shook the mechanics of liquidity in crypto forever. New projects are continuously adding value, and at the center of it are the people calling the shots through DAO governance. If this still isn’t the decentralized finance we’re building towards, it certainly is a step in the right direction.