As crypto-mania has swept the globe attracting both first-time and veteran investors alike, many are beginning to open their eyes to the wide-range of opportunities digitalization can hold. Gone are the days of cryptocurrencies being used solely for anonymous and illicit purchases, as more and more capitals around the globe begin to explore this new realm of finance for themselves, particularly in the form of central bank digital currencies (CBDCs).

CBDCs act as essentially a digitized issuance of a nation’s currency, holding the same pegged value as fiat notes. They would be issued directly by the central bank and regulated by traditional monetary authorities. CBDCs are lauded as a means for simplified transactions with greater speed, efficiency, and cost as compared to traditional arrangements.

Despite this potential, many countries are being careful to take measured steps, gradually testing or rolling out such systems to ensure stability and control. With China’s launching of the Digital Renminbi in 2021 marking the first case of a major economy to roll out its own CBDC, many others look destined to quickly follow suit. Even the US Federal Reserve (Fed), the world’s largest Central Bank by total assets, is now looking to join the fray, exploring the possibility of a future United States CBDC as well.

Despite the fanfare in recent years over the explosion of Bitcoin and other cryptocurrencies, the idea behind CBDCs is not new. Long looking to insulate itself from the United States’ control over digital payments within SWIFT, China had been developing its own ‘digital yuan’, referred to as the Digital Currency Electronic Payment (DCEP) since 2014. Even as early as 2017, major regional banks across China began to jointly develop DCEP, with testing in major cities shortly thereafter in 2020. Ever careful, Chinese authorities are now poised to continue a gradual expansion of the system, hoping to one day replace cash transactions entirely.

China wasn’t the only country early to the party however. From 2014 to 2018, Ecuadorian authorities rolled out their own pilot retail CBDC, but were forced to shutter the program following only limited public usage. Others, such as France and Switzerland, have instead opted for a more defined route, agreeing in 2021 to launch a cross-border CBDC payment trial between major banks rather than regular consumers. 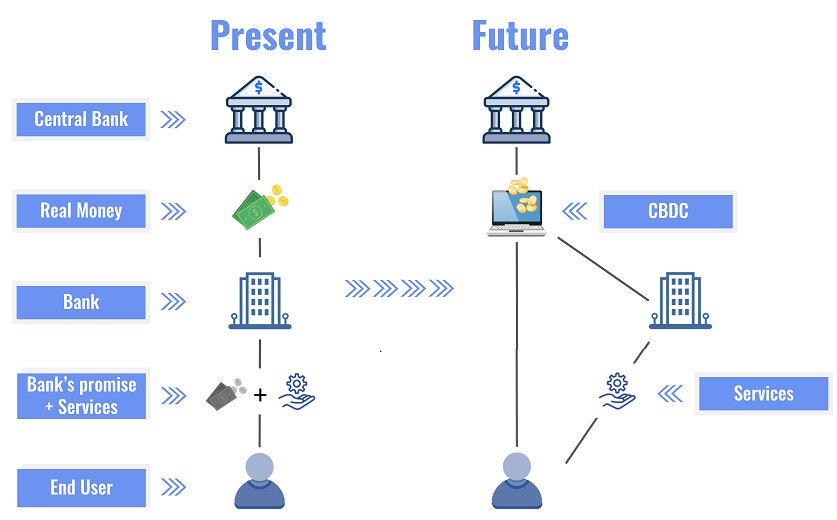 (Source: flow chart for developing CDDCs and their role in the economy)

Following in China’s footsteps, the world’s other most populous country is looking to wade into the pool as well. Beginning in 2017, Indian officials began exploring the possibility of a CBDC, though the idea was not more prominently considered until 2020-2021. That said, in the face of public unease and conscious of the country’s weaker institutions as compared to China or the US, Indian officials have been taking careful steps, such as Finance Minister Nirmala Sitharaman’s recent announcement of plans for the release of a Digital Rupee CBDC sometime in the coming fiscal year, but going to great lengths to stress publiclly that this would be centralized in nature unlike more traditional unregulated crypto currencies in order to stay in line with national money-laundering and anti-terrorism regulations.

The Reserve Bank of India Deputy Governor T Rabi Sankar similarly attempted to distance the CBDC from traditional crypto stating, “cryptocurrencies are not definable as a money, asset, or commodity; they lack underlying cash flows and inherent value; and they resemble Ponzi schemes.” The extent of India’s roll out thus remains to be seen, though New Delhi is likely keen to stay on pace with Beijing amidst growing regional rivalry.

What About The United States Digital Dollar?

In Washington, opinions are divided. In March of this year, President Joe Biden signed an executive order directing the Fed to begin urgent research and development of a possible US CBDC. This could include potentially multi-country experimentation, and the positioning of the US as an international leader in CBDC development, promoting the country’s values, standards, and norms. In the view of the Fed, one of the potentially more attractive luxuries provided by a CBDC is the impact on monetary policy. With the ability to more rapidly and directly exert influence on monetary supply, the Fed would have greater capacity to stabilize the nation’s economy in times of economic hardship or shock. This could help mitigate future financial crises, and allow policy makers to take action before more dire effects can take place. With this said, like elsewhere, this would likely be a gradual process with roll outs and testing over many years. Early stages could revolve around internal or bank to bank transfers, with wider use by the public still a long ways off.

However, not everyone is so optimistic. Following the announcement, Federal Reserve Governor Christopher Waller, nominated for the role by then-President Donald Trump in 2020, criticized the idea of digitalization, arguing that cryptocurrencies, “aren’t payment instruments at all,” and that in his opinion, “Blockchain is totally overrated.” Politicians on both sides of the aisle have further questioned the protection of privacy, and the possibility of civilian surveillance by the US and foreign governments.

Support amongst the US public remains mixed. Pew polling from late 2021 found that nearly 20% of Americans reported having invested in, traded, or used a cryptocurrency. The figure was particularly high amongst men aged 18-29, with over 40% reporting personal usage. Expectations however should remain tapered, as 75% of total respondents reported having heard only ‘very little’, or ‘nothing at all’ about cryptocurrencies at all.

Whatsmore, with the increasingly polarized nature of US politics, one must also consider whether such efforts and research would even be continued were Republicans to retake the White House in 2024. Former President Donald Trump remains a leading candidate in these early stages and has been vocal against similar topics in the past, having in 2019 tweeted, “I am not a fan of Bitcoin and other cryptocurrencies.” While political winds may change and the fact that a CBDC is strikingly different then a typical decentralized cryptocurrency could shift Trump’s opinion, many also recall that in his earliest days as President in 2017 he went to great lengths to reverse major decisions by his rival predecessor.

Despite the mixed views in Washington and across the country, the US will need to remain continually focused on the possibility of further global developments on CBDCs, particularly when perceived rivals such as China continue to establish themselves as global leaders and trendsetters. As we enter a new globalized and digitalized world, capitals around the globe can ill-afford to find themselves caught flat-footed.